At its peak in early May the Coronavirus Job Retention Scheme (JRS) was supporting 8.9 million jobs. As the economy has opened up in recent months take-up of the scheme has been falling, to 4.8 million by 31 July. Of these, 3.5 million (over 10 per cent of private sector employees) were still furloughed in full, with almost 1 million partially furloughed. Our latest estimates suggest that take-up of the JRS in late August was around 3 million, highlighting that while we’re seeing significant numbers returning to work, there is a real risk of a large rise in unemployment as the scheme is phased out over the next six weeks.

The fall in furloughing in July was driven by a 40 per cent reduction (533,000 employees) in the number of retail staff on the scheme. But in hospitality and leisure over two-in-five employees were still furloughed in late July, demonstrating the highly sectoral nature of Britain’s jobs crisis and the need to replace the furlough scheme with new support for the firms and workers most affected by this crisis.

In late July 4.8 million people were furloughed, over 70 per cent of whom were still furloughed in full

Today’s data shows that in total the number of people on the JRS fell by one-third in July, from 6.8 million on 30 June to 4.8 million by 31 July. We do not know how many of these workers returned to work or entered unemployment, but it is likely that the vast majority were brought back to work by their employer as the economy opened up. Separate Real Time Information data from the ONS shows only a small fall in the number of employees in July.

As Figure 1 shows, much of this fall took place on the 1st of the month – showing that calendar months are powerful drivers of HR manager decision making. Our analysis of timely survey data is shown below too, and we estimate that around 3 million people were still furloughed (either fully or partially) by late-August. 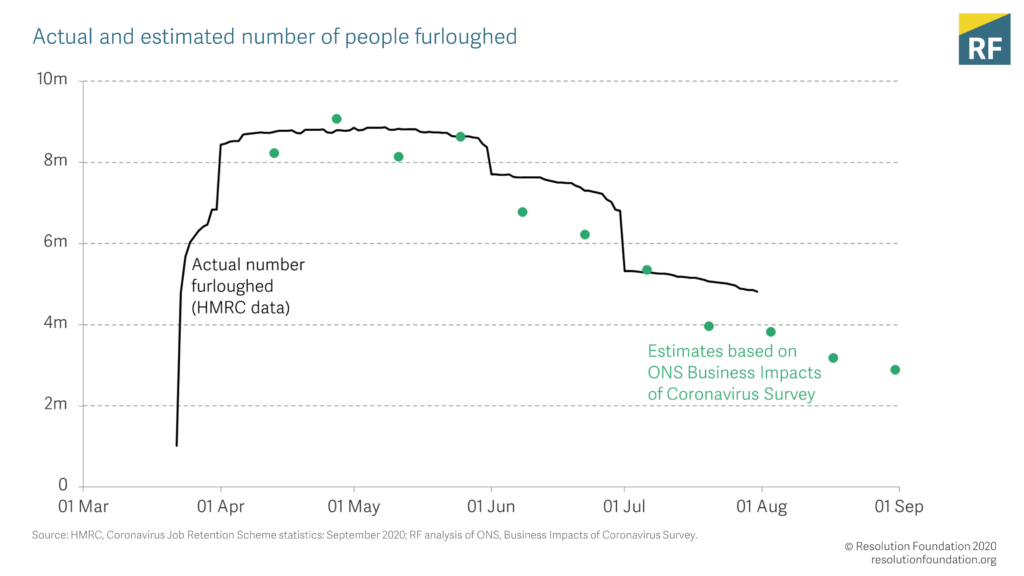 Today’s data also provided us with the first evidence on the take-up of partial furlough, whereby individuals return to work for some of their usual hours but still get paid 80 per cent of their wages for the hours not worked.

We will be watching out for increased take-up of partial furlough in the months ahead. The relatively low usage of this element of the JRS in July may well reflect inertia on behalf of businesses, as employer contributions were yet to kick-in at this stage and so there was no cost push to bring staff back from full furlough. It will also reflect the fundamental challenge for a non-insignificant minority of businesses of being able to operate at anything like normal capacity with current social distancing and wider regulations. For those businesses the realistic options have been to continue with full furlough (now with employer contributions) or begin the redundancy process.

Use of the JRS fell significantly in retail in July

Retail was one of the hardest-hit sectors in the lockdown earlier this year with almost all non-food retailers temporarily closing on government orders. It is encouraging, therefore, to see a large fall in the number of people furloughed in retail in the first full month after ‘non-essential’ businesses in this sector were allowed to re-open.

Over half a million retail employees moved off the JRS in July. Most of these (although we do not know how many) will have returned to work – demonstrating clearly the importance and effectiveness of the JRS. Retail is a large sector, and so it’s no surprise that this is the biggest fall of any part of the economy (see Figure 2). But even in percentage terms this decline stands out; a 40 per cent reduction – compared to a 29 per cent fall across the economy as a whole.

Figure 2: The number of retail employees furloughed fell by more than half a million in July 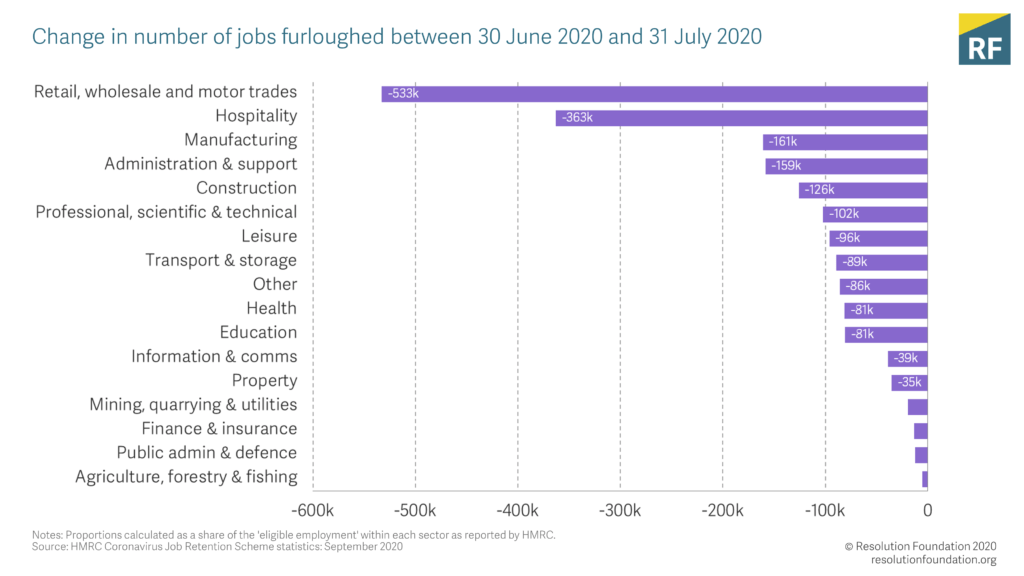 Figure 3: Furloughing rates are highest in hospitality and leisure 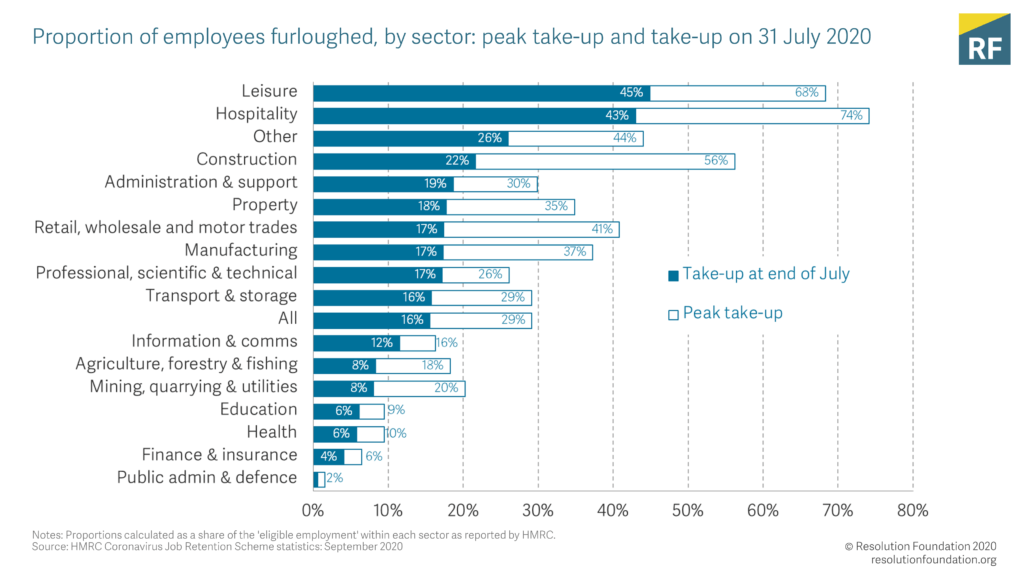 This concentration of usage of the JRS serves as an important reminder of just how sectoral in nature this crisis is. The Eat Out to Help Out Scheme will have undoubtedly supported hospitality in August, meaning that we can expect a sharp fall in full furloughs in part of this sector to have taken place over the rest of the summer. But additional support for firms and workers most affected by this crisis will be needed once the furlough scheme ends in six weeks’ time.