The Covid-19 labour market shock has changed many things, but one little-noticed pre-pandemic trend has continued: a steady increase in trade union membership. Over the past year the number of employees who are members of unions has increased by 118,000. This is the fourth year in a row in which membership has increased among employees.

As a share of all employees, the membership rate has increased from 23.3 per cent in 2017 to 23.7 per cent in 2020 – the third successive annual increase in this measure. Although this a modest change, it is still notable, and is a break with the established trend: it is the first sustained increase in trade union density for decades.

But while trade unionism may no longer be in decline in the UK, it is too early to pronounce a revival. Membership rates are still lower than in 2015. And the increase in membership levels in 2020 was in large part a product of the growth in size of the public sector – where membership rates are higher – compared with the private sector. These compositional shifts have provided a tailwind to trade unions but they are not a sustainable source of membership growth.

Further, although the outlook for trade unions is improved with recent data, there can be no getting away from the demographic headwinds that an older membership creates – membership will continue to fall unless this recent upward trend is sustained.

The number of employees who are members of a trade union increased by 118,000 last year to 6.6 million. This is the largest single year increase in union membership in 20 years, and follows on from successive increases since 2017 in which membership stood at 6.2 million.

After decades of persistent decline, membership has increased consistently for the past four years, as shown in Figure 1. The last time membership growth was this consistently positive was the late 1970s, when membership (as recorded in a different time series) grew every year between 1975 and 1979. A four-decade trend towards decline now appears to be in abeyance.

Figure 1: Employee trade union membership has increased for four years in a row 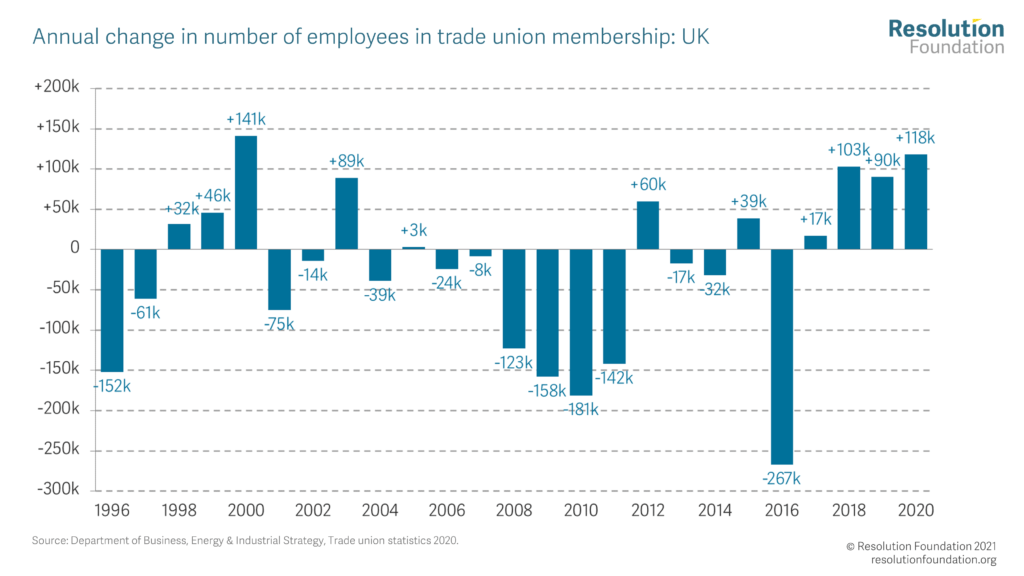 Digging beneath the headline trends, we can see that this 118,000 increase was entirely a product of changes in, and to the size of, the public sector. There were an extra 227,000 members in the public sector in 2020 compared to 2019 (Figure 2). In contrast, private sector employee and self-employed membership fell (by 110,000 and 19,000 respectively), as these parts of the labour market shrank substantially as result of the Covid-19 shock.

Figure 2: The increase in membership in 2020 is driven by growth in the public sector 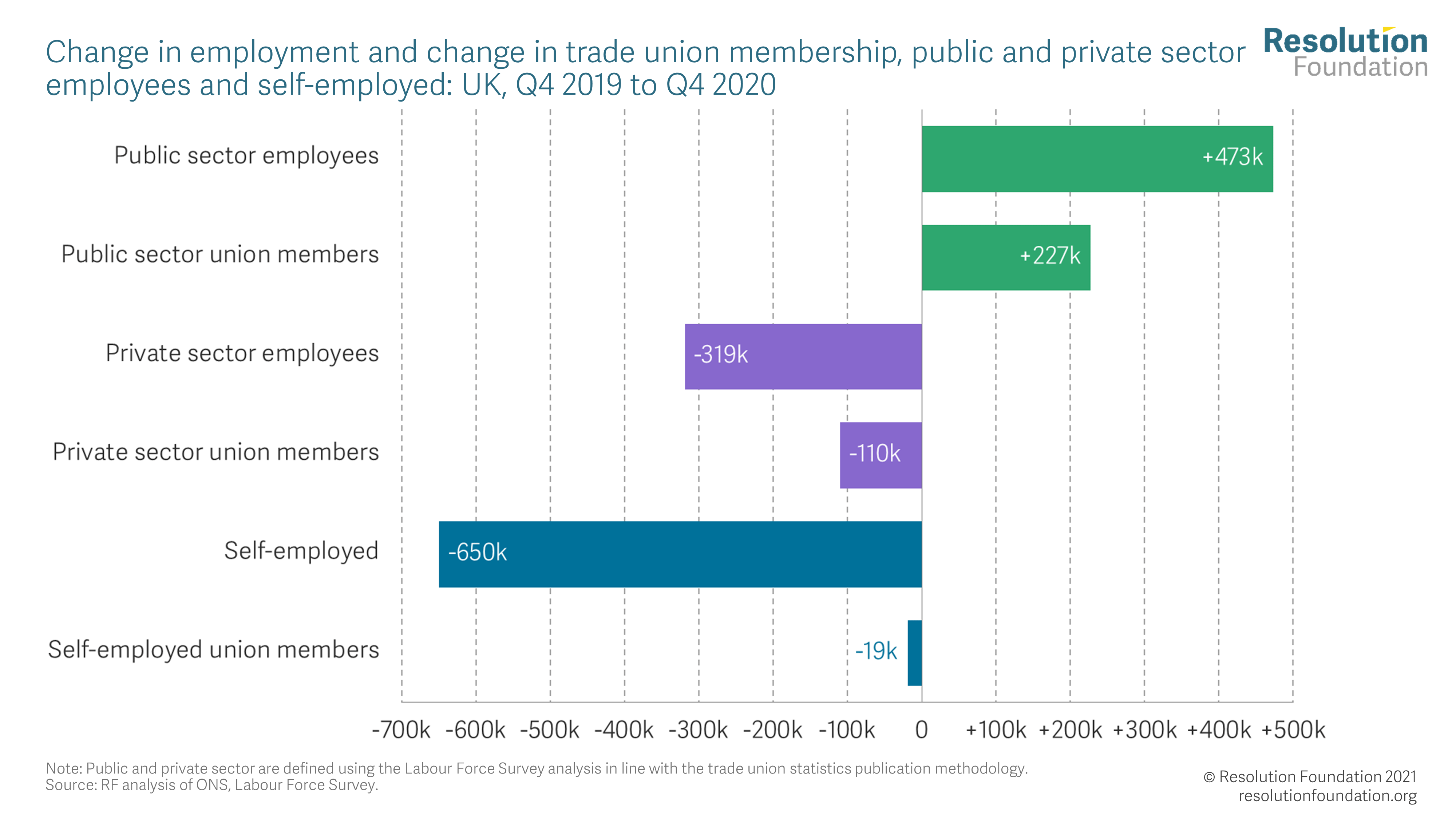 There are two parts of the public sector in particular that are the cause of the rise in membership over the past year. First, education. Between 2019 and 2020 the membership rate in education increased from 48.7 per cent to 51.4 per cent, which is equivalent to an additional 150,000 members. This reverses a decline that took place in 2016, returning membership rates in education to the level at which they have been broadly constant since 2010.

As a proportion of employees, union membership has inched upwards since 2017 – but is still lower than in 2015

Over the past four years the number of employees in trade union membership has increased by a total of 328,000, at the same time the number of employees has grown by 1 million. The pace of growth, then, looks more modest when placed in the context of the larger labour force. The share of employees in trade union membership has nudged up from a low of 23.3 per cent in 2017 to 23.7 per cent in 2020 – still lower than in 2015, when the membership rate stood at 24.7 per cent. This trend, and the overall membership rate once we include the self-employed, is shown in Figure 3 below. 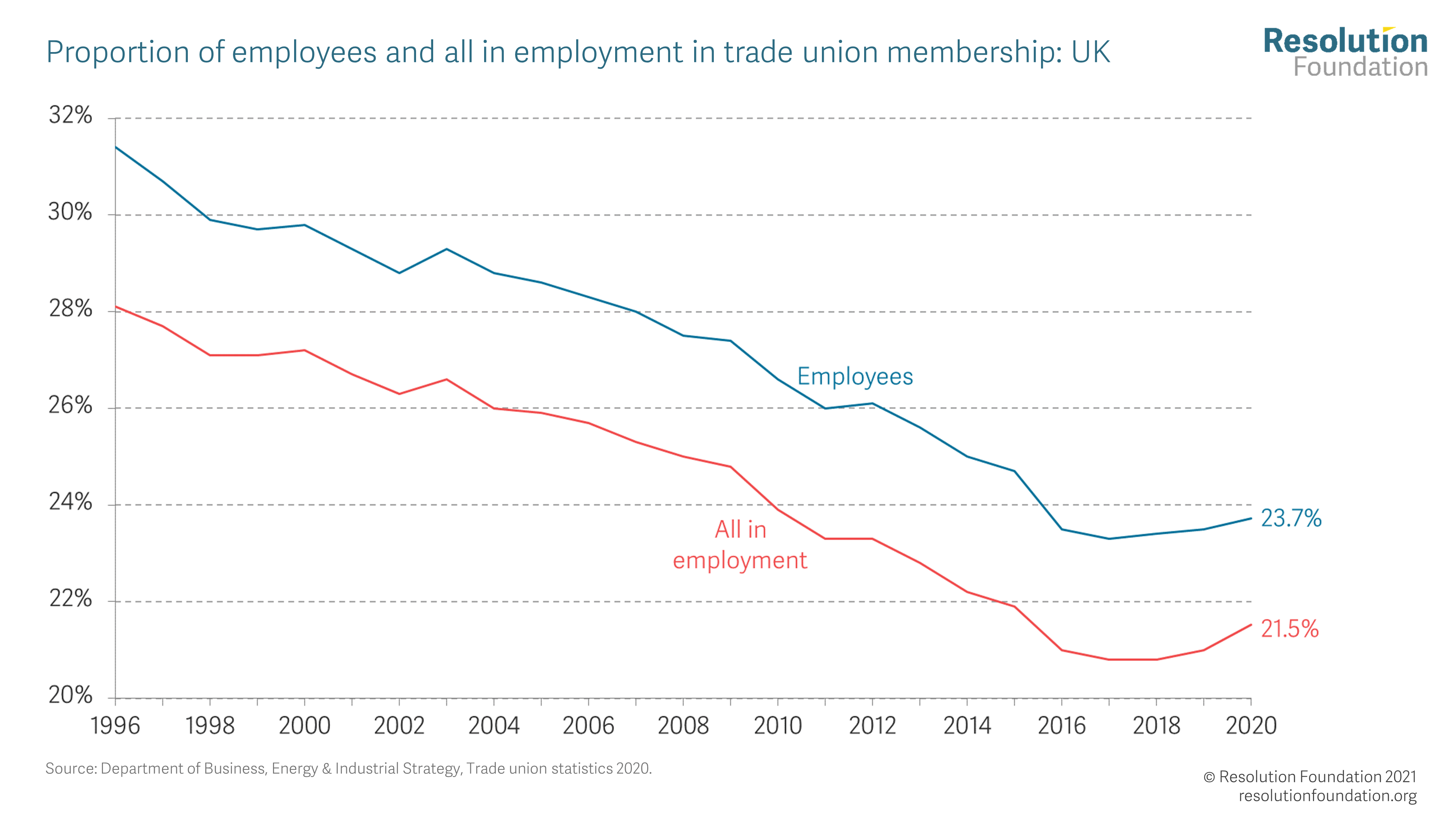 It’s important, however, that membership rates for 2020 are treated with some caution because the large changes in employment in different sectors of the labour market have affected membership rates much more than normal. 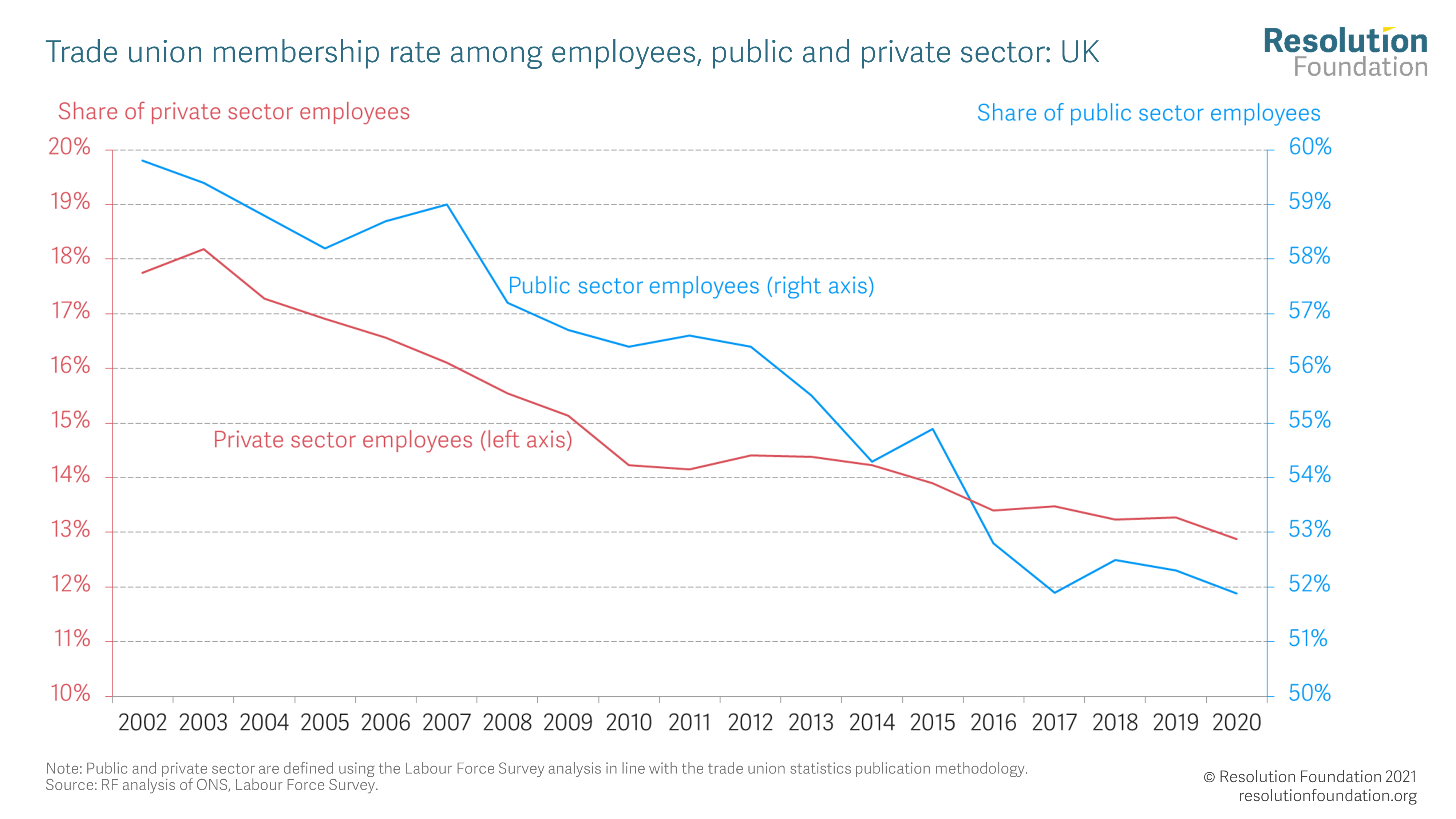 So, it is compositional change that can explain how membership rates can fall in both the public and private sectors even as the overall membership rate increases. But that this is the cause of the most recent increase should provide a note of caution for anyone who might expect that recent trends will be continued into the future. Growth in the public sector – which accounted for 27.3 per cent of employment in 2020 compared to 25.7 in 2019 – cannot be counted upon to deliver future increases in either union membership levels or rates. Welcome news today that Uber have formally recognised the GMB union does show, along with recent court cases and other union interventions, that unions are making progress in parts of the private sector and the gig-economy particularly – but this has not yet translated into membership growth.

The long-run story is of broad based decline in membership, with retail a clear exception

Taking a longer view over the past two decades, Figure 5 shows that the decline in membership is broad based across the economy. With steep declines in unionisation in the utility sectors and a steady fall in the membership rate across most sectors.

Figure 5: Trade union membership has fallen across the economy, but not in retail 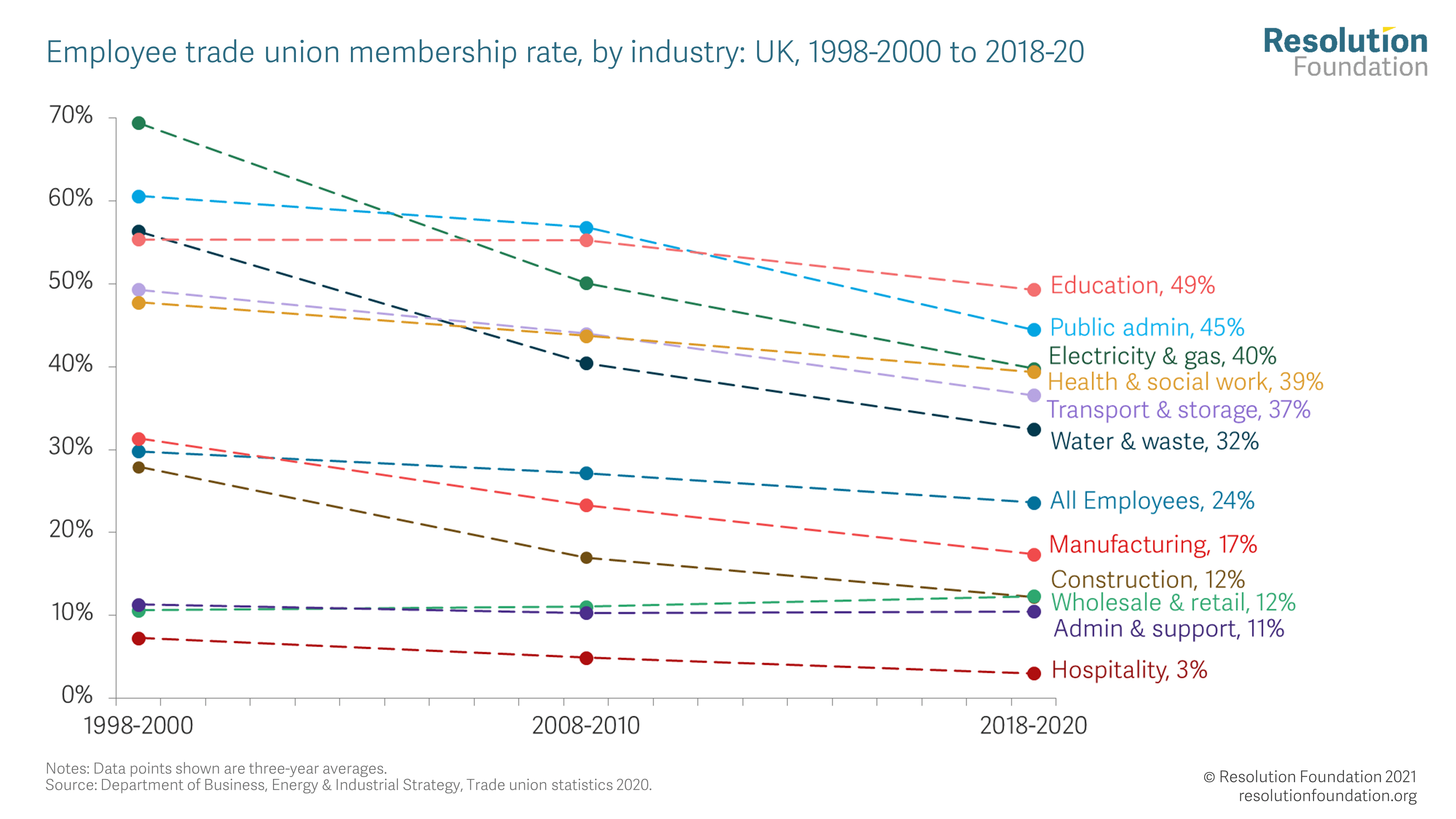 There are exceptions, and retail provides the most striking. Retail is a sector with one of the highest rates of low-pay and where zero-hour contracts are more prevalent yet, unlike other similar sectors such as hospitality, membership rates have risen in retail over the past two decades. From 10.6 per cent in 1998-2000 to 12.3 per cent in 2018-2020. Despite retail’s relative employment decline, membership levels have increased too from 410,000 in 2000 to 460,000 in 2020. Usdaw and other unions have brokered agreements with big retailers such as Tesco and are clearly making slow and steady progress in growing a membership in a low-paid sector. Part of what may have happened in 2020, as employment fell in retail, is that union members were more likely to stay in work as the sector shrunk, but this will not be the whole story given that the level of membership actually increased by 17,000 over the course of 2020.

The broad industrial decline is not reflected in the same way across the age range. With membership among those under 30 rising recently, and broadly at the same level as it was a decade ago. Admittedly absolute levels of membership are far lower among the young, so there was arguably less scope for further decline. But it is among this age group alone that the fall in membership rates has not taken place. As Figure 6 shows, membership rates had been steadily falling among older age groups throughout much of this century, and have started to plateau more recently. 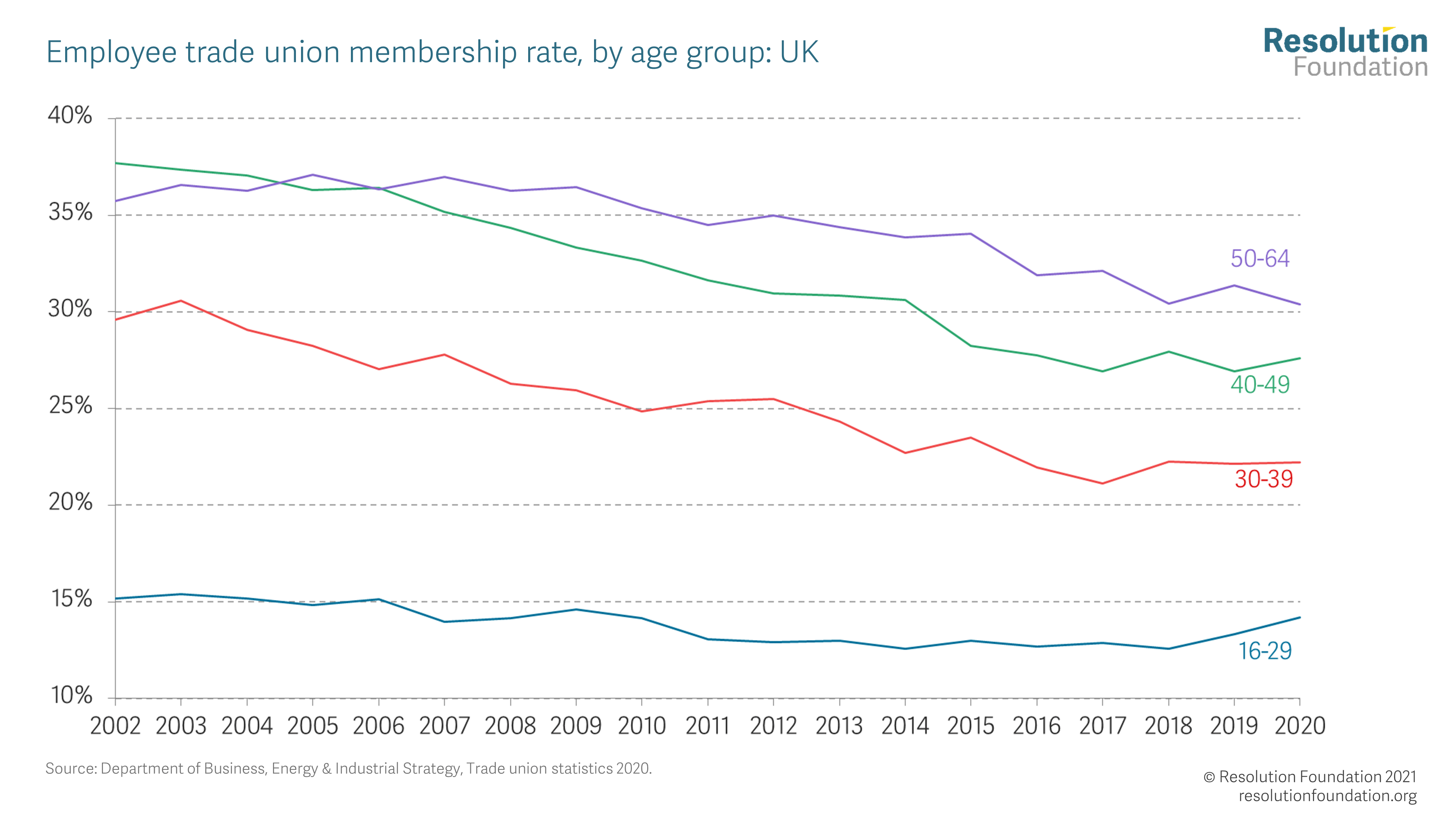 The recent uptick in membership among the under 30s shown in Figure 6 is (as with the aggregate story discussed above) more about changes in the composition of employment than about rates increasing sharply in particular sectors for younger workers. Membership rates for under 30s in both the public and private sectors have been flat since 2017 but the share of young people working in the public sector has increased sharply. 15 per cent of under 30s were employed in the public sector in 2018, this increased to 17 per cent in 2019 and shot up to 20 per cent in 2020 as a result of the pandemic. The key takeaway, then, should be that membership rates are no longer falling among younger workers, not that they are surging.

We can look at membership rates by birth cohort to see how this uptick in unionisation among younger workers translates into joining rates for different five-year birth cohorts. This provides another way of looking at the changes depicted so far in this note. And it helps clarify the nature of the demographic challenge facing unions.

Figure 7 sets out the rate of unionisation among all those in employment for 10 five-year birth cohorts. The oldest cohort for whom sufficient data on membership is available are people born between 1951 and 1955, with this cohort aged 46 to 64; and the youngest cohort, born between 1996 and 2000, for whom we can track membership from age 16 to 20.  It shows how membership rates increase sharply as cohorts age through their twenties, before flattening out around age 30 and declining again from around age 55 onwards. Although the youngest cohorts are broadly on the same path in terms of membership rates as their predecessors, the peak to which each cohorts’ membership rate reaches by their early 30s has been in structural decline: 26 per cent of those born in the late 1960s were trade union members at age 31 compared with 18 per cent of those born in the late 1980s by the time they reached a similar age. 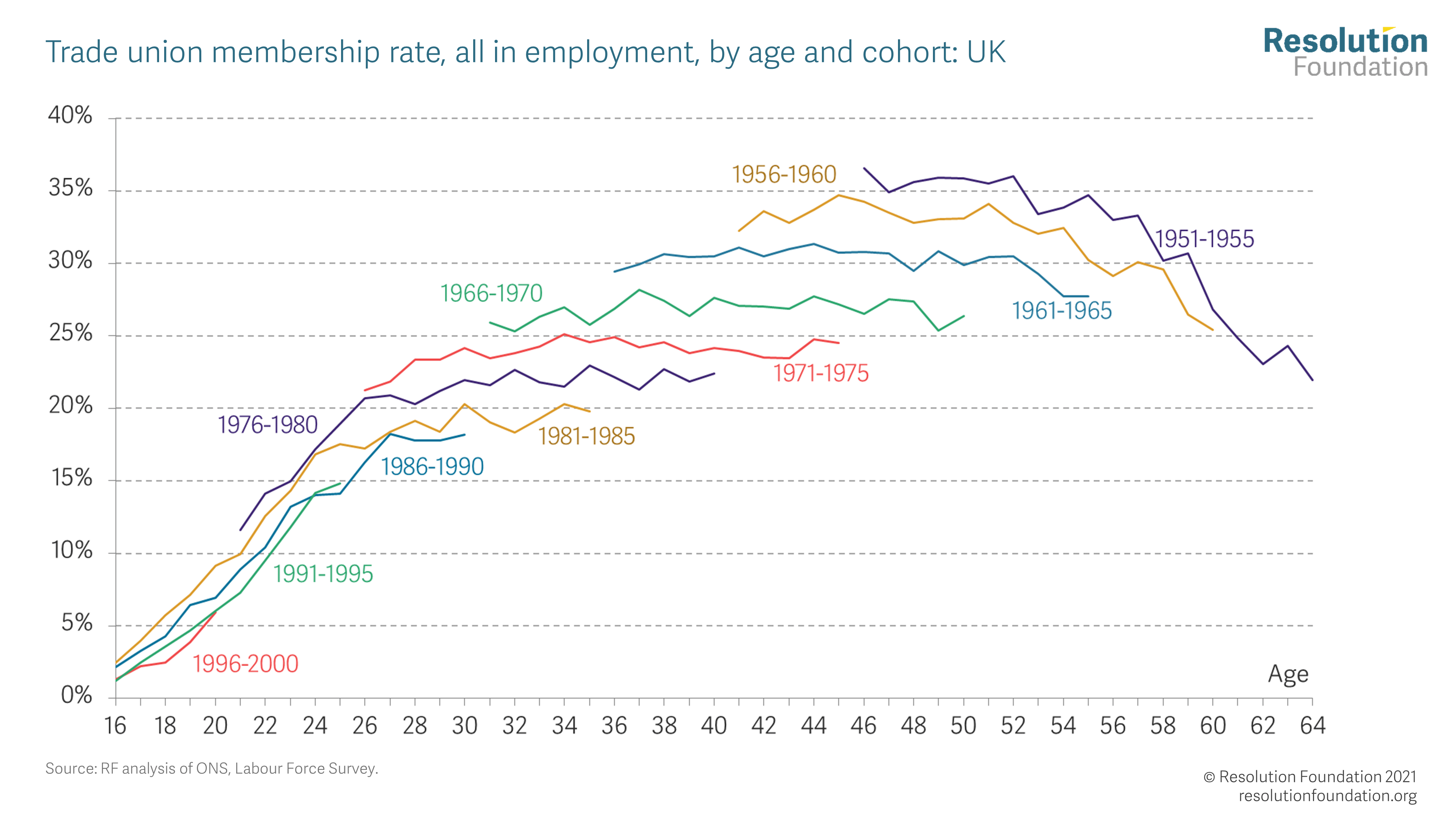 This reduction in rates from cohort-to-cohort means that, as older workers with higher membership rates move through their working lives and into retirement, they are not being replaced in anything like the required numbers to prevent overall membership rates from falling. Younger workers aren’t joining in sufficient numbers to replace retiring workers.

To understand the scale of this challenge, and how it is affected by the recent increase in membership we have seen, we have used the latest data to project membership rates forward to the end of the decade. This scenario is based on the simple assumption that changes in membership over the rest of the 2020s track what has happened over the past five years. For example, the cohort born between 1986-1990 experienced a 29 per cent increase in their membership rate between age 25 and 30 – and we assume this same percentage increase for the cohort that follows them, those born between 1991 and 1995.

Although small in effect, we also take account of the size of each cohort as well as cohort employment rates (from 2019, rather 2020 so as not to have the projection affected by the large falls in employment that have taken place in the past year).

Overall, if recent trends were to continue, we find that the membership rate among all those in employment is set to decline from 21 per cent over the years 2016-2020 to 18 per cent by 2026-2030 (Figure 8). To be clear, this is a smaller decline than we have projected in previous years (in 2018 we projected membership would fall to 17 per cent by the middle of the 2020s) as a result of the recent uptick in membership. But the key result – that demographics mean that union membership is still trending down despite recent good news – still stands.

Figure 8: Membership is set to fall to 18 per cent by the end of the decade 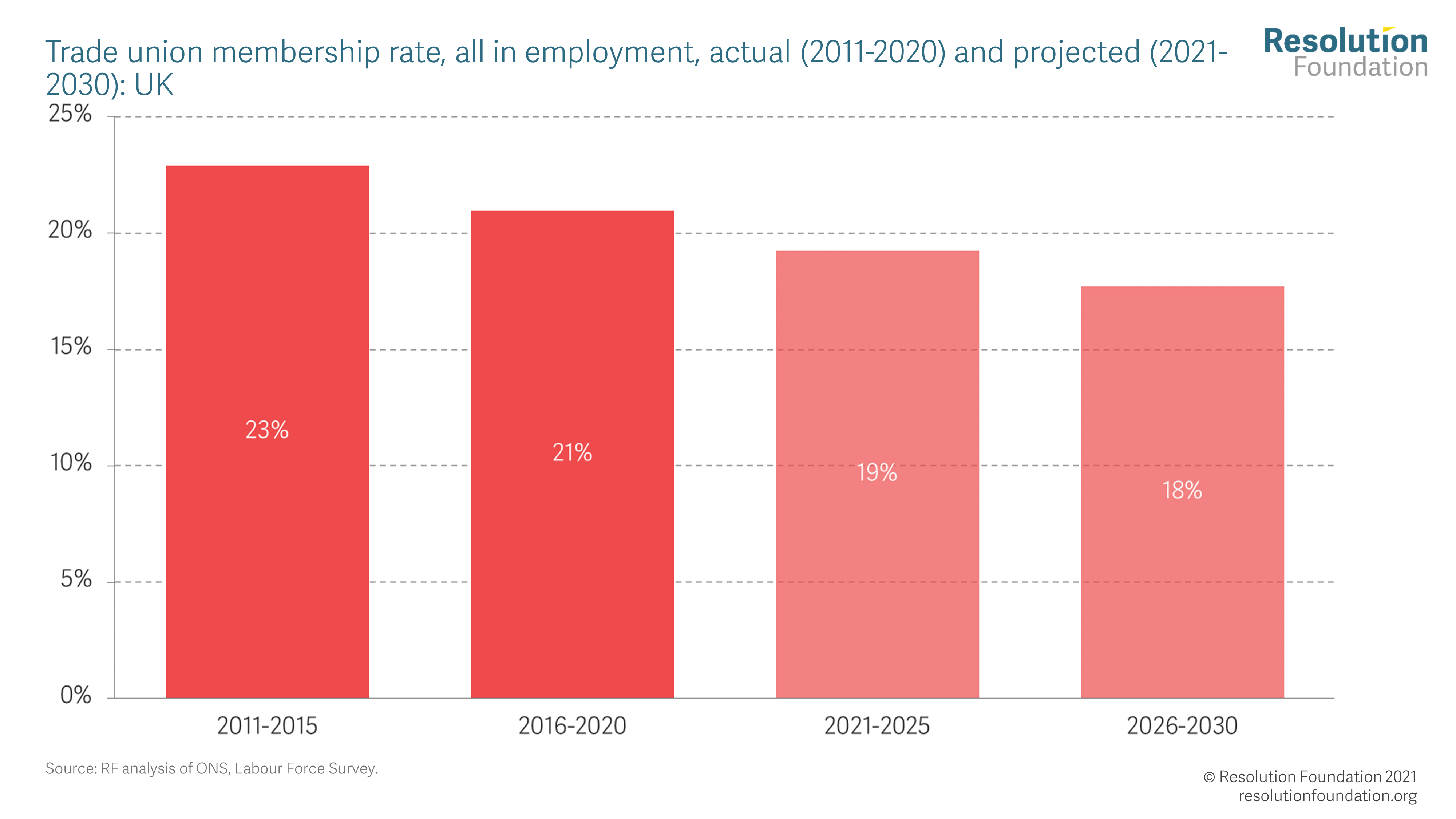 This scenario, is of course, not a prediction. As recent years have shown, trends can change. But it is a useful way of illustrating the scale of the challenge if the recent past is any sort of guide to the future. It may prove to be too pessimistic. The recent upward trend in overall membership may continue. But it could also be too optimistic should the recent rise in membership end abruptly as Covid-19 fades.

Until recently trade union membership had been in a consistent four-decade long decline, but over the past four years this decline has begun to slow. This is driven by higher membership in the public sector, with trade unionism still a declining force across much of the private sector, despite exceptions such as retail. The largest increase in membership rates have been seen among the young. Despite this progress, the long-run demographic challenges facing trade unions remain.

Who cares?
The experience of social care workers, and the enforcement of employment rights in the sector
26 January 2023
·
Nye Cominetti
Constrained choices
Understanding the prevalence of part-time work among low-paid workers in the UK
30 November 2022
·
Louise Murphy
Policing prejudice
Enforcing anti-discrimination laws in the workplace
8 November 2022
·
Hannah Slaughter
Back to top