From today, employers will start contributing towards the wage costs of furloughed employees. This significant first step in the phasing-out of the Coronavirus Job Retention Scheme (JRS) carries real risks of increased redundancies – particularly for those in the hardest-hit sectors – and so attention should also focus on the important question of just how many people are furloughed today.

Despite significant easing of the lockdown and attention rightly focused on the large number of redundancies announced of late, it’s still common to hear the claim that nine million employees are being paid right now through the scheme. However, this is simply not true. Although it is true to say that in total nine million people have been furloughed for at least one three-week period since March, this cumulative figure does not reflect what’s happening right now. Rather, all the evidence suggests that the number of people furloughed today – as employer contributions towards furlough pay kick in – is likely to be at most half, and maybe even as low as one-third, of this nine million total.

For the millions of workers who have returned to active employment over the past three months, the JRS has served its purpose well. But it may be the case that more than one million employees in the hardest-hit hospitality and leisure industries are still furloughed. It’s in this context that the impact of the across-the-board increases to employer contributions in August, September and October are a concern. Delaying future increases in JRS contributions for the hardest-hit sectors would help reduce the rise in unemployment forecast in the autumn.

The Coronavirus Job Retention Scheme (JRS) has been a very successful and well-implemented policy intervention. It has supported household incomes in the face of an unprecedented shock, and maintained the crucial attachment between employees and their employer. However, for many firms and employees it will have only ever been used on a temporary basis at the height of the economic shutdown. Many furloughed employees have since returned to work (some on ‘flexible furlough’ for part of their working hours), and a smaller group will have been made redundant already, even before today’s introduction of employer contributions.

But you wouldn’t know this from listening to our politicians and broadcasters. The Prime Minister, claimed on 24 July 2020 that his Government was “supporting the livelihoods of 9 million people now through furlough”. Similarly, the BBC reported on 28 July 2020 that “9.5 million people are using the scheme, the same as a week ago”.

This is wrong. Although the cumulative take-up of the scheme since its launch is in excess of nine million, the actual number of people using the scheme right now – on the day that employers are now required to start contributing to the payroll costs of furloughed employees – is undoubtedly much lower.

Figure 1 shows the increase in cumulative JRS take-up over time, as published by HM Revenue and Customs. These cumulative figures are now entirely meaningless when it comes to understanding the path of the economic recovery or the numbers of people who have been furloughed for a prolonged period of time.

Figure 1: Nine million people have been on the JRS at some point since its launch 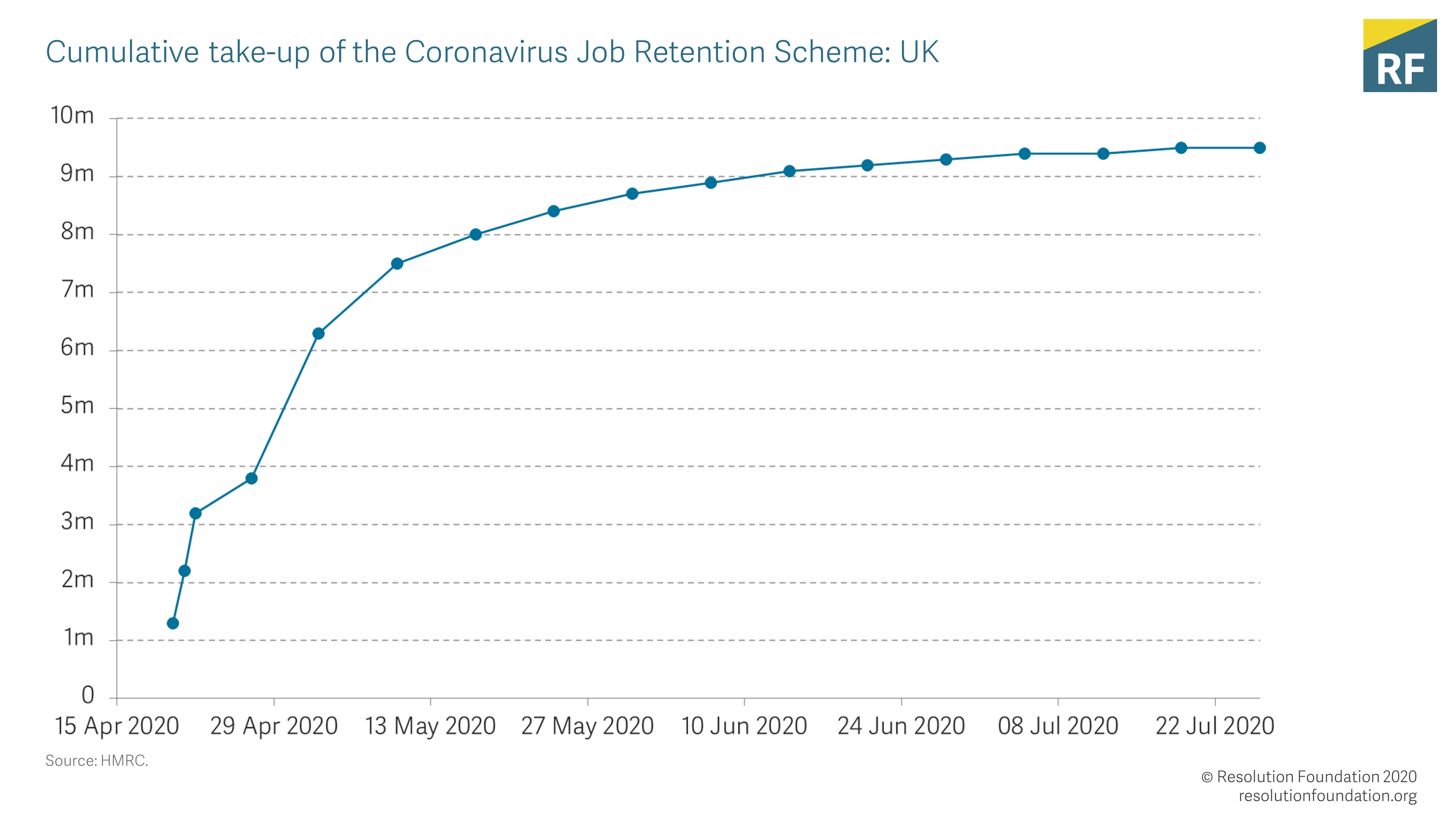 All the evidence suggests that the number of people currently furloughed is at most half the nine million total, and could even be one-third of this level

In the absence of official statistics on furlough numbers over time, we can turn to other estimates of furloughing and coronavirus labour market effects from various Office for National Statistics (ONS) surveys, in order to get a sense of when take-up peaked and just how fast it has fallen.

Across the three available data sets stretching back to the announcement of lockdown on 23 March 2020, the consistent finding is that the number of people furloughed or away from work is likely to have peaked in late April at somewhere between seven and eight million employees (Figure 2). The upper end of this range is based on the ONS’s Business Impacts of Coronavirus Survey (BICS), which reported that 31 per cent of the private-sector workforce was furloughed in late April.

Figure 2: The number of people now furloughed is much lower than in late April 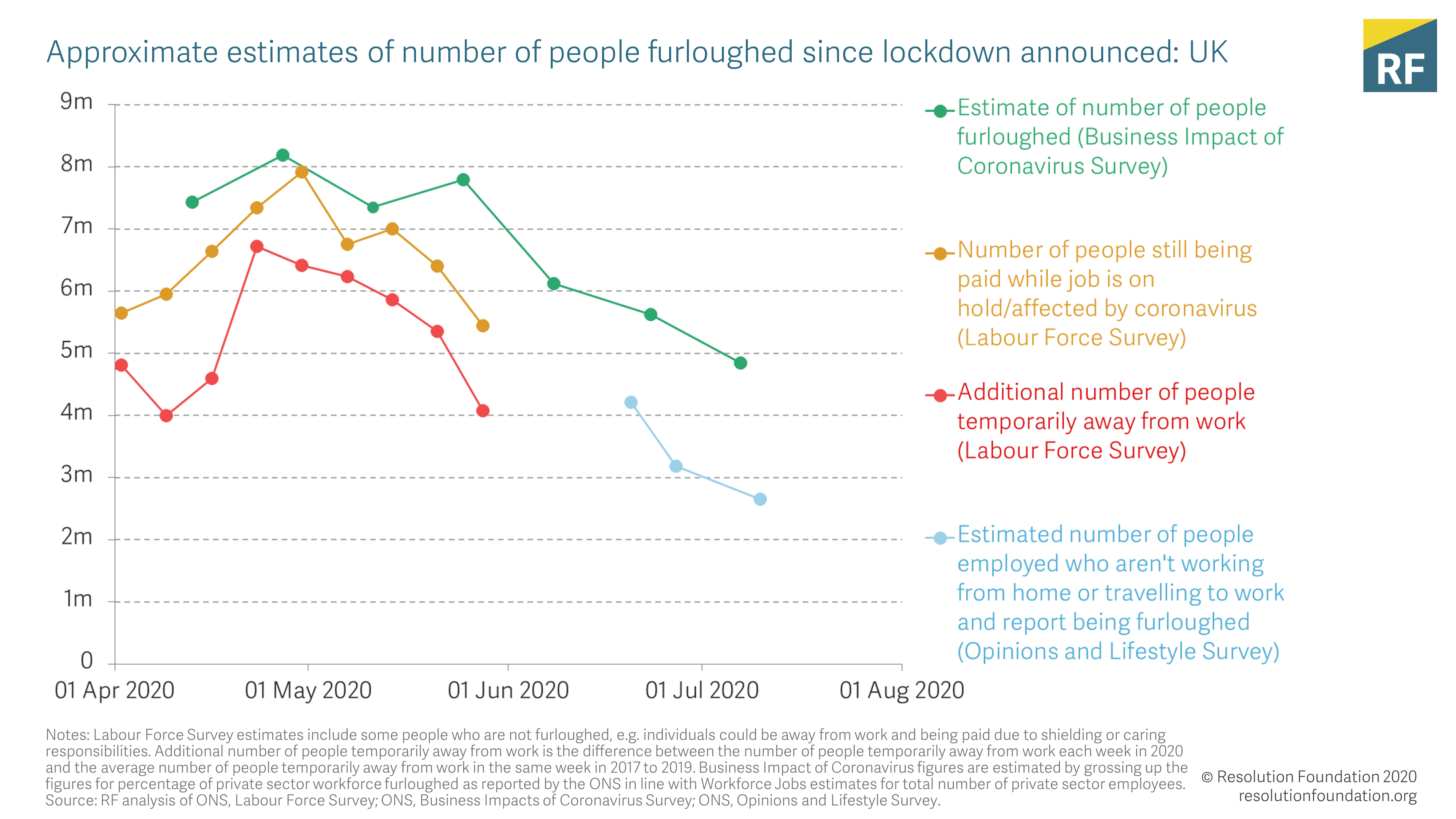 Since late April, the number of people furloughed or away from work looks to have fallen considerably. This is unsurprising given restrictions on non-essential retail were lifted on 15 June, and on many parts of hospitality and leisure on 4 July. The opening up of these parts of the economy, and the general increase in economic activity since the depths of lockdown, will have led to millions of employees returning to work. For example, the number of people temporarily away from work above and beyond the usual level of temporary work absences (the red line in Figure 2)  fell by 40 per cent between late April and late May. This will have been driven primarily by people coming off furlough, but also by reductions in the number of people away from work for other reasons such as shielding, self-isolating or for childcare. Some of this decline will also be driven by moves off the JRS and into unemployment, although this is likely to be a relatively small part of the story to-date as in May, June and July employers had not yet been asked to contribute anything towards the costs of furloughing their employees.

More up-to-date estimates come from the BICS for early July, which suggests that 16 per cent of the private-sector workforce was furloughed at this time. We estimate this equates to around five million people still on furlough at the start of the month. At the other end of the range, the Opinions and Lifestyle Survey (OLS) shows that the proportion of those who report that they are employed but furloughed fell from 13 per cent of all workers in the period 18-21 June, to 8 per cent of all workers in the period 8-12 July. This figure, which equates to three million employees, is at the lower end of the range we’d expect, and will have been affected by the introduction of flexible furloughing from 1 July. Many employees who returned to work part-time in July will not have been counted as furloughed in these OLS estimates, but may well have still have the majority of their pay provided through the JRS (and will appear in some of the other series shown in Figure 2).

It would be unwise to lean too heavily on this or any other estimate from one particular survey in drawing conclusions as to the number of people furloughed today. The use of flexible furlough in July could mean that the pace of decline in take-up slowed last month as employees moved from full to flexible furlough, rather than off the scheme altogether. To date there is little evidence on the impact of flexible furlough on business behaviour, but it’s likely that usage of this component of the scheme will be high.

Overall, it is reasonable to draw the conclusion that the number of people furloughed right now, as employers begin making contributions to furloughed employees’ wage costs, is certainly below 4.5 million (half of the commonly cited nine million total) – and may be as low as one-third of this level.

Employer contributions will disproportionately affect workers in hospitality and leisure, so a sectorally differentiated wind-down of the scheme is desirable

Although the number of people furloughed right now is lower than many claim, it is still a large proportion of the workforce – particularly in some sectors. For this reason, the impact of the introduction of employer contributions towards furloughed employees’ wage costs from 1 August should not be taken lightly.

This big change to the scheme will mean that employers will now start paying employer National Insurance contributions and minimum auto-enrolment pension costs for furloughed employees, at an average of £70 a month (equivalent to 5 per cent of the average employee’s wages pre-coronavirus). This shift will be followed by increases in contributions in September and October and then the ending of the scheme in November, changes which will have large effects on employer costs in sectors where furloughing rates are higher, such as hospitality and retail. We estimate that in these two sectors as many as one million employees (38 per cent) may still have been furloughed in late July (Figure 3).

Figure 3: Four-in-ten hospitality and leisure workers could still be furloughed 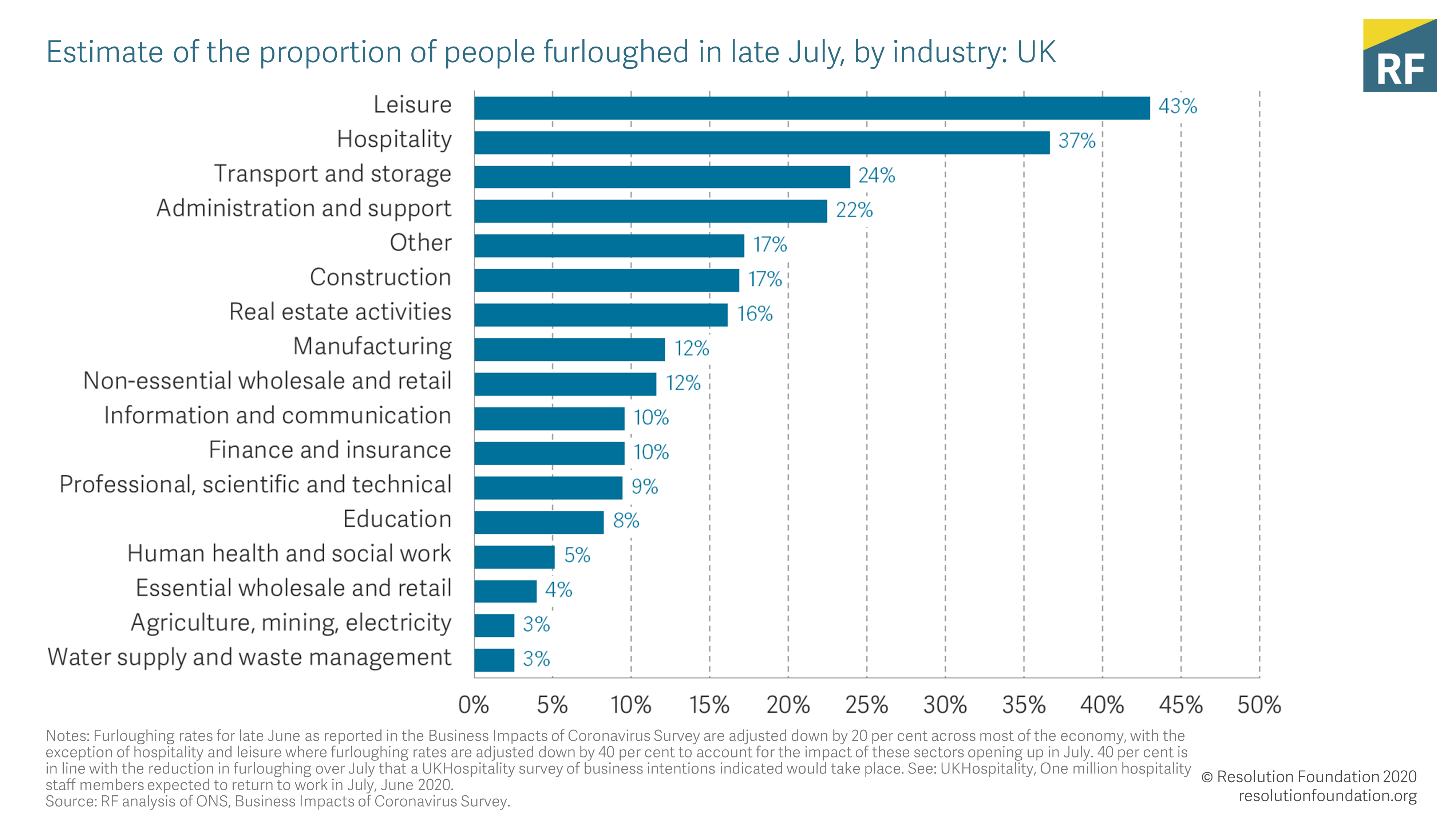 The fact that furloughing rates, and therefore the cost of employer contributions, are concentrated in particularly hard-hit sectors strengthens the case for treating these parts of the economy differently from the rest in the months ahead. Employees in these sectors are now at heightened risk of entering unemployment this autumn as employer contributions are introduced today and then increased throughout September and October.

We have previously called for the phasing in of employer contributions to take place on a slower timetable in the hardest-hit sectors for just this reason. The Government could still take this approach with the planned September and October employer contribution increases (to an estimated 15 and 25 per cent of pre-coronavirus wage costs), in order to limit redundancies in sectors like hospitality and leisure. Further, the imposition of local lockdowns and the very real risk of a broader second wave means that Government must also be clear about what policy will do in these circumstances. In time, flipping the JRS so it subsidises work being done in these hardest-hit sectors, rather than provides payments when work isn’t done, would be more effective way of maximising the amount of work carried out and would be a more sustainable way of providing support to parts of the economy heavily affected by ongoing social distancing. To date, the JRS has been a clear policy success. However, the challenges of phasing it out, calibrating it to the path of the virus and the return of economic activity mean that the hard work of designing and implementing policy that protects jobs and incomes in this crisis is far from over.