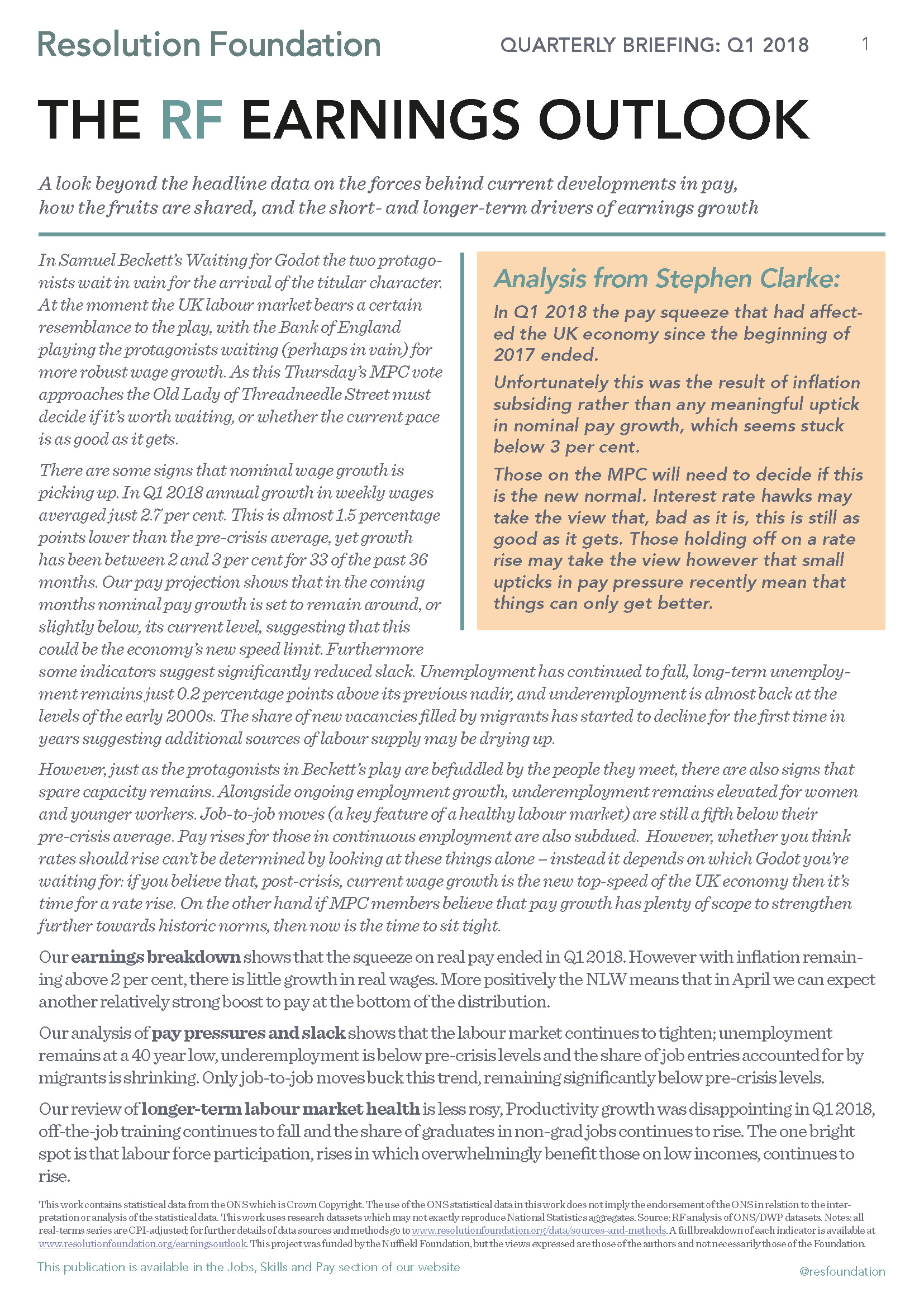 In Samuel Beckett’s Waiting for Godot the two protagonists wait in vain for the arrival of the titular character. At the moment the UK labour market bears a certain resemblance to the play, with the Bank of England playing the protagonists waiting (perhaps in vain) for more robust wage growth. As this Thursday’s MPC vote approaches the Old Lady of Threadneedle Street must decide if it’s worth waiting, or whether the current pace is as good as it gets.

There are some signs that nominal wage growth is picking up. In Q1 2018 annual growth in weekly wages averaged just 2.7 per cent. This is almost 1.5 percentage points lower than the pre-crisis average, yet growth has been between 2 and 3 per cent for 33 of the past 36 months. Our pay projection shows that in the coming months nominal pay growth is set to remain around, or slightly below, its current level, suggesting that this could be the economy’s new speed limit. Furthermore some indicators suggest significantly reduced slack. Unemployment has continued to fall, long-term unemployment remains just 0.2 percentage points above its previous nadir, and underemployment is almost back at the levels of the early 2000s. The share of new vacancies filled by migrants has started to decline for the first time in years suggesting additional sources of labour supply may be drying up.

However, just as the protagonists in Beckett’s play are befuddled by the people they meet, there are also signs that spare capacity remains. Alongside ongoing employment growth, underemployment remains elevated for women and younger workers. Job-to-job moves (a key feature of a healthy labour market) are still a fifth below their pre-crisis average. Pay rises for those in continuous employment are also subdued.  However, whether you think rates should rise can’t be determined by looking at these things alone – instead it depends on which Godot you’re waiting for: if you believe that, post-crisis, current wage growth is the new top-speed of the UK economy then it’s time for a rate rise. On the other hand if MPC members believe that pay growth has plenty of scope to strengthen further towards historic norms, then now is the time to sit tight.