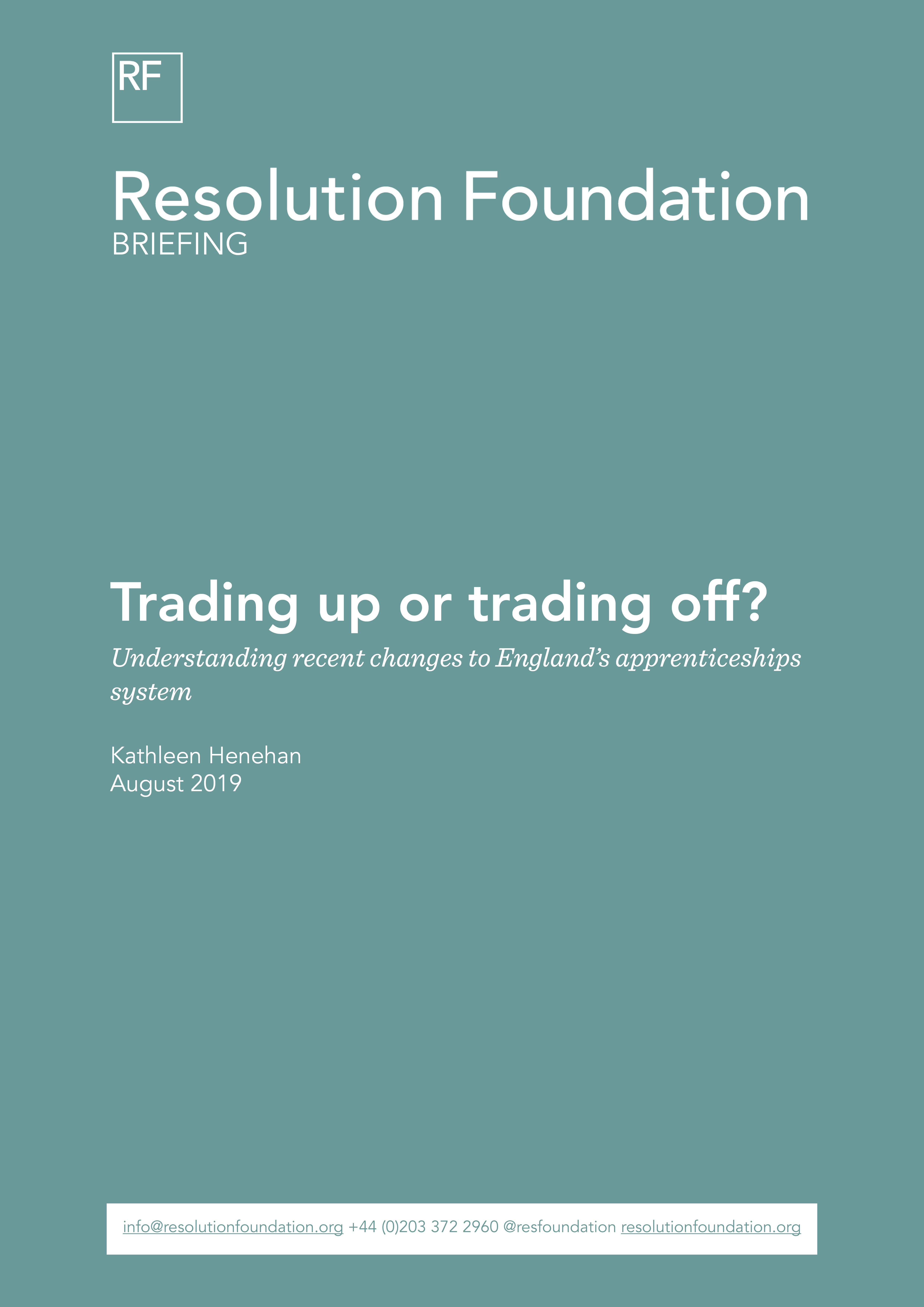 In 2017 there was overhaul to the apprenticeships system in England: large firms were required to pay 0.5 per cent of their wage bill into an apprenticeship levy, while regulations on training and delivery were firmed up. Two years on, this briefing note takes stock of the system, looking at what’s changed, why and where policy makers should consider moving next.

The system today is smaller: there were 25 per cent (124,000) fewer apprenticeship starts in 2017/18 than there were in 2014/15, and this fall was primarily driven by a reduction in starts at lower levels (i.e. GCSE-equivalent) of study, which nearly halved. On the other hand, there was a rise in starts at higher levels of study: overall, the number of apprenticeship starts at Levels 4 and above (higher-education equivalent) more than doubled (to 48,000) from 2014/15 to 2017/18.

Critics of the levy are quick to blame it for the overall fall in starts, but this briefing note finds that levy-paying firms are just as likely as non-levy payers to invest in the types of lower-level programmes that have experienced substantial reductions in numbers. Instead, it looks as though regulatory reforms, which required more training (and more money), offer a more convincing explanation for the reduction in numbers.

The types of programmes that experienced the largest falls were, on average, at lower-levels of study, in lower-paying sectors. Apprentices in these areas spent fewer than average hours in formal training and a higher-than-average share of them were unaware of the fact they were classed as an apprentice. While there is little evidence to suggest that the levy was responsible for the fall in lower-level starts, there is some evidence to suggest it encouraged growth at higher-levels. On average, levy payers were more likely than non-levy payers to invest in these areas.

Worryingly, starts at these higher levels are not typically undertaken by those at the beginning of their careers. In fact, a Department for Education survey published in 2017 found that 83 per cent of all higher-level apprentices aged 25 and over said they were employed by the same firm prior to beginning their apprenticeship.

Given projections that the apprenticeships budget could be overspent by as much as £1.5bn in 2021, policy makers are considering how to prevent an overspend, while stakeholders wrangle for position. This briefing note argues that they should hold firm on their recently implemented training rules, and put into place strong monitoring and enforcement systems. They should also ensure that the system offers a clear route to a good career for young people and new starters. To that end, they should consider requiring levy payers to dedicate at least half of their levy expenditure to the under-30s and an overlapping half to new starters to the firm.