This morning’s labour market statistics broke records left and right. Mostly this was good news, with a new high on the employment rate and a (belated) return to peak pay. But as Linford Christie famously said, if you want to be a record breaker … it’s a good idea to look at the full range of indicators and assess the labour market as a whole. There were less positive records set on zero-hours contracts. And of course, the good news on pay is bittersweet, reminding us of the ground lost on earnings and living standards since the financial crisis. Here is more detail on this morning’s labour market data.

This morning’s labour market statistics from the Office for National Statistics (ONS) represented a landmark moment for living standards – 12 years since the financial crisis, average pay has finally hit a new peak in real terms. Average weekly regular earnings (i.e. excluding bonuses and arrears) were £511.60 in the three months to December 2019. The previous peak, adjusting for CPIH inflation, was £511.30, set all the way back in August 2007. 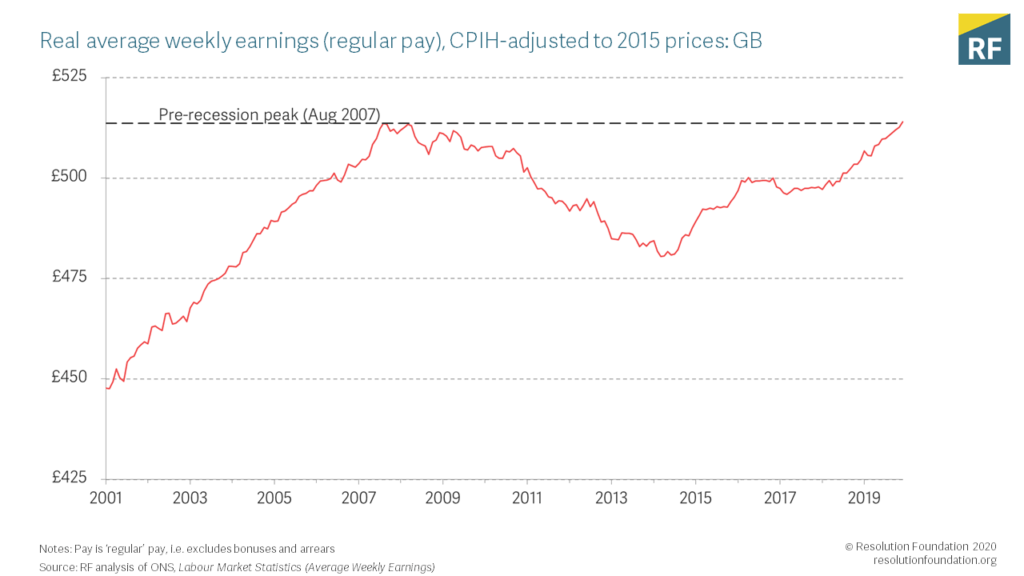 The return of record pay is a bittersweet moment. The UK’s pay downturn has been a disaster for living standards. While record pay is obviously something to celebrate, the fact that it’s been such a long time coming serves to remind us of what we’ve lost. The average pay packet today is 30p higher than it was 12 years ago (or £1 if you prefer data rounded, as the ONS does). If, instead, real pay had continued to grow at its pre-recession trend of 2.1 per cent per year, average weekly pay today would be £141 (27 per cent) higher in real terms. 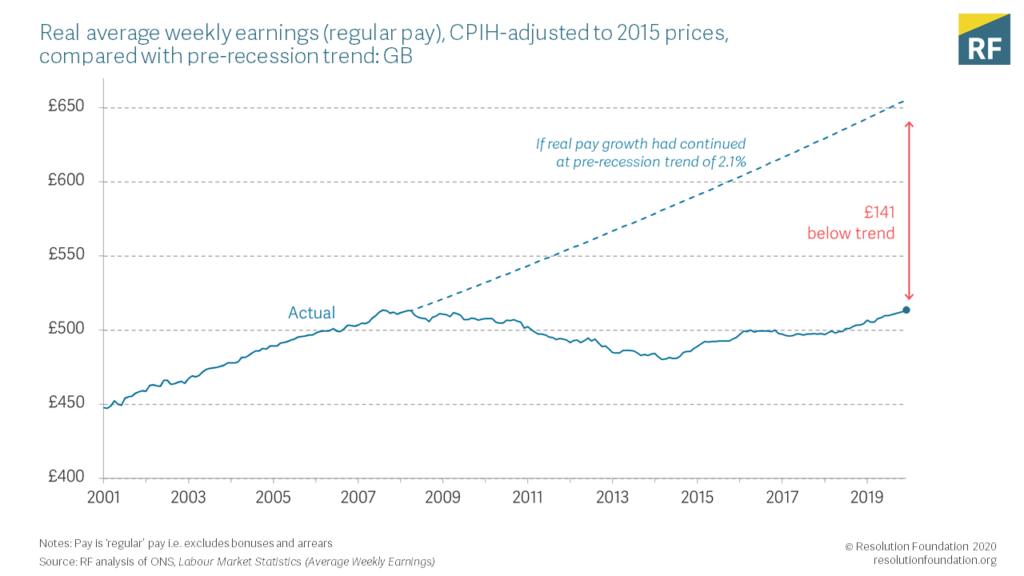 This represents an extraordinary amount of lost ground. And it is a record of sorts. According to the Bank of England’s ‘Millennium of Macroeconomic data’, the only comparable pay squeeze (a period during which average pay is below peak in real terms) in the past 150 years was in the 1920s, and that one was shorter, lasting nine years. Let’s hope it’s at least another 90 years before the pay squeeze record is broken again.

The unambiguously welcome record today was on employment, with the 16-64-year-old employment rate hitting 76.5 per cent. This reverses the dip seen at the end of last year. And it reopens the question: how high can employment go? With several months of stable employment data last year, we had thought that 2019 represented a plateau on employment, but this now looks premature. Meanwhile, the unemployment rate, at 3.8 per cent, remains at its lowest level in over four decades. 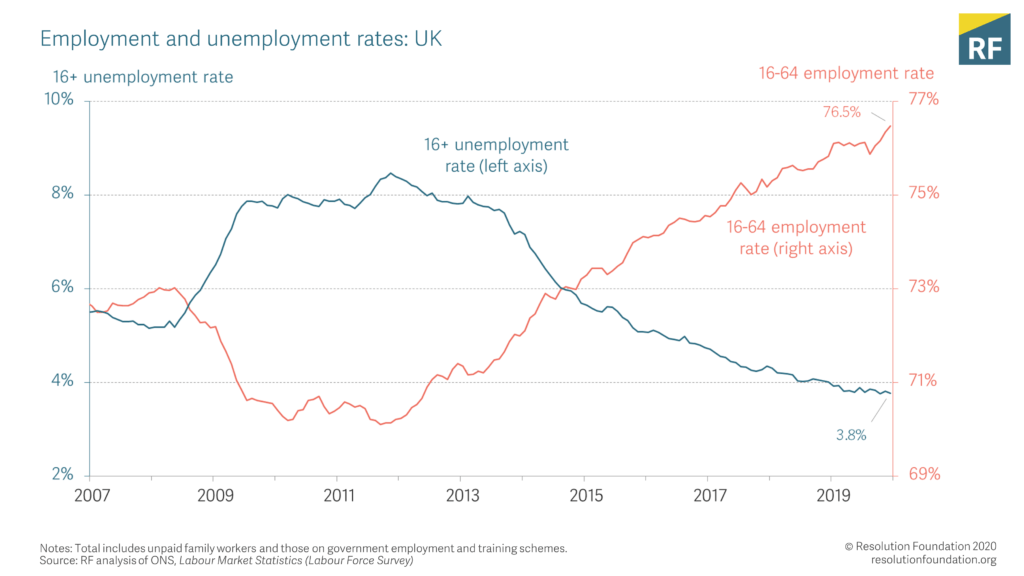 This is just about as tight as the labour market has ever been (at least, since our modern data series began in the 1970s). And this is true on other measures of labour market slack, too. The figure below shows four commonly used measures, and all suggest there is as little or less slack in the labour market today as there was pre-crisis. 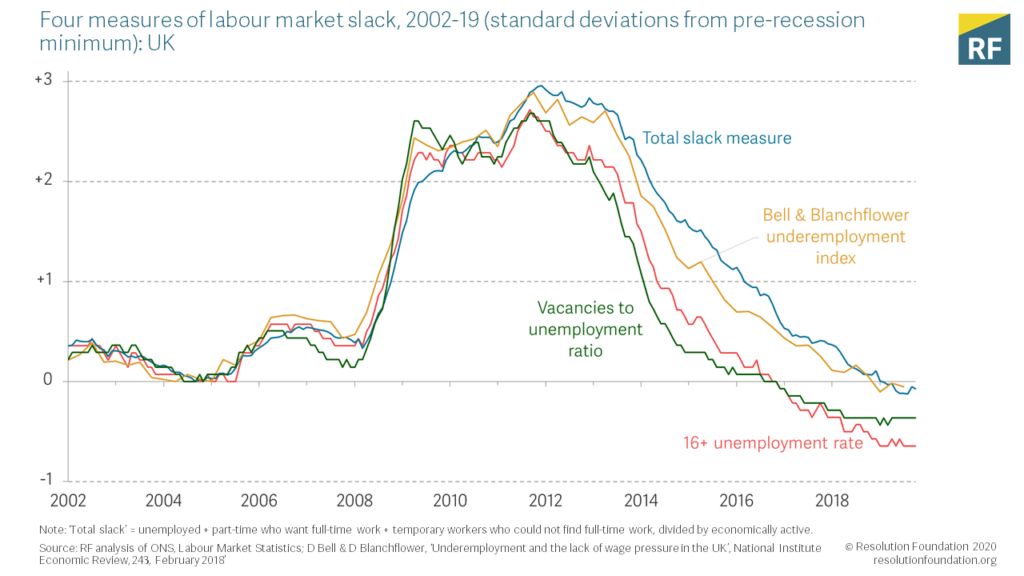 A fourth record today was on zero-hours contracts, which jumped to 974,000 in the latest data, amounting to 3 per cent of total employment. This is surprising given the tightness of the labour market – we might expect workers to use their bargaining power to secure more standard contracts, given the problems associated with unpredictable hours. 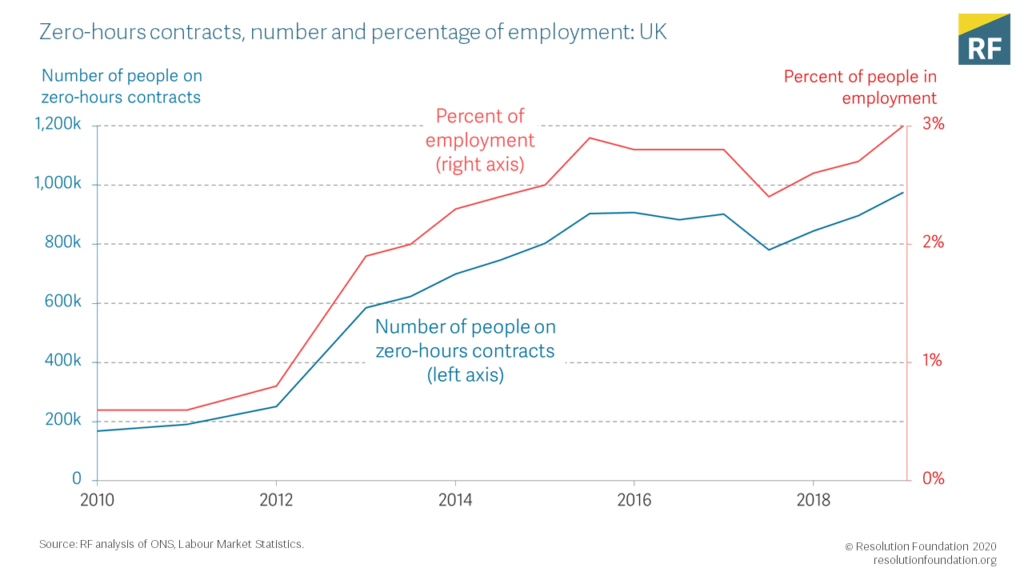 Less newsworthy, but arguably more significant given the number of people involved, is the fact that self-employment also reached a record high of 5.03 million in today’s data – up by around 1 million since the financial crisis. The rise and rise of self-employment (which is far bigger than its much-hyped sub-brand – the gig economy) and zero-hours contracts is a further reminder that increasing atypical work is not (just) a cyclical effect. It is a structural change, and it will take action through labour market regulation, the tax system and in other areas for those numbers to fall.

Today, we can welcome the end of the UK’s 12-year pay downturn, scratch our heads as to why it’s taken so long (the productivity puzzle still isn’t solved), and resolve to avoid it ever happening again. We can welcome record employment, and set our sights even higher – can we ever reach the near 80 per cent rates achieved in some Nordic countries, for example? But we also need to remember that the labour market is both growing and changing – and that that change can bring insecurity for some. Against this backdrop, it seems increasingly clear that some aspects of our labour market regulation have been struggling to catch up.