The ONS serve to uplift and depress analysts like me in equal measure. And today they served up the latter, with new figures showing that the number of people commuting for more than an hour to get into work has increased by almost a third (31 per cent) since 2011.

Longer commutes are good news for podcast makers – and for avid readers of Resolution Foundation reports – but bad news for everyone else. So on balance it’s something we should be concerned about. After all, commuting carries time and financial costs, along with wider effects on congestion and pollution. And for those with caring responsibilities, it can be a barrier to working at all. Normally, commuting long distances is a trade-off for higher pay.

Average commute times are about twice as high for those with incomes in top 25 per cent of the income distribution, compared to those in the bottom 25 per cent, once you control for control for age and cohort. But while commute times have increased since 2011, pay has not. Real earnings remain below their 2011 level, both at the median and at the higher end of the distribution (which is likely where the longest commutes are). Commuting times have therefore increased faster than pay.

Unfortunately, we know this one sided trade-off of longer commutes without the resulting pay bonus is particularly true for young people. Our Intergenerational Commission found that millennials are on track to spend 64 more hours commuting in the year they turn 40 than the baby boomers did at that age. And yet their earnings are no higher than the generation born 15 years earlier at the same age. 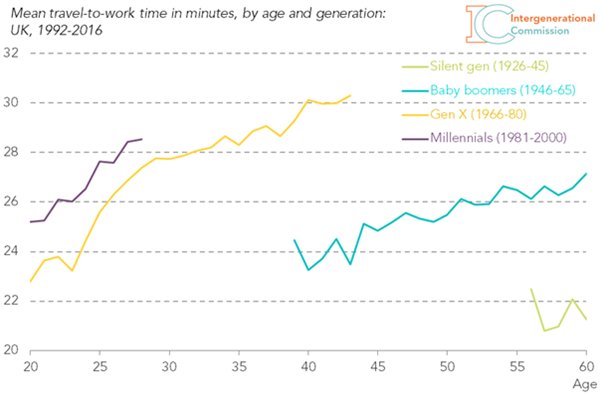 So why are we commuting more? The housing market is likely to be a culprit. Many places with the best paying jobs are also those where housing supply is most constrained. This seems to be affecting renters and owners alike; our research finds that those in different tenures have similar commuting patterns.

The trend towards longer commutes may be happening at the expense of geographic mobility too. Regional job-to-job moves have fallen since the early 2000s. This decline in mobility has implications for wages – the typical worker would have been £2,000 better off moving region and job, compared to staying with the same employer.

Beyond the overall increase in commute times, the other key takeaway is the gender imbalance in commuting. Men, unsurprisingly, are more likely to have long commutes. In one sense, this is a shame for men (though the extra time to read our reports is a silver lining). But more seriously, because commuting is a way of accessing higher paying jobs, it is more usefully interpreted as a way in which gender imbalances in caring responsibilities feed into a gender pay gap. The IFS has showed that a gender ‘commuting gap’ opens in the years after the birth of a first child, much as the pay gap does. They note that if women face more limited job choices due to caring responsibilities, they may lose access to higher paying jobs. 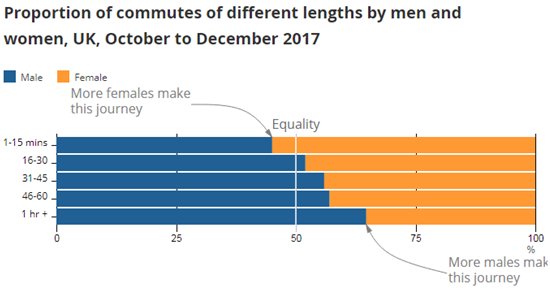 Commuting is a subject that is guaranteed to enrage people. But today’s figures show that commuter trends are even more important than rail rage and traffic jams – they provide an insight into where, and how, we work and live.

Longer commutes may be a sign that something is wrong with our housing market. And while many of us crave shorter commutes, for some groups this can be a driver of labour market disadvantage too.