This is the week the music consensus died. It’s hardly surprising, with political fracturing between parties and places reflecting the tensions all of us feel confronting the reality that this pandemic is here to stay.

But it’s a disaster if public faith in collective decision taking is undermined in the midst of a crisis that requires, above all else, collective action to effectively confront it. In the end we know we need tighter restrictions in Greater Manchester and elsewhere, and we know we need a fit-for-purpose economic response that makes those restrictions remotely possible to live with.

We’ve taken years as a country to make any progress on Brexit. There the dithering has hit our livelihoods, but with Covid it’s lives at stake. So if you’re a policy maker DON’T spend any of this weekend on the reads below, and get this mess sorted (which doesn’t mean letting the virus rip – as Tory MP Neil O’Brien set out admirably clearly today). Everyone else, tuck in.

Equalising plagues? We’re all on the hunt for silver linings to this covid-shaped disaster. That’s what the whole Building Back Better thing is about. And one people have latched onto is that at least the fourteenth-century Black Death led to big reductions in inequality. This follows the work of Walter Scheidel and others who say that major inequality reductions only happen after huge disasters or wars.  But don’t get too excited is the warning from a new paper that takes us on a tour of wider of epidemics from Justinian’s Plague of 540-41 to the joys of 19th Century cholera. It’s not a tour for the faint hearted, and highlights that the 17th Century plagues didn’t see a reduction in wealth inequality. Alongside this general point that different plagues have different inequality effects, the paper also includes an important warning against silver lining based readings of history: highly lethal pandemics reduced inequality not only through redistribution, but also through extermination of the poor.

Auctioning Nobels. Paul R Milgrom and Robert B Wilson won the Nobel prize in Economics this week. The awarding committee provided a surprisingly readable summary of their work in inventing new ways of thinking about auctions – while the process of one winner telling the other that they had won in the middle of the night also provides the single best advert ever for that most ludicrous of yuppy inventions: the doorbell camera. There has (inevitably) been a lively debate in the social media land about the prize. For a sense of the critique check out this from Branko Milanovic (which basically says, auctions are nice but how about we focus on some big questions, like how China’s growth happened) and the response from Noah Smith (which basically says you can’t have a prize just for asking the right question).

PANdemic. To lift our sights, it’s always worth a read of the latest IMF World Economic Outlook. The big picture is that things weren’t quite as bad as expected in recent months (the perky people at the IMF now expect the economy to shrink by ONLY 4.4 per cent this year) but the pace of recovery is slowing (the V is dying globally, not just here). So their gloom hasn’t gone, it’s just been punted into 2021. China, as ever, is bucking the trend with a strong enough rebound to be set for positive (1.9 per cent) growth this year. On the “what should policy makers do” side of things, check out the accompanying IMF Fiscal Monitor. Unsurprisingly it notes pandemics are expensive (deficits are up by an average of 9 percent of GDP and global public debt is approaching a record high of 100 percent of GDP). Only Canada in the G20 has been more active that the UK in increasing its deficit. But no, the IMF isn’t calling for an austerity repeat – in fact they want more public investment to boost the recovery.

Not so mobile. The idea that modern tech makes remote working the future is everywhere. Apparently, it’s going to solve all of our problems, spreading out good work across the country with no need for offices or densely populated cities. But what does history tell us about the impact of big improvements in communications technology? A new article (older free version) takes the case of mobile phones, examining 15 million phone calls and texts per day. The exam question is whether mobile communications are substitutes for face-to-face meetings or complements – if they’re substitutes then tech is aiding the “death of distance” by making it less relevant where we live. But the authors find the opposite – our mobile phone usage is very heavily shaped by physical distance, with almost 50 per cent of mobile phone ties being formed within a 5km perimeter. Their argument: better communications tech doesn’t overcome the difficulties of forming relationships over distance. Zoom is not the messiah. Who knew.

Problems and progress. This short report from Mckinsey is worth your time setting out simply the 1) significant progress 2) scale of the remaining gaps in labour market outcomes for ethnic minorities in 21st Century Britain. Check out the new ONS data on this too. The key issue is highlighted well by focusing on the huge progress in labour market participation by Bangladeshi and Pakistani workers – up over 11 per cent since 2004. But despite that huge progress these groups still overwhelmingly have the lowest rates of participation. So lots of progress (as we find here), but lots more to be done when we eventually get this recovery going.

This isn’t brand new, but it’s only recently crossed my desk so I’m sharing the job/existential angst it brings. You may have heard of the Fermi paradox – the idea that in our near infinite universe there should be a high chance of intelligent life but we can’t see any signs of it. Well, a paper from 2018 shows that actually the basis for people claiming there was a paradox in the first place was wrong. With some tweaks to the assumptions used to think about the probability of life developing you can quickly get to no paradox ie it’s perfectly possible there isn’t any. So, it’s not just that we’re locked in all alone at present. It’s that there’s every chance there is no-one else out there universe-wise.

ONS data earlier this week showed that unemployment increased at its fastest rate in over a decade in the three months to August. This shouldn’t be a surprise given the scale of the shock we’re living through, but who is losing their jobs? We know the sectors worst affected – hospitality, leisure and the arts – but there’s also an emerging gender dimension to the jobs crisis, as this week’s Chart shows. The biggest employment falls have come from self-employed men (down 360,000), and part-time women (down 333,000). Pre-pandemic, self-employment and part-time work were both booming – but both are in sharp reverse now, with very different implications for men and women. 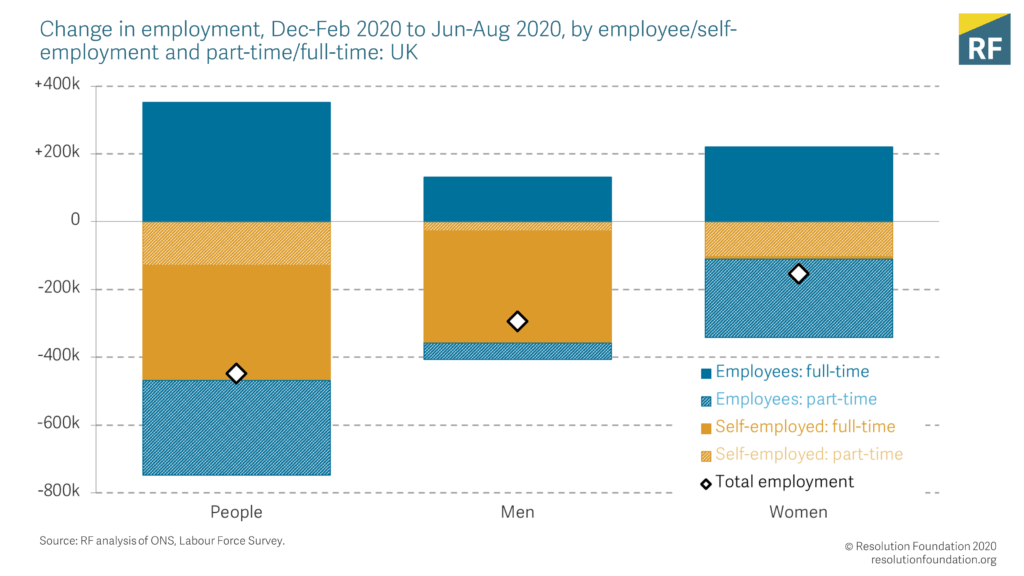