In the olden times, symbols were subtle – gently alluding to the challenges and joys in our lives if we spent time looking at them. These days a ship the size of four football pitches just wedges itself into the most important waterway in the world, bringing global commerce to a halt in the least subtle reminder that all of our lives have been put on hold for over a year now. I’m just glad I’m not an artist trying to compete with this nonsense.

Luckily we’re in the research rather than art game, and we’ve got some great reads this week – from inbred monarchs to how buying a round can help deliver the ‘levelling up’ agenda.

Have a great weekend all.

(In)Breeding Success. History is often written as the story of great men (and occasionally women), focusing on how leaders’ strengths/weakness have determined their nation’s successes. But a novel take on this issue comes from economists Sebastian Ottinger and Nico Voigtlander. To attempt to understand how rulers’ intellectual abilities may drive state outcomes, they exploit an interesting feature of European monarchies: widespread inbreeding. Genetic disorders resulting from inbreeding impacted a leader’s ability to rule but not their chance of doing so (given the whole primogeniture thing). Examining 331 monarchs from 13 states, the authors use the extent of inbreeding to find that more capable rulers do deliver quite significantly better results: a one standard deviation increase in ruler ability led to an expansion of territory of about 10 percent. Interestingly, monarch’s abilities stop mattering once parliaments starting providing a check on their power. The conclusions are very controversial – leaders do matter so we should elect able ones and avoid inbreeding. I reckon we can get 50 per cent of the way there.

Bridges to growth. In the dawn of time (the 90s) social capital was all the rage. Sociologists spent a lot of time reminding economists that the networks between people that build up trust are crucial to enabling society – and the economy – to function. Or to give a modern twist, we’ve just had a year of local WhatsApp groups pulling people together to get through the pandemic. But new research digs deeper into how different types of social capital influence economic growth, distinguishing between ‘bonding social capital’ (strong relationships within groups with a shared identify) and ‘bridging social capital’ (shared activities among otherwise different people). Examining 21 EU countries, the authors find that bridging social capital boosts regional growth – encouraging the sharing of ideas and broader networks of trust. Bonding capital actually reduces it, particularly in areas with low education/income levels where it risks “locking in” poor performance. The takeaway is we should all (vaccine passports allowing) get down the pub post-lockdown: even if meeting new people doesn’t excite you, remember it’s providing a badly needed boost to the landlord AND the wider economy.

Amazon Wage Services. Do campaigns to force high-profile and big companies to boost worker pay influence the labour market more broadly? That’s the question asked in a new paper examining Amazon’s decision in 2018 to introduce a $15 minimum wage for US workers. Yes is the answer – a 10 per cent rise in Amazon’s hourly wages raised average wages in the same local area by 2.6 per cent (with a small negative effect on employment). The lesson? If your firm hasn’t already, get them to sign-up to paying the real Living Wage that we calculate each year.

Decisions, decisions. Right, this is a bit awkward for those of us making a living out of rigorous data analysis to reach fact-based conclusions. But it’s important so here goes. Recent work (£, but free version) carried out an experiment by giving different researchers the exact same data set to answer identical research questions. In fact they did this twice for two different datasets/questions. They then compared the methods and results the researchers came up with. The awkward findings are that the researchers took quite different approaches to preparing the data (we often need to “clean” up messy data before using it) and to analysing it. In one of the experiments this led to researchers reaching quite different conclusions. This isn’t some nihilist argument against our ability to extract any knowledge from research. But it is a reminder that researchers inevitably have to make a lot of choices about how to use data – particularly in the ever-techier world of applied microeconomics – and we always need to check that our conclusions are robust to making such choices differently.

Covid impacts. There’s been a LOT of research this year on the impact of the pandemic and it can be hard to keep track of it all. So the British Academy have done everyone a service by pulling lots of it together into an impressive report this week that asks what the long-term impact of the pandemic on our society might be. Read it to be informed, depressed, but hopefully motivated to turn build back better slogans into some actual action.

It’s been another big week for economic data – from the actual jobs market to the shadow jobs market (furlough) – and yesterday we got detailed data on household incomes. It turns out the UK experienced something of a mini living standards boom in the year 1 BC (Before Covid) – with median income growing at its fastest rate in almost two decades. That’s a relief given that households have just experienced the worst decade for income growth since records began. But it wasn’t just incomes that rose – so too did poverty, as this week’s chart shows. Specifically, poverty rose among children and pensioners. And even more specifically, the rise in child poverty – now at its highest level since 2007/08 – was driven by families with at least three children. Almost half of these children now live in poverty. The background here is of course big reductions in benefit support for children, including the rollout of the two-child limit. The latter is basically what you would dream up if you wanted a policy laser targeted at raising child poverty, and its impact will continue to build for many years to come. 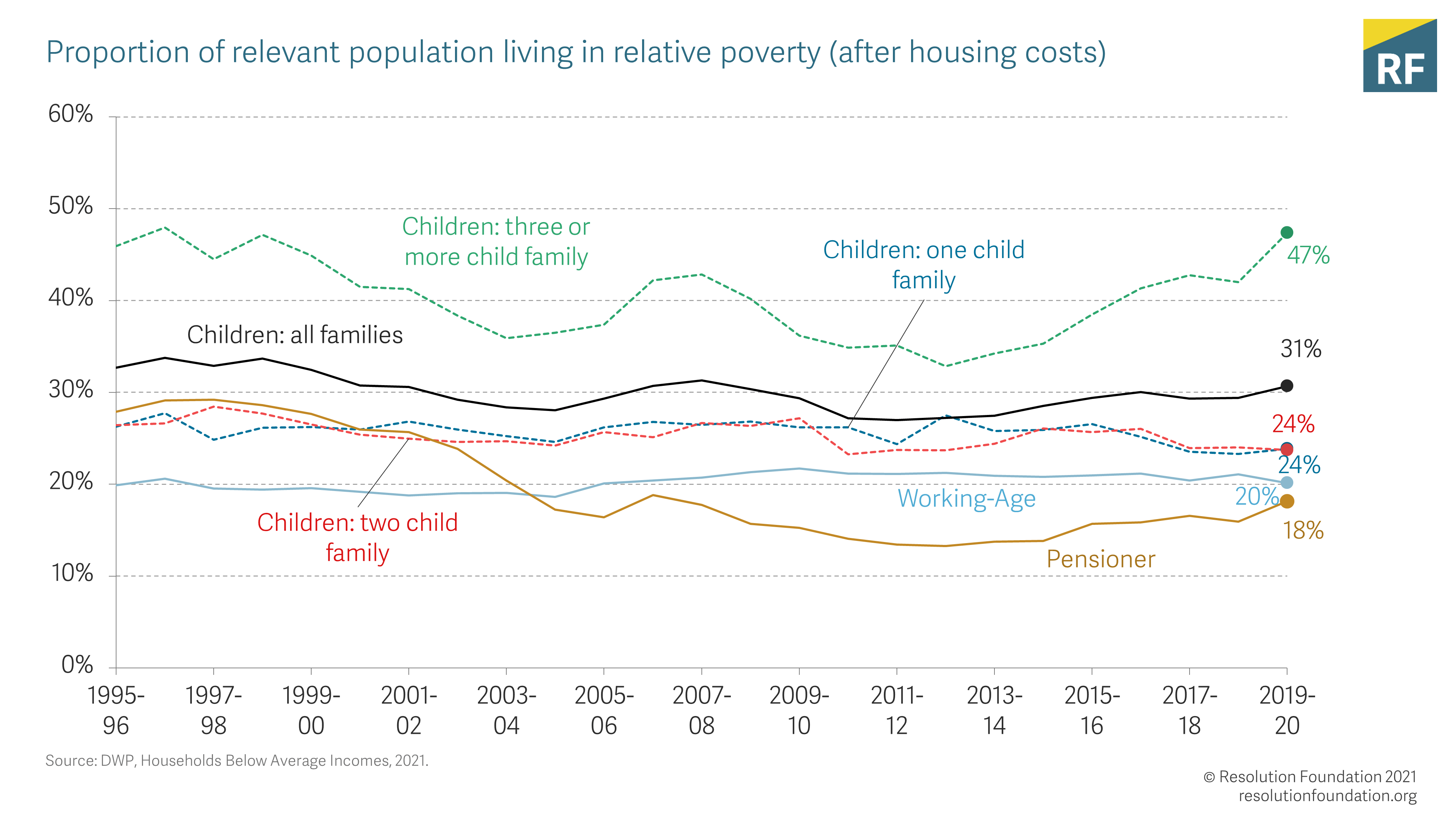