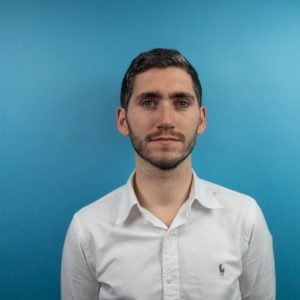 The Department for Work and Pensions (DWP) today published statistics on household incomes and poverty covering  2019-20. Because producing these estimates is a time-consuming process – both for the households who are surveyed and the statisticians processing the data into interesting statistics – the results are already a year out of date, and tell us only about incomes before the Covid-19 pandemic. Nonetheless, they provide a rich insight into households’ living standards before the crisis, and provide a benchmark against which we can measure family incomes during the recovery period.

Typical incomes grew at the fastest rate since 2001-02, but not enough to stop the decade having the worst income growth on record

We already knew that earnings growth was stronger in 2019-20 than the previous two years, and that inflation was lower, so some real growth in incomes was expected. However, the 4.5 per cent growth in typical incomes revealed in today’s figures exceeded expectations, and is the highest growth in incomes since 2001-02. But this must be considered in the context of two years of falls in typical incomes, and past ten years as a whole have seen income growth of just 8.7 per cent – an annualised average of 0.8 per cent – which is the worst decade of growth on record since comparable data began in 1961. 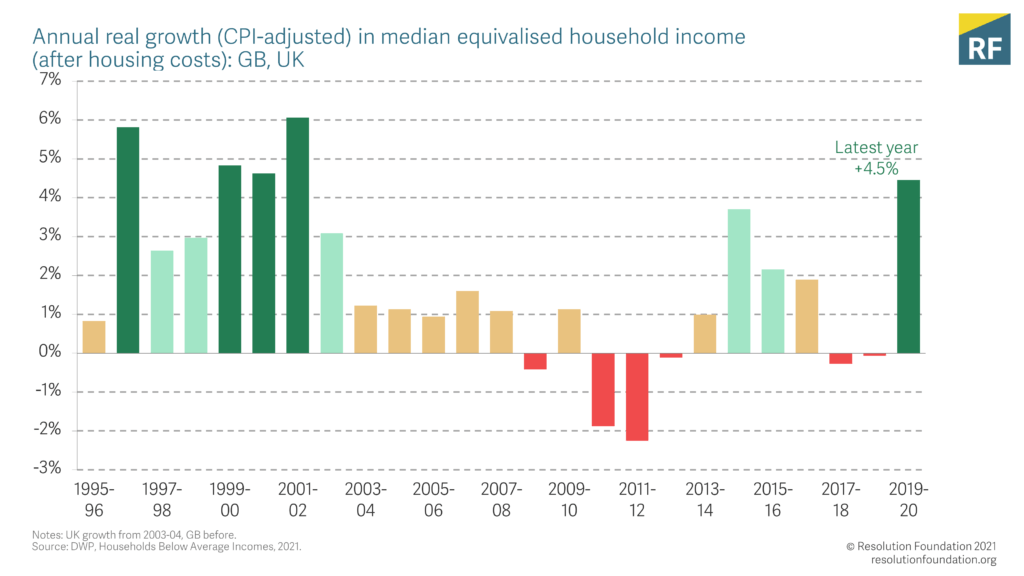 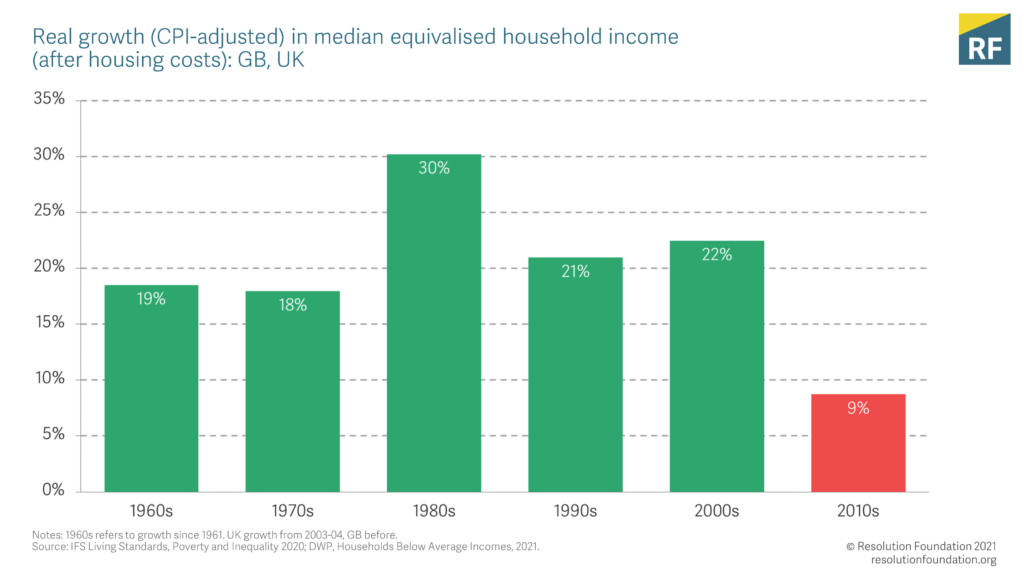 Over the last five years, the weakest income growth has been at the bottom of the income distribution

Income growth in 2019-20 varied significantly across the income distribution, and did so in an inequality-reducing way. The incomes of the poorest fifth of individuals were 6.3 per cent higher in 2019-20, compared to growth of 2.9 per cent for the richest fifth. However, this follows on from two years of falling incomes for the poorest households. On average over the last five years, the bottom quintile has seen lower income growth (0.9 per cent per year) than the better-off income quintiles. 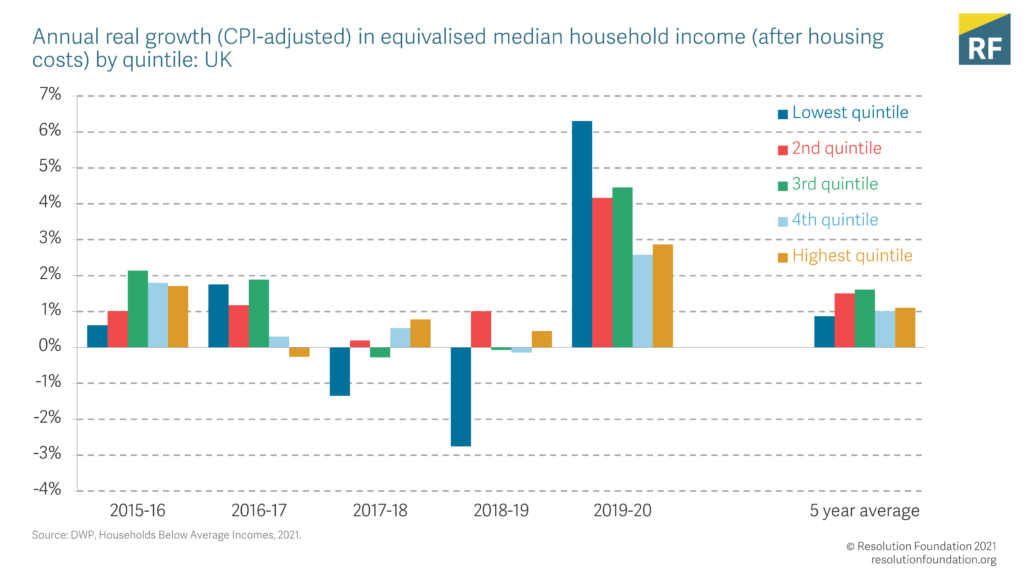 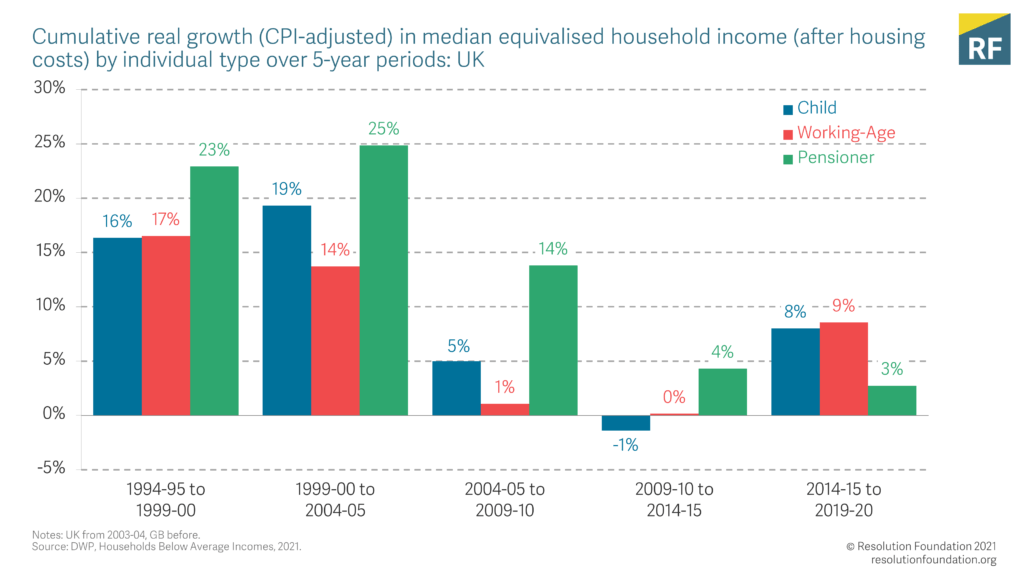 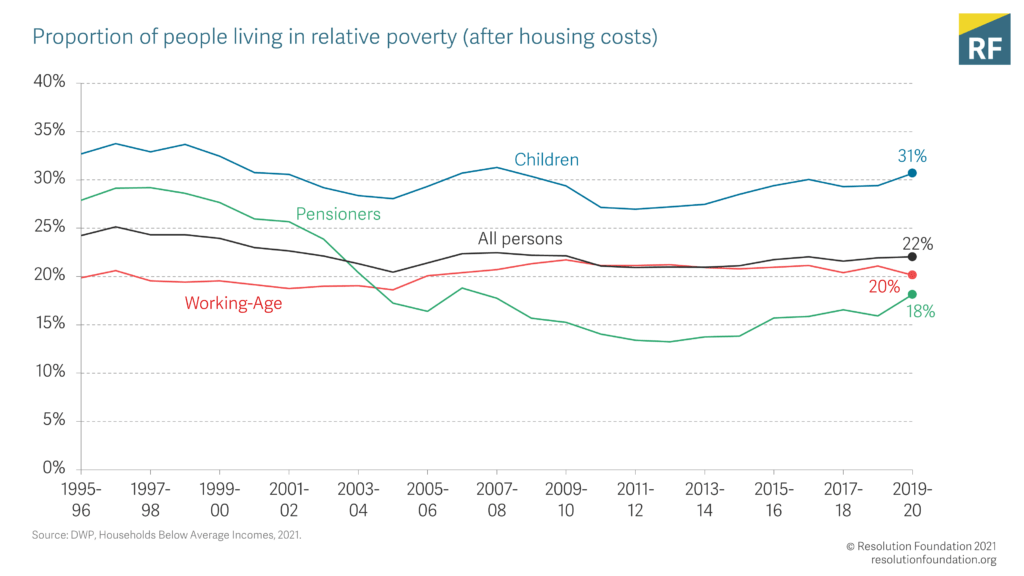 The overall relative poverty rate (after housing costs) remained unchanged in 2019-20 at 22 per cent (with a slight rise of 67,000 in the number of people in poverty). Within this, though, the rate of child poverty has risen, with 172,000 more children in poverty in 2019-20, meaning that 31 per cent of children (4.3 million) are living in households with incomes below the poverty threshold. 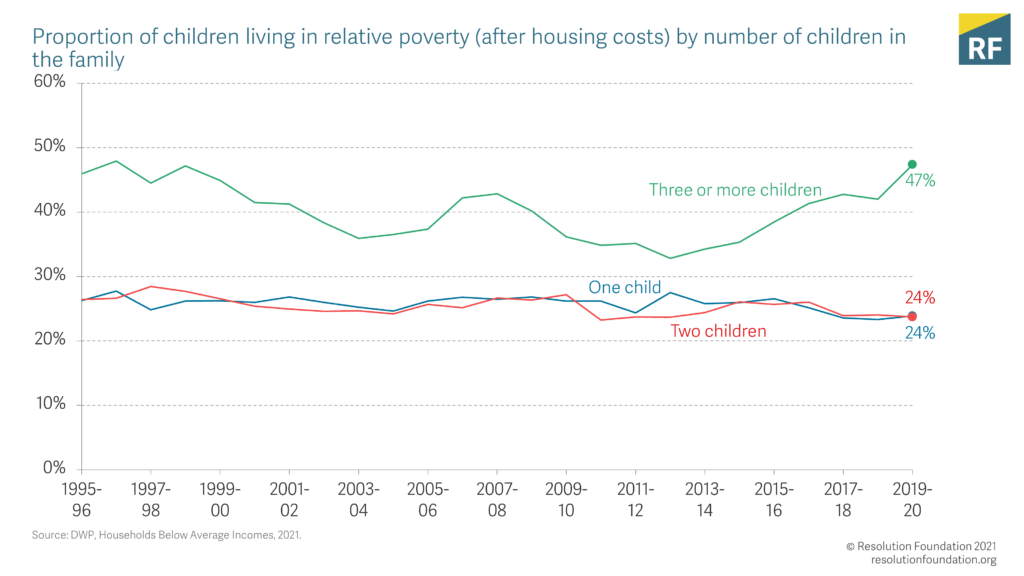 Despite the strong growth in incomes in the last year, and the strongest growth at the bottom of the distribution, the overall measures of income inequality for the UK remained relatively unchanged. The Gini index for 2019-20 was 39 per cent for incomes after housing costs – the seventh highest year since 1961. 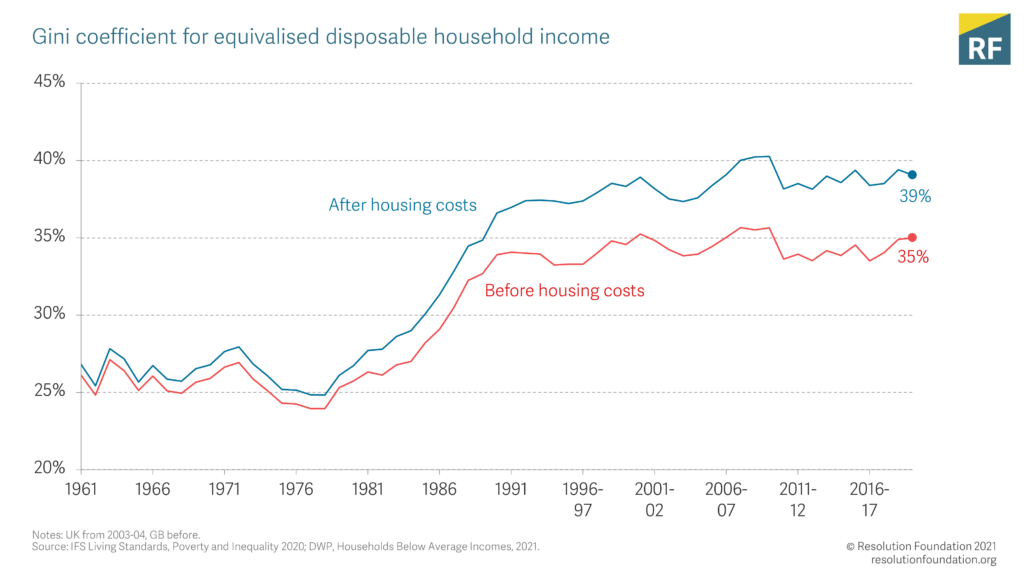 The Household Below Average Income (HBAI) statistics produced by DWP are not the only source of information on incomes in the UK. The ONS also produce income statistics based on the Living Costs and Food survey (LCFS) (these are produced on a before housing costs basis, but this is not the source of the discrepancy). Despite both being based on large samples, the two data sources have given substantively different estimates of median growth for the past few years. This has led to a confusing picture over household living standards, something that is a key indicator of our country’s economic performance. 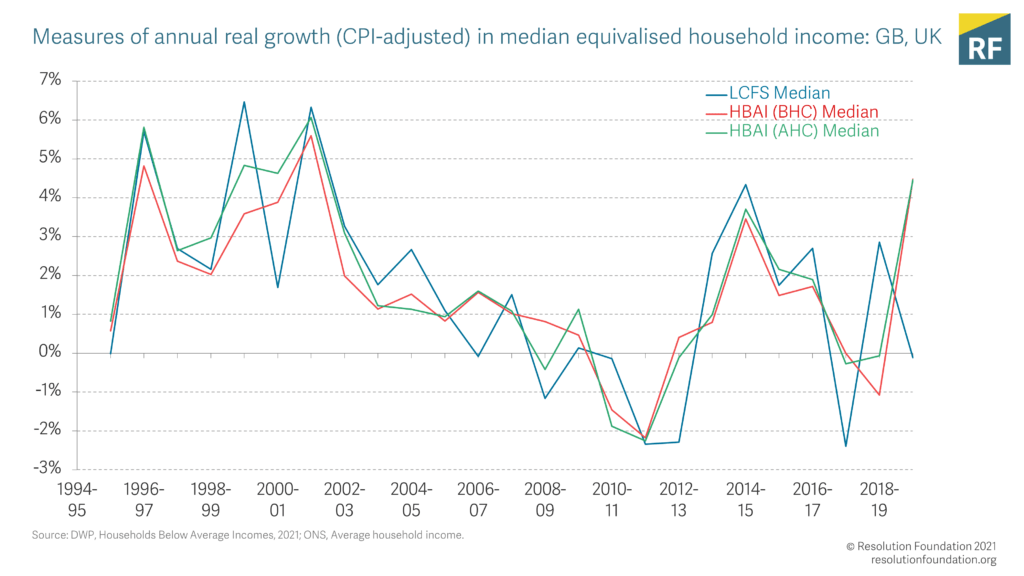 Surveying a large-enough sample of households to give accurate information on household incomes is an expensive and time-consuming process. Far from adding clarity, having two surveys producing estimates of the same concept actually makes it harder to understand how household incomes are changing. It would make far more sense for the survey resources to be merged together, giving a larger sample size and a clearer set of statistics. Until that happens, however, it is preferable to consider average income growth over multiple years. Despite having very different income growth figures for individual years, the annualised growth in median incomes (before housing costs) over the last five years is much more consistent between the two surveys, with the statistics from HBAI showing 7.3 per cent and those from the LCFS showing 6.7 per cent.

But today’s data is (almost) all from before the Covid-19 crisis hit. Government support schemes put in place over the Covid-19 pandemic have undoubtedly helped support households and prevented a living standards crisis. The OBR forecast that mean household incomes are set to fall by only 1.1 per cent in 2020, despite a fall in GDP of 9.9 per cent.

But lower-income families have still been disproportionately affected by the pandemic. With almost all the Government support coming to end in August later this year, and a likely rise in unemployment in the autumn, there is a risk that households – in particular the lowest-income households – will face worsening living standards. Hopefully 2019-20 will be a forebear of income growth yet to come, but relying on wishful thinking alone may lead the 2020s to being another lost decade of income growth.