Today the ONS released their latest statistics on well-being in the UK, as they have done since 2011. These stats have their sceptics, both over the maths involved and over the very idea you can measure happiness over time (let alone orient policy towards it). But they matter: self-assessed well-being gives us an insight into how people judge their own living standards, and it adds an angle that can be missed if living standards are tracked by income measures alone.

The subjective well-being movement has taken off in the past 20 years as more and more social scientists recognised that GDP alone isn’t enough to track how economic change affects normal people. In the aftermath of the financial crisis several governments started investigating how a broader range of economic and psychological factors could be used to measure living standards. Over the past decade the Resolution Foundation has played its part in this movement by charting the consequences of the financial crisis for living standards as measured – in our headline publications – by growth in median household incomes after housing costs, inflation-adjusted.

Recently we’ve been looking in more detail at the Office for National Statistics’ data on subjective-well-being, which they’ve collected since April 2011. The data comes from the Annual Population Survey, one of the ONS’s biggest household surveys, via four questions which ask people how satisfied they are with their lives nowadays, how worthwhile they feel the things in their life to be, and how happy and anxious they felt yesterday.

People’s responses to the four questions suggest a largely positive story – despite a limp recovery in incomes (real weekly wages remain £12 per week below their pre-crisis peak), people seem to be getting happier and more satisfied with their lives. Average happiness, for example, rose from 7.29 in 2011-12 to 7.52 in 2017-18, with 10 being the highest possible score (and 0 the lowest). 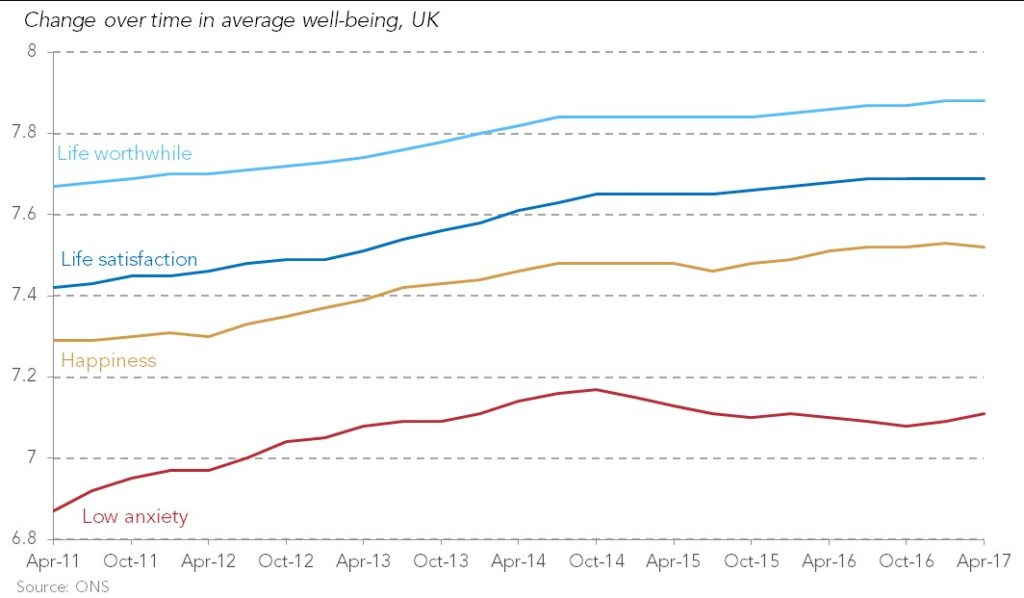 This is an important extra dimension in the measurement of living standards, and it isn’t immediately clear why well-being might have risen at such a pace. What could be going on?

The ONS have considered a wide range of other factors that might contribute to self-reported well-being. They’ve looked at health, physical activity, education and crime, access to services and community cohesion, to name but a few. No doubt these all have roles to play, in varying proportions around the country. Importantly, well-being research usually finds that individuals feel worse if they become unemployed, but our work so far suggests that the well-being increases shown above are not primarily a result of today’s 40-year record high employment levels or other bounce-back from the recession.

There’s a further puzzle (at least for economists) when we look at the regional statistics on well-being. Northern Ireland has been consistently the happiest region in the ONS statistics, despite being one of the poorer parts of the UK and its labour market performing relatively badly in the years since the financial crisis. If we look at a smaller scale, we see that the local authorities with the highest life satisfaction include Rushmoor, Bolsover, the far North of Scotland and parts of Northern Ireland, while the least satisfied places include parts of London that might be considered among the most economically prosperous areas of the UK. 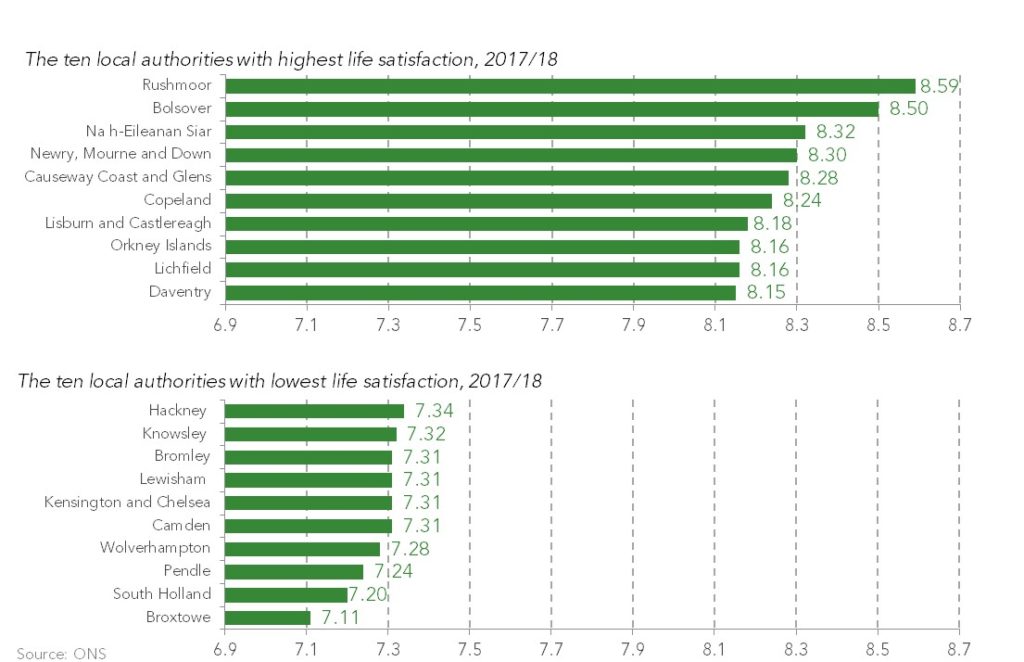 In short, there isn’t an obvious reason that jumps out as to why the British population are telling statisticians they’re getting happier, and more work needs to be done here. But well-being statistics are a good reality check for researchers like ourselves who spend our time chronicling the nation’s living standards. We’re hoping to shed more light on these questions in future work.