The UK is gearing up for another election, which means politicians of all parties fighting for the votes of what they call ‘ordinary’ or ‘hard-working’ people.

There are record numbers of people in work in the UK. So, what jobs do we do in Britain, how have they changed in recent years, and what might be on workers’ minds when they head out to vote?

A nation of service industry workers

When politicians want to appeal to working people they tend to don hard hats and head to factories or construction sites.

These workplaces may look good in pictures, but they do not chime with most people’s experience of work.

Fewer than one-in-ten people work in manufacturing, and even fewer in construction. 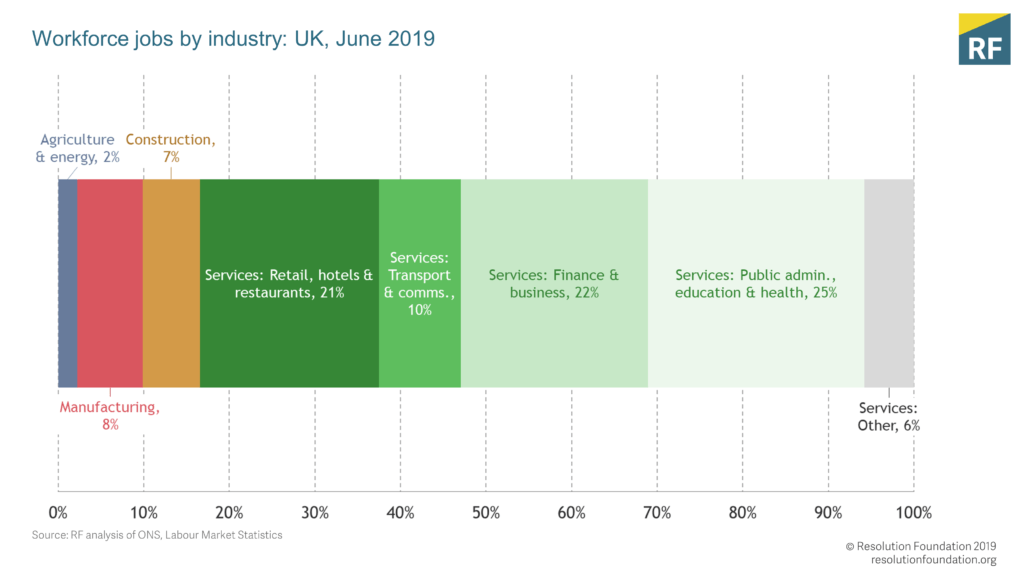 In contrast, more than four-in-five people work in service industries.

This covers everything from bank workers to plumbers and restaurant staff – the businesses that provide work for customers, but which don’t manufacture things.

These service sector jobs have grown over time: 25 years ago they made up just three-quarters of employment.

The biggest growth since then has been in public administration, education and health.

Not all service sector jobs are growing though. The recent woes of the retail sector have been well documented, but its share of the overall workforce started to shrink as far back as 2003.

Workers are older and more likely to be female

The world of work may once have been a man’s world, but that is no longer the case.

At the start of the 1970s, a little over one third of workers were women. 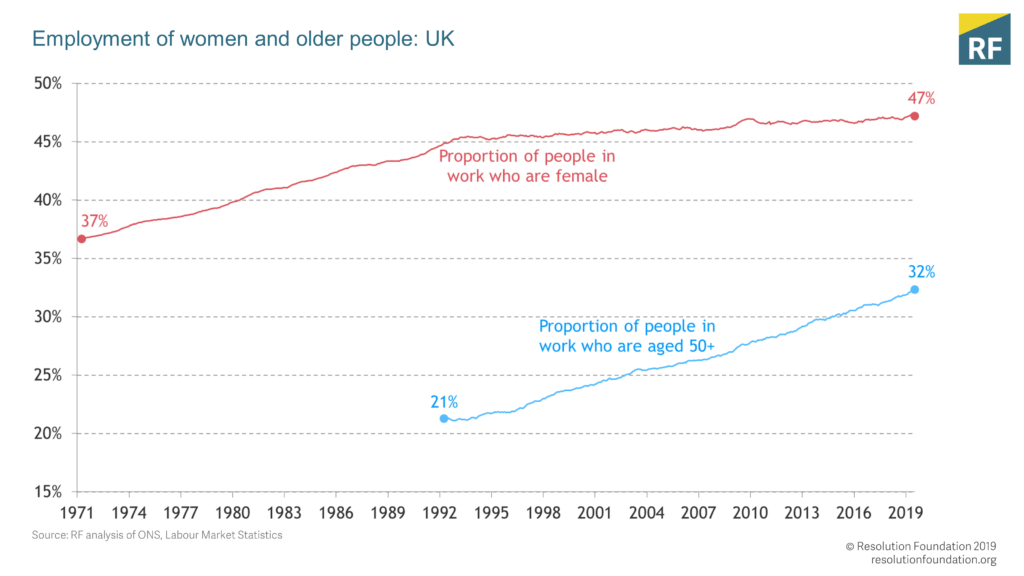 But rapid growth in female employment during the 1970s and 1980s means that women now make up almost half of the workforce.

However, there are still big challenges in terms of how men and women experience work, like the enduring gender pay gap – which is 17.3 per cent for all employees and 8.9 per cent among full-time staff.

Nonetheless, rising female employment has been one of the key drivers of improvements in living standards over the past 50 years.

Nearly one-in-three people in work is now aged 50 and over, compared to just over one-in-five back in 1992.

This trend is being driven by rising life expectancy, the progress of the large baby boomer generation through their careers and policy changes like the increasing State Pension age.

The changing nature of work, and the jobs people do to make ends meet, have become increasingly important issues.

Over the past decade we’ve heard a lot about the rise of zero-hours contracts, and the emerging gig economy. 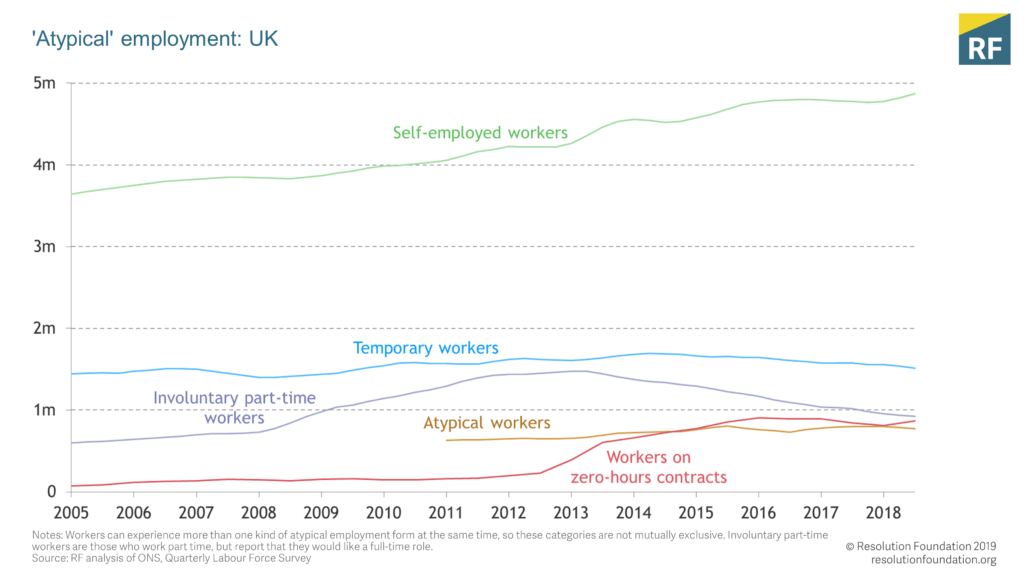 The term is often used to describe short-term casual work, although there is some disagreement about exactly what it means and the number of jobs it includes.

However, what is clear is that ways of working that might be thought of as ‘atypical’ have increased.

In the UK, there are nearly five million self-employed people, from highly-paid management consultants to delivery drivers – an increase of more than 50 per cent since the turn of the millennium.

These less traditional forms of employment grew markedly in the mid-2010s. But their share of the labour market has fallen slightly since then as Britain’s employment rate has risen.

It may be that firms have had to improve work conditions – for example by offering permanent, fixed-hours contracts – as they find it harder to recruit.

But these falls have been small, suggesting atypical employment isn’t going anywhere.

A traditional full-time job is still the norm

Although the world of work is evolving, it is still the case that most people have what might be called traditional jobs.

Nearly two-thirds of people in work have full-time roles for an employer – a proportion that has fallen only slightly since the early 1990s. 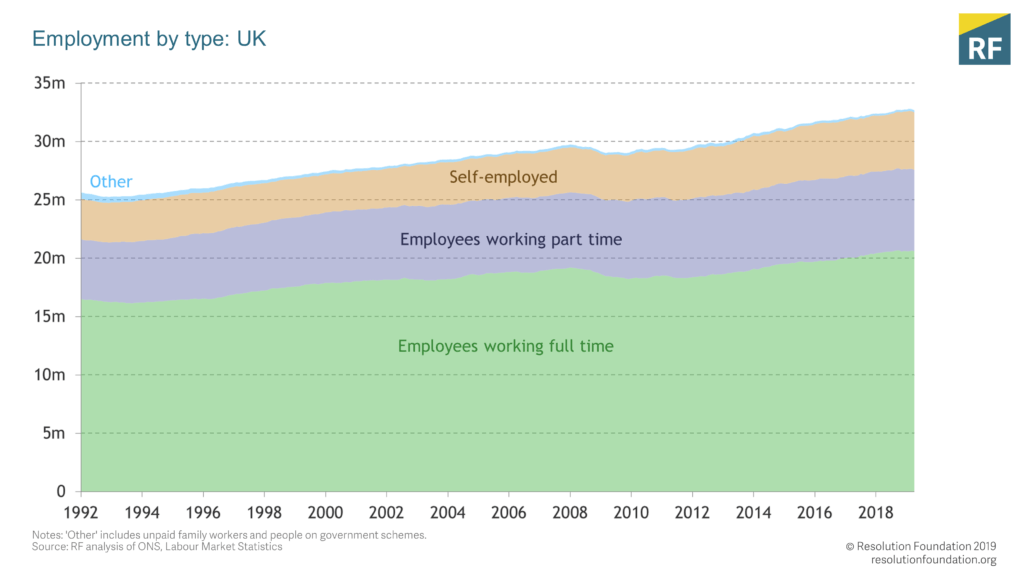 But what constitutes a day’s work has changed over time. For the past 150 years, we have consistently opted to work less as average hourly pay has risen. The average working week is now 32 hours long, down from 56 a century ago. But since the 2007-08 financial crisis our working week has stopped shrinking, possibly because the squeeze on incomes has meant that workers are keen to make extra cash. 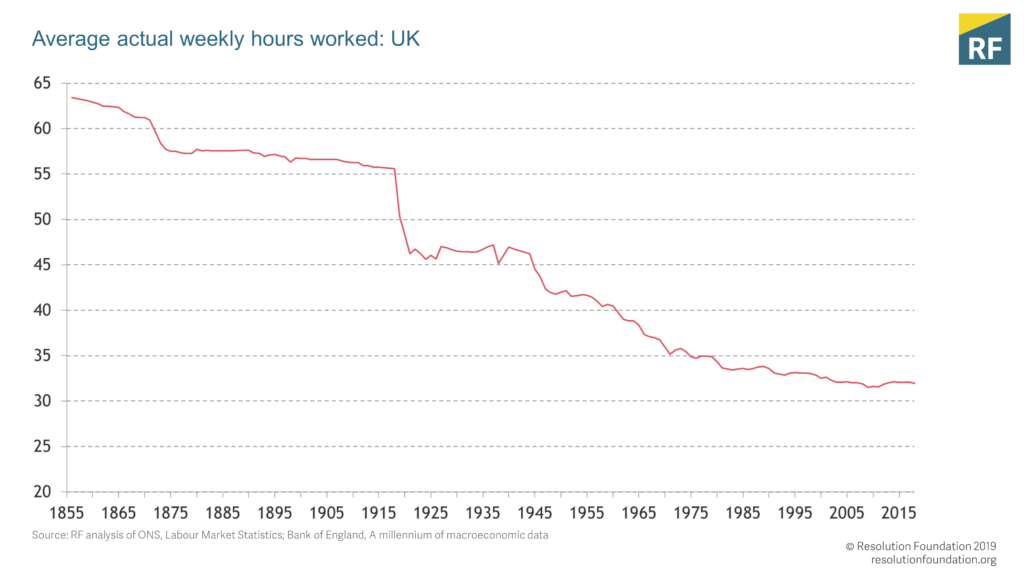 For most people, living standards are determined by whether they have a job – and how much they get paid.

For the lowest-paid workers, the introduction of the National Minimum Wage in 1999 set a minimum hourly rate for the first time. 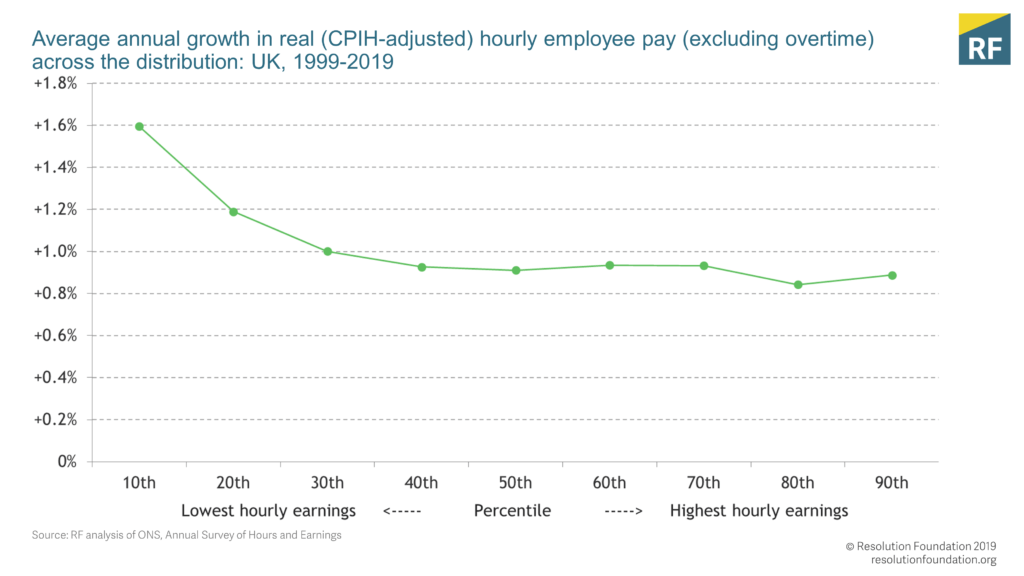 It has since risen faster than both inflation and average earnings. As a result, hourly pay for the lowest earners has risen nearly twice as fast as average pay over the last 20 years.

The National Living Wage – the higher wage floor for workers aged 25 and over – has taken the minimum wage to new heights. What happens next is set to be a key talking point in the election, and a big decision for the next government.

Britain is on the brink of returning to ‘peak pay’, but some groups have been left behind

Britain has experienced an unprecedented pay squeeze over the past decade. But the 2019 picture has been more positive, with real pay growth approaching its pre-crisis average of around 2 per cent a year.

Average pay looks set to finally surpass its August 2007 peak later this year – just in time for the election.

Some groups are still in the midst of the pay downturn. This includes 30-somethings, many of whom entered the labour market at the height of the crisis, along with public sector workers and those in the South East. 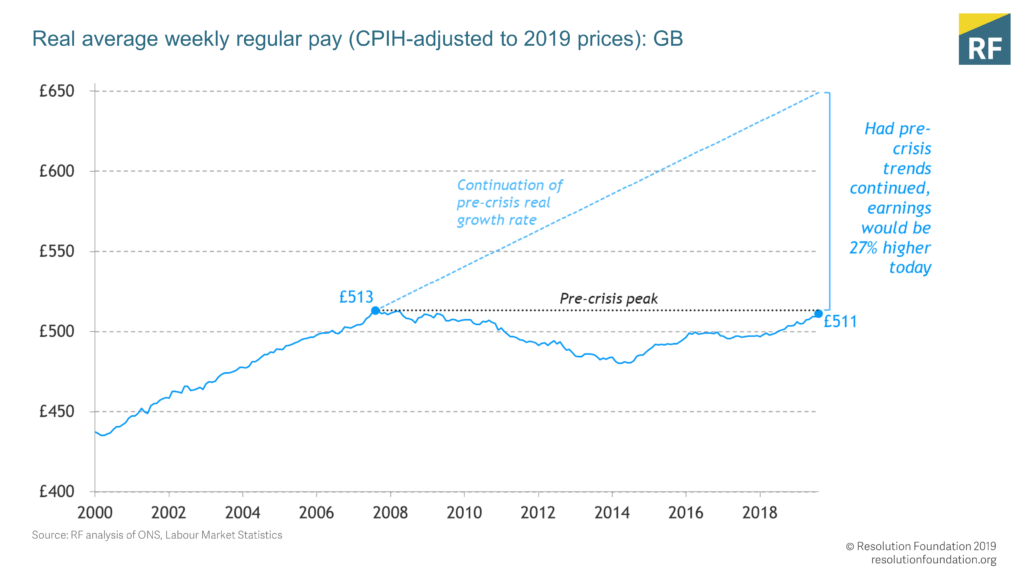 The return to ‘peak pay’ is an important living standards milestone. But it’s worth noting that had pay consistently grown at 2 per cent per year, rather than getting stuck in a 12-year downturn, then the average weekly salary today would be £138 higher.