The politics of the minimum wage don’t exactly fit our lazy stereotypes. Back in the pre-crisis days of supposed consensus, debates raged about whether the policy was right or wrong. Today, when political divides are huge, everyone is falling over themselves to agree that a higher minimum wage is the way to go.

The Chancellor is the latest to join in, with a plan to eliminate low pay over the next five years. To do this he plans to raise the National Living Wage (NLW) to £10.50 in 2024, equal to two-thirds of typical hourly pay (a common definition of low pay). Sajid Javid is building on George Osborne’s 2015 announcement of the NLW, which has seen the wage floor rising twice as fast as typical earnings in recent years. 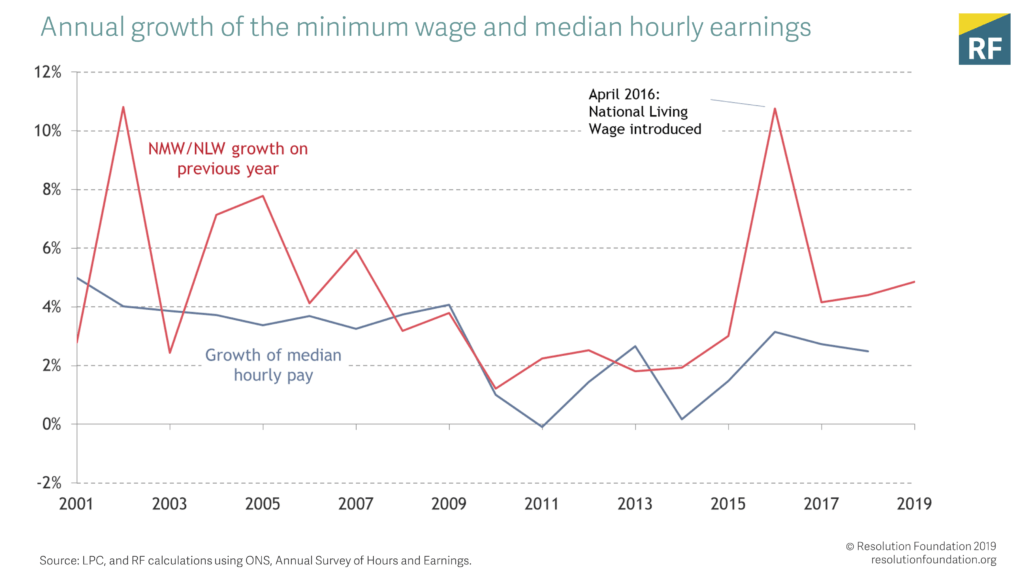 It’s not hard to see why both main parties now support a higher minimum wage. The policy has been a huge success in an area that has amounted to a national disaster (average pay remains £3 a week below its pre-crisis peak). The wages of the low-paid have grown much faster than other workers and, far from costing jobs, the minimum wage has been accompanied by the UK employment rate reaching its highest level since World War II.

But while the Chancellor’s policy might sound like more of the same it is in fact still hugely ambitious. It’s a big deal for low-paid workers – but also for our economy. Raising the NLW to £10.50 in 2024 would see a worker (aged 25+) on the wage floor earn around 70p an hour more than they would have done if the previous plans for the NLW had been maintained. That’s equivalent to an extra £1,400 a year for a full-time worker. 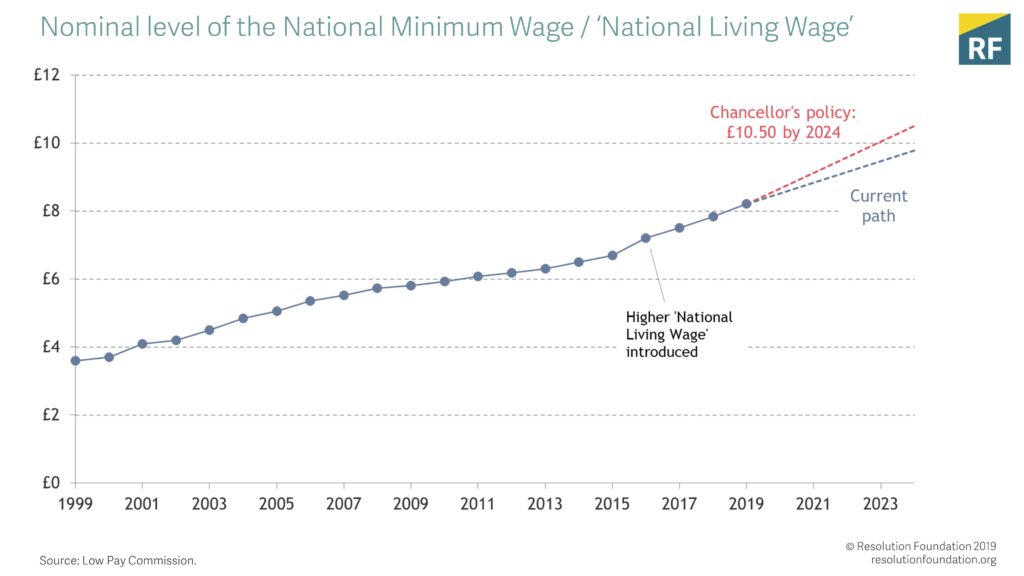 For the economy as a whole it’s worth remembering that already around 1 in 12 workers earn the legal minimum, including over 1 in 4 in the hospitality industry. Achieving the Chancellor’s objective of reaching the low-pay threshold could more than double the number of people on the wage floor. This could include more than one in three part-time workers and more than one-in-five workers across Wales, the Midlands and the North of England. That is a lot of people having their wages set by the state.

The announcement is also more ambitious than we might have expected because it includes younger workers. The Chancellor announced an extension of coverage of the NLW to everyone aged 21+ in 2024, with a phasing in for workers aged 23+ in 2021. This is a big deal for the 605,000 people between the ages of 21 and 24 who were low-paid last year, including 175,000 who were paid below the NLW. These plans will deliver a major pay boost to many younger workers.

So this is an ambitious policy, building on a history of the minimum wage’s success. But announcing the policy is the easy part. History is after all only a partial guide to the future – just because previous rises in the minimum wage have not had significant downsides, doesn’t mean that will always be the case. This is particularly true when the planned further increases will take the UK to the top of the international league table of minimum wages, alongside New Zealand and France. 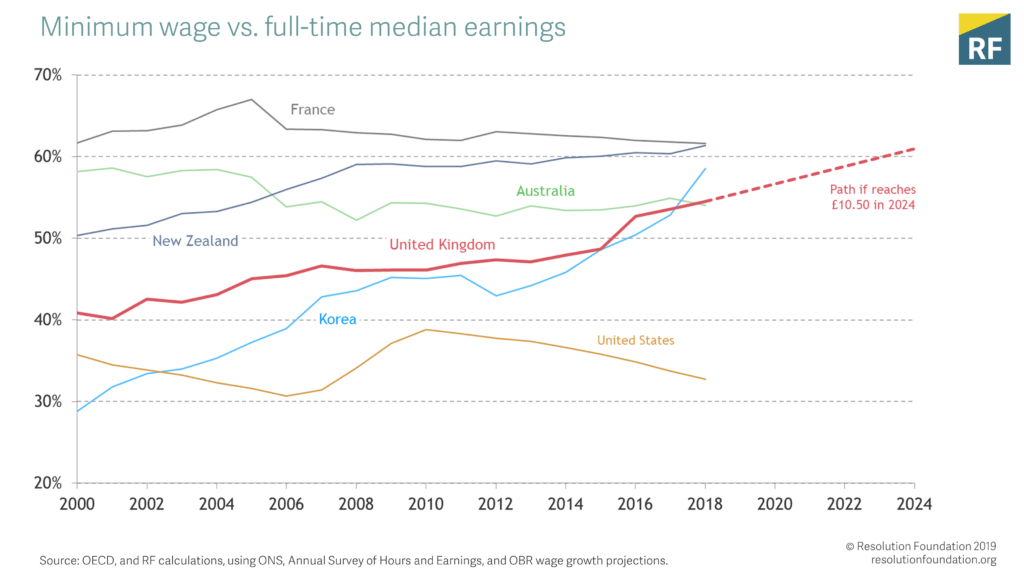 That is why the government should closely involve the Low Pay Commission (the body set up to advice on the minimum wage, and who have supported plans to extend coverage of the NLW to younger workers), monitor progress for any employment effects, and spell out that they would be prepared to change course if problems do emerge. The same considerations apply, with more urgency, to Labour’s plan to introduce a £10 minimum wage as soon as possible. If that happened in 2020 it would be more ambitious than the government’s plans – with the immediate timing of both the increase and application to all workers over 16 the key difference. 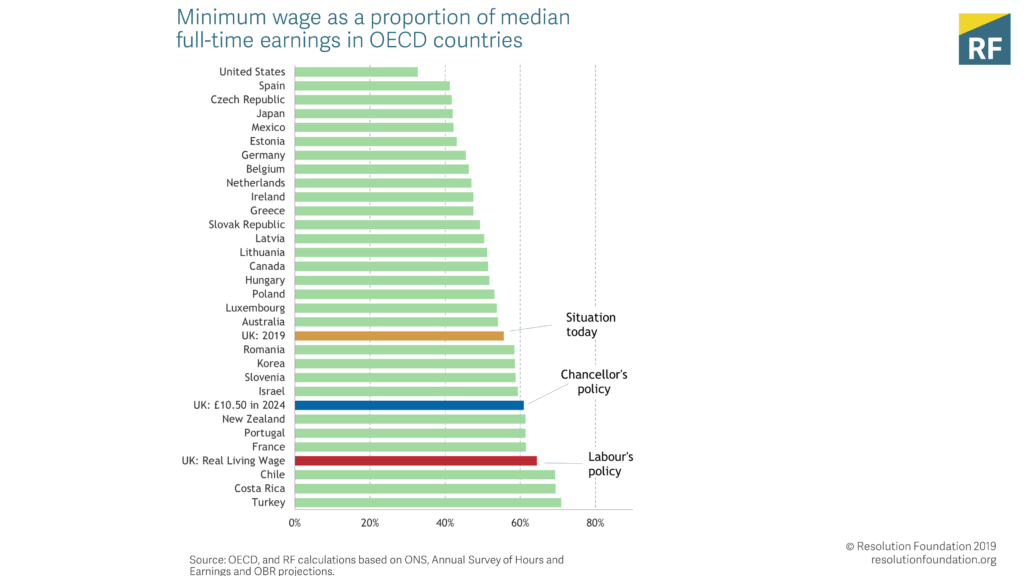 It’s also important for both main parties to recognise the wider policy challenges that lie beyond the scope of the minimum wage. In particular, a higher minimum wage cannot solve the projected increases in child poverty in the coming years, and it is not an alternative to a decent social security system which takes into account a household’s overall income and cost pressures – a technical term for kids and housing. Only 1 in 5 workers on or near the minimum wage receive means-tested benefits, rising to almost half of those in their late 30s (when kids are most likely to be around). Similarly, higher hourly pay doesn’t solve the problem for workers that can’t get the hours they need for a decent income – which unsurprisingly is a particular problem for lower earners.

But just because tackling low pay can’t solve poverty, that doesn’t mean we should understate quite how drastic changes to the low pay landscape have been in recent years. For most of the last two decades around one in five workers has been in low-paid work at any given time. But that has now started to change. Last year there were almost a million fewer workers in low-paid jobs compared to 2015. Over time this will make our firms less reliant on low-paid labour, changing not just household finances but our economic model. How that plays out remains to be seen. But building an economy that values and invests in its workers is something that people right across our politics should agree on.