Today’s labour market data tell us a bit more about how the labour market is responding to high inflation and the cost of living shock. We see some things we would expect, some things which may be surprising, and much that remains unresolved.

Real wages fall at the fastest rate on record

The most eye-popping statistic in today’s labour market data is also the one that is easiest to explain. Real regular pay fell by 2.8 per cent in the three months to May – the biggest fall since this measure was first recorded in 2001, and almost certainly for much longer – perhaps as much as 45 years. This is the simple consequence of unexceptional 4.3 per cent growth of nominal wages and very high CPIH inflation of 7.3 per cent. As price inflation accelerates, this measure of real pay is likely to continue to fall in annual terms for many months to come. 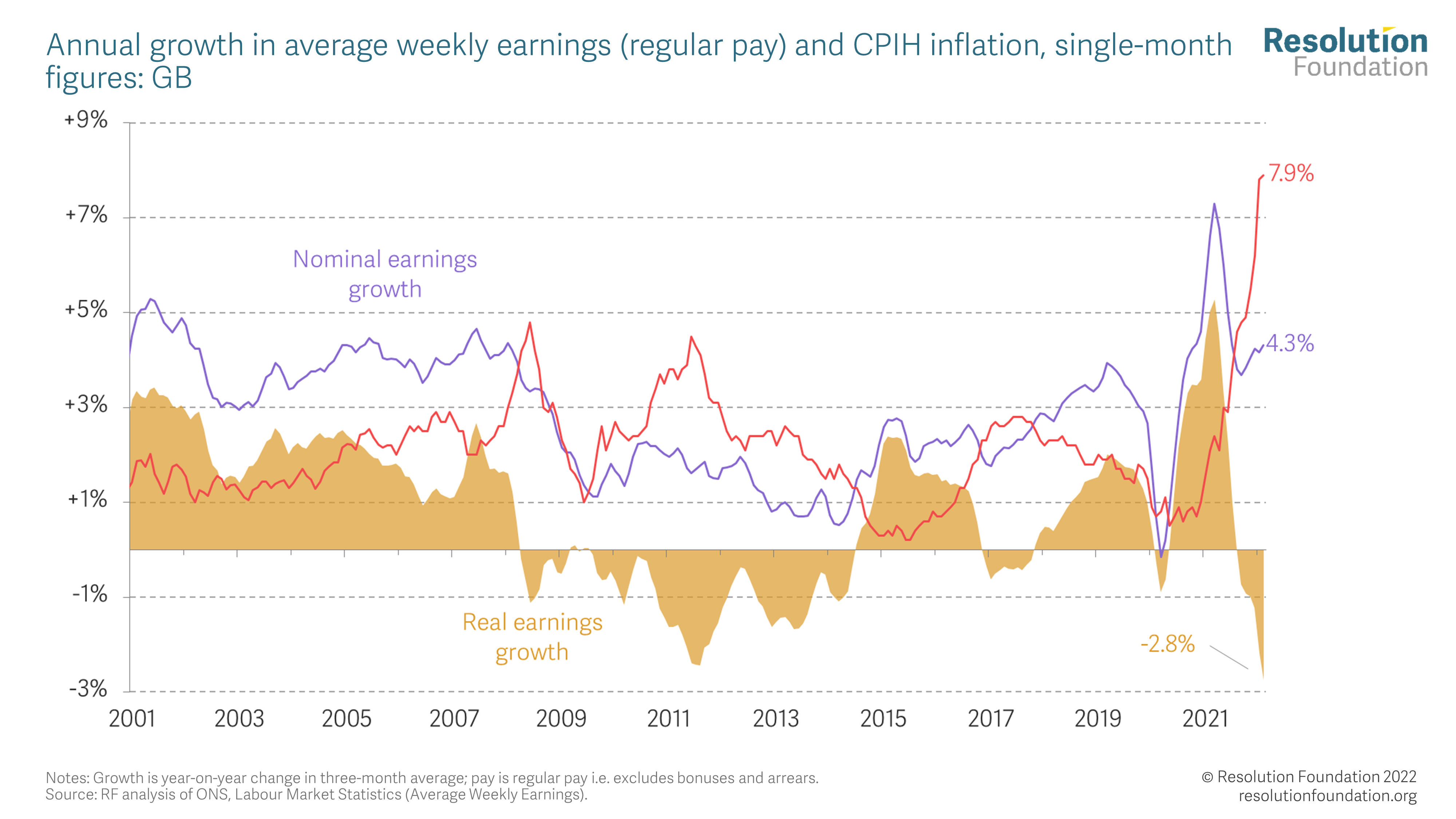 Worse still, pay growth is weakest at the bottom end of the labour market. HMRC’s data suggests annual growth in monthly pay in May was 1.3 per cent at the 10th percentile and 6.9 per cent at the 90th percentile (and even higher – 9.1 per cent – at the 99th percentile). This means that only the very highest earners are seeing above-inflation pay growth. Everyone else is experiencing a real pay squeeze – and particularly the lowest earners. Real pay growth at the 10th percentile stood at an eye watering -6.0 per cent in May. It’s worth noting that the movement of some self-employed workers into employee jobs, which has been concentrated among those in higher paid jobs, may have pushed up pay growth at the higher end of the payroll distribution. But this doesn’t explain why pay growth is so weak for the lowest earners. 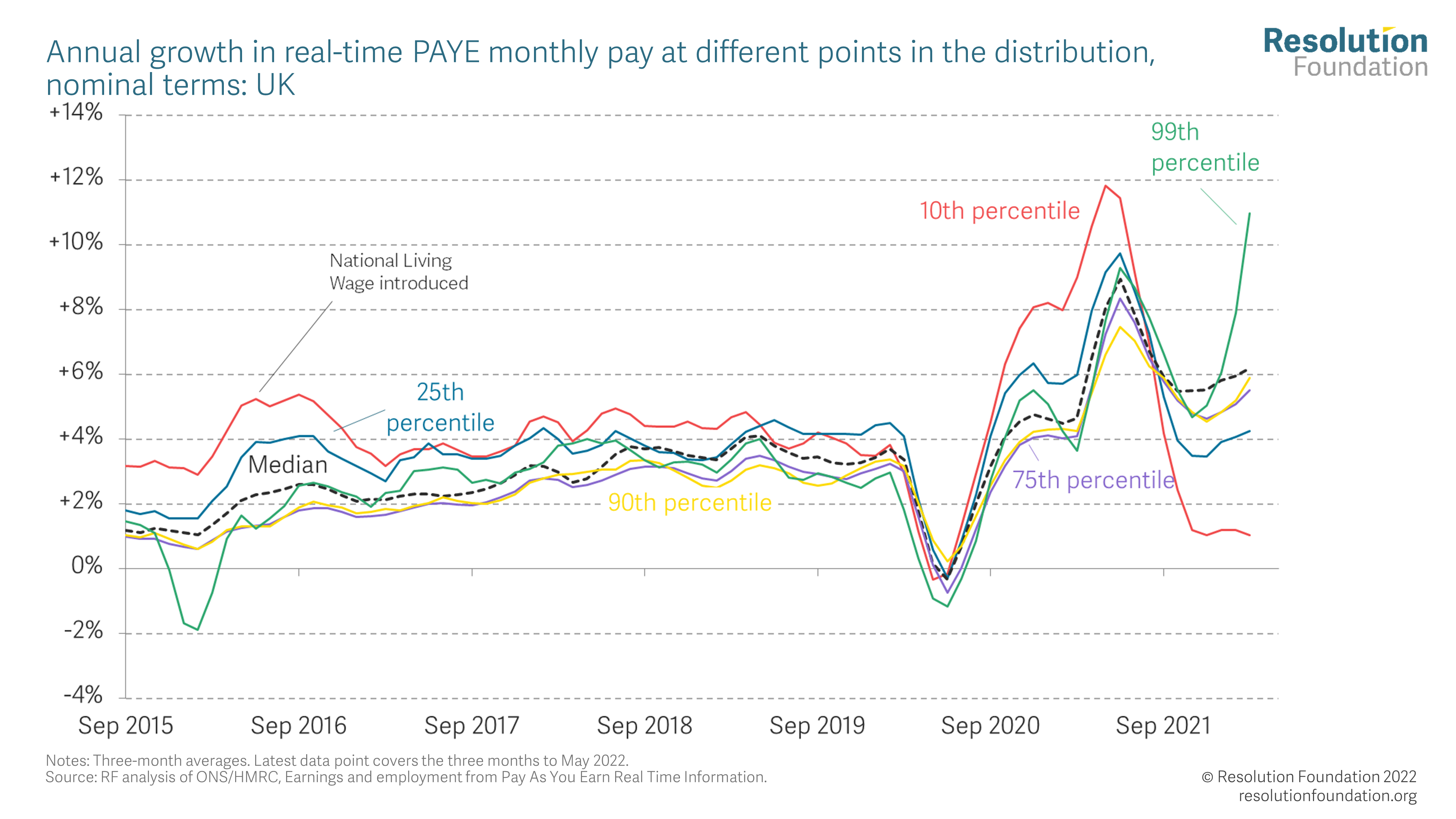 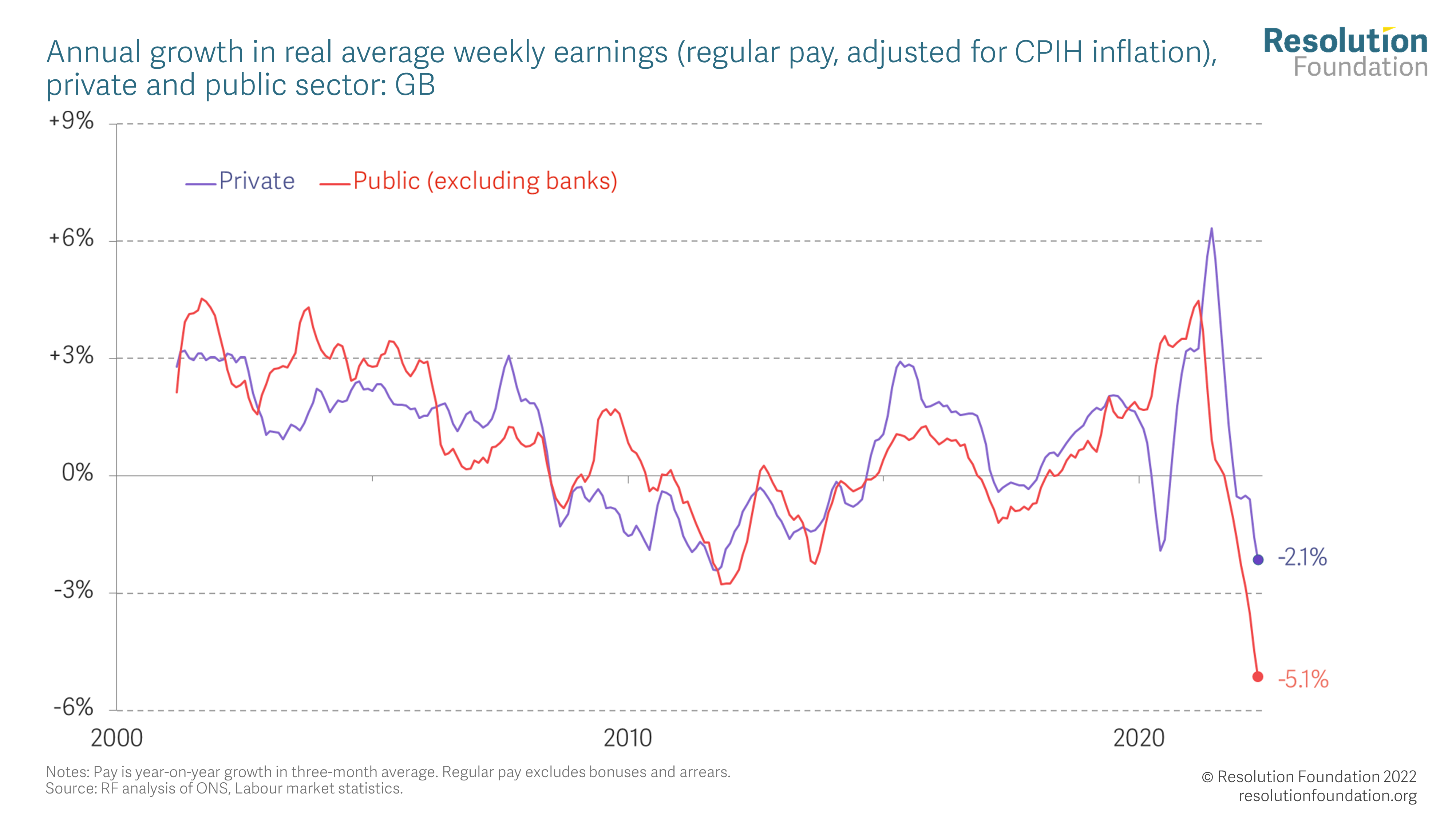 Workers are coming back in to the labour force

When real wages fall, labour supply can go up or down. It goes down if workers decide that working is no longer worth their while (a substitution effect). Or it goes up if workers decide they need to work more to maintain their standard of living, even if they get less for each extra hour (an income effect). Labour force participation rose sharply during the 2010s, again alongside weak real wages, as workers felt poor and worked more, consistent with the latter income effect dominating. 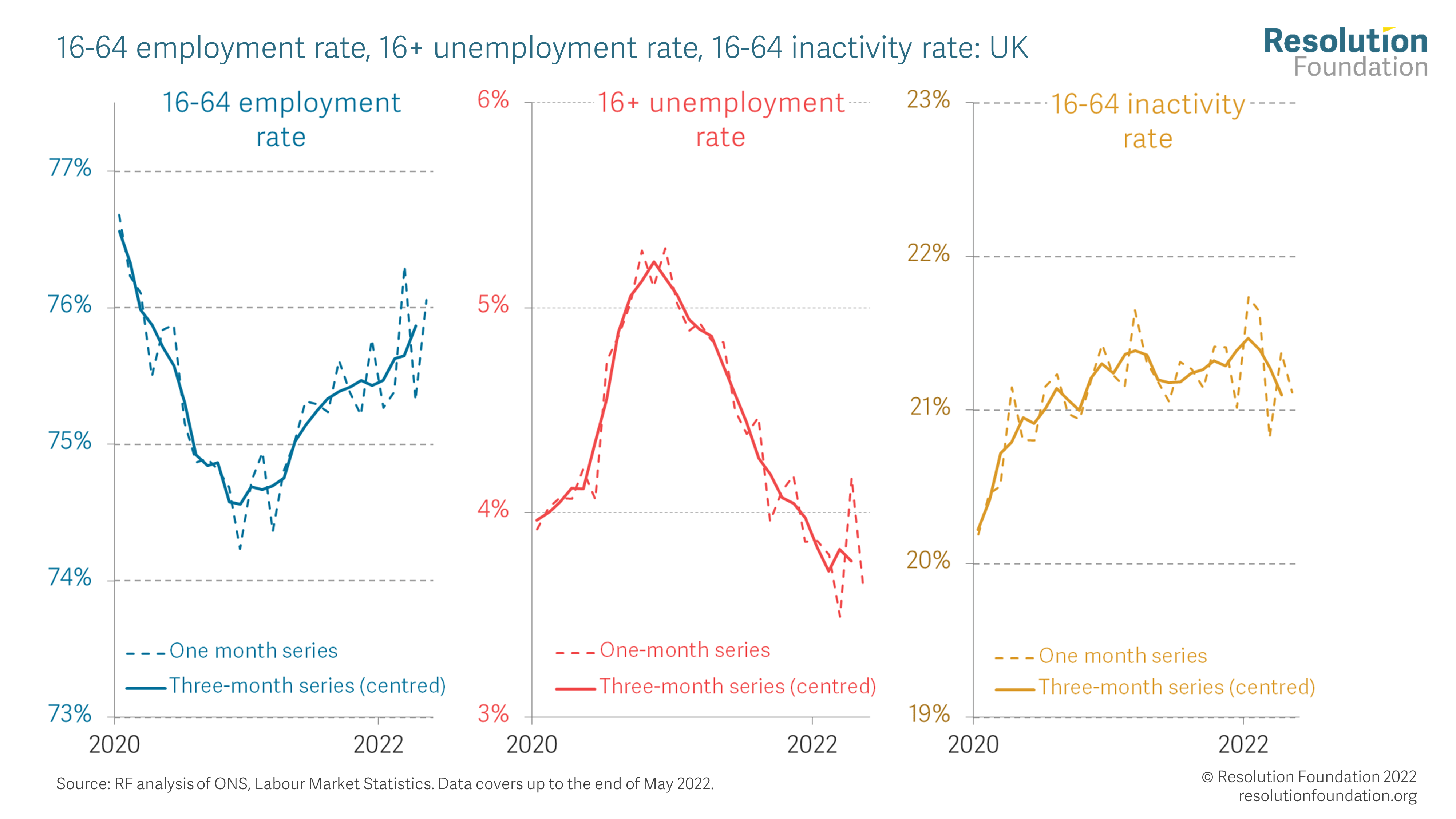 But then participation fell back a great deal during the pandemic, more than in most other countries, driven by students and the long-term sick, by the over-50s, and offset by falls in non-participation among those looking after home and family. Overall, inactivity rose by about 500,000 among the working-age population.

The latest data, which show participation rising in the face of very weak real wages, look like an extreme version of the 2010s. Over the past three months we have seen a partial reversal of this, with inactivity falling by about 225,000, driven by both students and older workers. This is good news for the public finances and the wider economy as these extra workers pay tax and gain skills, although rising student numbers can also be good for the economy in the long term. 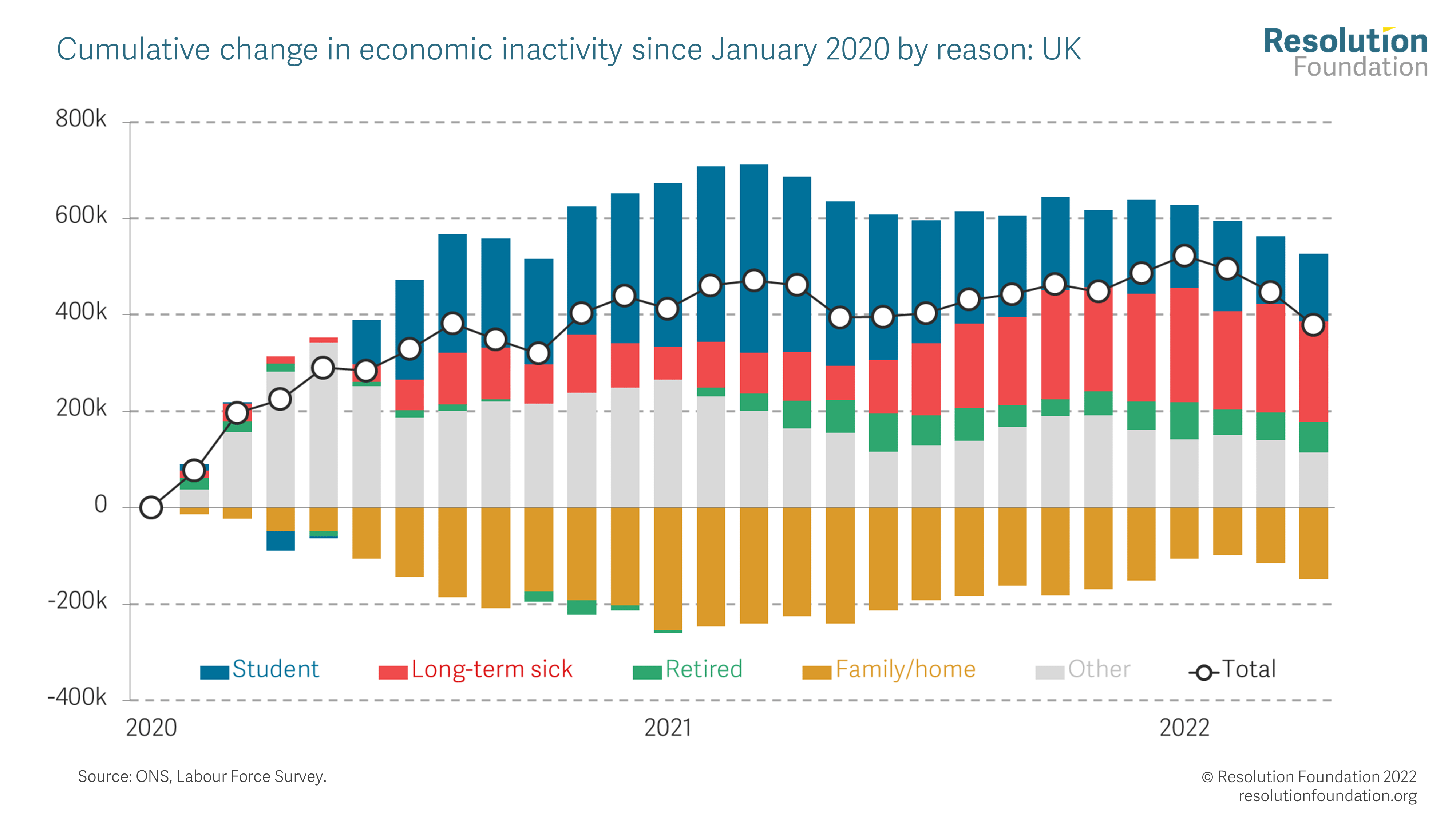 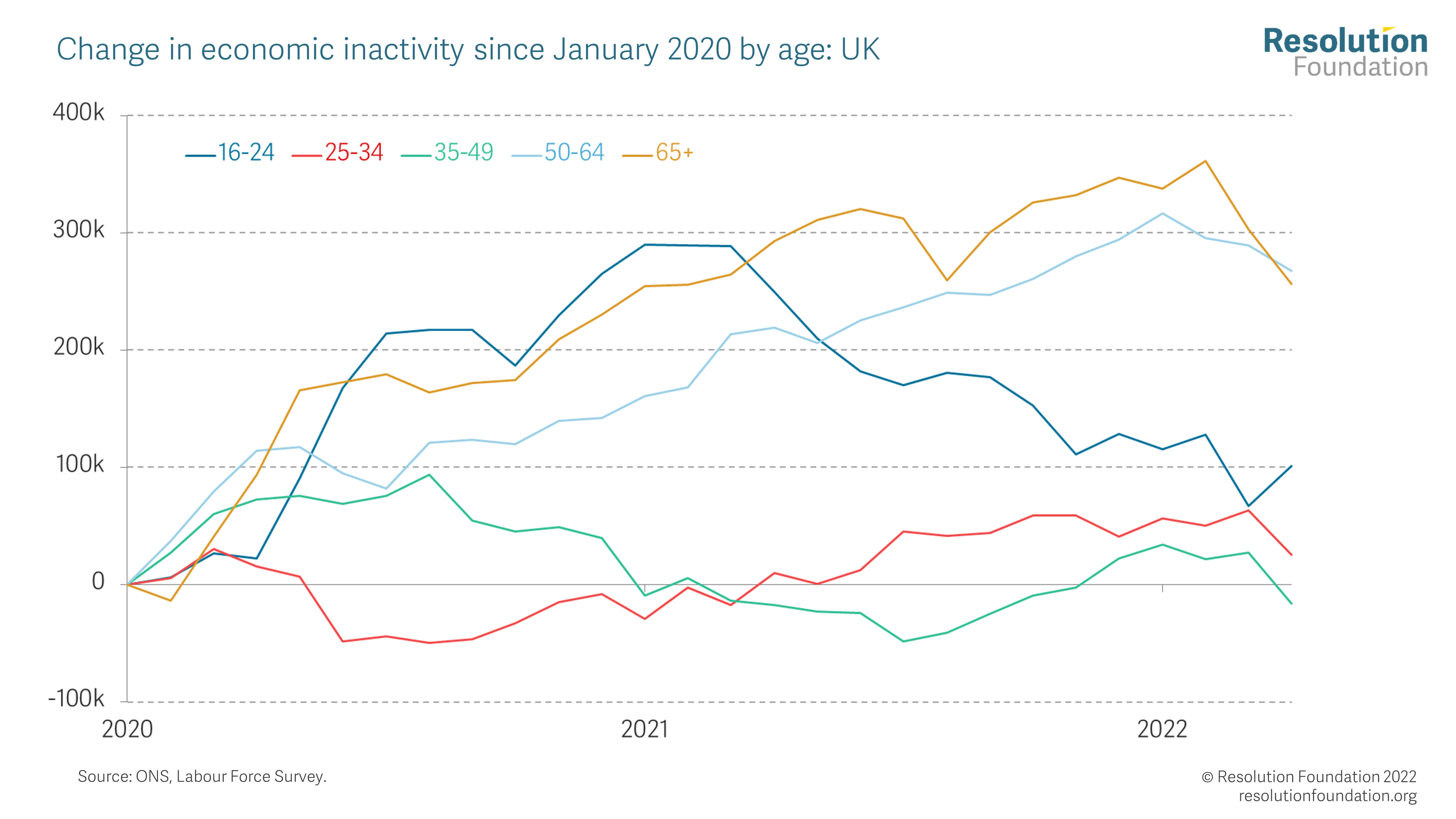 Labour demand remains strong – but for how long?

These extra workers hitting the labour market are finding jobs. The employment rate continued to increase, while the unemployment rate ticked down in the monthly and three-monthly data. The RTI data show inflows into employment of 739,000 in June – close to the record highs set in Spring 2021 and way higher than the average of 549,000 in 2019.

There are plenty of vacancies for workers to fill – some 1.29 million in Q2 – roughly the same as the number of unemployed people (which is the optimal number according to a recent paper). The growth in vacancies has slowed, however, and there are signs in the monthly and Adzuna data that the number of vacancies may now be starting to fall. 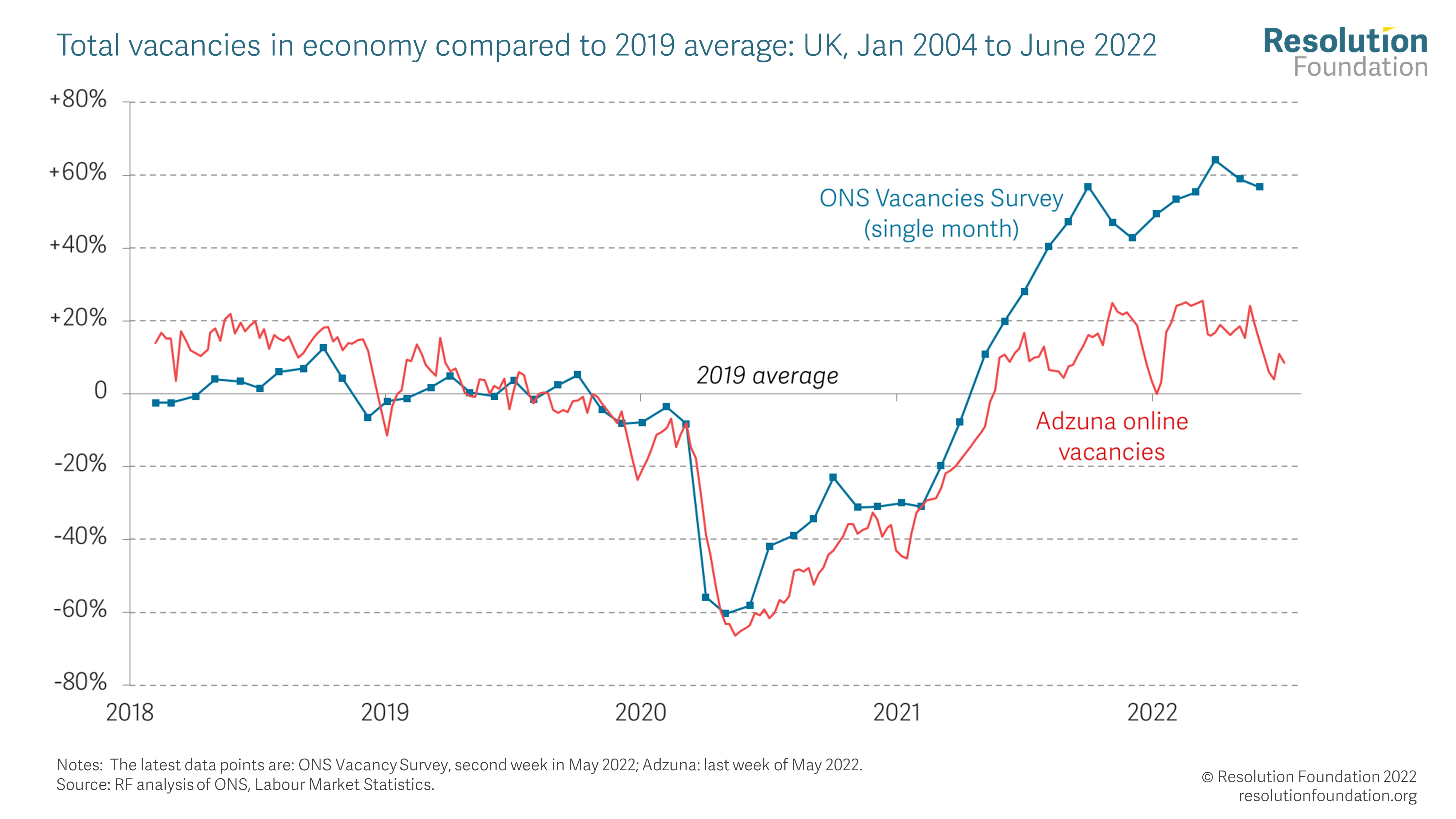 This softening in vacancies could be for different reasons. Maybe labour demand remains strong, and the vacancies are getting filled as employment rises. Or maybe labour demand is starting to weaken, as the cost of living crisis, driven by expensive imported food and fuel, leaves households with less money to spend on UK goods, and hence UK firms with less need for labour. Consistent with this, in 20 years we’ve never seen consumer confidence fall as much as it recently has without a subsequent rise in unemployment. 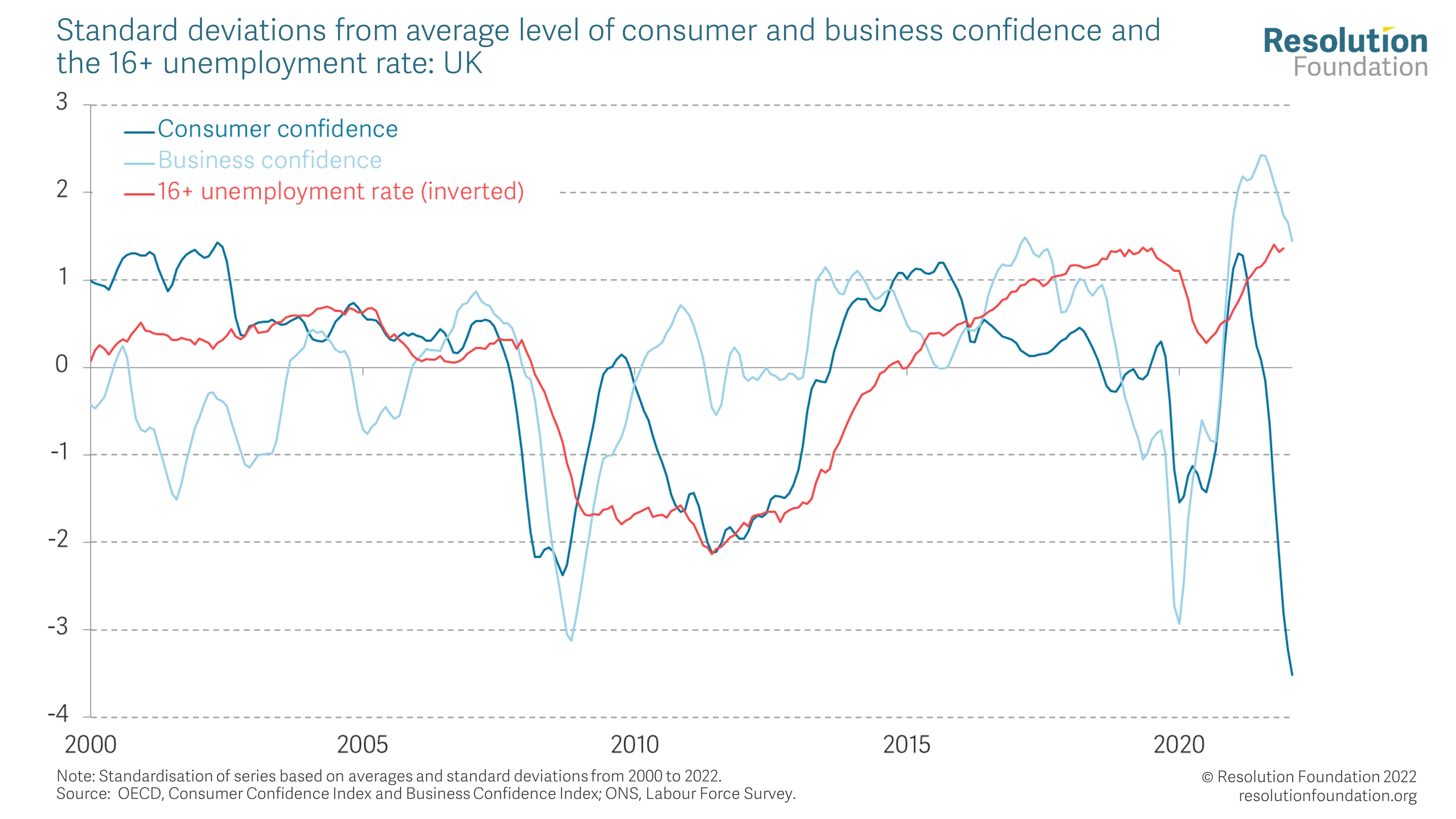 Nominal wage growth may be too high for the Bank

The balance of labour demand and labour supply will ultimately determine wage inflation, a key driver of inflation in the medium term, as the Bank of England keeps telling us. Total nominal pay grew by 6.2 per cent in the 3 months to May, and 7.2 per cent in the private sector – the strongest non-pandemic rate since February 2007. 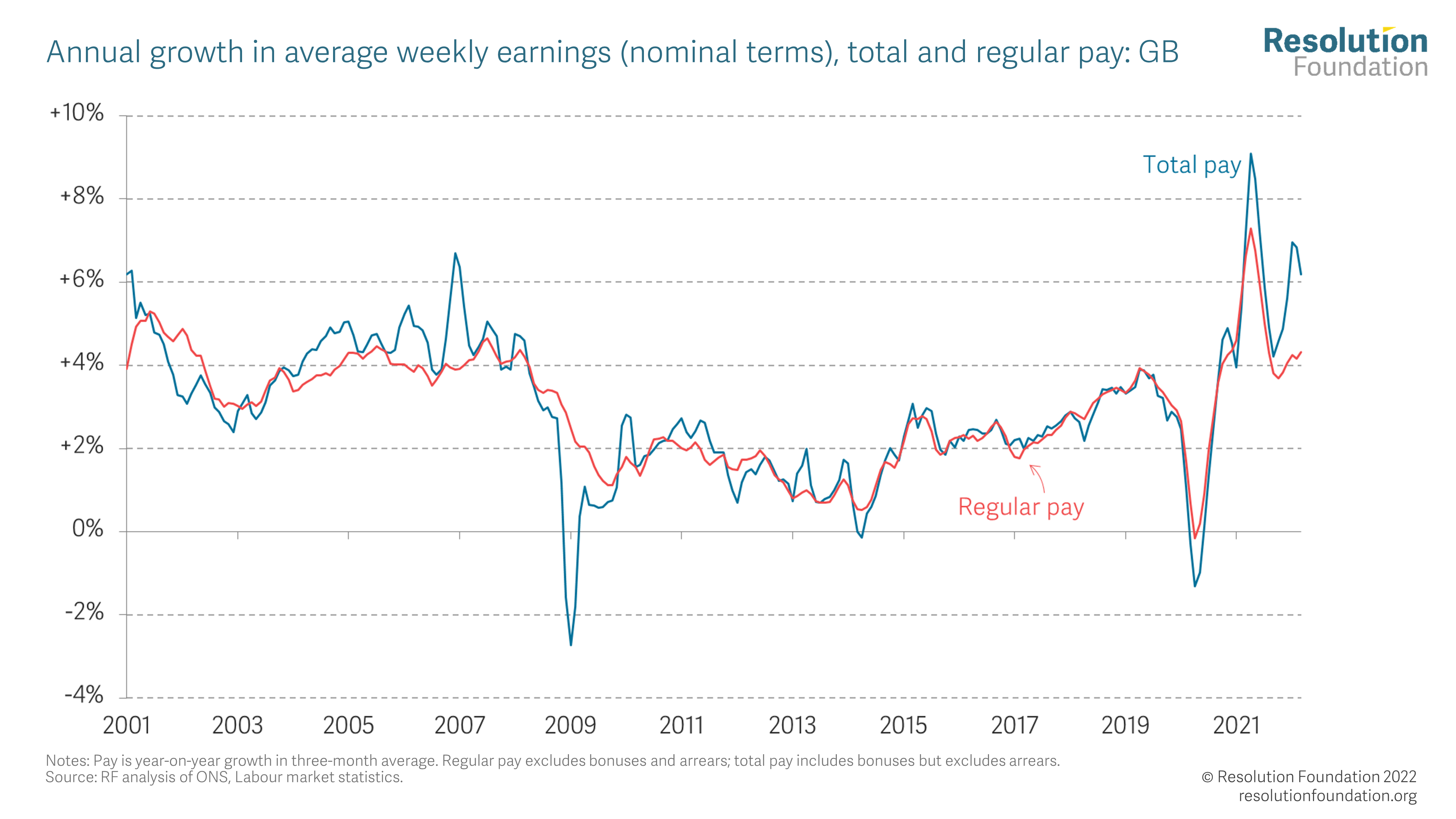 The big wedge between regular and total pay represents bonuses. It’s not clear which of these different measures is the most relevant for the marginal cost of production, and hence for inflation – bonuses to recruit and retain staff might well be considered marginal costs, while those paid for past good performance might not be. In this context, it is reassuring that the BICS data suggest that wages are not a major driver of price rises at the moment.

Overall, and along with last week’s surprisingly strong GDP data, these data paint a picture of an economy and a labour market that is (1) more resilient than we might have expected, (2) presenting something of a dilemma for the Bank of England and (3) producing terrible outcomes for wage earners and living standards.

For more on the inflation picture, look out for my colleague Jack Leslie’s must-read tweet thread on the CPI data tomorrow.