This morning the Department for Education (DfE) published figures on the number of apprenticeships that were started in July 2019 – the final month of the 2018/19 academic year. And although the numbers are still provisional, they provide us with a pretty clear picture of how things shaped up for the apprenticeships sector.

The big stories this year do seem a little familiar: there were fewer apprenticeship starts than in the years before the apprenticeship levy and wider regulatory forms came into play. Starts at Level 2 (GCSE-equivalent) continued to fall, while those at higher education-equivalent levels (Levels 4+) continued to rise. However, this post looks at trends (ever so slightly) below the radar: how changes to the apprenticeship system have affected 16-18 year-olds as whole, and what this could mean for 16-18 year-olds living in less well-off places.

But first, as always, the headline figures. The chart below shows that there were 389,000 apprenticeship starts in 2018/19, up by about 13,000 from last year but still considerably below the number of starts in pre-reform years. 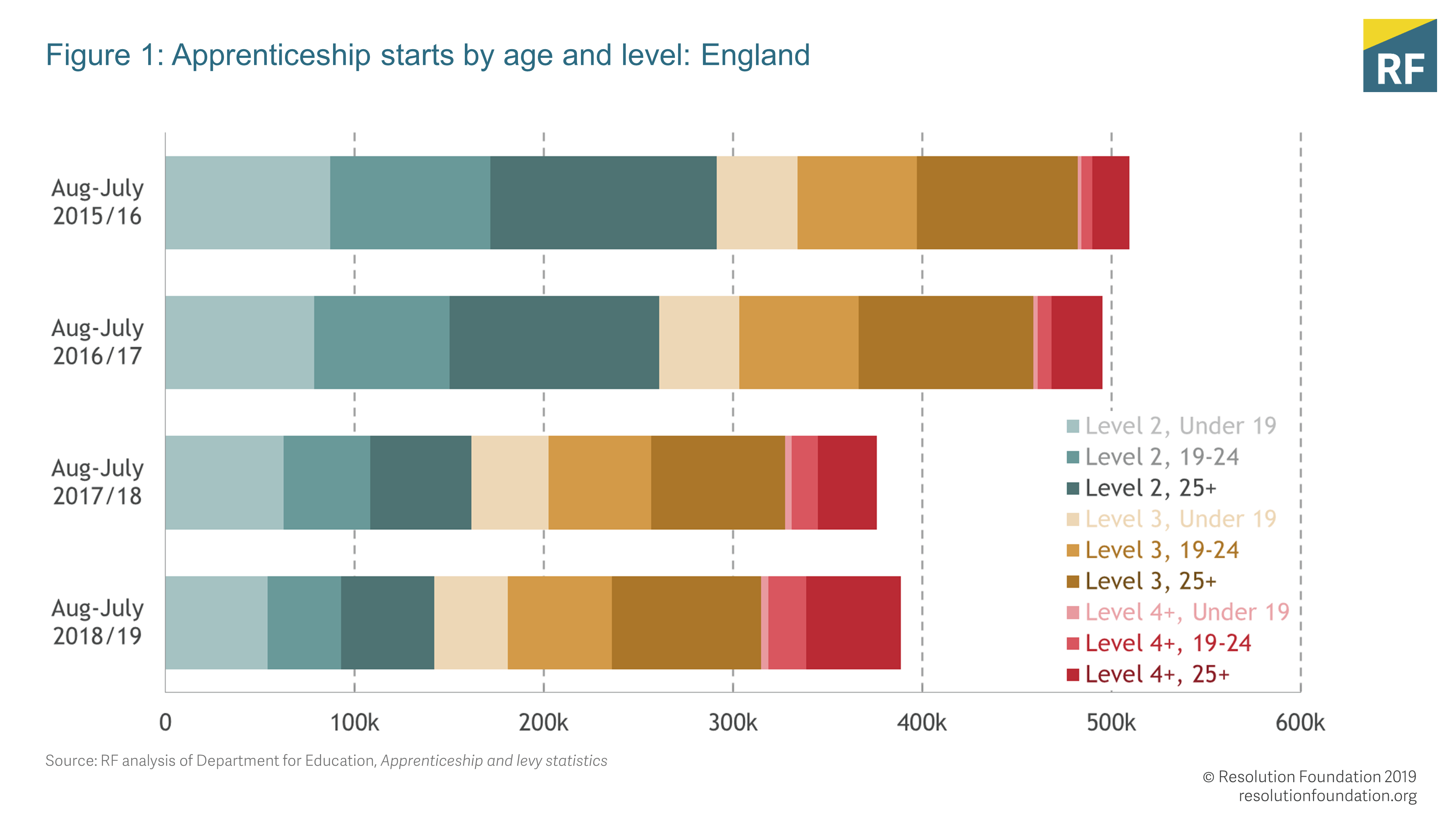 Of course, there’s more change beneath the surface. For instance, the number of apprentices age 25+ starting programmes at Level 2 fell by 59 per cent between 2015/16 (the last full academic year before the reforms came in) and 2018/19. The number of age 25+ apprentices starting programmes at Level 4+ grew by 157 per cent over the same timeframe – albeit from a low base.

Since so many of these striking changes seem to have occurred among apprentices at the upper-end of the age scale (i.e. those 25 and older), there’s been far less focus on those at the bottom-end: apprentices age 16-18. Figure 2 focuses on them: it shows the number of apprenticeships that were started by 16-18 year-olds from 2015/16 to 2018/19. The number of starts going to this group has been falling since even before 2017 (when the introduction of the apprenticeship levy and regulatory reforms came in), worsening each year. 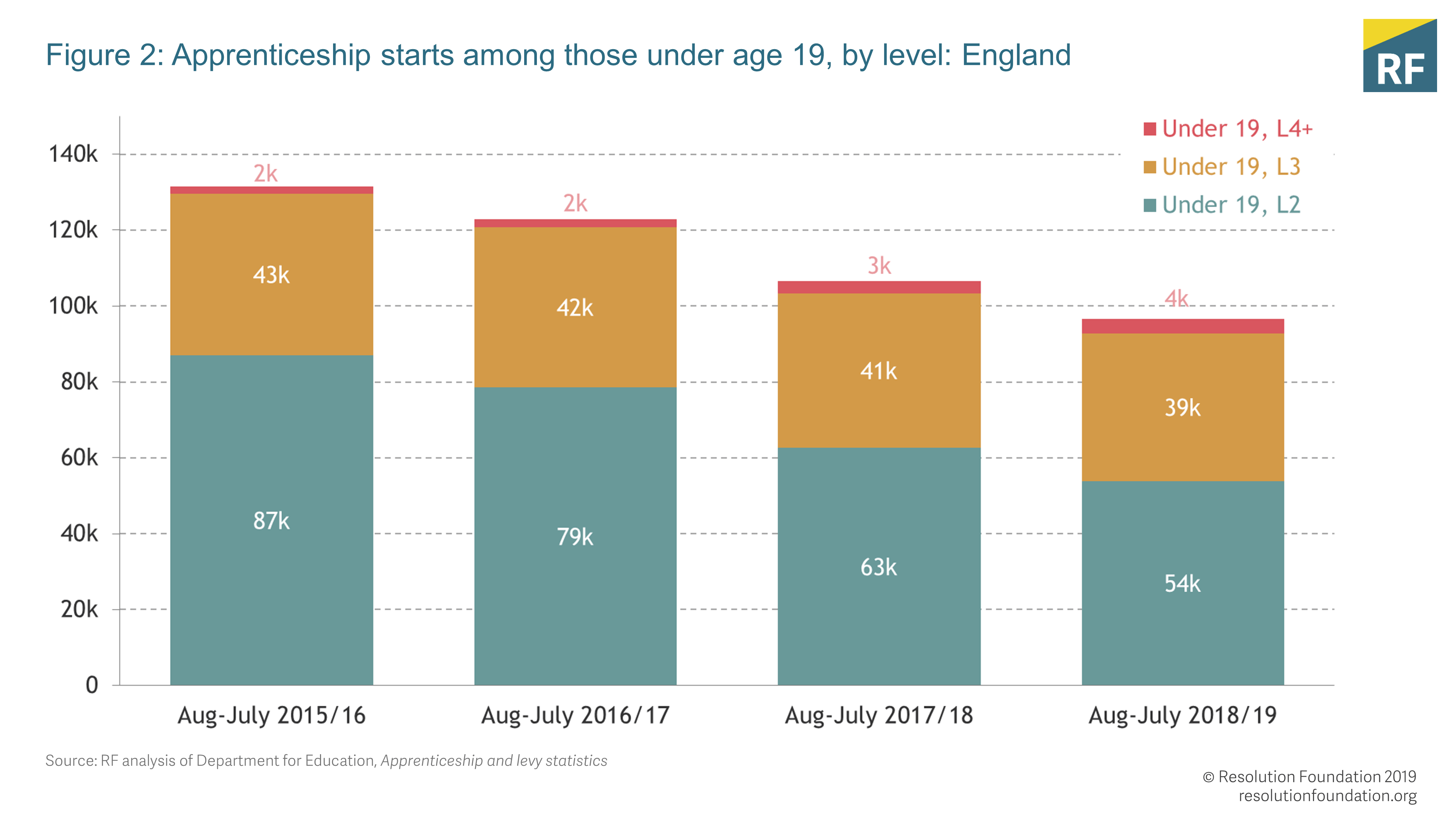 16-18 year-olds, like any age group, aren’t a homogenous bunch – so it’s unlikely that these changes have been distributed evenly. For instance, we at Resolution Foundation are worried that the growing number of higher-level apprenticeships are going, disproportionately, to those from better off backgrounds. Figure 3 sums up the number of 16-18 year-olds who started an apprenticeship in 2015/16 and 2017/18 (the latest available figures) according to both apprenticeship level and whether that apprentice lived in a worse-off (areas classed as having high levels of deprivation) or a better-off (low-levels of deprivation) area. 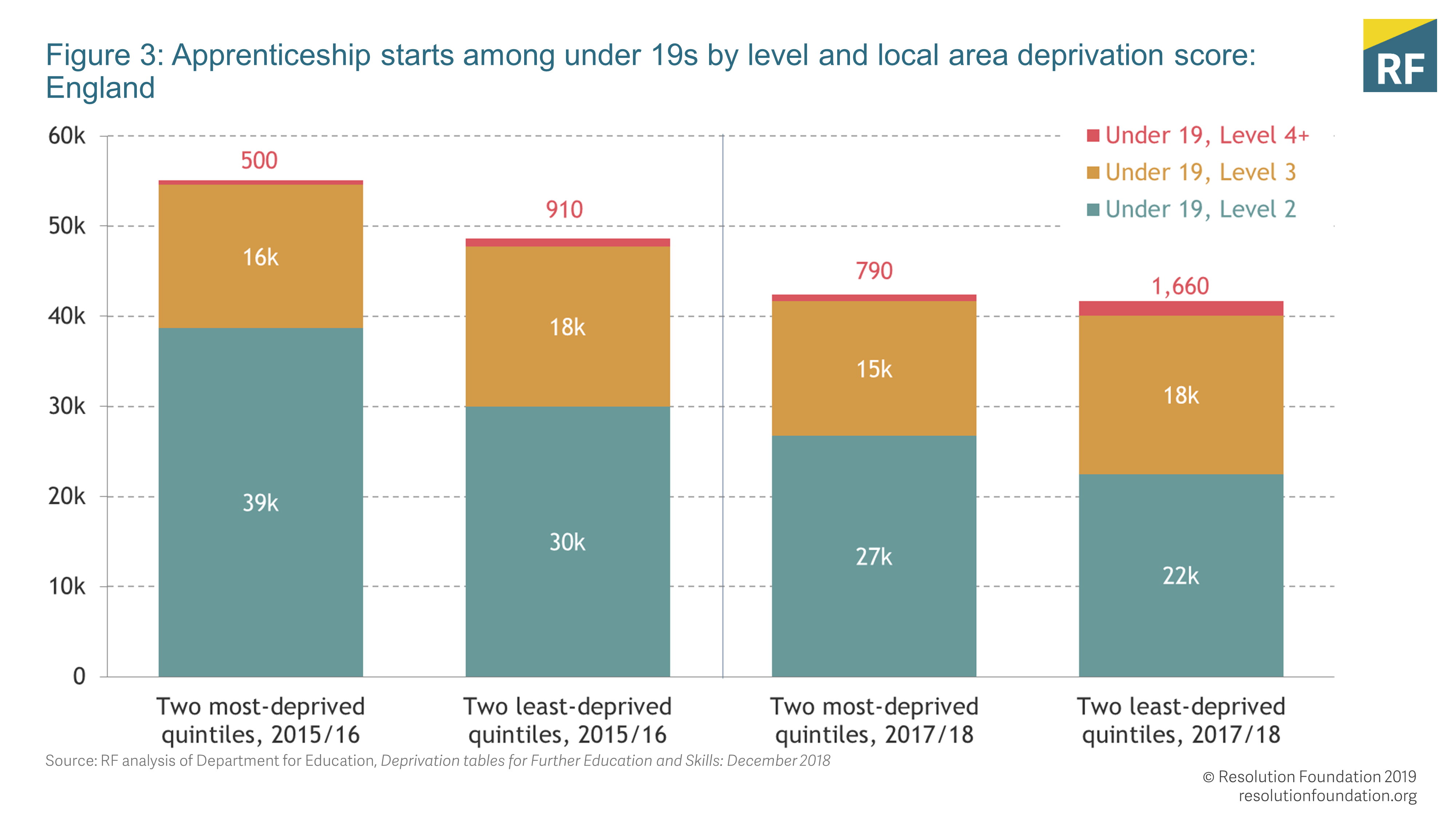 In the past, there were more young people from deprived areas starting apprenticeships (55,100) than there were from better-off areas (48,700). And although the total number of starts going to 16-18 year-olds fell across the board between 2015/16 and 2017/18, that overall fall was particularly acute for those from less-well off areas (23 per cent) than from better-off areas (14 per cent). Perhaps even more worryingly, the changes in apprenticeship level that we outlined above have had different effects on these two groups of young people – as Figure 4 illustrates. 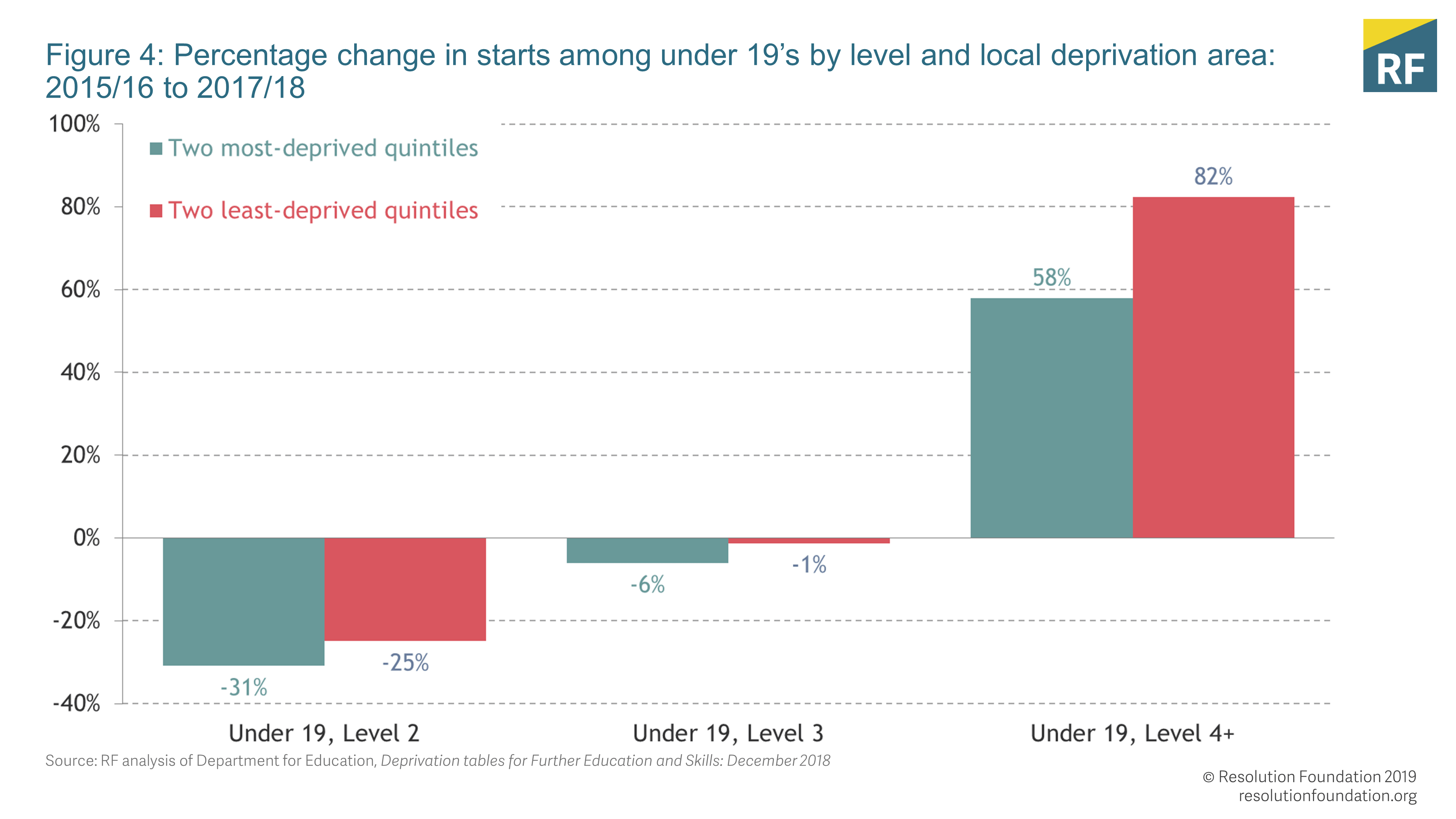 Of course we need to remember that these figures are from 2017/18 – we could see a shift once we get access to numbers for 2018/19, hopefully by the end of the calendar year. All in all, however, these patterns underscore a central message: don’t just focus on the headline numbers as the real story lies beneath the surface. At the Resolution Foundation, we think that the apprenticeships should be designed to offer a clear route to a good career for young people and new starters – that means we need to focus on not just on quantity but also on training quality. So to that end, we’re disappointed to see a continued fall in the number of starts going to young people in 2018/19. In future we hope to see that number rise, and be spread more evenly.

Leaving lockdown
Young people’s employment in 2021: improvements and challenges in the second year of the Covid-19 pandemic
31 January 2022
·
Louise Murphy
Uneven steps
Changes in youth unemployment and study since the onset of Covid-19
14 April 2021
·
Kathleen Henehan
Can training help workers change their stripes?
Retraining and career change in the UK
18 August 2020
·
Kathleen Henehan
Back to top