A lot has been written about the gender pay gap, with the typical hourly pay of women in full-time work 9 per cent below that of men – down from 17 per cent two decades ago. But there is another gap lying behind the gender pay gap that gets far less attention, despite being just as important. That is the gender parenting gap, or corresponding gender work gap. In this blog we put a number on the share of the employment hit borne by mums and dads as a result of looking after children. Does the reality match up to perceptions of rapid cultural change in this area?

Large gender differences clearly remain in overall employment rates. Despite rapid progress in female employment, only around 78 per cent of women age 25-34 are employed, compared to 90 per cent of men. Women are also far less likely to work full-time than men.

Although parenting is not the sole reason for this, it is a huge part of the story. As the chart below shows, among families with a child aged two, 89 per cent of fathers are in full-time work while only 25 per cent of mothers are. 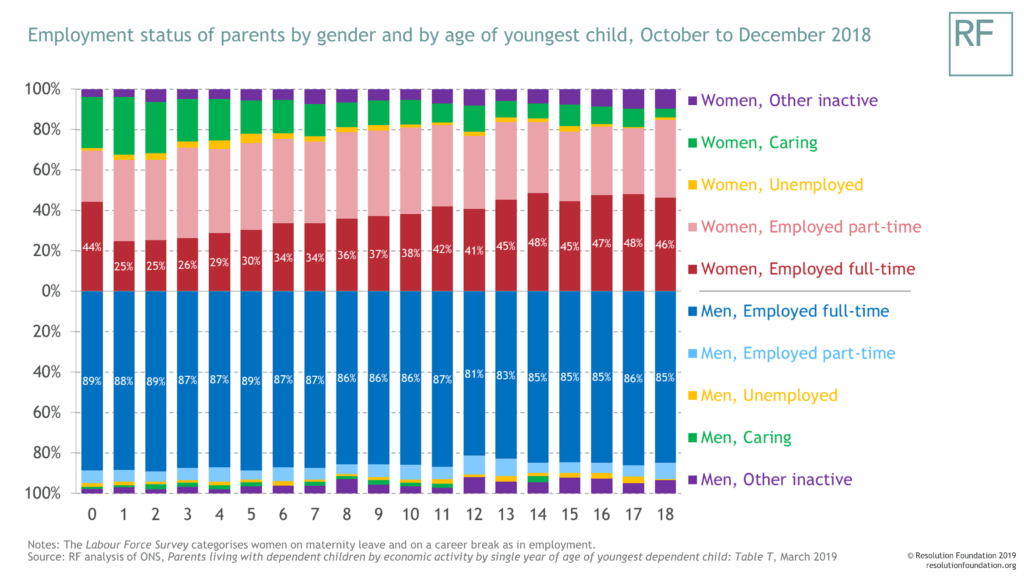 This matters for the gender pay gap – even measured on an hourly rather than weekly basis. As shown below, gender differences in hourly pay are relatively small among younger workers, before childbirth, but part-time work – or time out of the workforce – after having children too often means missing out on wage progression. This results in large gaps opening up between typical male and female workers, with knock-on effects for pensions too. 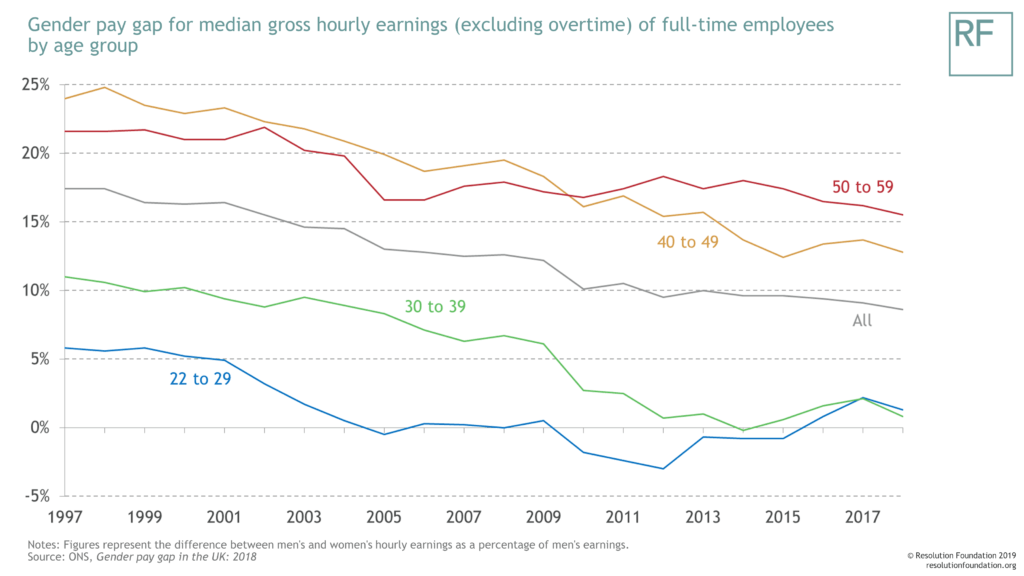 As well as impacting on in-work progression, the imbalance in employment between men and women also more directly means a gender imbalance in financial power and national leadership as more women are missing from the workforce. The world of work misses out on their contributions and experience too. And perceptions of how (relatively) likely men and women of a certain age are to need parental leave, part-time work or to leave the workforce as a result of having children, of course play a role in discrimination by employers.

So the share of parenting done by women and men is something we should all care about. And the graph below gives a new indicator of how this has changed over time. Using the Labour Force Survey, we look at the gender split of parents who are:

Concentrating on families with a child under five, 93 per cent of parents making some kind of employment sacrifice were female in 2018, down from 98 per cent in 1992-93. Conversely, men’s share of this employment hit has risen from around 2 per cent to 7 per cent. The female share is slightly lower (92 per cent) for part-time working, and slightly higher (94 per cent) for being out of the workforce entirely, but both categories display very similar trends. Trends are also very similar for those with older children. These figures account both for divisions within couples as well as the overwhelming gender divide of lone parents. 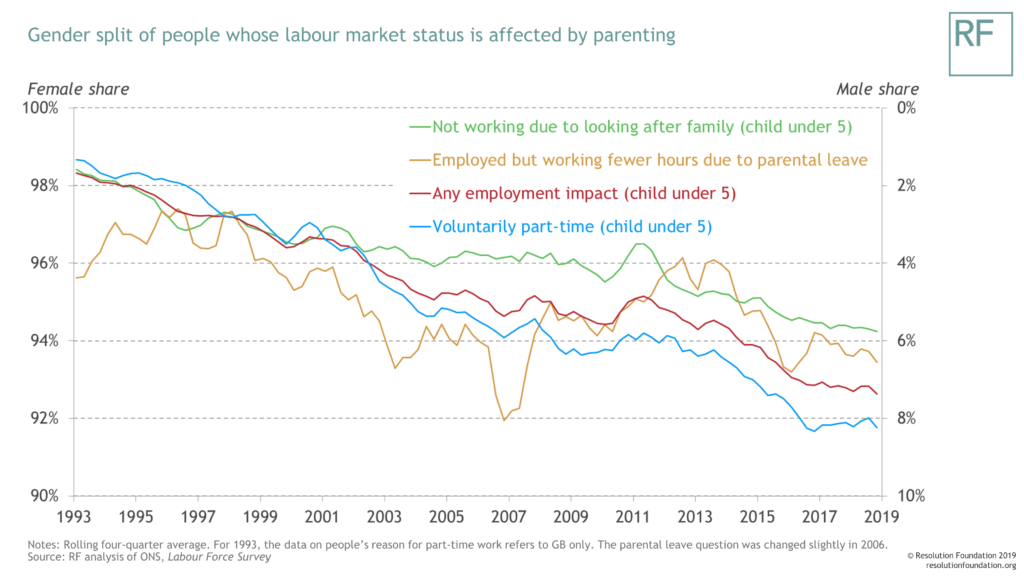 This is a significant social change, with the male share having more than quadrupled. Public policy has played some role in this – including the end of joint taxation for couples in the 1990s, the rapid expansion of state-subsidised childcare, the introduction of (limited) paid paternity leave in 2003, and (limited) shared parental leave from 2015.

However, we shouldn’t get ahead of ourselves on the scale of this change. If the overall trend of the last 26 years were to continue it would take until the 2220s to reach gender parity on this measure.

Views may differ on whether complete balance should be the goal, and on the relative roles of the state, employers and individuals. But there is potentially much more policy could do. To start with, financial disincentives for mothers to work could be reduced by scrapping the marriage tax allowance, introducing a second earner work allowance into Universal Credit, and providing further help with childcare.

But parental leave and pay are likely the most important policies for the gender parenting gap, with couples’ later decisions about the division of parenting and employment strongly affected by their child’s first year or two. When the law offers mothers six weeks of leave at 90 per cent of salary (uncapped), and 33 weeks on a low income, but only offers fathers two weeks (albeit with the option of using some of the mother’s weeks) on that insufficient income, we shouldn’t be surprised that there is a large gender gap in employment and early years parenting.

Given this – and that an overwhelming majority of under 40s support increasing paid paternity leave – perhaps we should look to our Nordic neighbours. In Iceland, mothers get three months of generously-paid leave, fathers get the same (also non-transferable, importantly), and couples get a further three months to share between them. Or Spain, where paid paternity leave is in the process of being increased to 16 weeks to reach gender parity. And we should also look to companies such as Aviva that have introduced the same paid leave policy for fathers as for mothers. Individual attitudes matter too, and social norms are perhaps harder to change than policy, but improving the gender balance of both government and corporate parental policy should be something that both men and women can get behind.

Substantial progress has been made over recent decades on the gender pay gap and female employment. But the indicator above – which we will revisit in future – clearly shows there is a lot more to be done. We shouldn’t have to wait till the 2220s for real gender equality.