While the latest data on apprenticeship starts don’t show much change on previous months – down on recent years, with the number going to older apprentices at higher levels of study is up – the backdrop to apprenticeships has changed.

For a start, we have a new Minister of State for Apprenticeships and Skills, who is in fact a former degree apprentice. Then there’s the matter of the Budget coming up on 11 March, with a host of groups calling for the Chancellor to make changes to the apprenticeship levy, including reforms in aid of small employers.

And finally, it looks as though the growing number of starts at Master’s degree-level has finally garnered some (concerned) ministerial attention. The Education Secretary, Gavin Williamson recently asked the Chief Executive of the Institute for Apprenticeships and Technical Education (IfATE) to launch a formal review into MBA apprenticeships,  stating: “I am committed to maintaining an employer-led system, but I’m not convinced the levy should be used to pay for staff, who are often already highly qualified and highly paid, to receive an MBA.”

So what’s the current state of play for this new stage of the apprenticeships debate? First, as Figure 1 shows, the number of people starting an apprenticeship between August and December 2019 fell to 177,000 – down 12 per cent on the previous academic year. 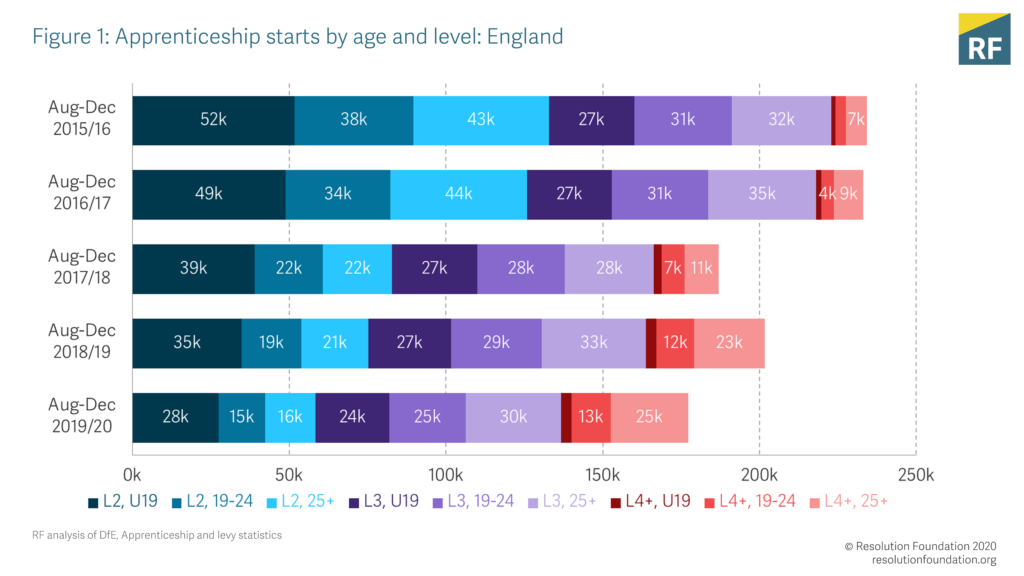 As ever, the big changes remain below the waterline, and here the story is about (once again) about level and age.

Figure 2 shows that, compared to August-December 2015/16 (the year before the levy and other apprenticeship reforms came into play), the number of Level 2 and Level 3 starts for all age groups fell, while the number at Levels 4+ rose, most markedly for apprentices age 25 and older. 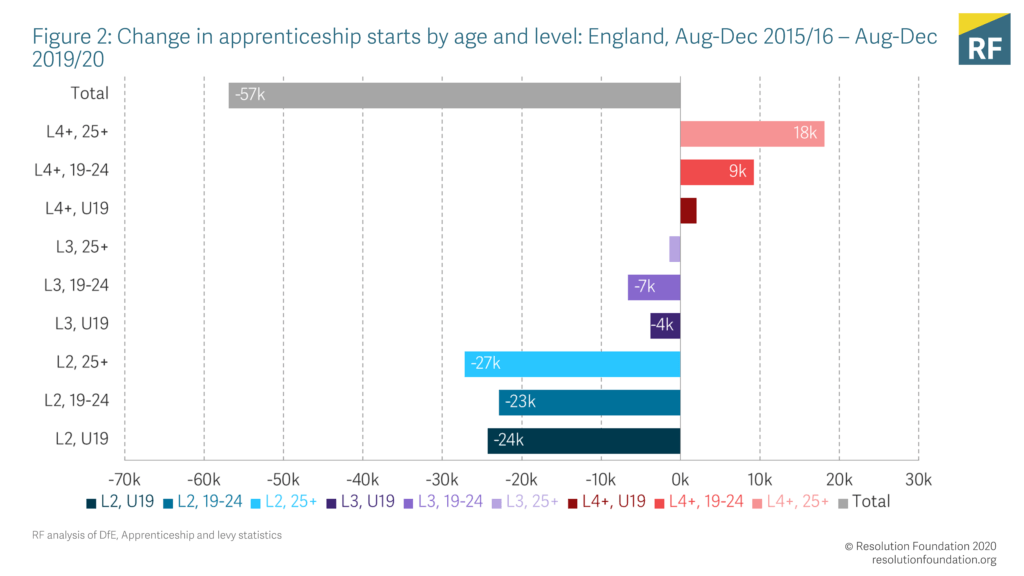 In fact, the fortunes for older apprentices have moved in different directions: fewer opportunities for those taking on a programme at a lower level, but substantially more for those who (we might assume) already have higher-level qualifications to take on a programme at higher education-equivalent levels of study.

So, the big change to the apprenticeship system over the past four years – in addition to it shrinking – is for it to be far more focused on higher-level programmes. The share of older apprentices on higher-level programmes has more than quadrupled over this period – from  3 per cent of all starts in Aug-Dec 2015/16 to 14 per cent in Aug-Dec 2019/20. 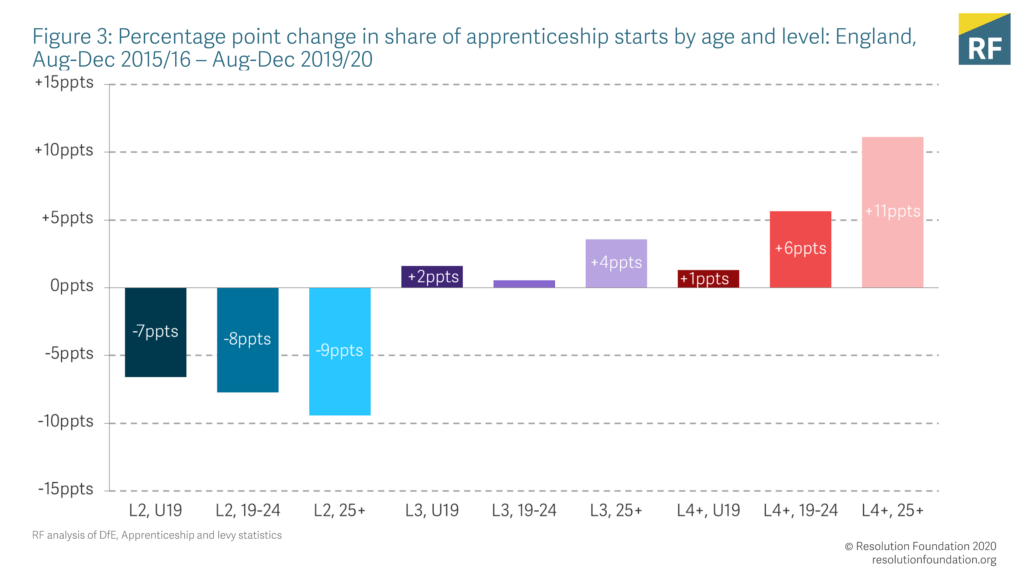 Meanwhile, the number of starts for apprentices age 19 and under, across all levels of study, has continued to fall – as Figure 4 illustrates. 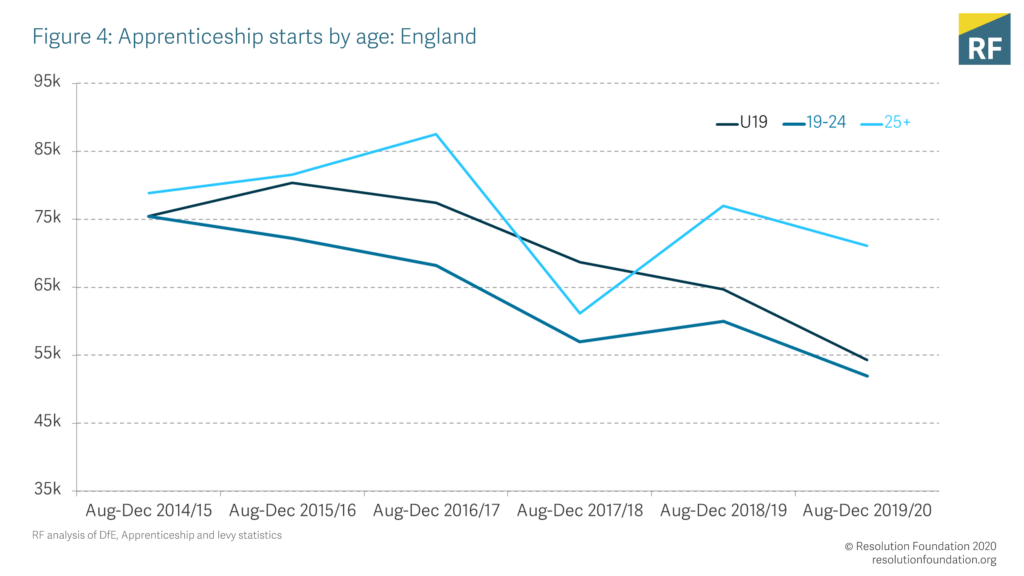 Before the levy came into play from spring 2017, the number of starts going to apprentices age 25 and older was already slightly larger than the number going to either 19-24s, or to under 19s. However, as the chart above shows, that margin has widened substantially in recent years.

What about those MBA-level apprenticeships that the Education Secretary has raised? There were just over 30 Level 7 (Master’s equivalent) apprenticeship starts over the whole of the 2016/17 academic year. Last year (2018/19) there were 11,655. The majority (54 per cent) of these Level 7 starts went to apprentices 25 and older, and more than nine-out-of-10 (91 per cent) were in business, administration and law. Of those business, administration and law starts, nearly 7,000 were focused on accountancy and finance and 3,400 were focused on business management.

While the majority of Level 7 accounting and finance programmes do appear to have been taken up by apprentices age 24 and under, figure 5 shows that the overwhelming majority (99 per cent) of Level 7 business management apprenticeships went to those age 25 and older (see Figure 5). 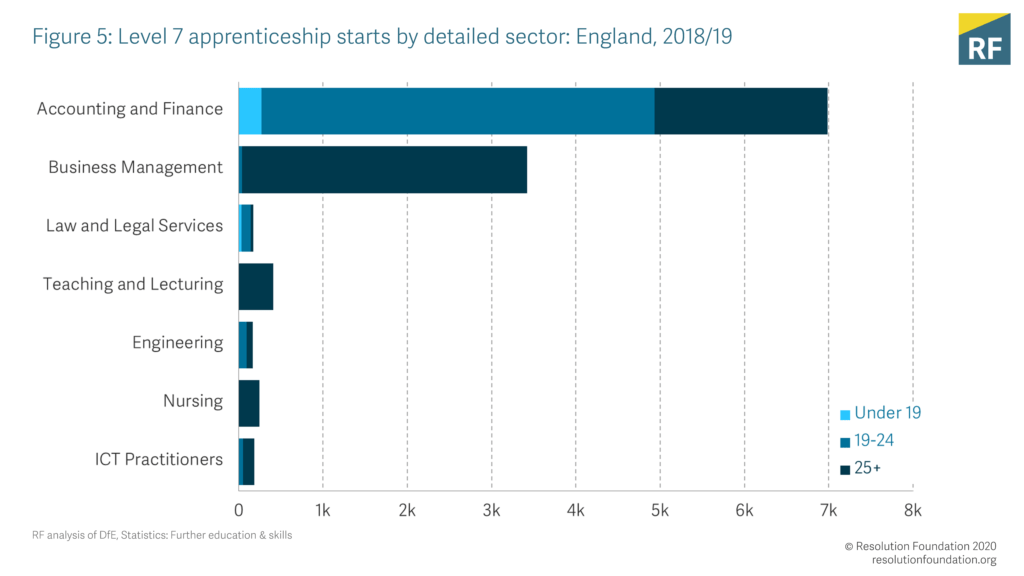 Though this DfE data does not tell us whether these Level 7, 25+ apprentices are new starters to their firm, it’s likely that a majority are not: previous DfE-commissioned apprentice surveys found that 60 per cent of higher-level apprentices were already staff members prior to beginning their programme. This is a very far cry from an apprenticeship system that is focused on giving young people and new starts a route to a good career.

Debates about the costs and benefits of subsidising work-related, and specifically mid-career, training are both welcome and needed. But that is another matter, and one that should take place separately from the apprenticeship programme. The Education Secretary has provided a clue as to his own thoughts on the (MBA) matter, writing “I’d rather see funding helping to kick-start careers or level up skills and opportunities.”

It’s disappointing that the raw data on apprenticeships starts isn’t (yet) changing in a positive direction. But the changing policy context could prove to be very welcome, if it means better focusing Levy funds on the people that need apprenticeships.