Today’s labour market data showed unemployment hitting its lowest rate since 1974. On the face of it, this is cause for celebration. But a shrinking labour force, not a rise in employment, drove the fall in unemployment, and this is a cause for concern. A record number of working-age people are now inactive due to ill health. Meanwhile, pay growth continues to do the splits, falling at near-record rates in real terms, especially in the public sector, but growing fast enough in cash terms to give the Bank of England a headache.

The ‘wrong kind’ of falling unemployment

The latest data show a fall in the unemployment rate – to 3.5 per cent in the three months to August. This is the lowest rate since 1974 and a cause for celebration. 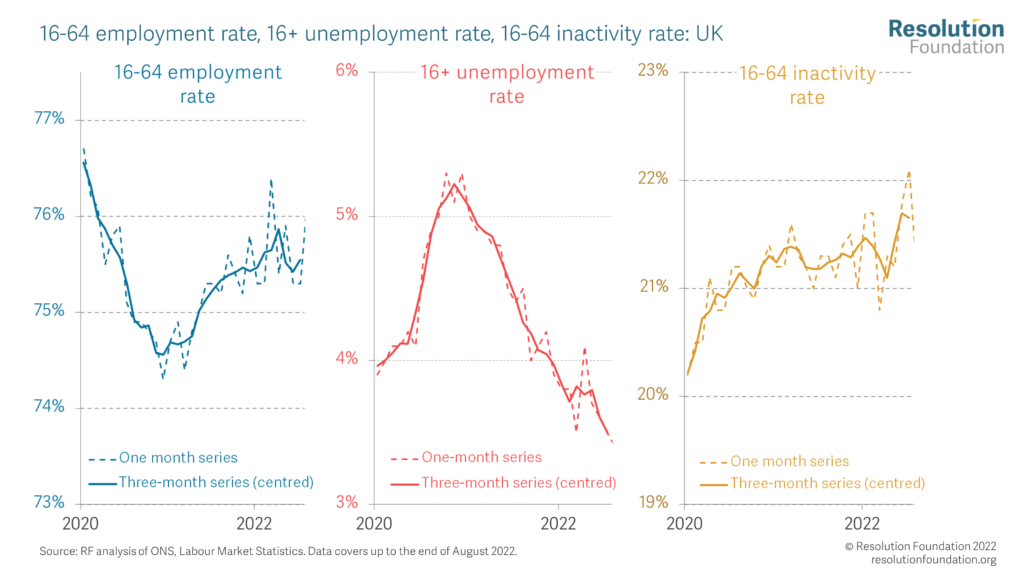 But this is not because of a boom in demand for workers – demand for labour is falling, but supply is falling faster. Both employment and vacancies fell in the latest month of data. Meanwhile, economic inactivity was 21.7 per cent in the three months to August, the same as the previous month, but up on the quarter. This represents a partial reversal of the long boom in labour-force participation over the 2010s, and moves the UK participation rate closer to the middle of the pack among our international peers. 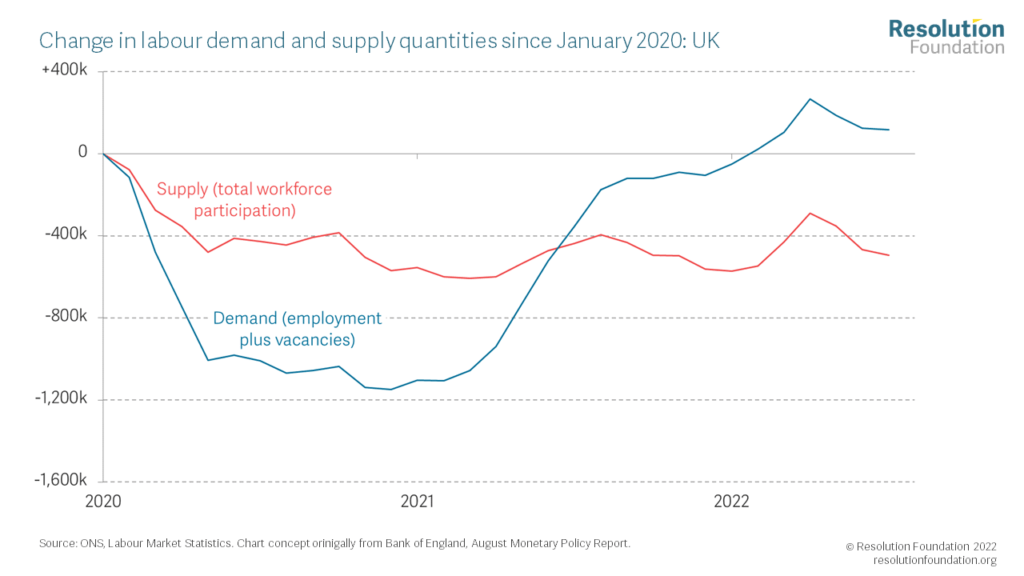 Lower labour-force participation can be a good thing for welfare if it reflects a free choice to prioritise some other things in life – such as study, recreation, family or volunteering. But the lion’s share of the increase in inactivity by the 16-64 population is down to long-term sickness – up by around 400,000 since the pandemic. 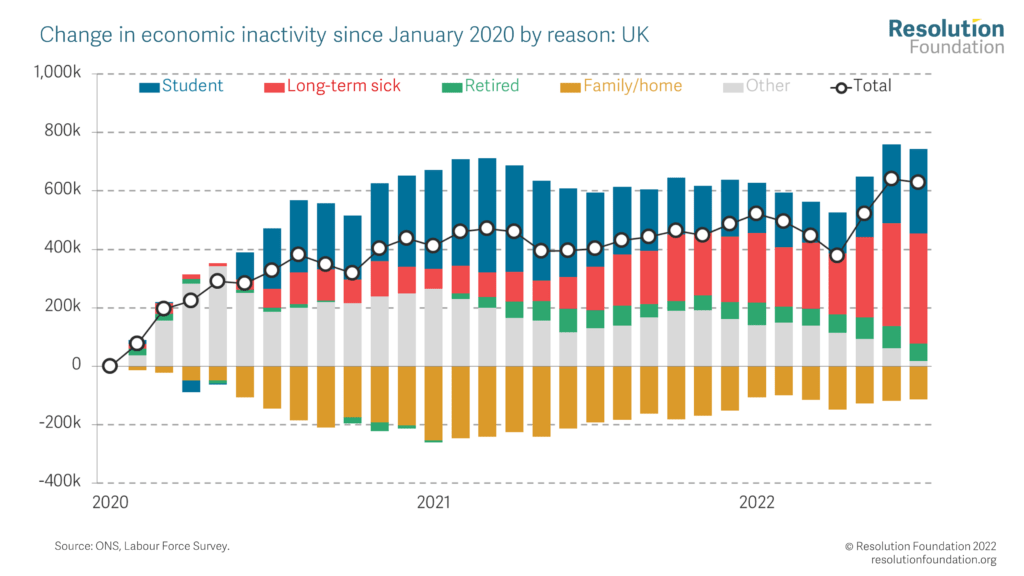 In the six years to 2019, we saw a boom in the number of working-age people with disabilities – up 2.3 million, including a tripling of the number that reported mental health problems. 1.9m of these people found work. Along with the post-pandemic rise in long-term sickness, this underlines the importance of policies to both improve the health of the population, and to facilitate the work of people with health problems.

Pay growth does the splits – twice

Labour supply falling faster than demand means a tight labour market. This is showing up in rapid growth in nominal pay, which is probably also being boosted by high inflation. Nominal regular earnings grew by 5.4 per cent in the year to August, the highest since records began (in 2000) outside the pandemic. Meanwhile, high CPIH inflation (8.6 per cent) pushed annual real earnings down by 2.9 per cent, close to the record low of 3.0 per cent we saw earlier this year. 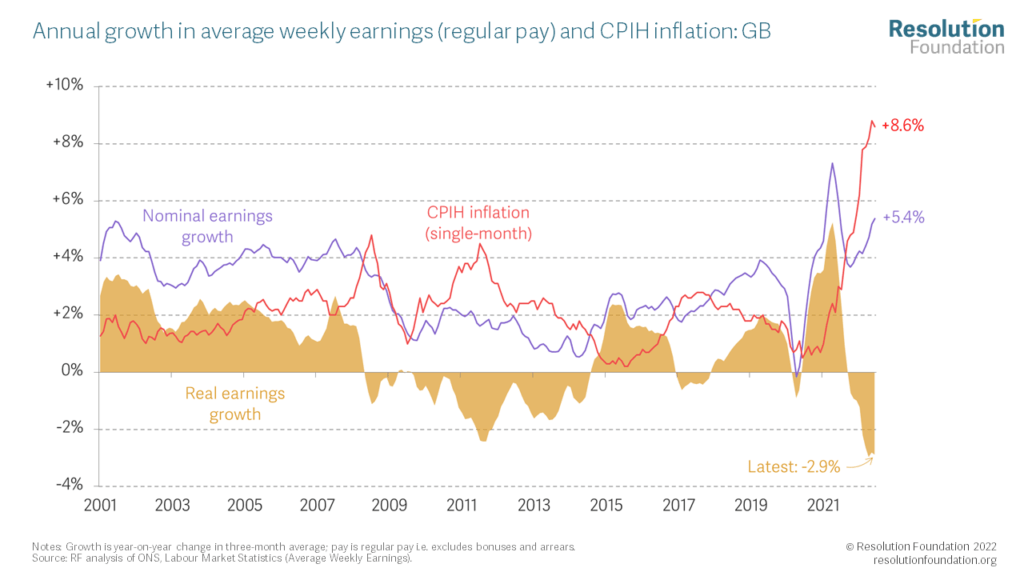 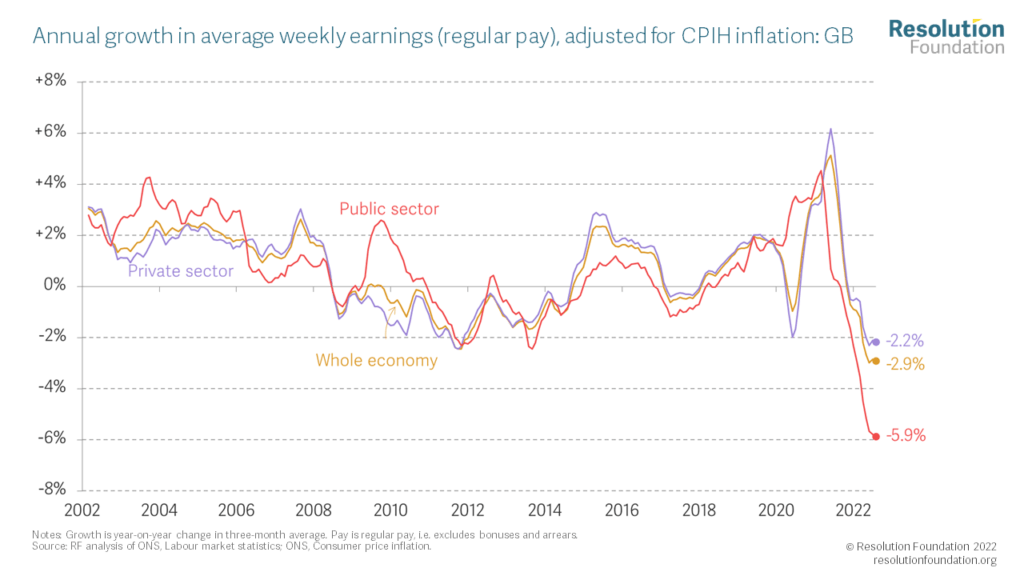 These data point to three nasty policy headaches for the authorities.

First, real public sector pay is dropping like a stone. In the short run, this means that the government can afford to spend less on public services, as it takes time for public sector staff to switch careers. But this can’t last for ever. Pay in the public sector will need to catch up with the private sector, as it generally has over time, so that people will still want to work there. This means higher spending, and hence higher taxes, or fewer employees and public services.

Secondly, nominal pay growth has accelerated to levels that will preoccupy the Bank of England – private sector regular pay growth at its current rate of 6.2 per cent is almost certainly not consistent with 2 per cent CPI inflation in the medium run. Given the lags in monetary policy transmission, the big question is how much the rate hikes we have already seen will cool the labour market and pay growth.

Third, the fall in labour supply may be the biggest shadow the pandemic casts over the medium term. Cutting benefits, as advocated by some in government, might not make a big impact, given that many of the newly non-participating will not be eligible for benefits, while around 40 per cent of Universal Credit claimants are already in work.

Weak labour supply and the prospect of rising unemployment make a resumption of productivity growth all the more urgent. Read our take on what a proper growth strategy for the UK might look like in our report Stagnation Nation.