The last time pay peaked was in August 2007. Average weekly pay was £513, measured in 2019 prices. Over a decade later, pay is finally set to go higher. In August 2019, the latest month for which we have our most timely earnings data, average weekly pay was £511. With real pay growth at a healthy 2 per cent thanks to the tight labour market, projections (illustrated in Figure 4) suggest we are on course to hit a new peak in November or December this year. That is, we might have hit peak pay already. We won’t actually have the data to confirm this until the new year, but it’s a cheering thought nonetheless. 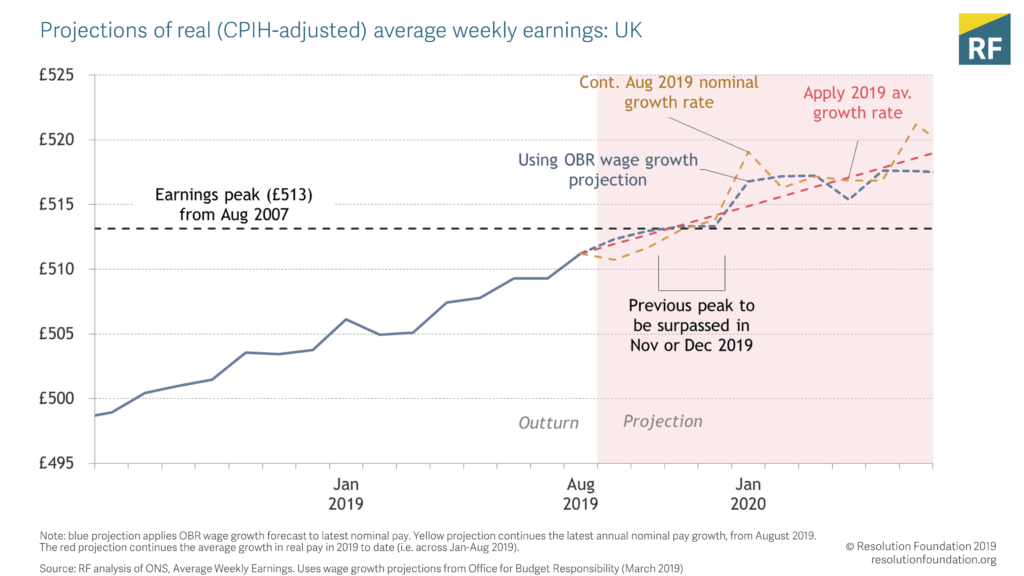 On this narrow measure, Boris Johnson might (just!) be tempted to go into the election repeating Harold MacMillan’s claim that people have “never had it so good”. He would be the first Prime Minister since Tony Blair to be able to do so.

But of course, any crowing would be ill-advised. For one, returning to peak is not the same as making up the lost ground. If real pay growth had continued at 2 per cent since August 2007 average weekly earnings today would be £138 (27 per cent) higher, in 2019 prices. That is a huge gap that we are unlikely to ever make up.

Second, MacMillan said his claim applied across the board, that the listener could “go around the country, go to the industrial towns, go to the farms…” and find unprecedented prosperity. Johnson could not do that today. This is demonstrated by Figure 5, which switches to our slightly-less-timely but much-more-comprehensive earnings data, and shows the real-terms squeeze and the remaining gap to peak across different groups. The first thing to note is that when we switch from weekly pay to hourly, and the mean to the median (which better reflects the typical experience), pay for all employees was still 1.9 per cent away from its peak in April this year. Given real annual growth rates are around 2 per cent, hourly pay for the typical employee is therefore very unlikely to be the best it’s ever been when we head to the polls in five weeks’ time.

In terms of region, median wages in London are already well (4 per cent) above their previous peak, despite having experienced the biggest recession squeeze. Wages are also above peak in Scotland and the South West. Other regions are still experiencing the squeeze. None more so than the South East, where wages in April 2019 were will 4 per cent below their previous peak. 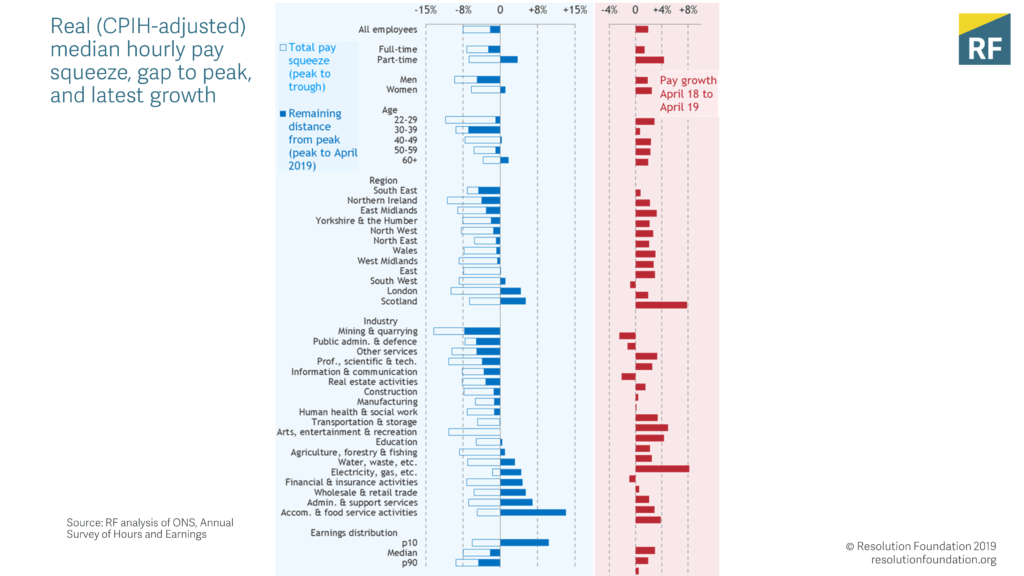 Looking across sectors, it is the lower-paying sectors that have enjoyed the strongest recoveries. Pay in hospitality in April 2019 was 13 per cent above its previous peak. On the other hand, pay in mining, public administration, and personal services, and several other sectors is some way off. This sectoral pattern largely reflects the distributional picture. Earnings for the lowest earners (here represented by the 10th percentile) are 10 per cent higher than their previous peak in real terms, while pay in the middle and upper end of the distribution is still lagging. This, of course, is the impact of the minimum wage, which has protected pay for the lowest earners through a difficult decade. So, have we “never had it so good”? Well, on (one kind of) average, possibly yes. And that is something to celebrate – the pay recovery has been a long time coming. But given the depth of the squeeze, and the many groups still waiting for their recovery, the focus now should be on keeping current healthy pay growth going into 2020 and beyond so that all groups can enjoy a proper pay recovery.