A cost of living catastrophe is what British families are facing in early 2022. The government has been understandably focused on Omicron but has woken up to this crisis, and is now discussing policy action to address it. But there is no magic bullet. What’s worse, this comes on the back of a decade of stagnant living standards.

The big-picture driver of the cost of living crunch is rapidly rising inflation, which is already at 5.1 per cent and forecast to hit a 30-year high of more than 6% this spring. Fast price rises mean pay packets were already shrinking in real terms late last year – for the third time in a decade. Prior to the financial crisis, real wages basically never fell. The fact that it’s now become almost normal says a lot about the weak growth of our economy, and explains why Britain has spent the past 10 years or more in an unprecedented living-standards disaster.

But there are specific features that will turn our current cost-of-living crunch into a cost of living catastrophe this April – rising taxes and soaring energy bills. Both are painful, but taxes at least have the merit of being borne by those with the broadest shoulders, while the £12.5bn of extra revenue from higher national insurance contributions is badly needed by the NHS.

There are no merits to soaring energy bills, unless you’re reading this in Moscow. Rising gas prices mean that typical energy bills could increase by £700 or more when the energy price cap is lifted in April. And unlike tax rises, this squeeze will be felt most keenly by low-income families. If typical energy bills reach £2,000 a year, that would mean – according to the Resolution Foundation’s latest analysis – the poorest third of households spending at least 10 per cent of family budgets on energy bills alone. This is comparable to what richer households spend on the likes of restaurants, hotels and holidays. 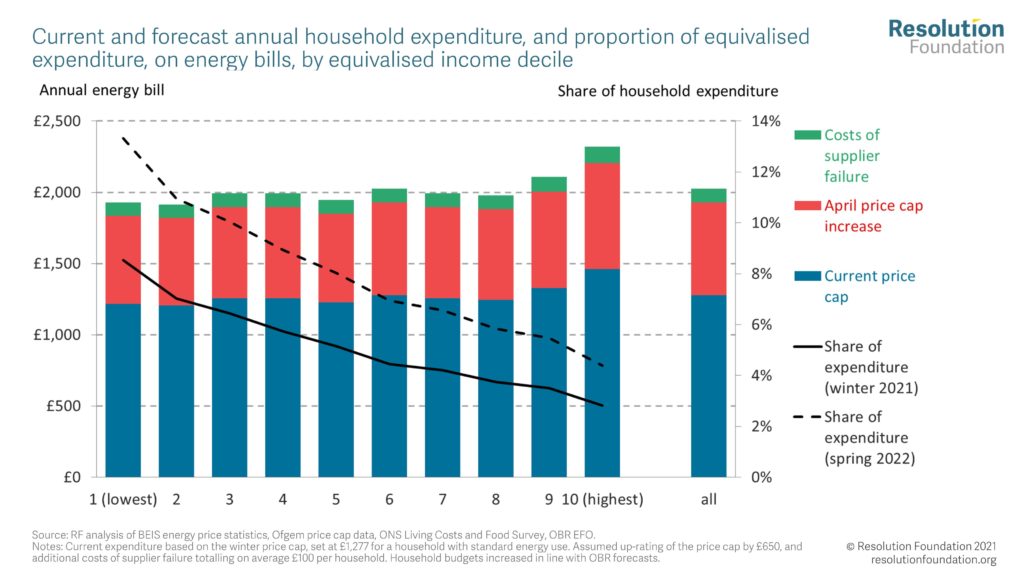 The scale of this catastrophe is so huge, and so difficult for low-income families to cope with, the government will have to step in. Doing so isn’t easy. An unlikely coalition of Labour and Brexiteer Tory MPs want to cut VAT on energy bills. This would make some difference, cutting individual bills by about £100, at a collective cost of £2bn. But on its own that’s tiny compared with the average estimated bill surge of £750, and doesn’t target support at those needing it most. The top priority is support for lower-income families, unable to simply cut nonessential spending, or draw down on savings as energy bills rise.

This support could be most simply given via the benefits system. But the government is reluctant to consider this option, having recently removed the £20 uplift to universal credit. The good news is that there is potentially another ready-made route to provide support: the warm homes discount (WHD). The bad news is that it’s an absolute stinker of a policy design-wise that will require major surgery to make it fit for purpose.

The first step to improving it would be to increase eligibility from poorer pensioners and some low-income working families to all poorer households. The payment will also need to be automatic to ensure the help gets through. Second, the normal payment of £140 might be enough for a normal winter, but won’t wash when bills surge by 50 per cent. Third, WHD currently funds help for some people by increasing everyone else’s energy bills. But for obvious reasons higher bills aren’t exactly what we need today – so the taxpayer would have to pick up the tab. Collectively paying higher taxes tomorrow for lower bills today is the right answer to such a big price spike for an essential good.

How much might all this cost? A £300 one-off payment to all 8.5 million low-income households would cost up to £2.5bn. A large amount, but the minimum we’re going to need to mitigate rising energy bills. And once we’re through this crisis we mustn’t forget the bigger picture – the need to tackle our failing energy sector, poorly insulated housing and reliance on fossil fuels. The surge in Omicron cases means the equally staggering rise in energy prices has taken a while to get debated in Westminster. We’ve now got a matter of weeks to turn that talking into something more useful for households seeing their budgets squeezed: action.

This article was first published in The Guardian