It’s that time of the year when everyone does their reviews of 2018. The political review of the year will inevitably be dominated by the thrills and spills of Brexit. But for those interested in public policy, a strong contender for the Resolution Foundation’s ‘policy that could make a big difference to people’s living standards’ award is the requirement for companies to publish their gender pay gaps, which came into effect in early April.

This requirement for transparency has led to some major embarrassments for UK companies. The bank JP Morgan, for instance, reported a 54 per cent median pay gap. But it also sparked a wider push, both within firms and across business, to identify the causes of – and possible solutions to – Britain’s ongoing gender pay gaps. Actions taken to address these gaps could bring real living standards gains to those on the wrong side of them.

But if 2018 was a totemic one for the gender pay gap, might 2019 be the year when we pay more attention to the pay penalties faced by black and ethnic minority workers of both genders? From a living standards perspective, identifying and taking action to close the BAME pay gap could bring similarly large benefits to millions of workers.

The first step towards tackling the issue however, is to understand the scale of the problem. Earlier this year, the Resolution Foundation published a report showing that despite gains in relation to education and employment over recent decades, substantial pay gaps between ethnic minority groups and white men and women persist. Other organisations have also highlighted ethnicity-related inequalities and called for greater action. The Equality and Human Rights Commission found that only 3 per cent of employers measure their disability and ethnicity pay gaps. They called on the government to “introduce mandatory monitoring and reporting on the recruitment, retention and progression of disabled people and ethnic minority groups for employers with over 250 staff by April 2020.” In parliament, the Women and Equalities Committee recently (and unsuccessfully) called for a cross-government race equality strategy.

Getting a handle on the size, causes of, and responses to ethnicity pay inequalities is of critical importance. A proportion of the hourly ‘pay gaps’ experienced in recent years can be explained by differences in personal and work-related characteristics that exist between groups, such as region, education to occupation, industry and contract type. However, the report found that even after such factors are taken into account, large ‘pay penalties’ persist. For instance, the 31 per cent pay gap experienced by non-graduate Pakistani and Bangladeshi men halved to a pay penalty of 14 per cent, (-£1.91 per hour) once background factors were accounted for.1 That’s still a huge pay penalty. It was bigger still for black graduate men, who faced the biggest pay penalty of 17 per cent (-£3.90) after adjustments.

We cannot be certain about what factors underlie these remaining differences – attributes not captured by the data may play a role – but the strong suggestion is that discrimination matters too. Figures 1 and 2 set out the raw pay gaps and adjusted penalties for men and women, respectively. 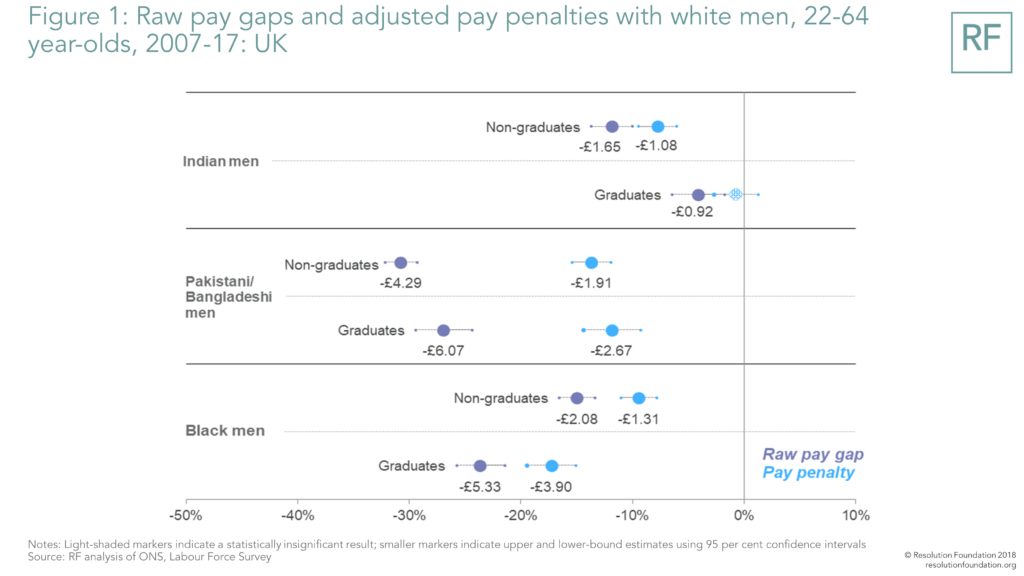 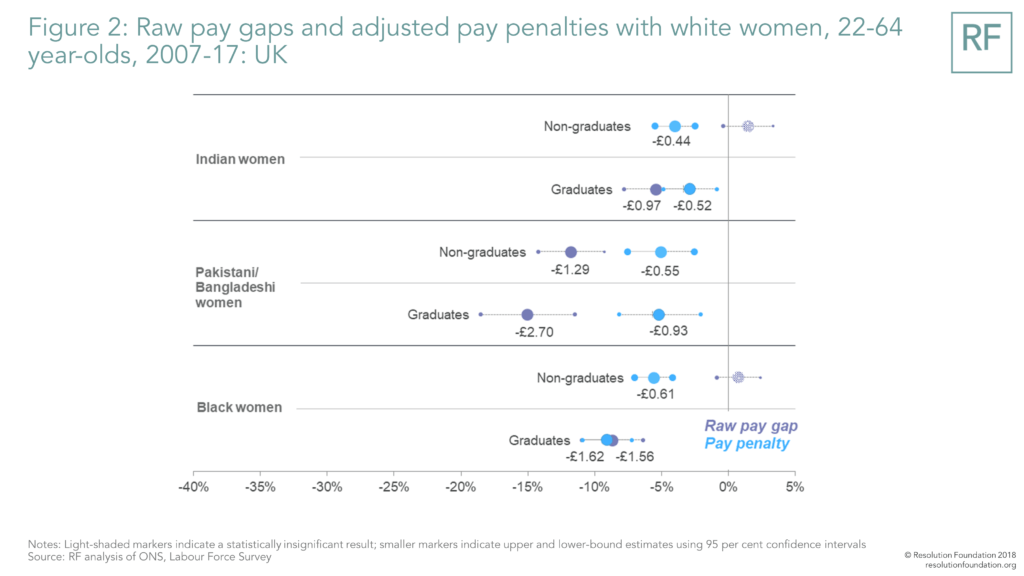 Both pay gaps (which refer to the average difference in pay that exists between groups) and pay penalties (the average difference in pay that persists after personal and work-related characteristics are accounted for) represent a significant living standards issue for individuals from ethnic minority backgrounds. For example, the £3.90 hourly penalty felt by black graduate men between 2007 and 2017 would, if we assumed that a person worked full-time, have amounted to over £7,000 a year,2 which itself has staggering implications for an individual’s lifetime earnings.

We can get a sense of the total annual ‘cost’ of ethnicity pay inequalities by multiplying each group’s average hourly pay penalty by their annual number of hours worked.3

We find that between 2007 and 2017 the total annual cost of pay penalties experienced by black, Indian and Pakistani/Bangladeshi men and women would amount to £3.2 billion per year (our estimates show the range to be between £2.5 and £3.9 billion). That’s a staggering amount of lost pay across the economy to account for unexplained pay penalties facing Britain’s 1.9 million Black, Indian and Pakistani/Bangladeshi employees. Of course, these figures are illustrative, but they represent a very real pattern: despite substantial progress on educational attainment and employment rates, ethnic minority men and women of similar ages and education levels who were in similar jobs, industries and regions are paid billions of pounds less each year than their white counterparts.

The extent to which the raw pay gaps become reduced once personal and work-related factors are accounted for does support the notion that universal measures like education, careers advice and access to high-skilled work can reduce unequal labour market outcomes. However, the fact that such large penalties exist at all suggests there is real scope BAME pay to rise without having pushing down employment. The size of the penalties is also immensely worrying: it indicates that along with developing policies that help boost men and women from ethnic minority backgrounds ‘up’ the pay ladder, we also need a better understanding of – and response to – discrimination and disadvantage that could bring them ‘down.’

One of the unfortunate casualties from recent weeks in Westminster has been the chances of further progress on  Theresa May’s ‘Burning Injustices’ agenda – though there’s no reason why she or her successor won’t opt for a similar post-Brexit domestic reform programme.

But progress on tackling pay injustices has already started. Encouragingly, the government is looking to build on the success of the gender pay gap reporting requirements, and recently published a consultation document asking whether there should be similar pay gap reporting by ethnicity. And stark findings from the small proportion of companies who have already voluntarily released their ethnic pay gaps – the production company ITN, for example, reported that their BAME employees are paid 21 per cent less per hour – have highlighted the need for greater transparency in this area.

The consultation closes early in the New Year. We’ll be monitoring its progress in the hope that 2019 will see this issue pushed further into the open.

[1] Results are calculated using estimated coefficients from an ordinary least squares regression of the natural logarithm of pay (CPIH-adjusted to 2017 prices) on an ethnicity and sex indicator. Control variables include: age, region (a 12-category variable), qualifications (a seven-category variable), degree class, whether a person was born in the UK, full-time/part-time work, years of experience in the labour market, occupation (Standard Occupational Classification one-digit), industry (Standard Industrial Classification two-digit), public/private sector, permanent or non-permanent contract. Qualifications are interacted with age, age squared and region.

[3] The annual sum of pay penalties are estimated by multiplying each group’s average hourly pay penalty by the average annual number of hours worked by employees within each group over the 2007-17 period.