Hope you had a great Christmas and happy (slightly premature) New Year. If Omicron has put paid to your plans for tonight, comfort yourself in the knowledge that, according to highly detailed research (my own of living through them), New Year’s Eve is the most overrated/overpriced night of the year. And the pennies saved will come in handy, given 2022 is set to the ‘Year of the Squeeze’ as our TOTC New Year outlook explains.

It’s not the most uplifting read, but our understandable Omicron-focused sights do need lifting to the challenges that lie not that far ahead. New Year’s resolution? Doing something about them.

Omicron means 2022 has a difficult start in store for us, causing huge disruption for firms and public services as customers and workers alike dry up. This wave’s silver lining is that the wave should be short lived. But not every challenge that 2022 brings will ease as promptly.

Rising inflation has focused minds on the cost of living squeeze this winter. These pressures are likely to build in the new year with further price rises outstripping pay growth. The spring looks particularly difficult, with April bringing a cost of living catastrophe affecting the vast majority of households: soaring energy bills and significant tax rises will see an annual income hit to the typical household of over £1,000.

So large, widespread, and government-policy-related is this pain that it’s almost impossible that it will go ahead without some form of mitigation.

Avoiding a big rise in unemployment has rightly, and successfully, been the labour market priority during the Covid-19 crisis. But as the economy rapidly reopened through 2021 and unemployment returned to near pre-pandemic levels, the focus has shifted to earnings. Just a few months ago, high headline pay growth led some to worry about wages growing dangerously quickly. Talk of a wage surge was all the rage, despite high growth figures reflecting base effects and the temporary impact of reopening the economy, rather than a new dawn for worker power.

The latest labour market data suggests the real problem facing the labour market is very different: stagnant wages. In October, earnings growth fell to 3.8 per cent, just as CPIH inflation rose to the same level, meaning that real wages were flat over the previous year. Pay growth over the last few months has been even weaker, and with the cost of living continuing to rise, it looks almost certain that real earnings will have fallen in the year to November.

2021 will end with real wages falling, but what does 2022 have in store? The medium-term outlook for wages is uncertain but far from rosy. The Bank of England now expects growth in the Consumer Prices Index (CPI) to reach 6 per cent in the spring. Combined with the most recent Office for Budget Responsibility earnings forecasts, this suggests that real earnings will be falling in the first half of next year, before returning to some slow growth if inflation falls back, as the chart below shows. The result is that we’re set to be going into next Christmas with real earnings basically no higher than during this festive season, with growth of just 0.1 per cent in the year to Q4 2022. 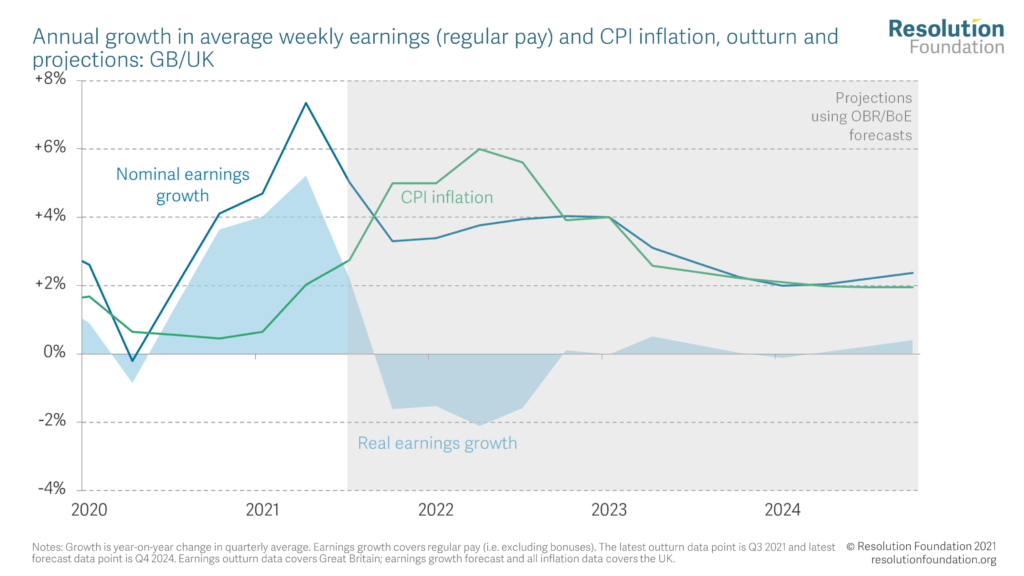 For all the talk of the pandemic (somehow) boosting worker power, it looks more likely to deliver the third real wage squeeze in a decade, and to leave workers substantially worse off than they would have been otherwise. By the end of 2024, average earnings are set to be £740 a year lower than they would have been if even the sluggish wage growth prior to the pandemic had continued.

Our lowest earners will be protected by April’s welcome 6.6 per cent uprating of the National Living Wage (which will now apply to those aged 23 and over). But wider changes that month risk a cost of living catastrophe, as energy prices and taxes rise.

A key driver of the high inflation predicted by the Bank of England during 2022 is energy prices. Wholesale spot gas and electricity prices have increased more than eight-fold and five-fold respectively over the past 12 months.

The main effect to date has been the failure of 28 energy suppliers, but households are next in line, as the higher wholesale prices will feed through into a very large rise in the energy price cap in April: estimates are that this will amount to a rise of around £500 or more for a typical household bill, on top of October’s £139 increase. Households will also face an additional charge of around £100 as the costs associated with those firm failures are recouped.

As the chart below shows, £600 is a huge increase for households of all incomes. The poorest households will see their energy spend rise from 8.5 to 12 per cent of their total household budget – three times the proportion for the richest. Many of those coming off fixed tariffs onto a price cap tariff will even bigger rises. 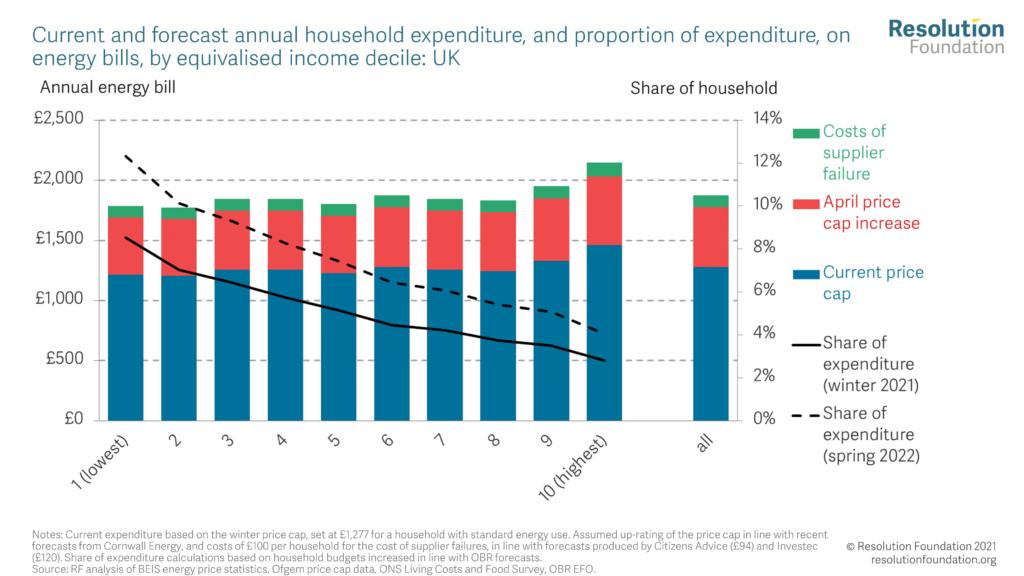 The April cap increase will also affect far more households than past changes, thanks to the near-absence of fixed tariffs for the second half of 2021, and the fact that many customers moving from failed suppliers are moved from fixed price onto standard tariffs (85 per cent of Avro Energy’s 580,000 customers were on fixed deals, for example). Proceeding with such a large, overnight bill rise without mitigating measures at a time when real wages are falling looks completely untenable.

If that wasn’t enough, April will also see significant tax rises including the usual Council Tax rise and an increase in dividend tax. Most significantly, National Insurance (NI) rates will rise by 1.25 percentage points (as a precursor to the proper Health and Social Care Levy which will exist from 2023). April also marks the start of a four-year Income Tax threshold freeze, meaning a further tax rise – albeit one that does not result in a month-to-month loss of cash.

The scale of the NI and Income Tax changes are significant, though the former is more important, as the chart below shows. Across all households, the average combined impact on household incomes is £600, or 1.4 per cent of disposable income. But – unlike the impact of rising energy prices – these losses are tilted towards higher-income households. For example, the NI rate rise (excluding the impact of the threshold rise) will lower the average income of households in the bottom half of the distribution by around £140 (0.6 per cent), but those in the top half will lose £730 (1.2 per cent). 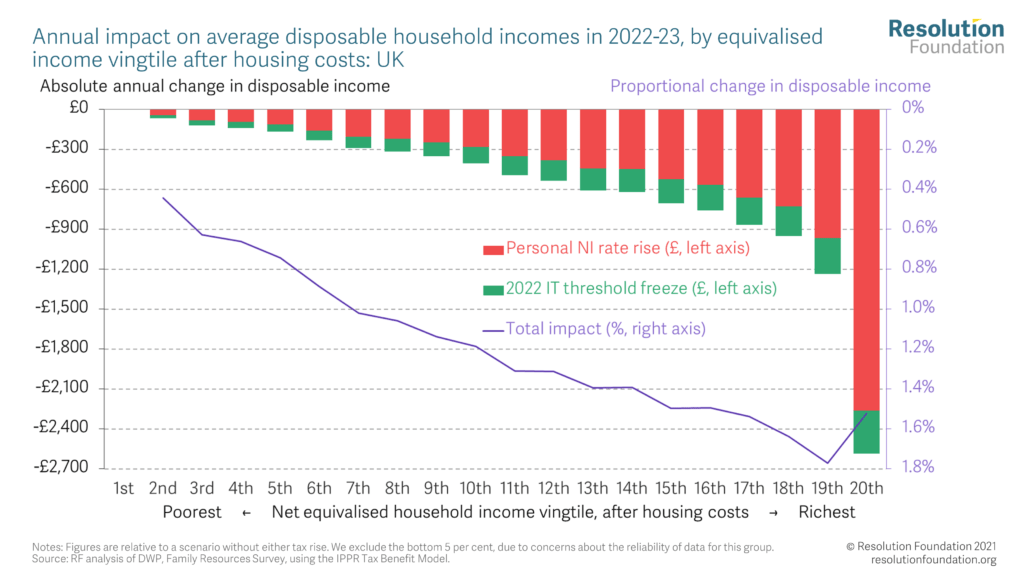 There is a broad consensus that taxes will generally be rising in the years ahead, given the long-term impact of the pandemic as well as pre-existing, structural fiscal pressures. But it is fair to assume that the Treasury did not envisage these tax rises taking place at exactly the same time as a new coronavirus wave, falling real wages and huge energy price rises.

Real wages are already falling, and look likely to continue doing so through much of 2022. Against that backdrop, the Government’s current intention is for taxes and energy bills combined to rise overnight by an average of £1,200 a year per household in April. The scale of the living standards catastrophe this will cause means it’s hard to believe that steps to mitigate it won’t be taken.

It is possible that the combination of Conservative MPs opposed to any tax rises, and a Labour Party that thinks NI rises are unfair, could together cause the NI rise to be delayed. But top of the Government’s New Year resolutions should be addressing the increase in the energy price cap.

Of course, the longer-term ways to insulate ourselves better from volatile commodity markets are to accelerate the rollout of renewable energy, crack on with long-overdue reform of the power system architecture to accommodate more variable generation sources at low cost, and to insulate the nation’s homes. But households feeling the squeeze today will be looking for more immediate action.

The Government does not have straightforward policy options to mitigate this huge price rise, the causes of which largely lie outside its control. But it can provide some relief via the tax or benefit system or, more directly, limit the increase in bills on a temporary basis.

The ideal policy would be direct support for lower income households. But given that would involve increasing the basic rate of Universal Credit soon after the £20/week uplift has been scrapped, this is unlikely to happen. The Government could also fund an increase in, and wider eligibility of, the Warm Homes Discount Scheme that reduces bills for vulnerable customers.

Policy options that more directly focus on reducing bills include:

None of these is a pain-free solution, but then the months ahead will not be easy for households who see their wages fall back as energy bills and taxes rise. As Omicron hopefully fades in the early months of 2022 we will come to realise the scale of the challenge posed to household finances. At that point, Government is likely to realise it has little choice but to act.