Nothing Lasts Forever these days. In the end the whale spits you out, or the Ecuadorians kick you out. That might be good news for Brexit-fatigued Brits. But then again Assange was stashed in the embassy for seven years, so maybe we’re not even half way there….

Because holidays are calling, and it’s important for art to imitate life, we’re getting into the spirit of Brexit by putting Top of the Charts on hold next week. The good news however is that we will be bringing it back to the people your inbox on Friday 26 April.

It’s important you use this time wisely to avoid letting down our school teachers Donald Tusk. By reading this week’s selections very carefully. Or submitting an essay for the Royal Economics Society/FT’s ‘Young Economist of the Year 2019 competition’. Or just having a snooze.

Either way, have a great break.

Geographic divides. Notions of economic and geographical divides are increasingly intertwined, with UK debates on so-called ‘left behind towns’ and the French gilets jaunes described as the revolt of ‘peripheral France’. New research (open access summary) adds colour (quite literally in map form) to this issue by asking what has caused these geographical divides between rich and poor places to grow. The popular explanation is that the rich and highly educated have sorted themselves into the most successful places – think New York and San Francisco. But this research shows that national increases in income inequality between people are actually much more important – not rich people moving, but rich people who already live in rich places getting much richer. The implication? Place-based policies are crucial, but if you care about income divergence between places then national economic policy changes – like the national minimum wage – are really important too. When it comes to spatial inequality the nation is local.

Demographic divides. Everyone has got used to a big gap in election turnout for different generations – something we highlighted in the Intergenerational Commission. But the divide in who different age groups vote for is a more defining feature of modern politics – the old are increasingly true blue, while the young are singing Oh, Jeremy Corbyn. A new Tory think tank report does a good job of investigating the scale of the challenge facing the party to attract younger voters – and had the backing of 42 Conservative MPs and seven out of the potential 1,000,000 leadership contenders. The good news for Tories in the report is that while only 16 per cent of under-35s would vote Conservative today, 28 per cent – roughly 3 million voters – say they would consider it if the party changed. The less good news is that the change that might help isn’t talking more about who is the purest Brexiteer during a leadership contest. The report also rather ducks any trade-offs between generations, not least on the big question of how we pay for the rising cost of the welfare state into the 2020s, as my RF colleague David Willetts set out in his response. If you can’t get enough of this stuff, another interesting take on the plight of modern Conservatism this week bemoans the lack of serious economic thinking….

Watery divides. I love a good canal. So it turns out do home buyers. A new, slightly esoteric, paperinvestigates how much extra we’re prepared to pay to live (very) close to a canal – an average of 3-4 per cent more. But I’ve got some cunning advice for you. Yes you can pay a bit more for a flat or house overlooking a canal. OR you can pay a lot less to actually live on one. It’s house boat time people.

Historic divides. There are big questions in economic history, and then there are huge ones. The role slavery played in boosting Anglo-American economies fits into the second category. How crucial was slavery to driving Great Britain’s industrial revolution or US economic expansion by creating either the raw material or bigger markets required? Marx said very crucial: ‘Without slavery you have no cotton; without cotton you have no modern industry’. But an interesting new take suggests that while that may have been the case with the sugar trade, ‘cotton was not sugar’ – it could and was produced without slavery. The fact that British and American economic interests were less reliant on slavery in the 19th Century is not coincidental to the UK abolishing slavery and opposition to it in northern US states.  If that whets your appetite for some economic history, come along to an upcoming RF event in which we discuss 700 YEARS of wage growth across Britain.

Genetic divides. Do people have different incomes because they have very different IQs? Yes, but it’s far from all that’s going on. That’s the conclusion from new research that finds IQ differences can only explain 21 per cent of the variation in income between people. You might think this is good news if it means hard work, not just IQ, gets rewarded. Or less good news if it means Tim Nice-But-Dim is not only around but raking it in.

Chart of the Week
This week the Resolution Foundation has been focusing on the future of social housing, a topic that has seen a welcome return to policy attention in recent years. There are strong arguments for more social housing, not least if you want sustainably mixed communities. But there are big questions we need to asktoo if we are to see a renewed programme of social house building. One major critique of social housing is its association with low employment rates. Only around half of social renters are in employment, compared to four-in-five non-social renters. However, as our Chart of the Week shows, 60 per cent of that gap can be explained by the fact that social renters are more likely to be lone parents, have a disability or other characteristics that mean they face labour market barriers whatever form of housing they live in. The conclusion? We shouldn’t allow the headline employment gaps to be the end of the story, but we should renew our efforts to improve employment outcomes for social renters. So the future of social housing isn’t just about bricks and benefits. It’s about buses and buoyant job opportunities too… 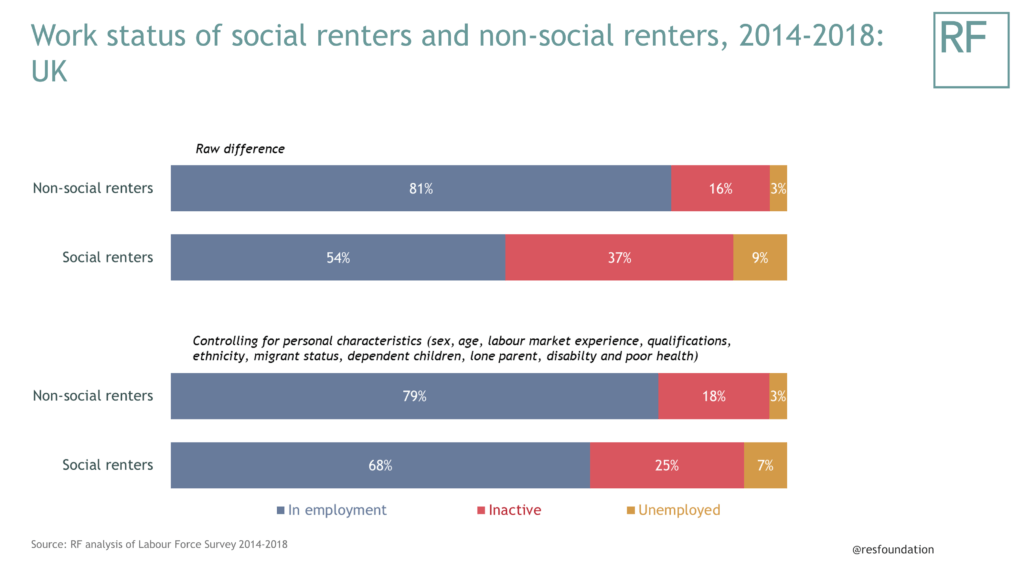