There’s been a lot to think about this week – how politics can really matter, and about how the big decisions we take can shape the future for generations to come. Theresa May might be standing down as Tory leader today, but she had a good week representing the country in D-Day commemorations on both sides of the Channel.

The coverage of much more difficult times is a good reminder that we should be asking, to slightly cornily paraphrase Heather Small, ‘What did we do today to make our children and grandchildren feel proud?’. Not enough I fear is the answer.

But to bring some optimism into the picture, this week’s reads are heavy on the good news – on poverty not lasting as long in the UK as elsewhere, to faith in experts and the success of Sure Start.

And if that’s not enough sunshine for you, we’ve got some great new opportunities to work here at RF.
Have a good weekend,

Poverty persisting. When it comes to poverty, we don’t just care about how high it is, we also worry about its long term effects on people’s lives. So how long poverty lasts is a very good question to ask – which is exactly what the ONS did this week. The key takeaway is that while UK levels of poverty are around the EU average, we have lower levels of persistent poverty – a measure of who is stuck in poverty today, having also been in it in previous years. This is obviously a good thing – and shows why a tight labour market is desirable. But it’s worth understanding what this tells us about Britain today. As we’ve discussed before, it means we are a country that combines high inequality with pretty high living standards volatility among households in the bottom half of the income distribution. Year-to-year, high income families generally stay pretty much still (ie at the top), while the relative economic status of low and middle income families churns.

Experts bite back. On Monday it was exactly three years since Michael Gove told Sky News people have ‘had enough of experts’. We didn’t take it personally. Honest. Helpfully for our anger management, new research (blog) says he was mainly talking nonsense. What evidence that does exist suggests broadly positive attitudes towards experts – in fact they go a bit OTT in thinking experts, not party politicians, should make up political institutions. For more on the perils of politicians who dismiss experts I strongly advise watching the critically acclaimed Chernobyl mini-series.

Who goes where. Where do different groups of people live in cities? Traditionally (and largely based on US research) people have assumed that the further you go out from the city centre, the richer households tend to be – because high income families choose the big houses and space that suburbs provide. A new study focusing on the eight largest English cities outside London paints a more nuanced picture. Yes in Birmingham higher income families do live further out, but in Sheffield the opposite is true. And once you take into account other factors, income levels aren’t driving location choices. More important for example is the fact that migrant households live 25 per cent closer to the city centre than other households (Bristol is the exception). The most worrying finding? Unlike everyone else, the location of unemployed people does not depend on public transport access…

Govern away. Applications for the next Bank of England Governor have now closed. Sorry if you missed the deadline. With an eight-year term lasting until 2028 and a huge range of responsibilities, from managing inflation to maintaining financial stability, there is going to be a lot of governing to do. But a striking letter this week from campaigners for central bank reform argues that we actually need even more governing. Their additional asks of the next Governor include 1) driving the move away from fossil fuels 2) ensuring the Bank’s policies reduce inequality and 3) direct credit away from property speculation and towards productive activities. There are some serious signatories to the letter, but not everyone is convinced. This response from ex-BoE economist Tony Yates argues that our elected politicians might want to have a crack at these instead….

Starting surely. A great new piece of research from our friends at The IFS looks at the health effects of Sure Start. The findings are almost unbelievably strong – an extra Sure Start centre for every 1,000 kids under 4 translates into 5,500 fewer hospitalisatons by age 11 – an 18 per cent fall. The improvements were biggest for children in disadvantaged areas – there was little impact on children growing up in the richest 30 per cent of areas. This work is particularly valuable because it builds on previous literature that focuses on different impacts of Sure Start – from parental well-being to children’s academic achievement. That evidence taken in the round is what should inform our view about whether the two-thirds funding cut since 2010 is a good idea or not. Clue: it’s not.

Chart of the Week
We all like a good story. But problems arise when it turns out they’re not true. The common troupe of millennials being footloose and fancy free when it comes to where they live and work is a classic example. In fact, as new RF research (blog) has found, we’ve become a less mobile nation when it comes to moving for work. Why? There are good and bad reasons. The good news is that fewer unemployment blackspots means people are less likely to be forced to move to find any work these days. But, as this week’s Chart of the Week shows, its bad news that faster rent rises in higher paying places have reduced the living standards uplift that people taking up a new opportunity elsewhere can expect. Back in 1997, a typical move from Scarborough to Leeds would have meant a 29 per cent earnings uplift, once the rent had been paid. Today, that uplift has fallen to 4 per cent. Meanwhile, a typical move from Sunderland to York today would actually leave you worse off post-rental payments despite the higher pay in the ex-Viking capital. Jobs existing where you already live is a good thing, being locked out of opportunity elsewhere is not. 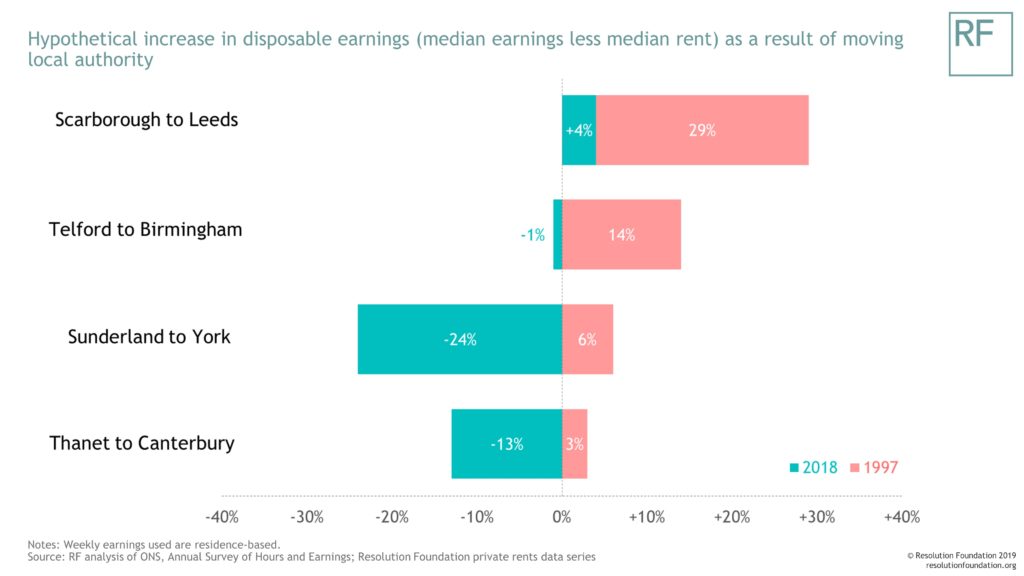