Donald Trump is coming. Obviously this isn’t about us getting what we want, but maybe it’s exactly what our divided country needs. For the same reason he’s such a deeply divisive figure in the US (due to the whole misogyny/stoking racial divides schtick) maybe he’ll provide us with some much-needed unity via an offensive tweet or two. And however painful you find it, remember to feel grateful you’re not the Queen – she’s got to meet the whole Trump clan. And smile. No palace is worth that.

More perkily we’ve got some very good news this week – check out Chart of the week for evidence of falling low pay.

Millennial cities. Urban economists often make the argument that once young people settle down they move out of cities and into the suburbs, following their parents and grandparents before them. But maybe life isn’t just about history repeating itself. A new American study (blog here) finds that not only have young people been a driving force in the urban resurgence over the past two decades, but they favour living in central urban neighbourhoods significantly longer than previous generations did at the same stages in life. Millennials are busy envying the home ownership of the Boomers but not their suburban lifestyle choices. Sex and the City wasn’t set in Orpington for a reason.

Educating England. Progress on raising our qualifications and skills has stalled. So it’s worth a read of this week’s long awaited Augar Review – a government backed examination of post-18 education and funding – to see if it has any answers. Philip Augar has a crude but not unreasonable take: ‘England is a nation of two halves when it comes to post-18 education. Last year, over £8bn supported 1.2m undergraduates in HE, just £2bn supported 2.2m adult FE students’. So what to do? Well the review provided over 60 recommendations over a 216 page document. Despite the whole point of the review being that we need to focus more on FE, the headline that got all the attention was about the reduction of university tuition fees (to £7.5k). Sigh. More attention and cash for our technical education system should be the real takeaway. Of course, none of this comes cheap or is going anywhere until we’ve got a new PM – something Tory leadership candidates promising billions in tax cuts might want to think about.

The winner is Estelle McCool from King’s College Maths School. Not just for having the best name on the planet, but for winning the Bank of England and FT schools blogging competition. The post ‘Currency will be no longer determined by those in power’ received plaudits for its engaging writing, insightful analysis and use of developing economies’ experiences with new types of currency to inform the global debate on the future of money. The future of money – Estelle eloquently describes – ‘does not lie in the hands of white men from the West’, a point she illustrates by reminding us that 96 per cent of Kenyan households already using Mpesa (mobile money).

Economics lessons. Evan Davis is now well and truly settled into presenting the PM programme. We know this not only because he’s brilliant (polite but probing is the interview style), but because the former BBC economics editor has indulged himself with some economics chat in recent weeks –  examining the state of the economics profession ten years on from the financial crisis (listen here). His summary blog is a great read. Key takeaway = too often economists have focused on questions because related data happens to exist rather than because they are the most important questions. We couldn’t agree more – asking the right questions is more important than having the most advanced stats…

Lessons learned? Last week we covered the importance of good writing in economics books. But today we’ve got a more fundamental challenge to one of the key reasons we all read such books in the first place – to learn something. A fascinating blog (found courtesy of @jamestplunkett) suggests that books are in fact a rubbish medium for us learning very much – rightly noting that often we read an interesting book but can’t recall its key arguments a few weeks later. It’s rather a hard message to take for a weekly email dedicated to encouraging interesting reading but does contain some good advice for those of you not giving up on the whole reading thing – take notes!

Chart of the week brings good news to get you through the Trump visit. The proportion of Brits that are low paid (earning less than 2/3 the typical hourly rate) has been falling over the past few years – the first sustained decline in 40 years. As we detail in our annual Low Pay Britain Report, these declines are being driven by the ramping up of the National Living Wage. Last year saw a 200k fall in low pay, with women and young workers the biggest beneficiaries (because they are worst affected by low pay). The less good news is that 4.7m people are still in low pay, and many more earn less than the actual Living Wage. So good news but the fight goes on. 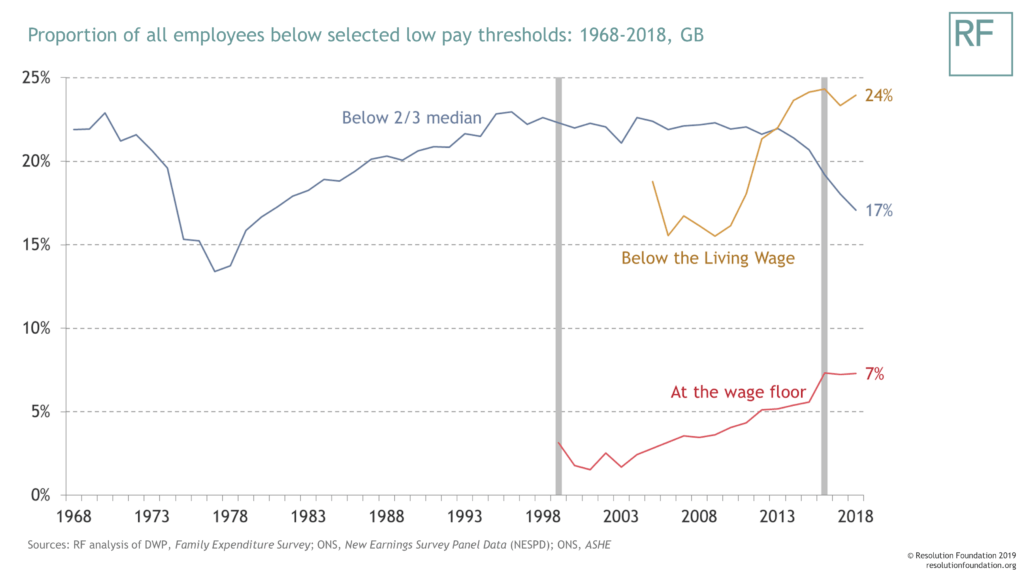