Having spent this morning at the dentist enduring fairly nonstop pain for no real progress I have new found empathy for the Prime Minister’s experience this week. She can obviously take some comfort from the evidence that her would be assassins of the ERG variety are a bit more Johnny English than James Bond.

There’s even more comfort from the news this week that the labour market, if nothing else, is ‘strong and stable’. Employment has returned to a record high, full time work continues to increase and pay is growing at its fastest rate in a decade. That last point is obviously encouraging – although it’s a bit like the Faroe Islands winning a football match and then declaring it to be their best winning run in a decade…. true but slightly missing the bigger picture.

PS – we care a lot about living standards here at the Resolution Foundation – including yours. So we have a one-time only, limited edition, mega discount offer for those of you who are strapped for cash and want to get your intellectually curious in-laws a present they will instantly never forget: sign them up to Top of the Charts (in a GDPR-compliant way obviously, like telling them when they’re drunk).

The Hours. Last week we touched on the whole ‘Britain is great’ theme – and right on cue the OECD have jumped on the bandwagon with some productivity news to perk us all up. New research (ONS takeand FT summary) provides respite amid the decades-long gloom about our rubbish productivity lagging behind the likes of France, Germany and the USA. Calculating productivity basically involves adding up how much we produce and dividing it by the number of hours we work – so the OECD had the CRAZY idea of checking that different countries calculate the number of hours we work in the same way. They found that if more consistent methodologies are used, Britain’s productivity gap is a lot smaller than we thought – falling from 24 per cent to 16 per cent with the USA for example. The good news is that at this rate of improvement there’ll be no productivity gap by the New Year. The bad news is we’re still way behind ­– and it’s harder actually increasing our productivity than improving some stats.

BFG. There aren’t many new ideas in political economy, so good on Nick Hanauer for suggesting one this week. Nick argues we should go beyond progressive taxation to progressive labour standards, with more onerous requirements for larger firms, for example requiring them to pay a higher minimum wage than small businesses. This approach is partly motivated by a wish to address the new bogeyman in American political economy: giant firms excercising too much market power to the detriment of competitors and their workers. Our research doesn’t paint as grim a picture of competition in the UK, although large firms have increased their market share this century. Crucially however in the UK they are employing a smaller share of the workforce. So the UK problem may be less about big firms employing everyone and treating them badly, and more that not enough people work for the most productive firms – something his proposals could exacerbate. One to think long and hard about – which is the point of new ideas.

Sister Act. This is good news. For me at least, as the father of an older girl and younger boy. A new paper shows that if I put the effort into getting Frida educated, Joseph gets a boost as well – two for the price of one kind of thing. Now the eagle eyed of you might notice that the paper is really focused on the benefits of educating girls in developing countries, where the eldest daughter may also bear significant responsibility for raising younger siblings. Given that there is precisely no such responsibility being taken in our household maybe I shouldn’t get too excited…

The Land before Time tax. Ask any economist, anywhere, at any time, and they’ll probably tell you that land value tax is the tax they dream of. Land can’t run away, can’t be hidden, and won’t reduce in quantity if it begins to be taxed. But as anyone who’s worked in politics can testify, land taxes are far easier said than done. A new report for the Scottish Land Commission looks at the practicalities of implementing a land value tax in Scotland, considering such issues as the role of the planning system and the land register, and how to dovetail a new land tax in with existing taxes in this domain. The Commission also produced a briefing note on the issue, to show how land value tax could address a wide range of policy objectives. Which is nice. It’s still not going to happen.

Death Wish. On a different note, here’s a tricky challenge that policymakers around the world are wrestling with… the worrying trend of people dying while taking selfies in risky places. This Wikipedia page has long kept track of them, while an article in 1843 magazine takes a brief look at how authorities are trying to help. In Mumbai, for example, the police have identified 16 hotspots where selfie-takers need to be warned about the particular dangers. The issue also opens up the tricky question of censorship by search engines: should YouTube take down videos that might inspire people to take these risks? There is also an even more controversial answer – we could take slightly fewer pictures of ourselves.

Chart of the Week comes from a bumper week of stats for those interested in the state of Britain, with the latest regional growth figures published the day after the labour market stats (and troubling life expectancy numbers, which showed a fall in poorer areas like Hartlepool and Blackburn). Regional growth in Britain over the last 20 years has been a game of two halves (with the worst half-time team talk ever), as this week’s Chart of the Week shows. Takeaway 1) London is at or near the top both pre- and post-crisis – although be careful because the growth post-crisis is all about employment growth NOT higher productivity growth. Takeaway 2) For all the talk of the Northern Powerhouse in recent years, the North has actually been supplanted by the ‘Midlands Engine’ in the post-crisis growth league. 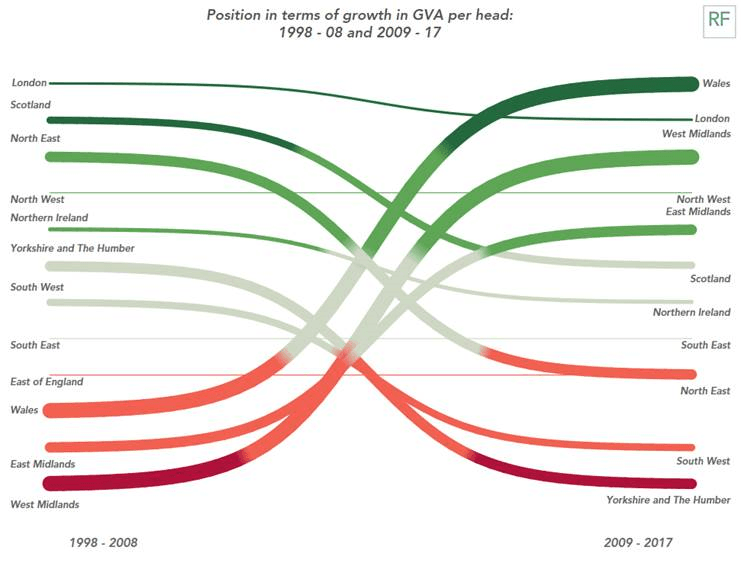