It’s all a bit last days of Caesar in Westminster – we’re definitely in the Ides of May. There was no going back once the PM crossed the Rubicon broke bread with Corbyn.  Andrea Leadsom struck the first blow, and it finally ended today with the immortal words ‘et tu Brute Brady?’

The bad omen news for the country/Conservative party is that Caesar’s death triggered a 13-year civil war. The good omen news for those of the 300 or so leadership contenders that like to play the long game is that Ceasar’s ultimate successor Augustus ruled for over 40 years.

Have a good weekend, and if you’re having GoT withdrawal symptoms, do check out the gorier, non-fiction series – the end of the Roman Republic.

More reading, better writing. The paperback of Deirdre’s McCloskey’s Economical Writing: Thirty-five rules for clear and persuasive prose is out. Earlier this week Diane Coyle posted her views on it – her favourite of the rules is “Be Clear” – which isn’t what many economists bother to be. The book itself begins with the line ‘the main cause of bad writing in economics is that economists don’t read good writing’ – if they’d read the likes of Jane Austen or George Orwell, or even Adam Smith, by and large their writing would improve. Martin Wolf made a similar point at a lecture last year when he emphasised that the FT – by and large – hires for writing skills not economics knowledge. We’re sympathetic to this argument – the initial idea for Top of the Charts was to encourage RF staff and others to read more, and more widely. But not too widely, obviously… we don’t want your novel getting in the way of this week’s reads.

More helping, more buying. The government’s flagship Help to Buy (HTB) scheme helps youngsters become first time buyers – a welcome aim even if the scheme has its fair share of critics (we’ve noted the questionable logic of it going to fairly high income families). It does this in part by providing a (highly subsidised) equity loan from the state. Buyers like this because it reduces the size of a deposit required, and there’s a longer history of economists liking such ideas if they partially insulate people from big ups and downs in house prices. That’s the angle explored in a fascinating new Bank of England working paper(blog here). Its conclusion is rather dispiriting – despite it being sensible for us all to protect ourselves against house price movements we’re really not interested in that, and are using the scheme to buy bigger houses rather than to reduce risk. When it comes to housing at least we really don’t seem to believe that what goes up must come down…

More Chinese millennials, more debt. Before the financial crisis China was showing you could have growth without debt. Since the financial crisis this has all changed – with household debt almost tripling since 2008. It turns out Chinese millennials love the credit card. There’s more than 400 million of them – more than in North America, Europe and the Middle East Combined. This was the ­topic of a recent edition of Stephanie Flanders new(ish) podcast ‘Stephanomics’. It’s interesting economics, but also fascinating social history. The millennials are very different to their predecessors – the prolific savers – and prefer to spend on things like a $30 shower for their cat…

More youth, better unions. The world of work, and how to improve it, has never had more public and political attention. People want to see higher wages, more secure work and dignity for people whatever they earn. That should be very fertile ground for trade unions – the movement through which workers have collectively improved their own lot over the years. But for that to happen they need far better engagement with young workers, says the European Trade Union Institute (ETUI). The ETUI’s review of the UK, France, Germany and the US notes that union memberships are ageing even more quickly than our workforces (something we’ve touched on). The report argues for changing the culture of trade unions to allow more innovative forms of worker organisation – backed but not consumed within the existing union cultures and practices. That’s how young members can revitalise not only the membership base of trade unions, but their vitality and diversity too.

Less dinner, more deals. In all kinds of negotiations people think that a shared meal or glass of wine can help build trust and improve outcomes. So much do we think that’s the case that companies can deduct the costs of such things from their tax bills – it’s not a nice dinner but part of doing business, or so the story goes. This assumption is put to the test in new research. The authors set up an experiment that saw some MBA students negotiate with each other immediately, while others first of all engaged in some wine tasting (the experiment took place in France. Obviously). The result? Pre-negotiation pleasantries made no difference to the negotiation outcomes. So maybe all those business dinners are really just people enjoying consuming, rather than having much to do with producing.

Chart of the Week delves into the big non-resignation related issue of the week: poverty. We have heard about the extremes of UK poverty in a (rhetorically overblown but still sobering) UN report, how to tackle it in Scotland from the Scottish Poverty and Inequality Commission, and last – but definitely not least – new RF research into how poverty rates have shifted over the course of people’s live and across different generations. Our chart of the week looks at how different generations have experienced relative poverty over the last six decades. Here’s three key takeaways 1) Britain used to have scandalously high levels of pensioner poverty – in the 1960s, around 45 per cent of pensioners lived in relative poverty. 2) We’ve done a pretty job of reducing pensioner poverty, cutting it by two-thirds for today’s baby boomers via strong income growth and improved state pensions 3) We’ve done a terrible job on child poverty, with rates rising on the back of economic (higher inequality) and social trends not being tackled by our social security system. Doing something about the fact that a third of kids being born today are being born into poverty would be something a new PM of any stripe could do with getting on with. 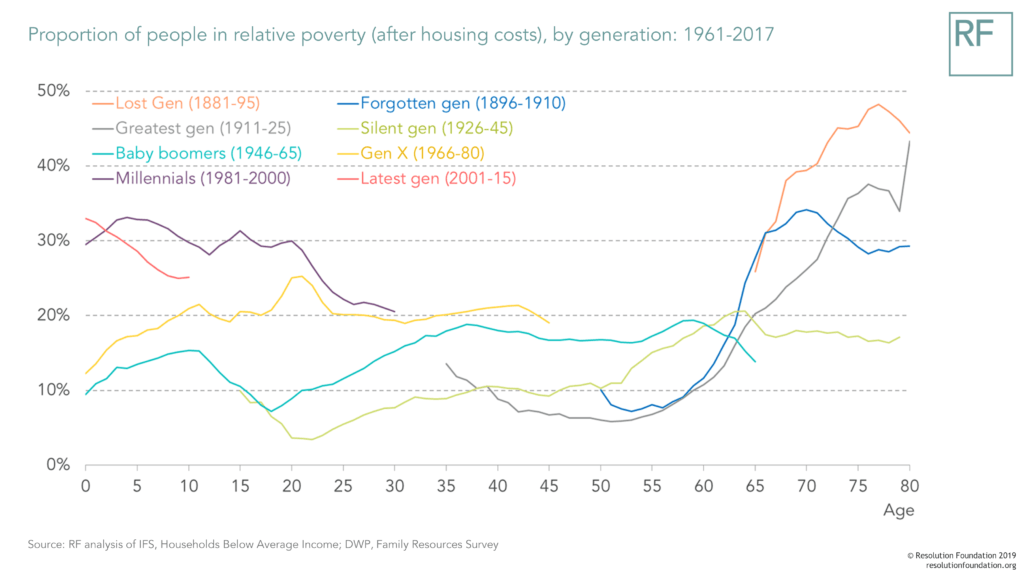