Tuesday’s labour market data contained good news on unemployment, which fell to its lowest level in 50 years, but bad news on real pay, which is falling and set to fall faster. There are very early signs that labour-force participation might be starting to reverse the huge falls we have seen since the pandemic, but it’s too early to tell whether this will become a trend.

More vacancies than unemployed – for the first time

Unemployment fell again in the three months to March, down to 3.7 per cent – the lowest level since 1974. Meanwhile, the number of vacancies rose to almost 1.3 million, meaning that there are now more vacancies than unemployed people for the first time on record. 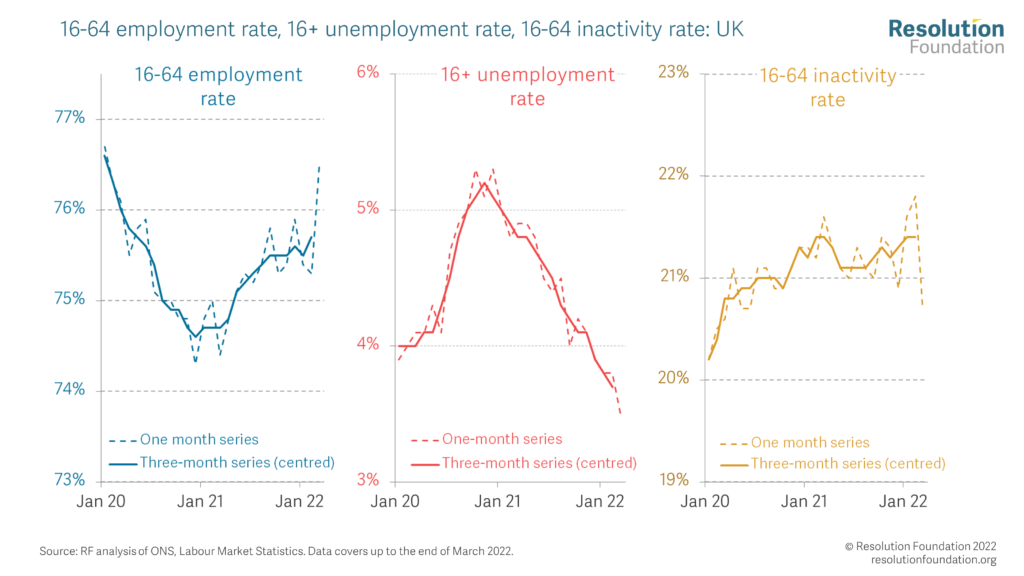 These vacancies are being filled at the fastest rate in at least two decades – firms were hiring around 700k people a month at the start of the year (Figure 2). But given the sheer number of vacancies, they are taking longer to fill than pre-pandemic – around 1.8 months, compared to something 1.4 months in 2019. 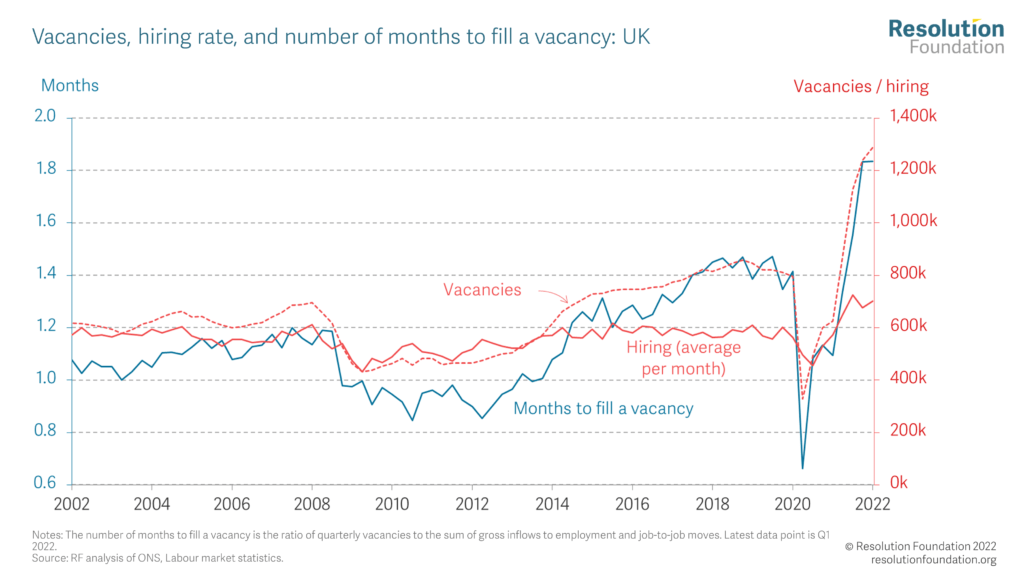 Bonuses are strong, but regular pay is not keeping up with inflation

A tight labour market is a good thing, giving more choice to workers and helping those on the margins of the labour force to get jobs. It can help workers get pay rises that their employers can reasonably afford.

But one can have too much of a good thing. A labour market that is too tight could mean that pay rises at a rate that will force firms to increase prices even faster than they already are. The result would be more inflation and a bigger job for the Bank of England to bring it balance. No-one knows how low unemployment can go before creating these problems. Striking this balance is the Bank’s most important task over coming months.

The signals from the pay data are noisy. On one hand, regular pay (excluding bonuses) rose by 4.2 per cent in the year to January-March 2022 (figure 3). This is a respectable rate but by no means warp speed. And it was slower than inflation, such that real regular pay – what you can buy with your wages – fell by 1.2 per cent. As inflation accelerates towards and into double digits later this year, we can expect real pay to fall faster. 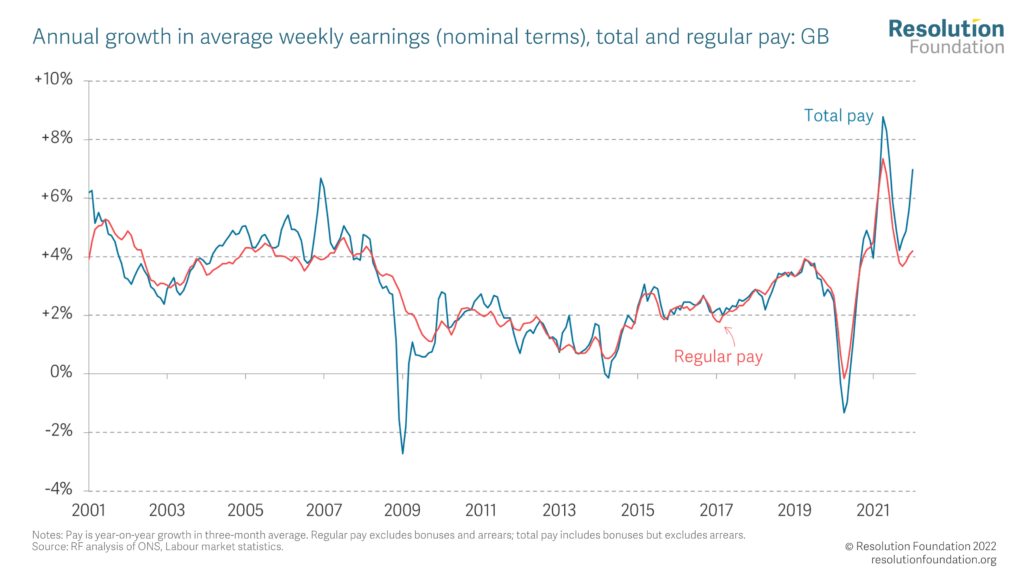 On the other hand, when bonuses – which rose at a red-hot 30 per cent on the year – are added in, pay growth was 7 per cent – faster than inflation and almost certainly a rate that the Bank will not be comfortable with. These bonuses are, as normally, concentrated in finance and business services. But if some of them are being paid to recruit and retain workers, they represent part of the cost to firms of employing an extra worker, and might therefore come to be reflected in higher prices as firms try to recoup these costs.

Last of all, pay growth is still being distorted by the furlough scheme, which pushed down the level of pay a year ago and so is pushing up the growth rate now – by around 1 percentage point on our reckoning.

Pay rising faster at the top

Some media comment has suggested that the tight labour market has been of most benefit to those at the bottom of the labour market. Unfortunately, there is no sign of this in the data – the 10th percentile of the pay distribution rose by 0.9 per cent in the year to January-March 2022, while the median rose by 6.2 per cent, and the 99th percentile rose by 11.1%. It is possible that composition is distorting this somewhat. But there is no evidence in these data that a tight labour market is compressing the pay distribution.

Participation could be turning a corner

After all this gloom, let me end, if not on a high note, then at least an ascending one. One of the big, bad consequences of the pandemic has been a fall in labour-market participation – people either in work or looking for it – of around 1 per cent of the 16-64 year old population . In the latest data, we see very early signs of a reversal (Figure 1 again). This would be great news if it persists – unemployment can’t fall much further, real pay is going to be squeezed for some months, so the main place that labour incomes can increase is through more labour supply. However, this is just one month of a volatile data series, so we shouldn’t get our hopes up yet.