Yesterday, the Chancellor announced that last week’s pledge to underwrite 80 per cent of the wages of employees without work to do during this crisis is being matched with significant grants to the self-employed. This is an important addition to existing plans to support employees, and in many ways a more generous offer.

The Self-Employed Income Support Scheme will pay cash grants covering 80 per cent of self-employed trading profits averaged over up to three years of tax returns, covering the three months to May. The new scheme has the same £2,500 per month cap as that in the Coronavirus Job Retention Scheme for employees, but adds in further exclusions. Those earning over £50,000 are excluded, as are those who only became self-employed in the recent past and so have no tax return for the 2018-19 financial year, and the self-employed who have incorporated as businesses and receive the bulk of their income via dividends or an employee salary (with the latter income source potentially covered by the employee retention scheme, of course).

The Government stressed that 95 per cent of people who receive the majority of their income from self-employment will be covered by the scheme. For this group, yesterday’s announcement represents a huge improvement in the level of prior income they will hold onto (the ‘replacement rate’) should work dry up, matching the employee picture after last week’s retention scheme announcement. 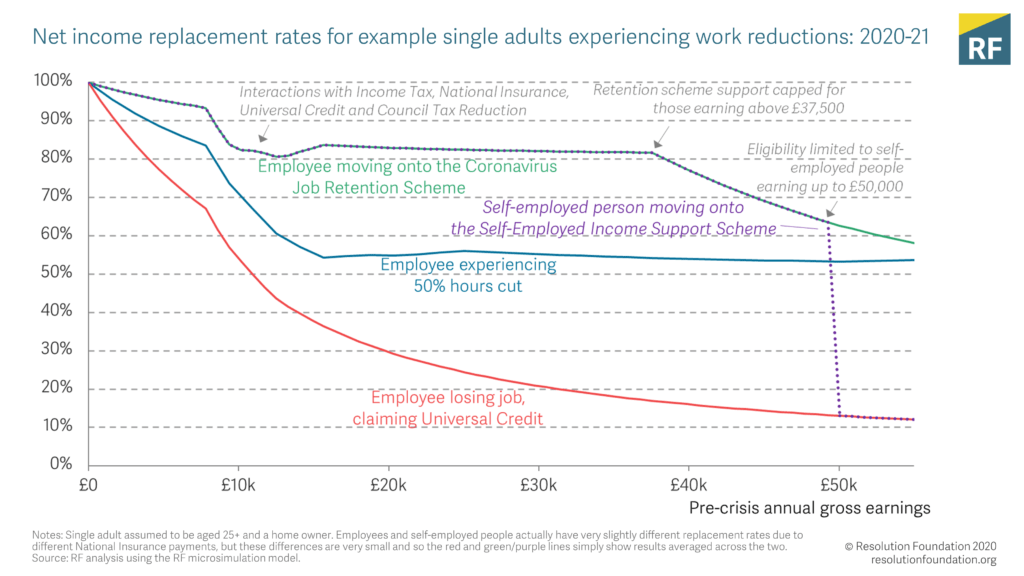 This scheme is in fact much more generous in some ways than that for employees. Although the Chancellor pitched it as being targeted at self-employed workers actually affected by the coronavirus outbreak, in practice self-employed people will be able to claim a grant irrespective of whether their income has actually fallen. This blanket payment approach means that the costs of operating this scheme will be high, although also highly uncertain. HM Revenue and Customs data on self-employed earnings suggests that it could cost around £10 billion over three months if everyone entitled to it claimed.

Given that it is very difficult to know in real-time the extent to which self-employed people’s incomes have been hit in this crisis, a more targeted approach would have been to focus the scheme on those most likely to be facing challenges, or those who certify that they are in practice experiencing hits to their incomes. For example, there are 1.7 million self-employed workers who are likely to face major income losses because they work in the sectors most affected by the current lockdown, or are parents affected by school closures. 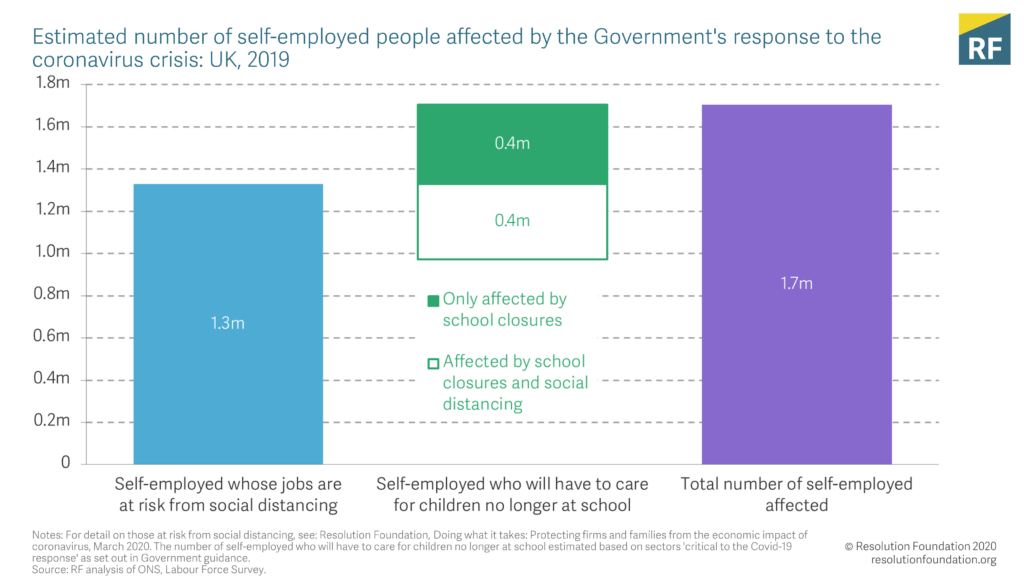 In recognition of the substantial support being introduced for the self-employed, the Chancellor also used his announcement yesterday to suggest that there may be quid pro quos down the line. He suggested that after the current crisis, the Government will need to consider the tax treatment of the self-employed, including via the welcome and long-overdue equalisation of National Insurance contributions for self-employed workers. As it stands, a self-employed worker on £25,000 currently pays £1,550 in personal National Insurance contributions, compared to the £1,850 paid by an employee earning the same amount (whose employer also pays £2,230). For those self-employed people operating as companies, the amount of tax paid on large incomes can be lower still. 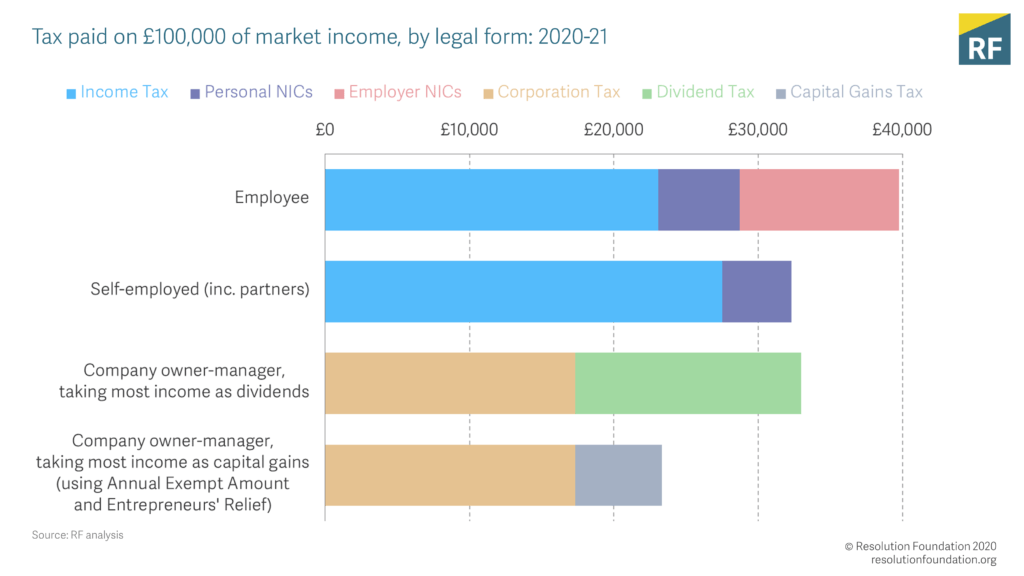 Yesterday we also got more details about how the Coronavirus Job Retention Scheme will operate. These included the welcome news that it will cover people on zero-hours and agency contracts so long as they are paid through standard payroll schemes, and that those who have recently been laid off can be rehired to go onto the scheme. In addition, reading between the lines, those not eligible for Statutory Sick Pay (SSP) will be able to go onto it (although a better approach in this area would be for the scheme to just supersede less-generous SSP for everyone, for the time being).

The big gap in the employee retention scheme is that the Government has not made it available to those whose hours have been reduced but not fallen to zero. As we’ve argued and as the first chart above shows, this is a big problem for families’ incomes during this crisis. And it is very undesirable because it provides a big incentive to employees to ask their employer if they can cease work entirely, which risks deepening the economic shock Britain is experiencing.

This takes us to the other big gap across the two schemes the Government has now announced. Employees have already lost jobs despite the retention scheme – almost half a million people have made new Universal Credit (UC) claims in the past nine days – and they will continue to do so, not least because some firms will go bust. As the first chart above shows, this group who have definitely experienced a big hit to their incomes from the crisis will be treated much less generously than the self-employed, including those who have experienced no hit at all.

The Chancellor has plugged a gap in support for one group – the self-employed – but left a significant gap for others. As well as extending the job retention scheme to those facing reduced hours, he should extend the income support scheme announced yesterday to employees losing their jobs, on the basis of previous pay checks (which the Government has access to as part of its RTI earnings data collection).

In the meantime, with the new income support scheme not making payments until June and claimant numbers rising rapidly, there is an urgent need to ensure swift claims and payments of UC to avoid hardship. That should include ensuring that benefit advances are paid by default and as quickly as possible, and that repayment of these advances is paused for the duration of the crisis.

Yesterday the Chancellor filled a big hole in his crisis response with a, if anything too, generous offer to the vast majority of self-employed workers (with a welcome signal that their tax bills may need to adjust to reflect this later). This very significant package for the self-employed throws the lack of support for employees unlucky enough to lose their jobs or have their hours cut during the crisis into sharp relief. Alongside making sure our benefits system is coping with the significant demands now being placed on it, the Government will need to return to these people falling through the cracks of the two unprecedented wage support schemes announced in the past seven days.