For labour market wonks, ‘ASHE day’ is like your birthday and Christmas rolled into one. Each year around this time, the ONS publishes a plethora of spreadsheets packed to the brim with data on how wages have performed over the last year. While there are definitely some pleasant surprises in this year’s figures, there are also a few disappointments and causes for concern, along with the inevitable puzzles. Here’s a quick overview of what stood out today, with a focus on how lower earners have fared.

For the low-paying end of the labour market, the big story continues to be the National Living Wage (NLW). Today’s figures are from April 2018, when the NLW – the minimum wage for those aged 25 and over – had just risen by 4.4 per cent. The chart below illustrates the positive impact the policy is having. Hourly wage growth after adjusting for inflation was much higher for the lowest earners (those on the left of the chart) than at any other point in the distribution. 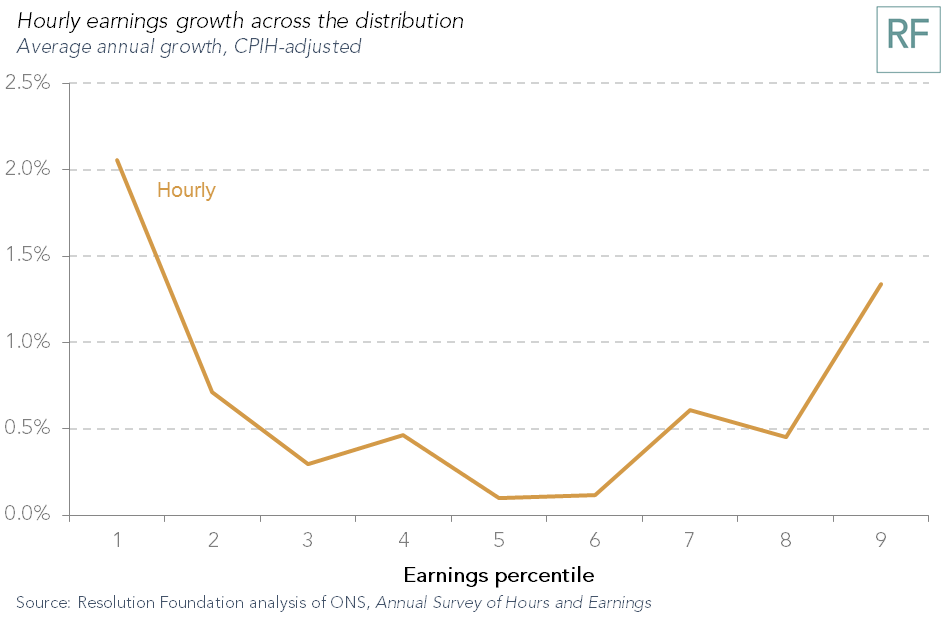 Given this, it’s little surprise that the share of jobs that are classed as low paid (less than two-thirds of hourly median pay, or £8.52 per hour in this data) has fallen to its lowest proportion (17.8 per cent) since this series began in 1997. That said, that still equates to about 4.7 million jobs that are paid less than that level, with 441,000 of those paid less than the minimum wage. This acts as a useful reminder that a higher minimum wage isn’t going to fix the issue of low hourly wages on its own.

Stepping back and taking a view of the whole hourly pay distribution, the ‘smile’ shape we first remarked on last year has re-emerged. The bottom and top end of the pay distribution have experienced relatively strong pay growth but it’s been less impressive for those in the middle. The summary from the hourly data then is good news for the top and bottom of the pay ladder but hardly a year to remember for everyone else.

When we turn to weekly pay however – arguably more crucial from a living standards perspective – a different and potentially more concerning story can be told. The chart below adds a line showing weekly pay growth across the distribution. From the 30th percentile and above, things actually appear much the same as on hourly pay, with the top doing best. But for those towards the lower end of the weekly pay distribution – specifically at the 10th and 20th percentiles – wages actually fell in real terms. This trend was visible in last year’s data too but was less pronounced. The ONS’s publication reports hours worked by part-time workers fell by 1.2 per cent compared with 2017, which may be a driver of this as part-time workers are likely to comprise the majority of those at the bottom of the weekly earnings distribution. 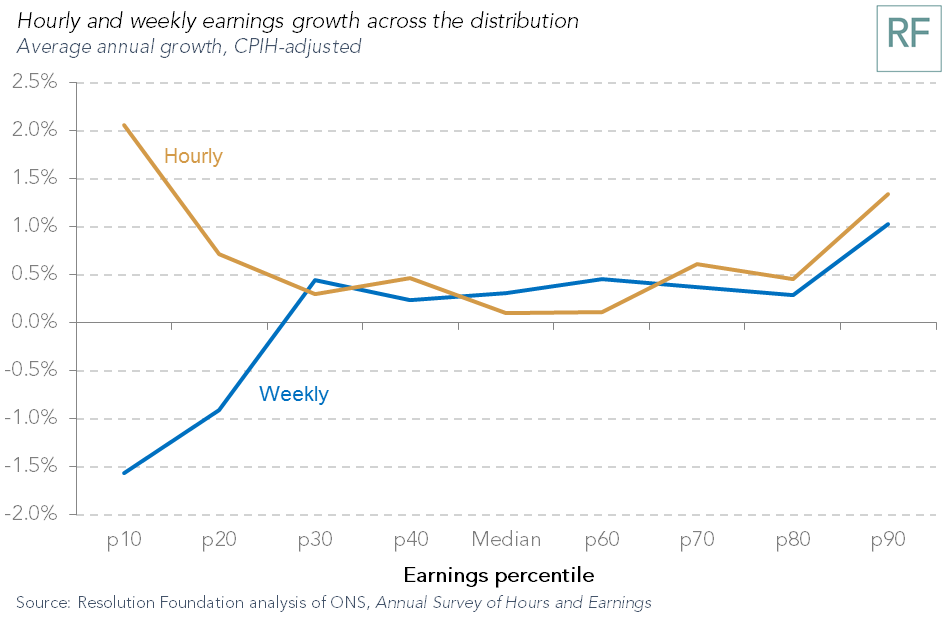 But that still leaves the question of why hours and pay are falling. There are a number of plausible theories and a deeper dive is needed to get to the bottom of this, but let’s do some speculating. First, compositional factors could be at play, with the sorts of people who are at the 10th and 20th percentiles this year different in some way to those in the same position last year. For instance, the ONS notes that an increase in the number of 16- and 17-year-olds in employment – more likely to work fewer hours and for lower wages – has changed the make-up of the workforce and has contributed to weak hourly pay growth for the lowest-paid part-timers.

One way of delving deeper into this compositional question is to separate out part-time and full-time employees. As the chart below shows, the lowest paid part-time workers experienced real-terms pay falls but the size of those falls has been smaller than the figures above for all. So while teenagers are a small group within the overall labour force, and there may be other compositional shifts within the low-earning part-timers, this suggests compositional factors may help explain this pattern. 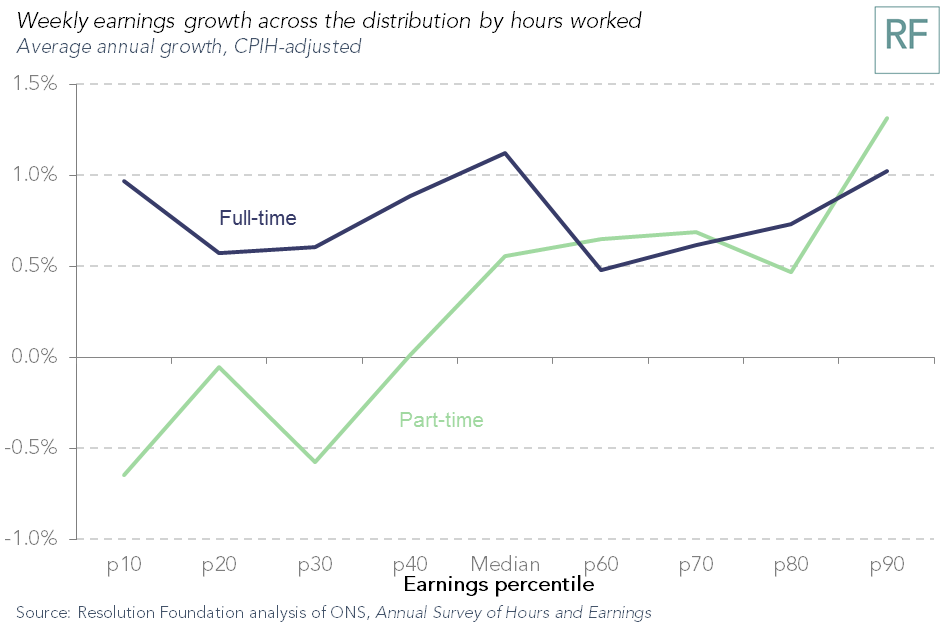 A second compositional theory is that, as the labour market has remained tight, it may be that more of those who were working part time but seeking longer hours have moved onto full-time contracts. Those remaining are more likely to want to be part-time, satisfied with their hours and therefore perhaps working fewer hours than the typical part-timer.

Third, other more worrying causes are possible. While the NLW is eating into low pay and has done so at a time of record employment, it could be that employers are reducing the number of hours offered to low-paid part-time staff as a way of reducing labour costs. One point it’s important to pick up here is that hourly wages are only one side of the weekly equation: the lowest weekly earners could have a high hourly rate but be working very few hours, or have a low hourly rate and be working more hours, or be somewhere in the middle. It’s certainly true that you’re more likely to be on the minimum wage if you’re a low weekly earner – one in three of those in the bottom weekly pay decile were paid at the wage floor in 2017.

But even noting that, this should still be a consideration for the government and the Low Pay Commission as the NLW moves ahead. The new rate that will apply from April 2019 may well be announced at the Budget next week, with the most recent OBR projection estimating it would be £8.20. Today’s figures are by no means a red flag for future increases, but should prompt further exploration of the exact drivers. Normal people aren’t likely to ever be as excited about statistics releases as us analysts, but carefully considering what those figures tell us can hopefully mean the headlines they see bring better news.