This August, as always, brought a host of headlines on academic results: from A level triumphs to parents’ confusion with the new(ish) GCSE marking system. Rather less attention, as always, was paid to students who pursued qualifications and pathways outside the traditional GCSE-to-A level-to-university route. For instance, apprenticeships, where young people can – in theory – progress from one level to the next, developing the skills required for a good career.

On Thursday, the Department for Education (DfE) published figures outlining the number and type of apprenticeships that were started in June of this year. And though the figures highlight that 90,000 16-18 year olds have been able to start an apprenticeship in the 2018/19 academic year to date, they also emphasise – as a recent Resolution Foundation note shows – the system’s overarching shift towards older apprentices taking on programmes at higher levels of study.

So first, the headline numbers. There were nearly 21,000 apprenticeship starts across all levels and ages in the month of June this year, a slight decline from the 25,000 in June of last year. And yet, the year-to-date figures, shown in the chart below, paint a rosier picture: between August and June of 2018/19 there were a total of 360,000 apprenticeship starts – an increase of more than 12,000 compared to the same period in 2017/18. 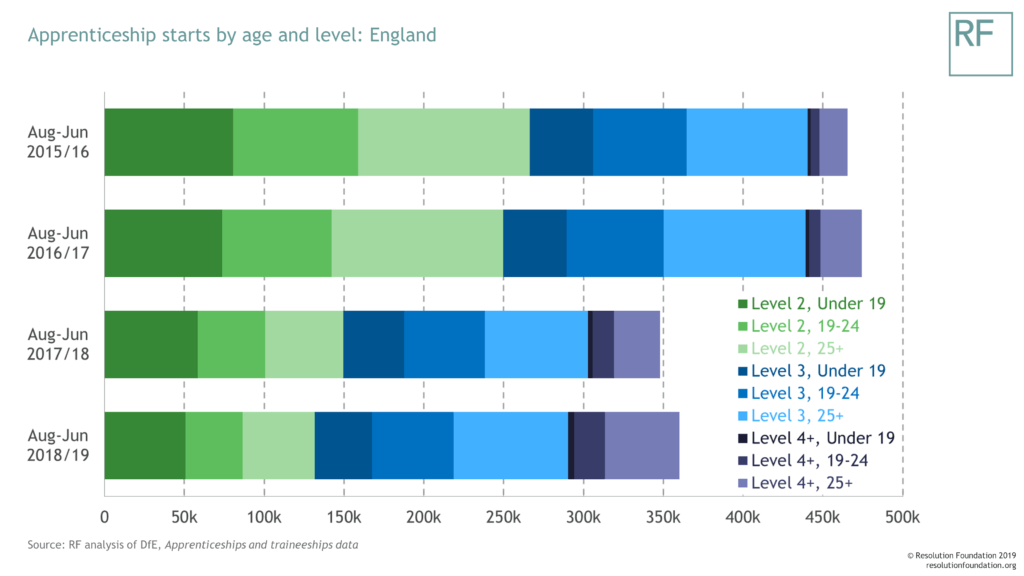 Then there’s the composition of starts: what proportion are going to older and younger people, and are they at higher or lower levels of study? So far in 2018/19, nearly half (46 per cent) of starts went to apprentices age 25 and older. Roughly one-in-five starts were at Level 4 and higher (higher-education equivalent).

The chart below pulls these factors together, showing the absolute change in starts, by age and level, between the academic year that preceded the apprenticeship levy and training reforms (August-June 2015/16), and this year to date (August-June 2018/19). The only area of the apprenticeships system that grew, in absolute terms, over this period was programmes at Level 4+. Within that, older apprentices have dominated: there were 29,000 more Level 4+ apprenticeships taken up by the over-25s in the year to date, as compared to the same period in 2015/16. This compares to 14,000 more for 19-24 year olds and just 2,000 more for the under-19s. 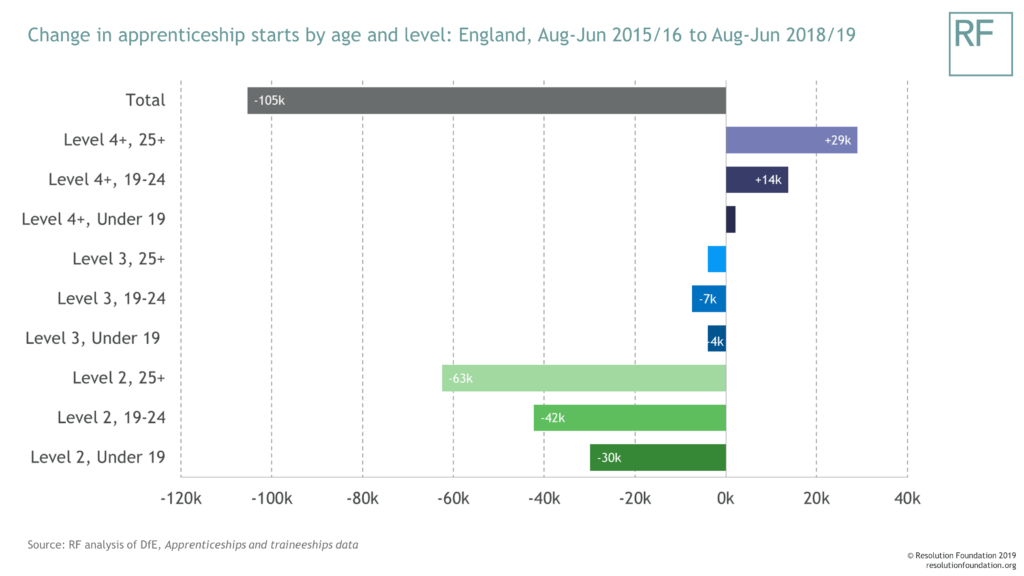 This breakdown underpins just how much the apprenticeships sector is shifting towards older apprentices at higher levels. Critics of the apprenticeship levy have been quick to blame it both for the fall in starts at Level 2 as well as the rise in starts by mainly older apprentices at Levels 4+. Our recent note casts a fair amount of doubt on the first of these assumptions: in 2017/18 (the latest period for which we have a full year of starts data) levy-paying firms were just as likely as non-levy payers to invest in the types of lower-level programmes that have experienced substantial reductions in numbers, as the chart below shows. 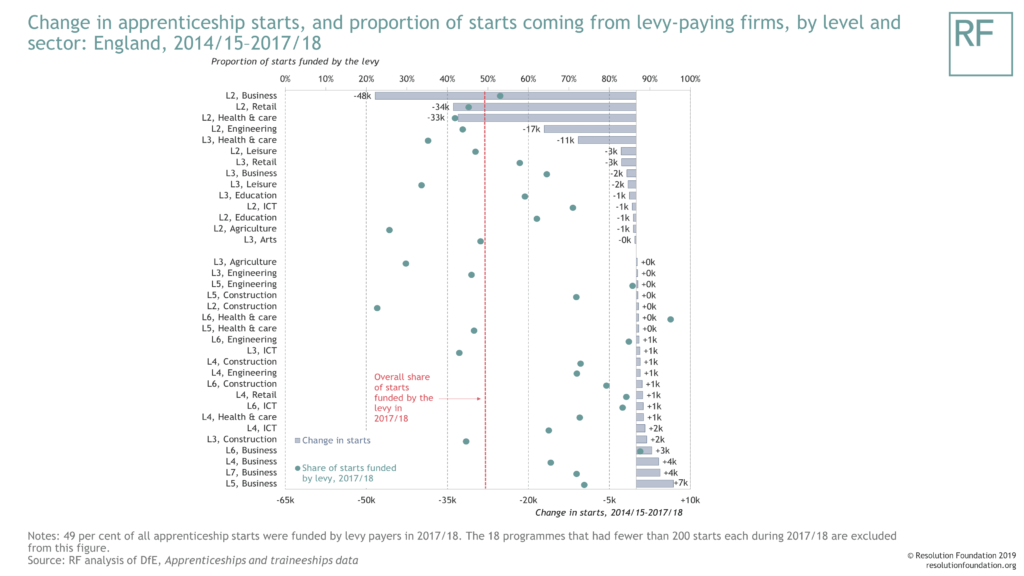 Instead, it looks as though regulatory reforms, which required more training (and more money), are a more convincing explanation for the reduction in numbers. This is indicated by the fact that the types of apprenticeships that experienced the most dramatic drops in starts offered fewer-than-average hours of formal training. In addition, a higher-than-average proportion of apprentices in these programmes were unaware of the fact they were classed as an apprentice.

We do, however, find evidence to support the second of these assumptions – that the levy is associated with a rise in the number of higher-level apprenticeship starts. In 2017/18, levy payers were, on average, more likely than non-levy payers to invest in these areas, as the chart above suggests. This conclusion becomes even firmer when looking at the figures for 2018/19 to date. So far, just 11 per cent of non-levy starts were at Levels 4+, as compared to 25 per cent of levy-funded starts, as the chart below shows. 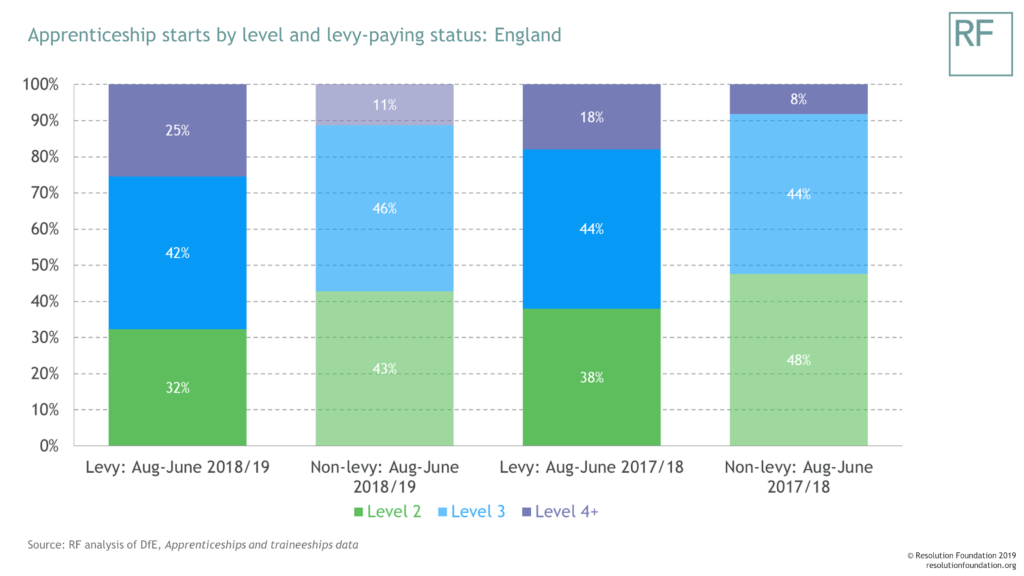 While it’s certainly not worth crying over a fall a in the number of poor-quality apprenticeships, there is some cause for concern when it comes to the rise in starts at higher levels. That’s because as shown above, these starts are not typically undertaken by those at the beginning of their careers: so far in 2018/19, more than two-thirds of these went to apprentices over age 25. What’s more, a DfE survey published in 2017 found that 83 per cent of all higher-level apprentices aged 25 and over were employed by the same firm prior to beginning their apprenticeship.

Given fears the apprenticeships budget could be overspent by as much as £1.5bn in 2021, policy makers are considering how to prevent an overspend. We at Resolution Foundation contend that they should hold firm on their recently implemented training rules, and put into place strong monitoring and enforcement systems. That’s because we think that apprenticeships’ core objective should be to offer a clear route to a good career for young people and new starters. To that end, policy makers should consider requiring levy payers to dedicate at least half of their levy expenditure to under-30s, and an overlapping half to new starters to the firm. None of this will be easy, but that doesn’t mean young people should have to settle for less.