Our Olympics medal tally is up (rowers aside), case numbers are down and holidays are here – so happy days. Two weeks camping drowning in drizzle in the Lakes means TOTC will be taking the next fortnight off. If you could all keep the declining Covid thing going while I’m away that would be much appreciated – we’re really looking forward to getting back to in-person Resolution events in the early Autumn. Oh, and it would be good to put the whole economic/psychological nightmare of the past 18 months behind us too.

And if keeping Covid down isn’t the limit of your pro-social actions this week, the economists among you should consider volunteering for the new mentoring scheme the Black Economists Network have just kicked off. Or you can donate cash rather than time to support this great imitative to improve the diversity of the economics profession.

Have a great weekend

Distressing diets. Public Health England are doubly happy we’re getting the pandemic under some kind of control. Not only because it’s their job to do so, but also because they’re worried about what it’s done to our weight. The launch of their Better Health campaign this week included the obvious/worrying news that 40 per cent of us have put on weight in lockdowns since March 2020. They’ve discovered we’ve been “snacking and comfort eating”. Thanks for that Sherlock. Recent research from the IFS provided some slightly more informative information. In the first lockdown we managed to increase total calories consumed by 15 percent. It was higher income (and therefore more likely to be home working) people doing the snaking. Guilty as charged.

Monetary musings. Everyone will learn something from Gertjan Vlieghe’s last speech as a member of the Bank of England’s Monetary Policy Committee’s this week. He has novel new takes on a less novel conclusion – that low interest rates are here to stay. For a central banker he’s unusually explicit about the role that higher inequality plays in pushing down interest rates (if rich people, who don’t spend, have all the income, you have to have lower interest rates to stimulate a given level of consumption). He’s even more unusual in taking that argument to its obvious conclusion: if you think low interest rates are a massive problem for macroeconomic policy you should get on with reducing inequality. Yes we should.

Central cryptos. We’re all bored to death of hearing about Bitcoin (we should largely regulate it out of existence). But digital currency chat is here to stay as central banks get in on the act. Earlier this year the Treasury and Bank of England set up a taskforce to investigate the idea, and a new survey of economists by the Centre for Macroeconomics confirms the new consensus: 84 per cent of economists think the Bank of England should produce its own digital currency. Why? Because it reduces the risk of bank runs causing a financial crisis (ie because people can hold their cash with the central bank rather than Northern Rock) and eases transactions/reduces the use of cash for illegal purposes. This one has quickly become a when/how not if question – and it’ll be a big change to how our economies and banking systems operate.

Cookies count. This isn’t new, but it’s hilarious. In universities there’s been a big move towards surveying students about their courses – with those results impacting funding, what’s taught and even academics’ careers. But how robust are these surveys? A paper from 2018 provides a slightly tongue in cheek warning. The researchers split a medicine class in two – both sets of students had the same teachers and course materials, but one half were provided with cookies (not just any cookies, chocolate cookies) and the other half were not. The result? The cookie crew ranked the teachers, materials and course overall more highly. This is obviously not the reason you get free coffee and biscuits at Resolution events…

Working where? There’s new urgency for organisations where work involves sending emails rather than actually doing something to sort out what “returning to the office” means. Banks want staff to have their nose fully attached to the grindstone maximise the opportunities that office work provides, while tech hippies are permanently relocating their beanbag to the spare room. A short article uses new surveys to confirm that most people want a hybrid model and on average workers would prefer more WFH days than employers (no surprise there). 6 per cent of workers say they’d quit if asked to go back to the office full-time, while 64 per cent of those with kids (vs. 49 per cent of those without) would look more favourably on a job offer that matched their current pay but had more WFH flex. Most interesting is the discussion of how the big variations in workers’ preferences and employers’ approaches might lead to a big “re-sorting” of who works where. No sign of that yet in the UK data but it’s early days.

The Government is relaxing some travel restrictions so the risk takers among you are going to be proved right and get to jet abroad this summer. But most of us are settling in for another staycation summer – and who’s* to say that swapping Ibiza for Anglesey is a downgrade sand-and-sangria-wise? (*everyone). Which areas of the UK will benefit economically? Chart of the Week (courtesy of new RF research) shows that British tourists favour our idyllic wind swept coastline and hilly hotspots – West Wales, Devon, Cornwall and Cumbria. In contrast, our big cities won’t get as much of a look in, because they’re most popular with foreign tourists. The lessons? I’d seriously think about a UK-based city break if you’ve got a spare weekend. And for those residents of rural beauty spots with mixed feelings about urban hordes invading their fiefdoms, it’s time to brace yourselves: Brits took 16 per cent less leave in 2020, so the buggers are going to be able to hang around your neck of the woods all summer. 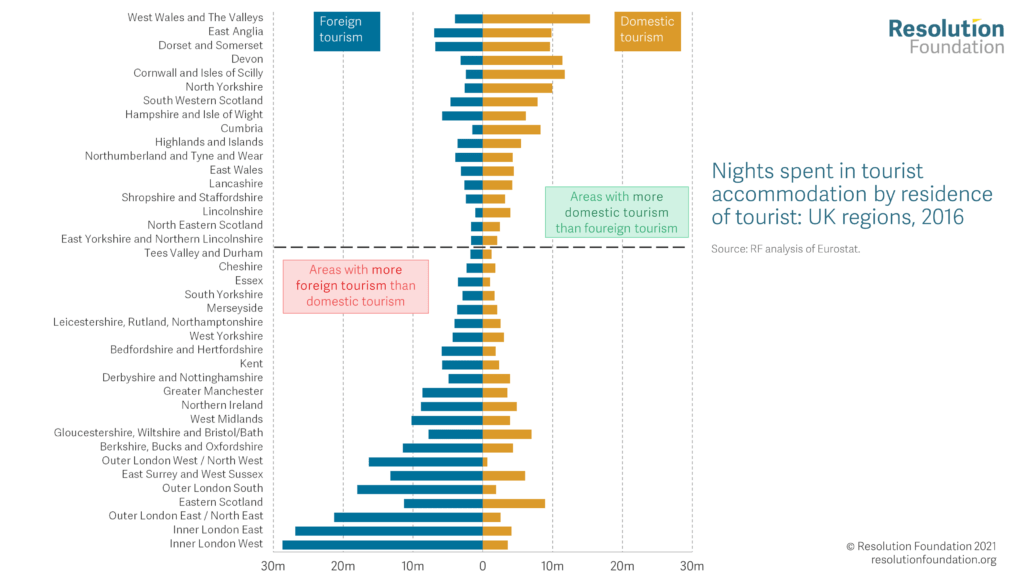