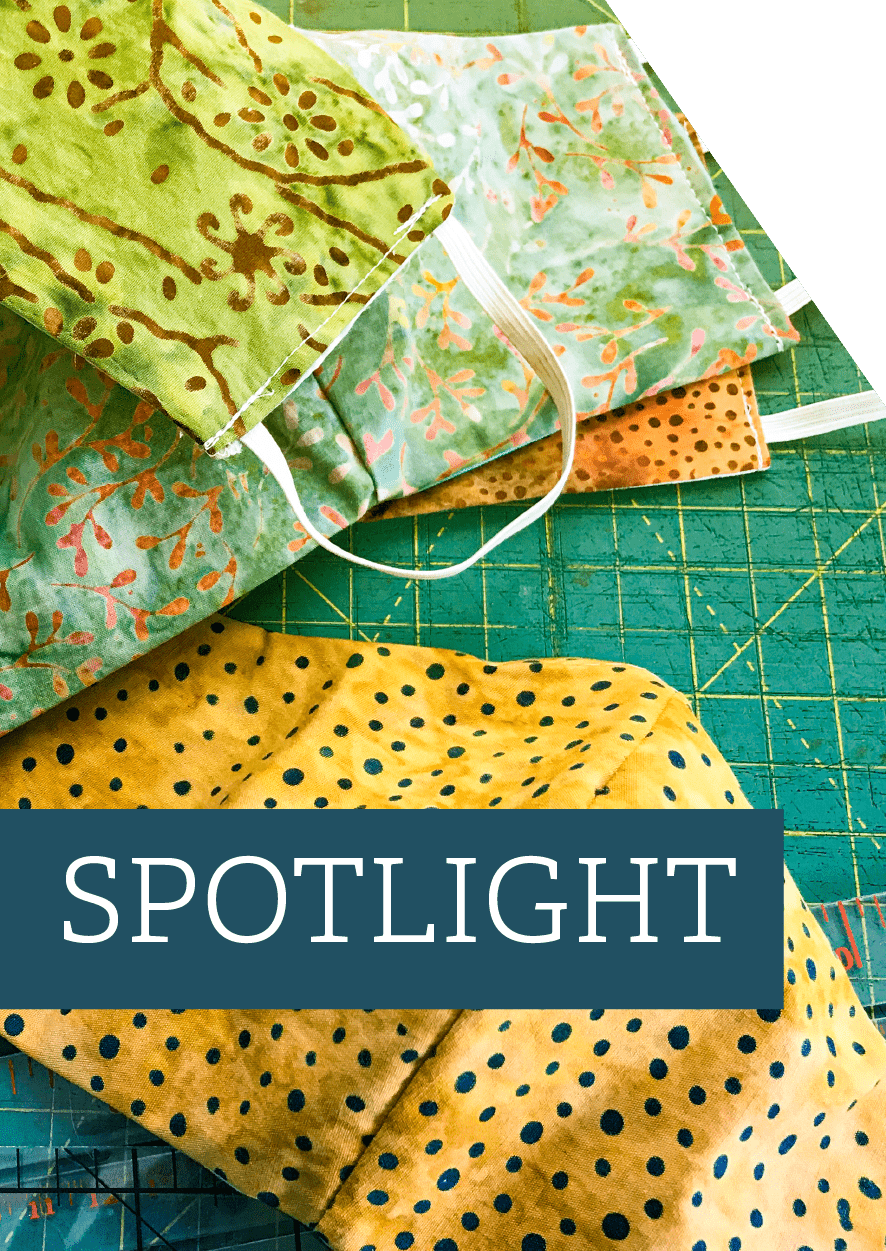 As with last year, many holiday makers will be spending this summer in the UK. So in this Spotlight we look at the implications of another year of ‘staycations’ for the UK’s labour market.

For much of the past 18 months there have been tight restrictions on international travel, leading to a sharp fall in tourism. Throughout 2020, tourist accommodation in the UK was operating at between a third and half of ‘normal’ levels (see Figure 1). Other measures paint a similar picture. Across 2020, the total number of hours worked in visitor accommodation was down 45 per cent on 2019 levels. There were similar falls in other tourism-heavy sectors, such as transport rental (-44 per cent), food and beverage services (-36 per cent), and passenger transport (-30 per cent). These falls compare to the 11 per cent fall in hours worked across the economy as a whole.

Figure 1:  Use of tourist accommodation was around half its normal level last year 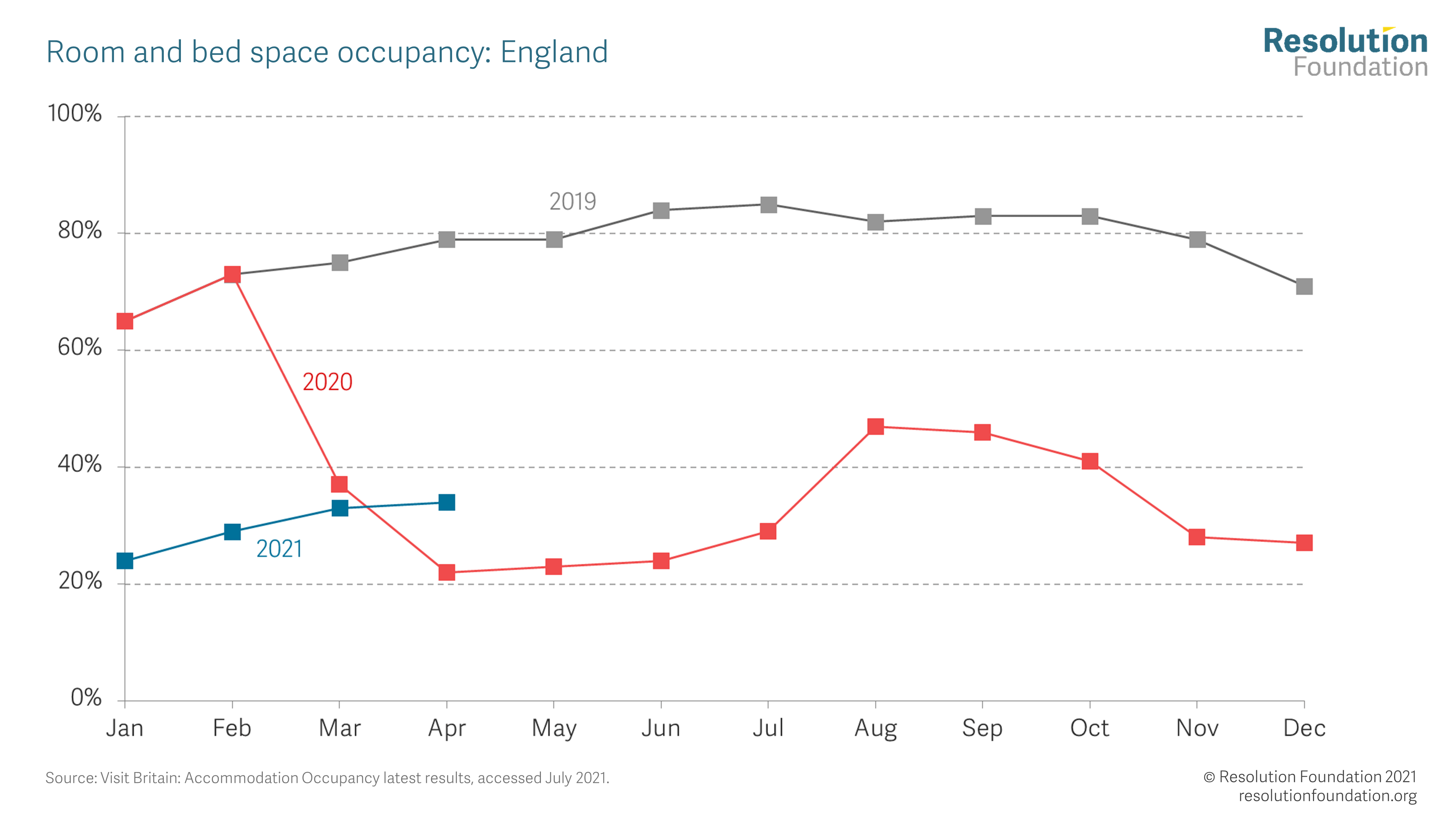 So it’s clear that overall tourism activity is down. But because the restrictions on international travel have for most of the crisis been stricter than those on internal travel, within the overall trend of lower tourism has been a switch away from international and towards domestic tourism. This ‘staycation’ effect can be seen in the pattern of overnight stays in tourist accommodation by nationality of the tourist. In Europe last August, nights spent in tourist accommodation by tourists visiting from another country were 57 per cent down on their 2019 level, compared to 12 per cent down among domestic visitors (see Figure 2). Across Europe, domestic tourism normally accounts for 53 per cent of overall tourist stays; last summer this rose to 70 per cent.

Figure 2: In 2020 most tourism was from people travelling within their own country 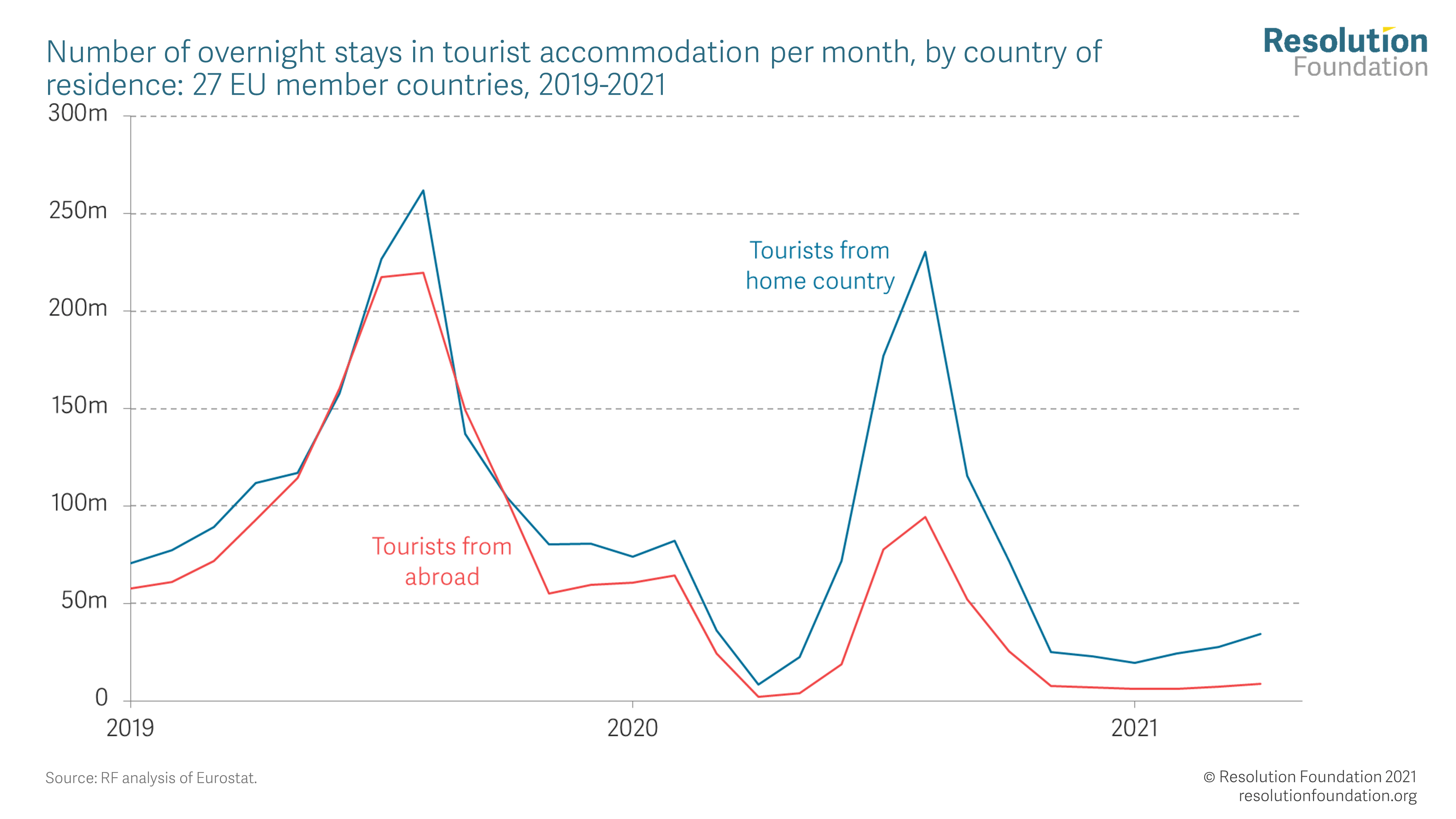 The UK will have benefited more than many other countries from this switch to staycations. Prior to the pandemic, the UK was a net importer of tourism – that is, UK residents spend more abroad than visitors from other countries spend here. In 2019, the ‘tourism trade deficit’ was £30.5 billion.[i] This means that, absent any other changes, if all tourists around the world replaced their foreign holidays with a holiday in their own country, spending on tourism in the UK would increase by £30.5 billion, an increase of around a sixth.[ii] The ONS estimate that the tourism sector employed 1.7 million people in the UK in 2018, so growth of a sixth would imply around 300,000 extra jobs. Countries which are net exporters of tourism (who host more foreign tourists than they send abroad – think countries like Spain and Greece) are in the opposite situation, and will be losing out from the switch to ‘staycations’.

Of course, times are far from ‘normal’, and so – although the UK tourism sector will be benefiting from a switch towards domestic tourism – this is clearly being offset by the the larger ‘stay at home’ effect with an overall reduction in tourism activity. But, although it may not feel like it to those struggling to fill bars and beds in the UK, conditions aren’t actually as bad as they might be thanks to the ‘staycation’ boost.

That said, not all parts of the UK will be benefiting from the relative shift towards staycations. Figure 3 shows how, across the UK, there is a big difference in the extent to which tourism normally comes more from domestic or international tourists. Broadly speaking, coastal and rural areas get more of their tourist activity from domestic tourism, and therefore stand to benefit from the relative switch towards staycations. Cities, on the other hand, get more of their tourism from abroad, and so will be benefiting less. This is particularly the case in London, where, in 2016, 90 per cent of the 123 million nights spent in tourist accommodation was spent by tourists from abroad. By contrast, in West Wales, Devon, Cornwall, and Cumbria (home to the Lake District), foreign tourists accounted for around a fifth of all tourism. These are the places that are likely to be benefiting from the rise in staycations.

Figure 3: Coastal and rural tourist areas will be benefiting from the switch to staycations, while cities, especially London, will be losing out 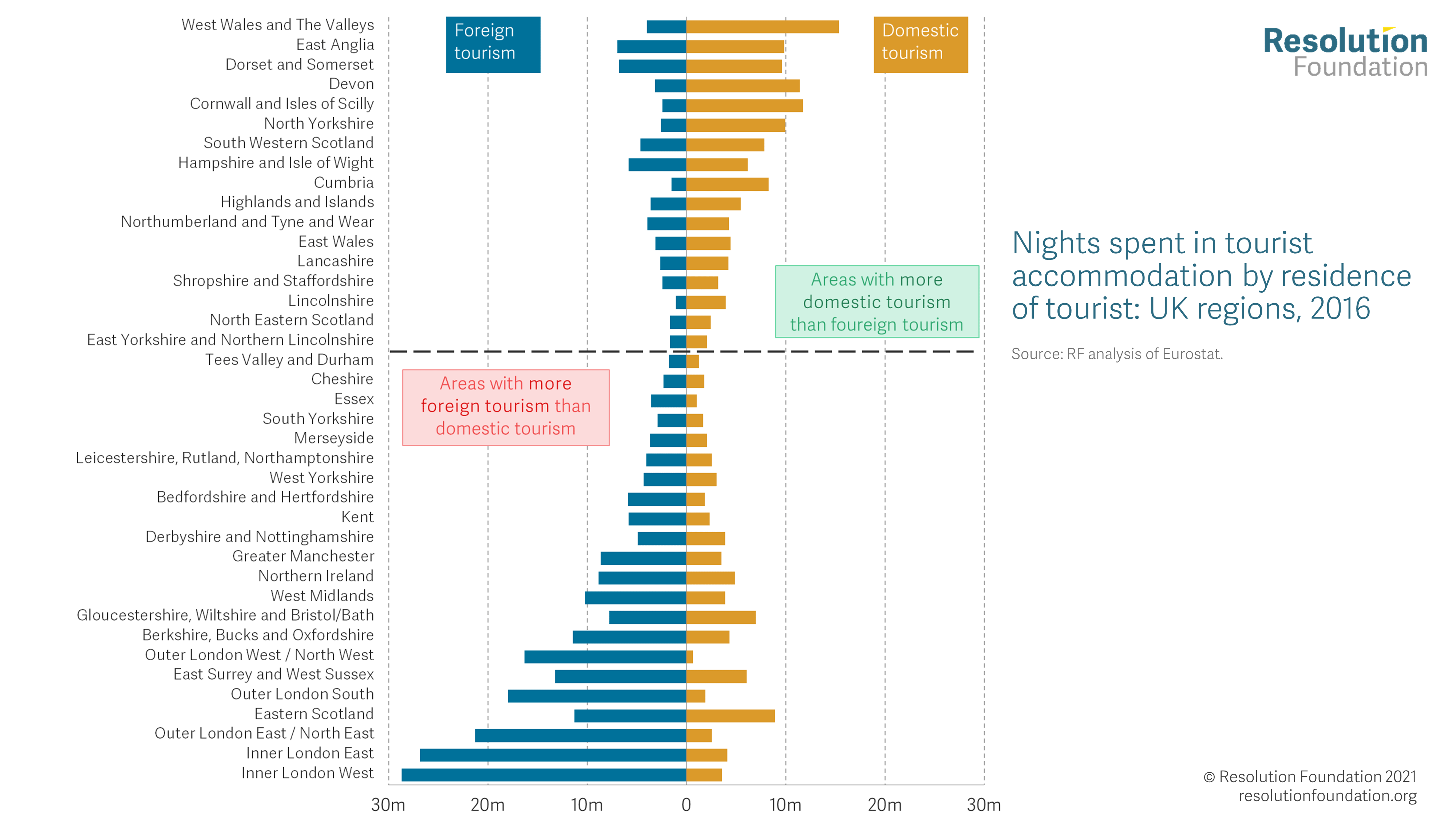 With many restrictions on foreign travel still in place, 2021 is again set to be a year of staycations. This is partly down to the restrictions in place in the countries UK tourists would normally travel to. Figure 4 shows the restrictions on incoming travellers in place in the 25 countries most visited by UK tourists, which collectively account for three-quarters of UK tourism visits. While there are fewer countries with complete border closures than there were in Spring 2020, there are still restrictions in place on in-coming travellers in the majority of these countries. But at least as important are the restrictions that the UK’s has imposed on arrivals from abroad. UK residents returning from countries on the ‘amber list’ have to quarantine for 10 days if they are not fully vaccinated (which includes to 31 per cent of UK adults). This is important because, of the UK’s 25 most-visited countries, all are on the ‘amber’ list apart from Bulgaria and Australia (on the ‘green’ list), Ireland (no restrictions), and Turkey and Pakistan (on the ‘red’ list). 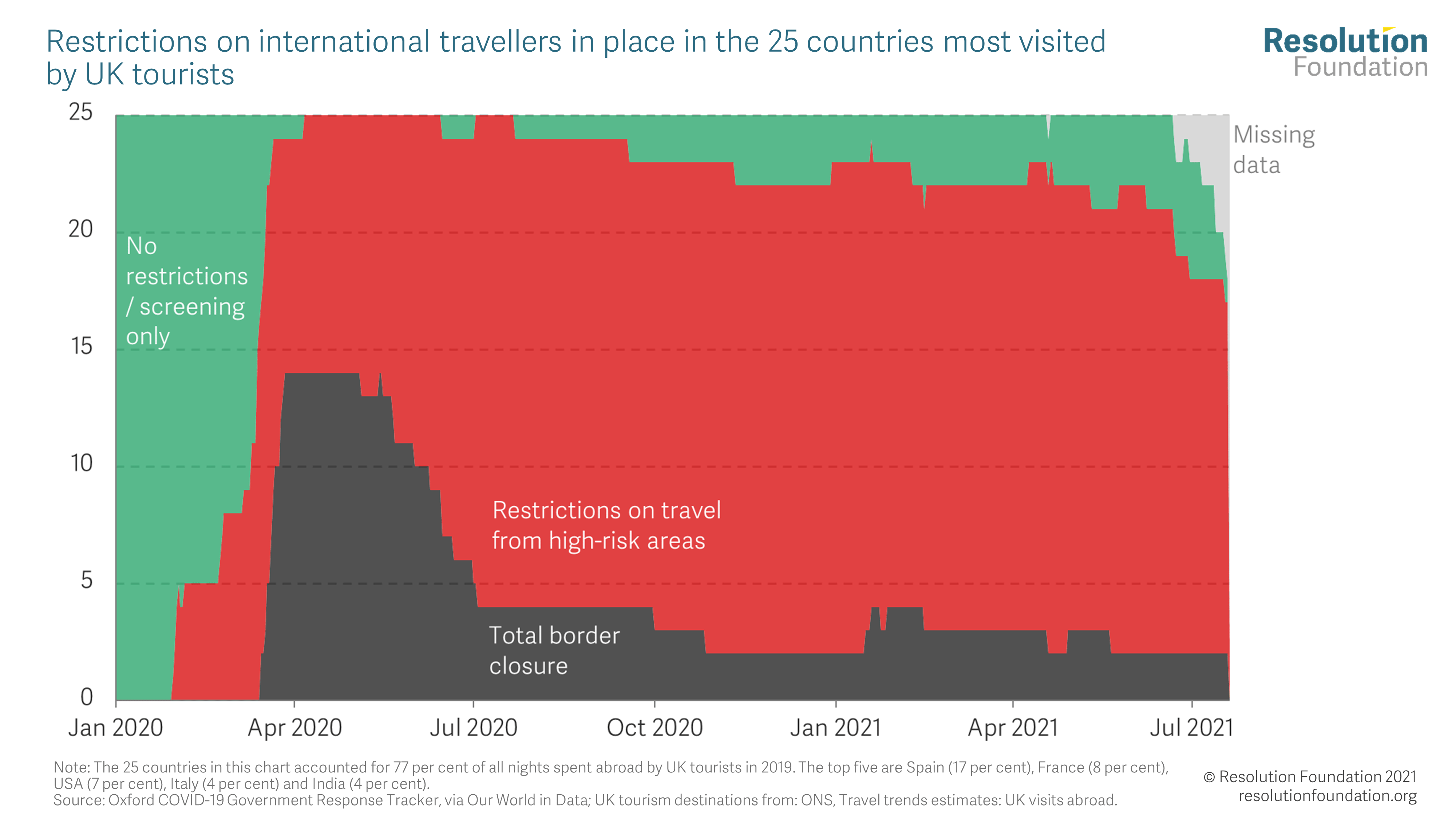 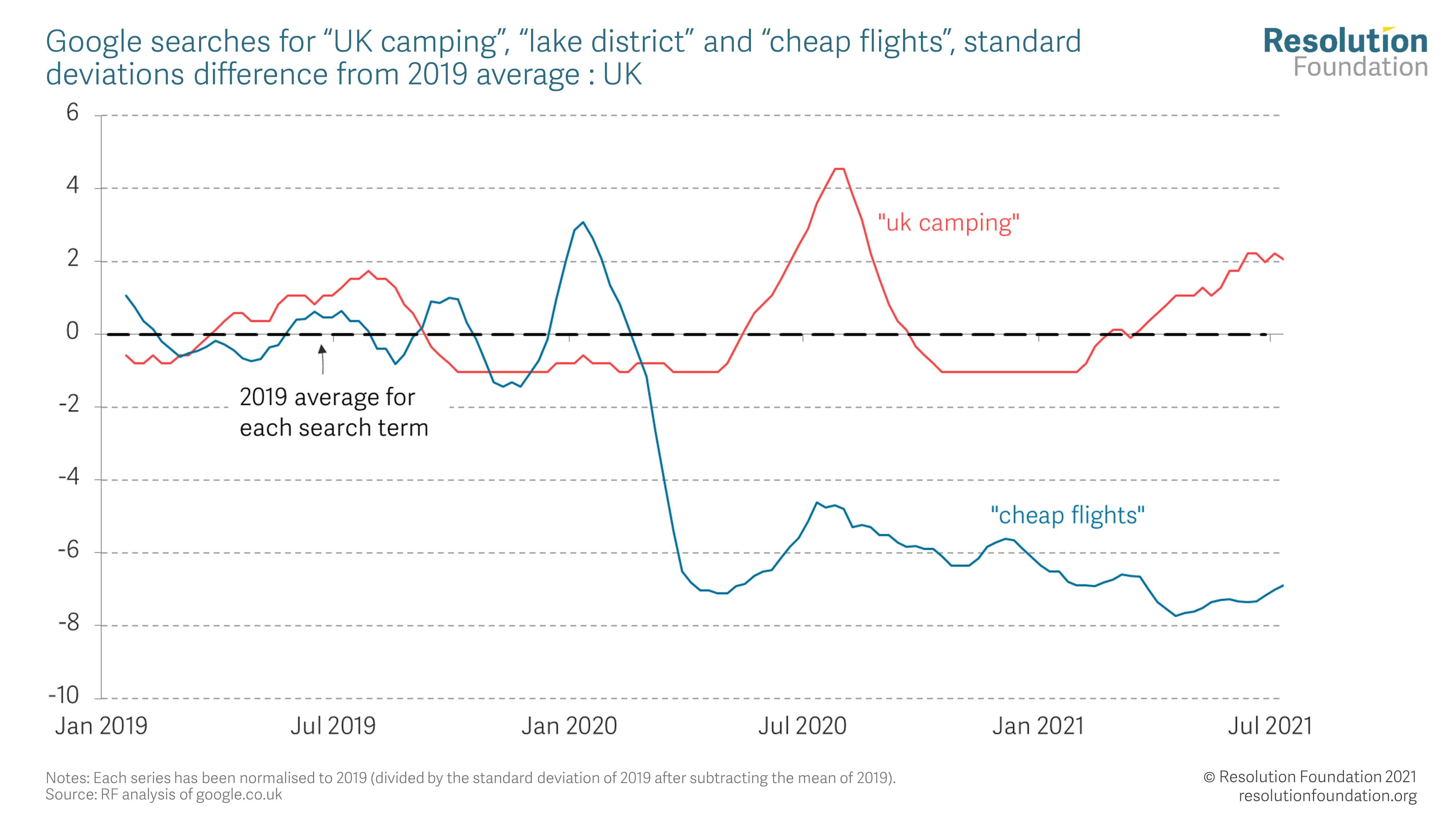 The one bright spot when it comes to the outlook for tourism this summer is the fact that limited travel and leisure options available for much of 2020 appear to have encouraged some workers to carry over some of their leave entitlement, in anticipation of better options this year. A YouGov survey from November last year found that 40 per cent of workers said they had more annual leave left than normal for that time of year. We can use the Labour Force Survey to get a sense of how much leave has been deferred. Figure 6 estimates the number of days’ leave taken by employees in each month of the year, and shows that in every month from April through to October there was less leave taken in 2020 compared to normal years (where the range from years 2015 to 2019 is taken as a measure of a ‘normal’ year). Across the year as a whole, the number of days taken as leave in 2020 was 16 per cent below the average from pre-crisis years (2015 to 2019), which for someone with 25 days’ annual leave entitlement equates to not taking (and hopefully carrying over, rather than losing) four of these days.[iii]

Figure 6:  Many workers will have built up holiday entitlement during 2020 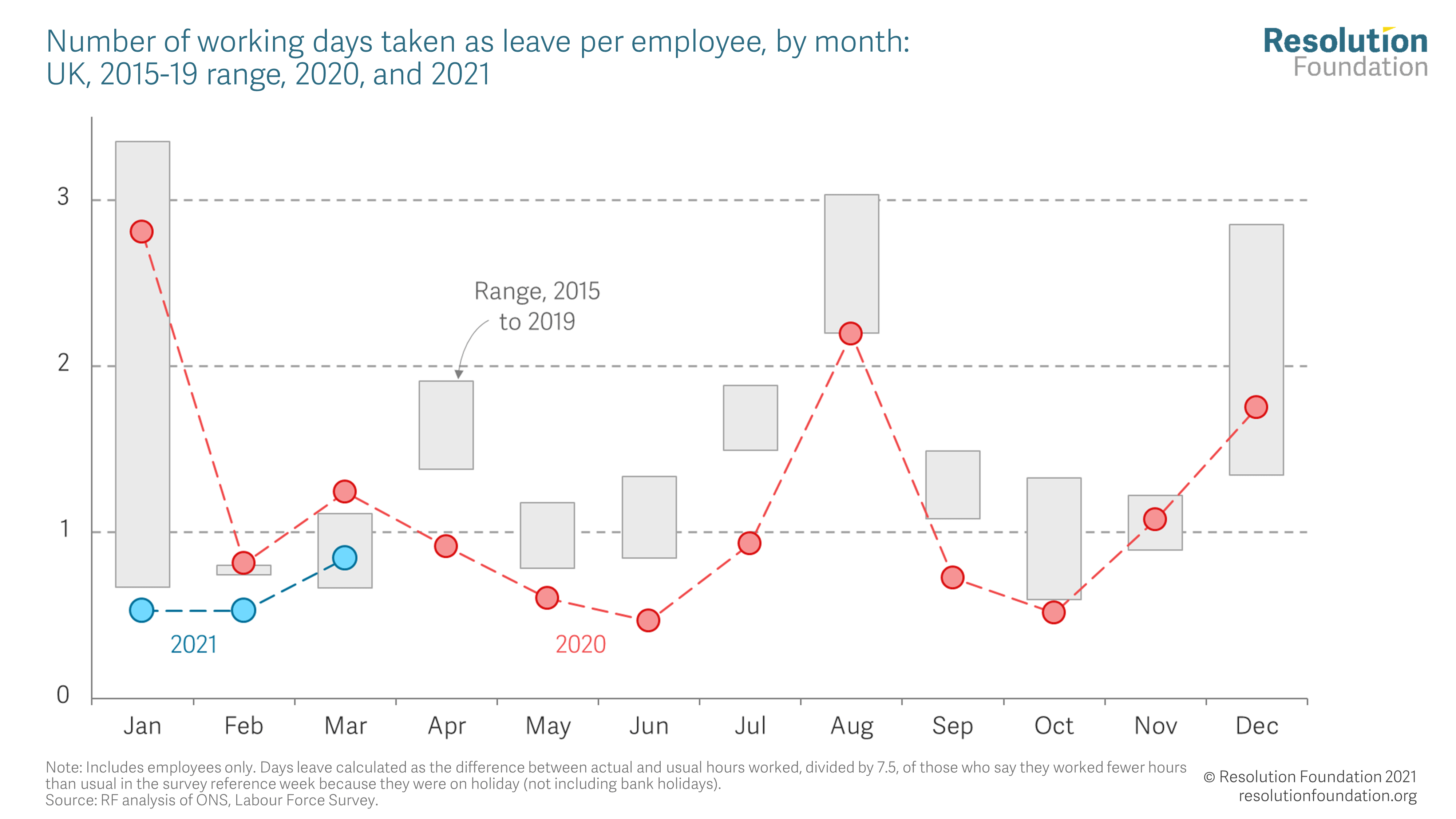 Of course, workers deferring leave in hope of better holiday options in 2021 have so far been disappointed. But most won’t be able to keep adding to their ‘stock’ of leave – employers tend to limit how much leave can be deferred, if they allow such deferrals at all. So even if workers don’t want to draw down their built-up leave reserves they will probably have to take something closer to their normal amount of leave this year, or risk losing it. This means the number of UK residents on holiday this summer might be closer to normal levels than was the case last year.

Despite this, the tourism sector is likely to continue to struggle, even as wider economic activity picks up

However, despite the ‘staycation’ boost, and the potential that workers will take a more ‘normal’ amount of leave this year, the big picture is clearly one of continued difficulty for tourism in the UK. Although vacancies in the tourism sector, as with the wider economy, have returned to pre-crisis levels (see Figure 7), the recovery in activity and employment will be slower than the recovery in hiring. In hospitality, for example, where the recovery in hiring has been even stronger, the number of jobs in June was still 11 per cent below its pre-crisis level, and that fall doesn’t include the many workers still on furlough. 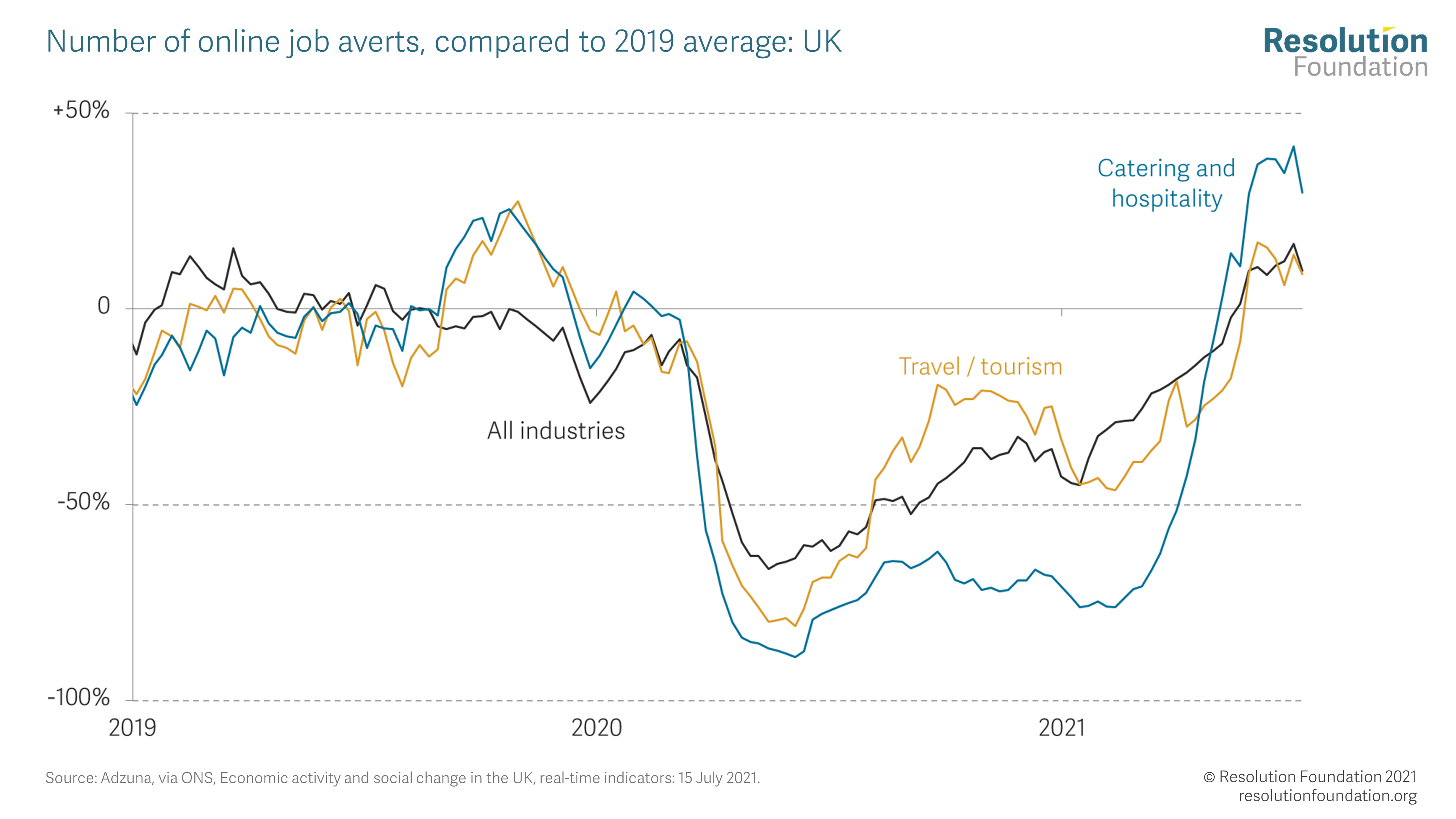 Indeed, the furlough data for hospitality, and tourism more generally, is not encouraging. Despite the reopening of much of the economy, many tourism-heavy sectors remained heavily reliant on the job retention scheme (JRS) in May, particularly those involved in travel (further evidence that it’s international rather than domestic tourism which has been most affected). The proportion of furloughed workers in the passenger transport and travel agency sectors was over 50 per cent at the end of May, a similar proportion to that in the hotel sector (57 per cent at the end of May). But furloughing is falling encouragingly quickly in the latter – down almost a third on the April figure – unlike the transport and travel agency sectors. In a recent blog on the JRS we called these sectors with high and slow-changing rates of furloughing ‘stalling sectors’.

Figure 8: Rates of furloughing are still high in many tourism-heavy sectors, and look set to remain high in those providing travel-related services 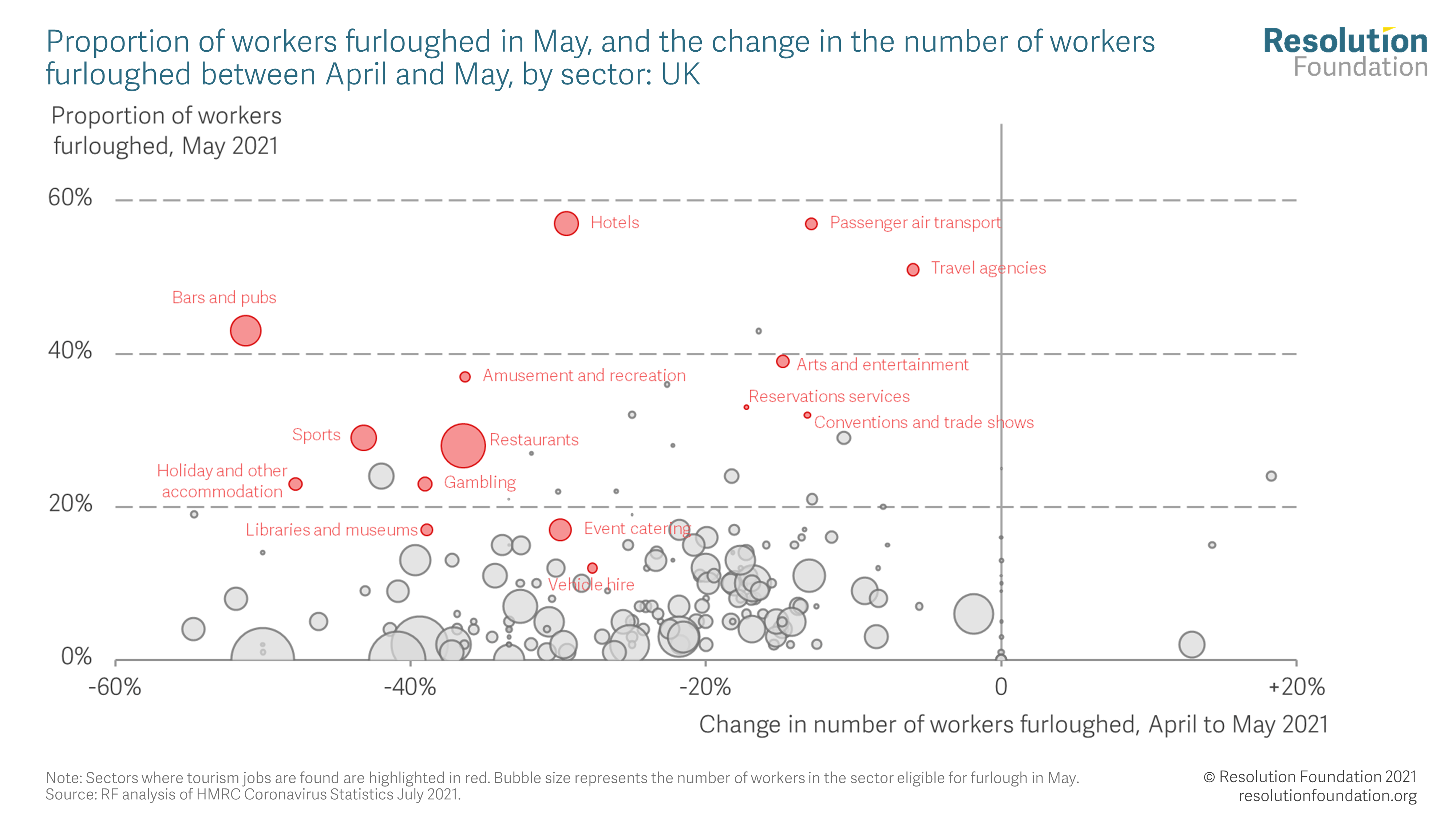 A difficult time for tourism is bad news for young people

Unfortunately, tourism is one of several sectors (like hospitality and leisure) where the impact of this crisis is being felt most by young workers. Before the crisis, tourism accounted for over a tenth of employment for those age 16 to 19, and 6 per cent of employment for those age 20 to 24, compared to 2 to 3 per cent for older age groups. Under-25s account for 1 in 4 jobs in the tourist sector, compared to 1 in 10 jobs in the rest of the economy. The impact of the crisis on young workers has been one of the most significant features of the Covid-19 crisis. The number of employee jobs held by workers under the age of 25 was, as of May, still 5.1 per cent below its pre-crisis level, compared to -0.7 per cent among all age groups. Given the prospects for tourism remain weak, young people in tourist hotspots who might normally rely on jobs associated with tourism might continue to struggle during the recovery. With ongoing weakness in tourism and other youth-focused sectors (such as hospitality more broadly) it’s vital the Government makes a success of its Kickstart programme, which is providing subsidised jobs for young people.

Figure 9: Tourism is an important source of jobs for young people 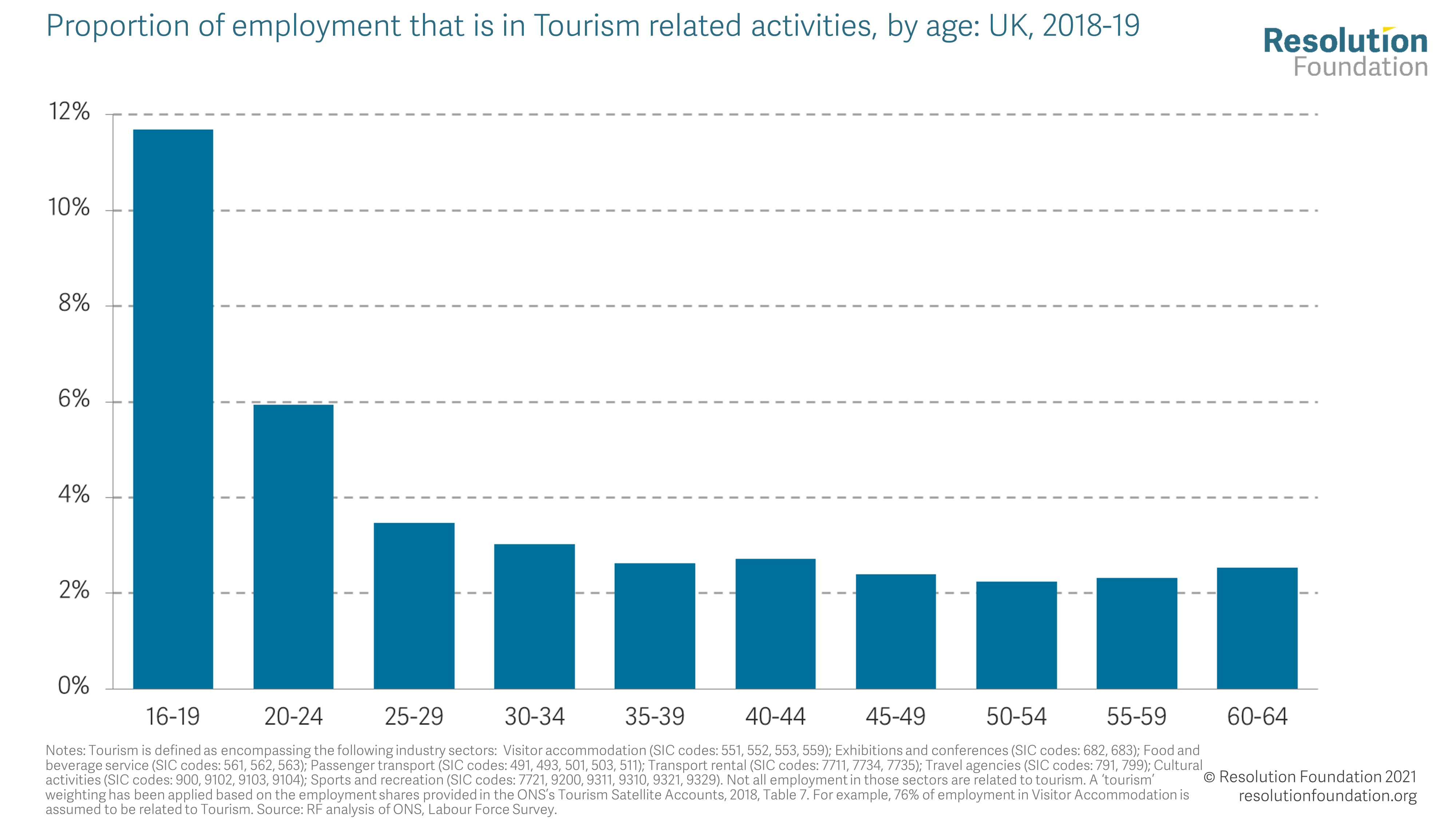 This summer, like last year’s, will see many switch their foreign holidays for holidays in the UK. Such ‘staycations’ will benefit UK tourism more than in other countries, and the rural and coastal parts of the UK in particular. The bigger picture, though, is that the relative rise in domestic tourism is smaller than the overall fall, and so the sector will continue to struggle. This is bad news for those parts of the country reliant on tourism, and for those (in particular the young) who rely on the sector for work. The fact that so many workers in tourism remain on furlough (along with the broader hospitality sector) reminds us that the labour market challenges associated with this crisis aren’t over yet.

[i] This refers to the trade balance in travel which is not for education and health reasons. See row 48 in tab 3.3 in the latest ‘pink book’ dataset.

[iii] 4 days out of 25 represents the average. Of course, some workers will have taken all their leave, and some will have left many more days than this unused. The Government amended the working-time regulations in 2020 to allow more leave to be carried over. Normally workers have to take at least four weeks of the 5.6 weeks statutory entitlement (which includes bank holidays) within the year and may carry over up to 1.6 weeks. The amendment in 2020 gives workers the right to carry over up to four weeks into 2021 and 2022, if they were not able to use their leave in 2020.