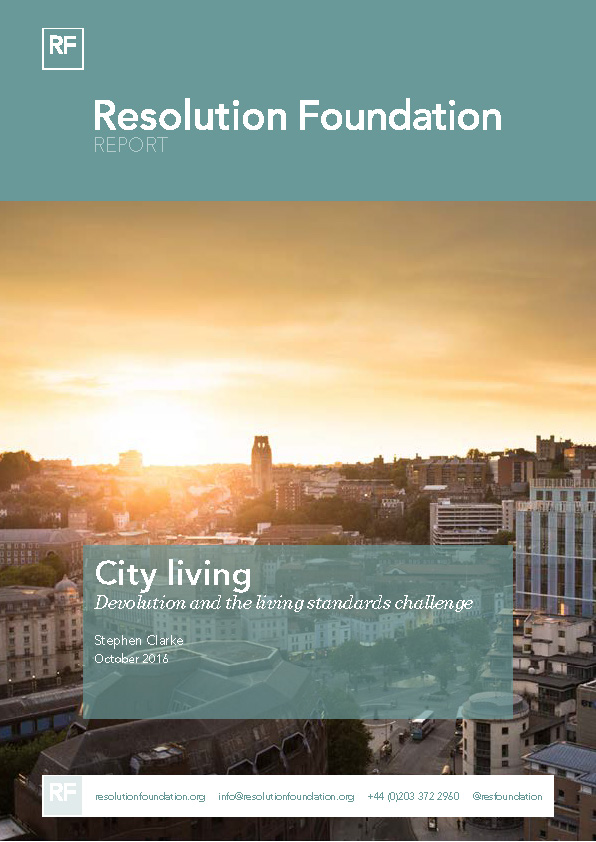 Significant devolution is planned for Britain’s major city regions. The powers that may soon be devolved are, in terms of recent history if not international comparisons, unprecedented in scope. In May 2017 some cities will elect a region-wide Mayor which will provide fresh political impetus. Furthermore, Theresa May’s new government has signalled her support for devolution, suggesting that further powers could be devolved in the relatively near future.

However, devolution will not be judged on what powers are handed down but by the degree to which city mayors and other local leaders improve the lives of their populations. In this respect Britain’s cities face significant challenges. The country is somewhat of an outlier internationally, with living standards in most of Britain’s major cities lower than in the rest of the country, with big variations in how inclusive prosperity in different cities is. Employment, earnings, and income are lower and yet residents of many cities face high and rising housing costs – the result is a significant squeeze on living standards in Britain’s cities. It is the combination of these political and economic developments that is the impetus for the Resolution Foundation’s investigation into living standards across Britain’s major city regions.

This paper marks the first publication in this investigation and focuses at the labour market performance of Britain’s cities. Significant powers over employment support are being devolved and further powers could follow. Furthermore boosting employment is very progressive way of improving living standards as the people that move into work are usually those lower down the income distribution. Tight labour markets also feed into pay rises.

Despite the impressive employment performance of the British economy since 2011 we find that employment rates tend to be lower in Britain’s cities, although this masks significant variation between them. Furthermore, variations within cities are larger than differences between them, posing a big challenge for the inclusive growth many prospective mayors say they wish to see. Looking into these differences we find that the variations in performance across and within cities is largely explained by the differences in the employment rates of ‘low activity’ groups, including younger adults, older people, the low-qualified, mothers, single parents, disabled people, and black, Asian and minority ethnic (BAME) people.

Addressing within or between-city differences would provide a large boost to employment, though we find that narrowing the gaps within cities would provide the bigger pay-off – an increase of around 750,000 more people in work last year. However, different cities should be pursuing different strategies and focusing on different groups, depending on the specific challenges in each city. A proper debate about what those challenges are in each city is an essential pre-requisite to the objective devolution was meant to deliver in the first place – better tailored policy and local economic leadership to see it is delivered.