Usually in the Earnings Outlook we summarise the latest developments in pay and employment and use these to look forwards, with the trends moving slowly enough that the lag in our data is not too much of a problem. But with so much having changed so quickly, our normal indicators now serve as a guide to where we were, not where we are or where we’re headed.

The first data we do have of what’s to come suggest difficult times ahead. In the UK and the US, unemployment-related benefit claims have soared, while industry data show a collapse in demand in several sectors, and the business Purchasing Managers’ Index (PMI) for mid-March suggests a severe contraction. We won’t have a clear picture of the effects on the labour market for some time yet; the Labour Force Survey has a two-month lag from data collection to publication, for example. Because there is still so much we don’t know about the coming downturn, other than that it’s likely to be big, we suggest in our Spotlight article that pressing ahead with a minimum wage uprating next week is risky, and that it would be advisable to delay this uprating until the autumn.

Spotlight: How should minimum wage policy respond to the current economic crisis?

The Government’s economic policy response to the virus outbreak is focused on reducing firm’s short-term costs, to aid firm survival, and subsidising the pay of furloughed workers, to keep workers attached to firms and to limit the inevitable increase in unemployment. At the same time, the National Living Wage (NLW – the legal hourly wage floor for those aged 25 and above) is due to rise by 6 per cent next week, to £8.72. This will increase firms’ costs, and risks undermining those policies. There is a good case for delaying the minimum wage increase until October, when we’ll know more about the scale and shape of the downturn and the appropriate minimum wage response.

The central reason is that increasing the minimum wage in a downturn makes low-paid workers more vulnerable to unemployment, by making them relatively more expensive to employers looking to cut costs. And we should be in no doubt about the scale of the downturn that is coming. The history of past pandemics suggest we can expect a fall in GDP of the high single or double digits, and what data we have so far backs up this grim picture – there have been nearly half a million new Universal Credit claims in the past nine days, more than the number of Jobseeker’s Allowance awards started in any single month during the financial crisis.

Moreover, some minimum-wage-paying sectors will be (and have already been) particularly affected by the current crisis. For example, hospitality, where most businesses have been forced to shut their doors, employs around a fifth of all minimum wage workers. An increase in the minimum wage now would increase costs for those businesses.  The retention scheme will help, of course – firms should be able to ‘furlough’ their staff instead of letting them go. But in those sectors where it’s possible, it’s preferable that firms keep staff working rather than furloughed, and a higher NLW might tip some firms over that line.

What about the reasons to go ahead with the uprating? First, there are practical considerations. Delaying the uprating would require primary legislation, and Parliament has stopped sitting. And with the increase just days away, it would be difficult to expect employers to change their pay setting at short notice (although giving some the flexibility to row back in coming months would still provide welcome flexibility). In short, although we suggest a delay, we acknowledge the very real practical challenges around this for both Government and firms.

More importantly, of course, going ahead with the uprating would be good for workers whose jobs are not at threat, not least the ‘key workers’ on whom the country now depends. Figure 1, shows that there are substantial numbers of key workers that are paid at or near the NLW, and who would directly benefit from uprating. For example, more than a fifth of workers in general retail (which covers supermarkets) – 200,000 workers – were paid within 20p of the minimum wage last year, along with similarly big proportions of those working in social care, food production, pharmacies and doctor’s surgeries. It seems unfair to deny those workers a pay rise – demand for their services is going to increase in the crisis (several supermarkets have already announced hiring sprees) and their employers are unlikely to have cash flow problems. Therefore, even if delaying the NLW rise is the right thing to do, the message to supermarkets and other employers of key workers is that they should go ahead with the planned increase. This is particularly the case in the public sector, where there is no argument that any planned increases must go ahead.

Figure 1: There are many ‘key workers’ paid at or near the NLW who would benefit from uprating 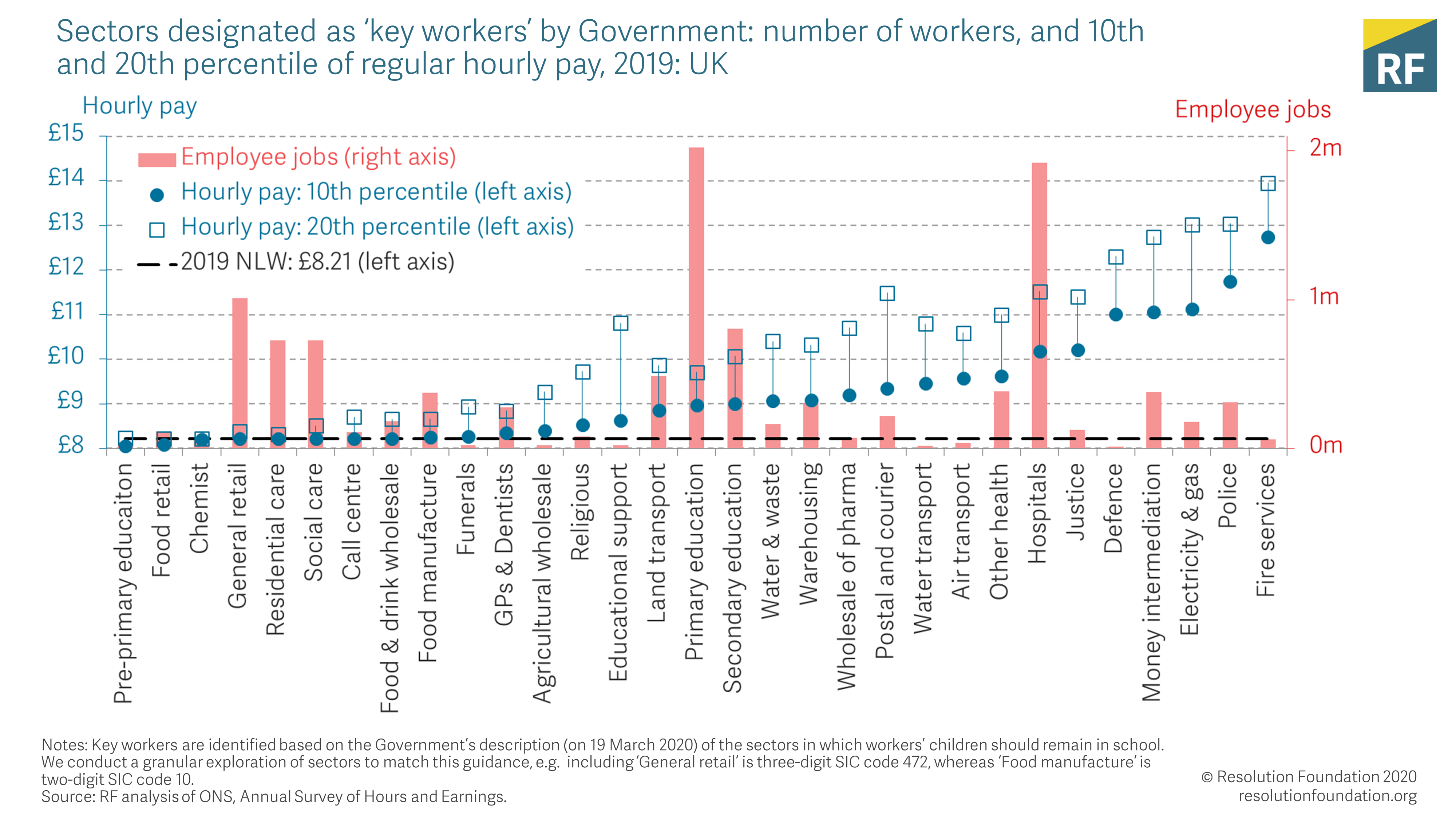 It has been suggested that the newly generous Universal Credit (UC) system will make up for an NLW freeze, but we should note that this won’t be true for all workers. Working households without children won’t have benefited from the recent increase in generosity because they aren’t (typically) eligible, so for them a freeze translates into a straightforward loss of expected income (of £660 per year for a single person, and £1,350 for a couple, if working full time). For working families with children, the recent UC reforms do compensate for a freeze. A single parent working full-time on the minimum wage would still be almost £800 per year better off from the combination of UC reforms and the NLW freeze than if there had been no changes to UC and if the NLW uprating went ahead. A working couple (one working full-time, one part-time) with two children would be £600 better off. This is set out in Figure 2.

Figure 2: Many families with children would be better off in a scenario with changes to UC in place but no NLW uprating, compared to uprating the NLW without changes to UC 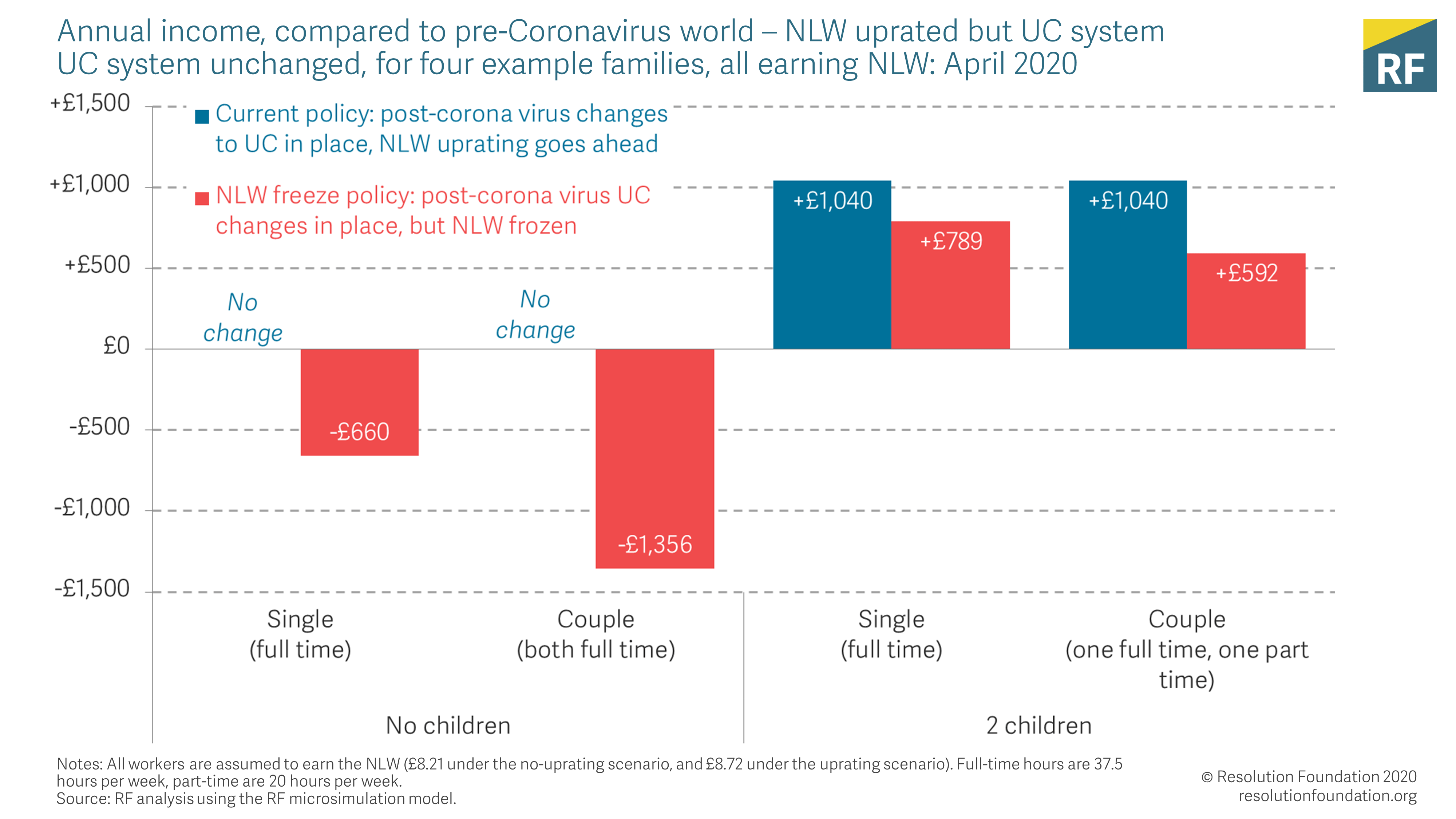 Unfortunately, we can’t rely on the minimum wage being so benign this time round. First, we’re talking about raising the minimum wage relative to average pay; in the last recession the ‘bite’ was held steady. The bite was already on course to rise next month to 60.9 per cent (from 59.5 per cent last year), but with wage growth likely to be lower than expected the bite could increase by more. For example, zero year-on-year wage growth next month (possible if firms cancel this year’s pay increases) would see the bite jump to 63 per cent (see Figure 3).

Figure 3: Uprating next month may sharply lift the ‘bite’ of the National Living Wage, at the wrong time 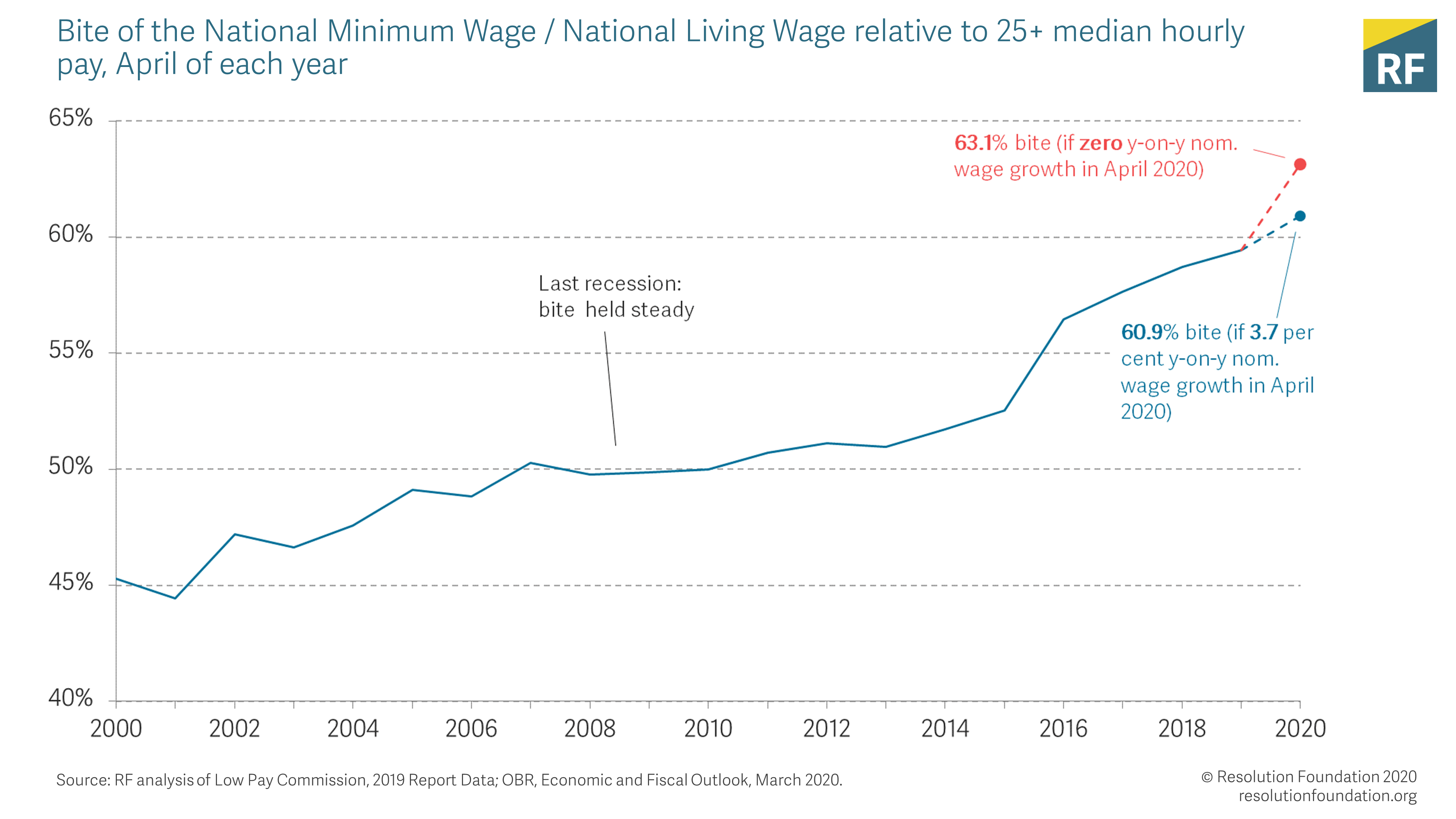 Second, we head into the downturn with the minimum wage at a higher level (covering twice as many workers), and on the back of fast increases (2009, by contrast, followed two cautious years of uprating). Employers might therefore have less capacity now to make non-labour-demand-reducing adjustments than they did a decade ago. A third difference is that in the late-2000s recession minimum wage increases were tempered by higher-than-expected inflation, driven by a falling pound. We can’t rely on that again. Yes, the pound has been falling, but there’s a lag from exchange rates to inflation, so this won’t have much bearing on next week’s uprating.

Overall, there appears to be a good case for delaying the planned uprating, perhaps until October when we’ll have a clearer picture of the state of the labour market and can set policy accordingly (moving the regular uprating date from April would also have technical merits related to data collection, as the recent Dube review of minimum wages pointed out). But even if it’s the right move, let’s not ignore the fact that a delay would be bad news for many workers’ pay packets, not least the key workers whose value to society has been thrown into such sharp relief. Employers of those workers – especially public sector organisations – should go ahead with the increase regardless.