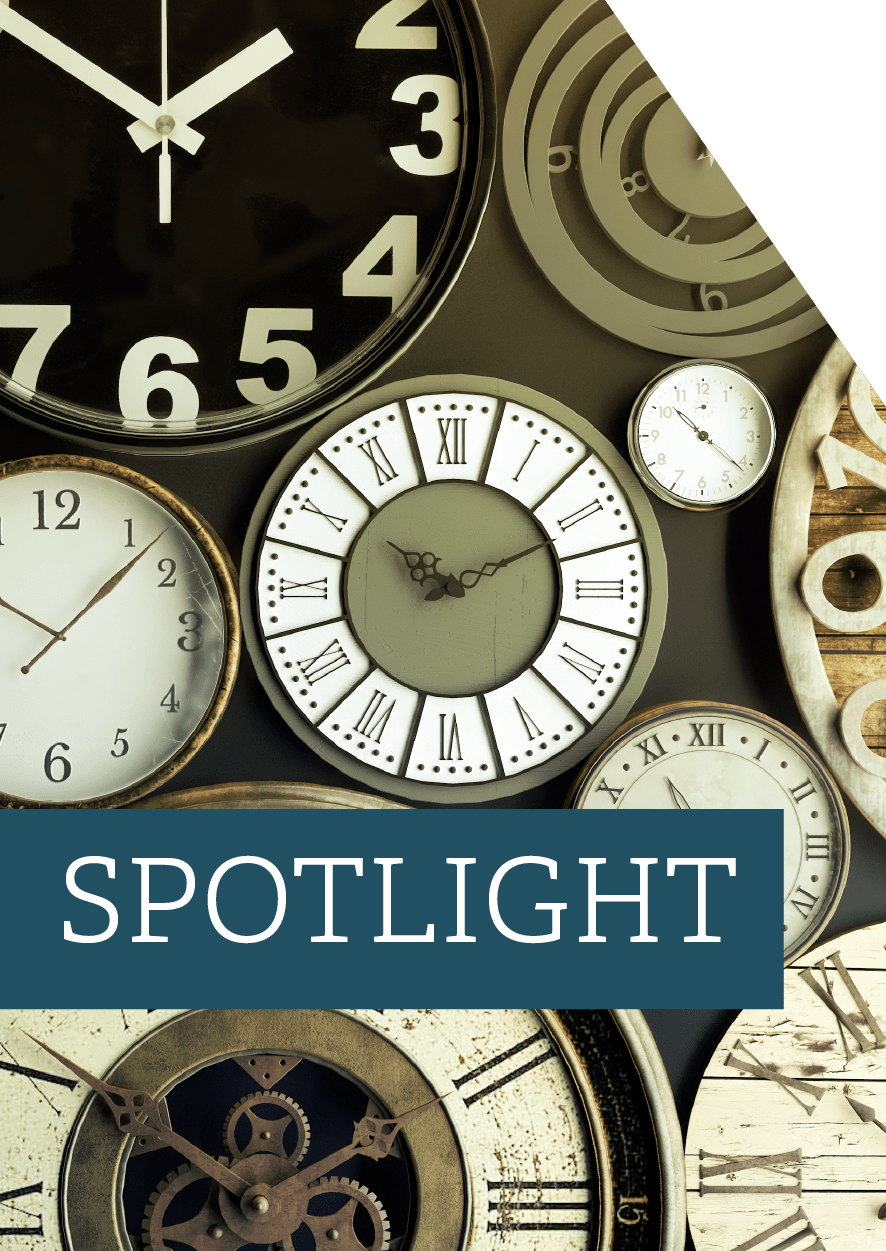 The furlough scheme is less than 90 days from closing down, with 1 July 2021 marking the beginning of its wind-down now that employers are contributing 10 per cent of furloughed employees’ wages. This short note looks at which sectors, people and places are currently more likely to be using the scheme and what this implies for the unemployment risk when the scheme comes to an end on 30 September 2021.

Although furlough take-up declined by one-third (over 1 million jobs) in May, this did not happen in a uniform way across the economy. Furlough rates plummeted by 45 per cent in pubs & bars. But there were still 400,000 people furloughed in ‘stalling’ sectors on 31 May 2021, parts of the economy in which furlough take-up is twice as high as average and where the fall in furlough over the month was lower than average. These sectors include hotels, passenger air transport and creative activities, for example. It is people working in these industries for whom the unemployment risks come September are relatively high.

The easing of restrictions across the country in recent months has triggered a substantial decline in furlough take-up, with 2.4 million people furloughed across the UK on 31 May 2021, down from a peak of 5 million in January 2021. In May alone the number of people furloughed fell by one-third (over 1 million).

Opening up has also led to the share of people on furlough that are furloughed in full (as opposed to partial furlough, where they do some work for their employer) declining to 52 per cent in late May, down from 72 per cent in February 2021. That more of those who are furloughed are doing at least some work for their employer, and that overall take-up is now at its lowest level since the scheme began (Figure 1), is good news and shows that the scheme is working as planned. Although the number on furlough in late-May is higher than other estimates had suggested, the overall picture is of a policy that has protected millions of jobs and supported millions of households’ living standards during this crisis. 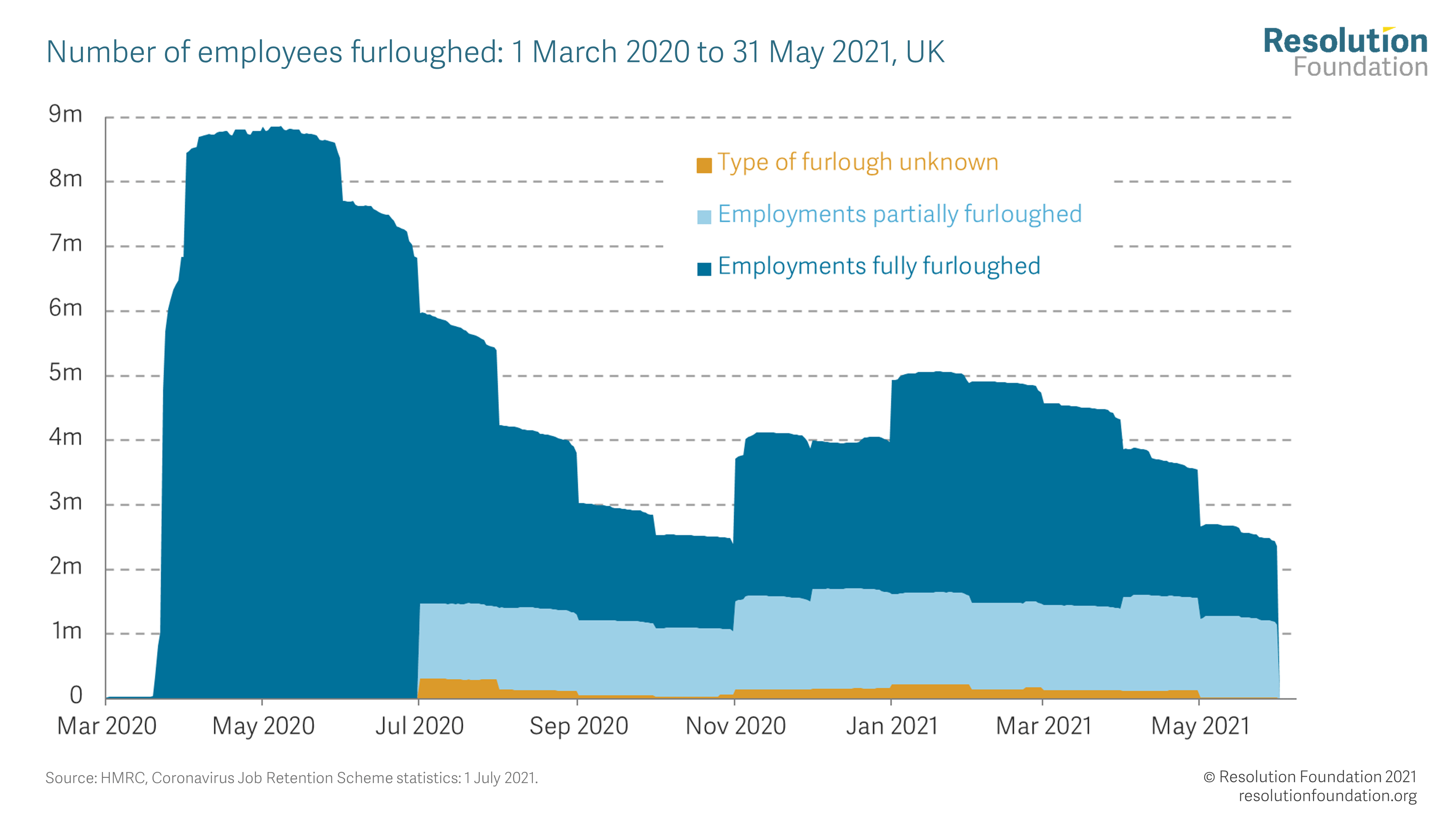 Furlough rates fell rapidly in some parts of hospitality and leisure in May, but remain elevated in some ‘stalling’ sectors

But recent positive news does not mean that the risk of unemployment when the scheme ends is now so low as to be of little concern – far from it. Those 2.4 million people are still one-in-twelve of all employees, and the reduction in furlough rates has not been the same across the economy. Some employees in certain sectors are more at risk than others.

There is some concern that the delay in lifting of all restrictions into July will lead to sharp rises in unemployment in some sectors as a result of the introduction of 10 per cent employer contributions from 1 July 2021. But it is worth noting that employers have been contributing towards the costs of furloughed employees for much of this crisis, in the form of employer National Insurance and pension contributions.  In general, the trends in furlough usage to-date suggest that it is not employer contributions that cause big changes in take-up, but changes in the restrictions on economic activities.

The real concern is not what happens over the next two weeks, but what happens when the scheme ends in full on 30 September 2021. We can look at what happened in May – the month of the ‘great unlocking’ – and the position of different sectors at the end of this crucial month to form a view as to which sectors to focus on when considering the unemployment risk.

There are some sectors in which a high number of people were furloughed in late-May and where furlough rates also fell dramatically over the month (see Figure 2). Pubs & bars is a prime example: furlough usage was still high at 43 per cent of eligible employees (170,000) on 31 May 2021, but it fell by 140,000 in May (a reduction of 45 per cent). And as restrictions ease further in the coming weeks it is likely that this number will fall further.

Some of these ‘stalling’ sectors are highlighted in the top-right corner of Figure 2. These include parts of the travel and creative industries, from hotels (in which 135,000 people were furloughed), passenger air transport (33,000) and travel agencies (30,000) to creative activities (25,000) and film & TV (21,000). A further 600,000 people are furloughed in other sectors where rates are higher than average (above 8 per cent) and where the pace of reduction in furlough over the course of May was smaller than average.

Figure 2: Furlough rates fell rapidly in some sectors but are stuck at high levels in others, particularly travel and creative sectors 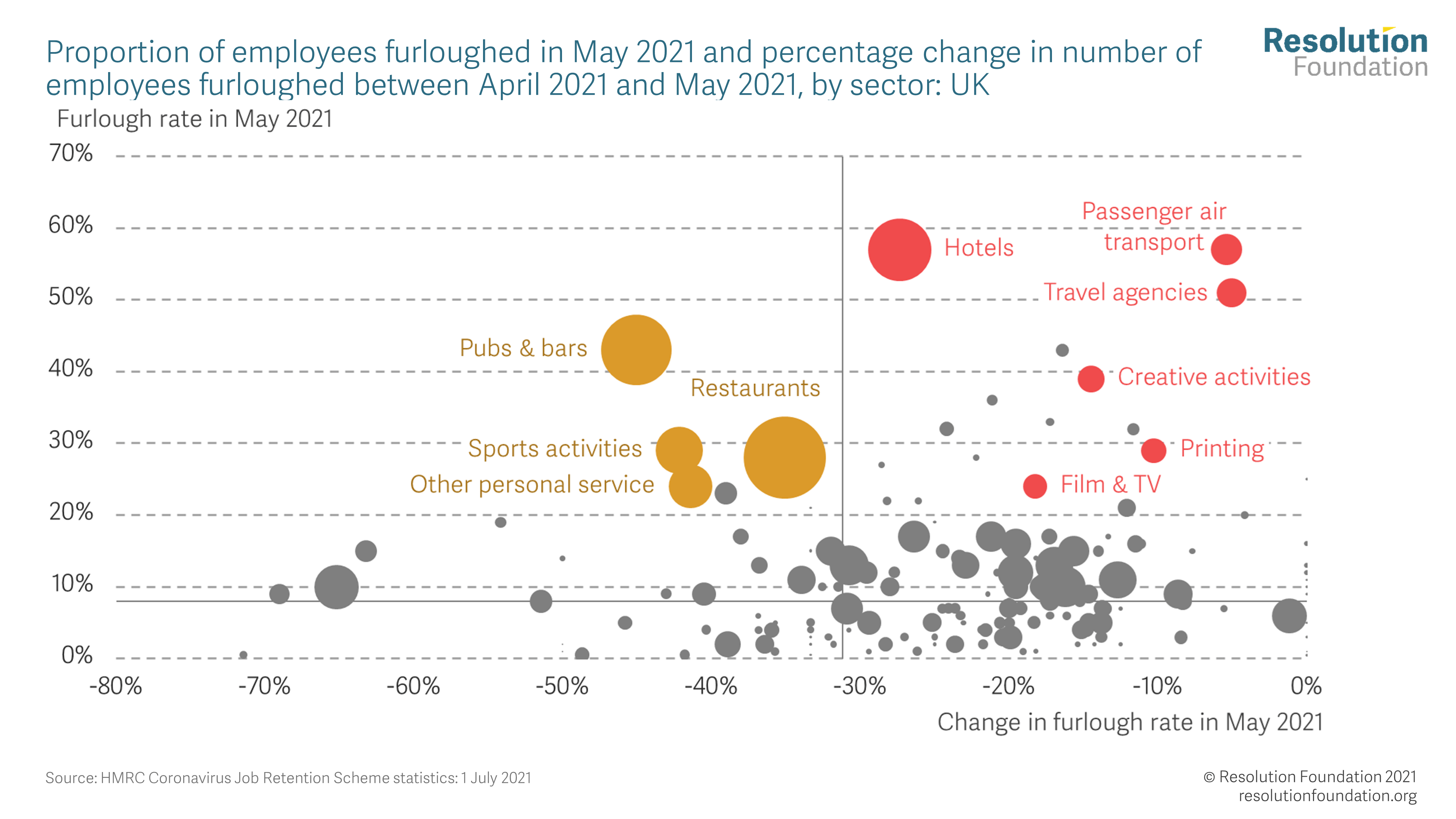 If restrictions on activity in these kinds of sectors persist into the Autumn, for example, as a result of a continued restrictions on international travel, then there will be a case for targeted sectoral support. At the moment, the case for extending the furlough scheme as a whole beyond September (or pulling it sooner) is not convincing: the scheme cannot last forever, but nor should it be shut early as a result of a misreading of the trends in our pandemic-dominated labour market.

As we move towards the end of the furlough scheme, and the sectoral mix of take-up changes, we can also see changes in the composition of the group of employees who are furloughed. As hospitality opened up in May, with a 400,000 reduction in furlough usage, younger workers left furlough in droves, collapsing the stark age differences in take-up rates that have persisted throughout the pandemic. Whereas 18-24-year-olds were around 60 per cent more likely to be furloughed than those in their 40s and 50s in February 2021, this difference had declined to just 25 per cent by May.  As Figure 3 also shows, furlough rates among under-18s are now on a par with those among over 65s, having been twice as high in February. 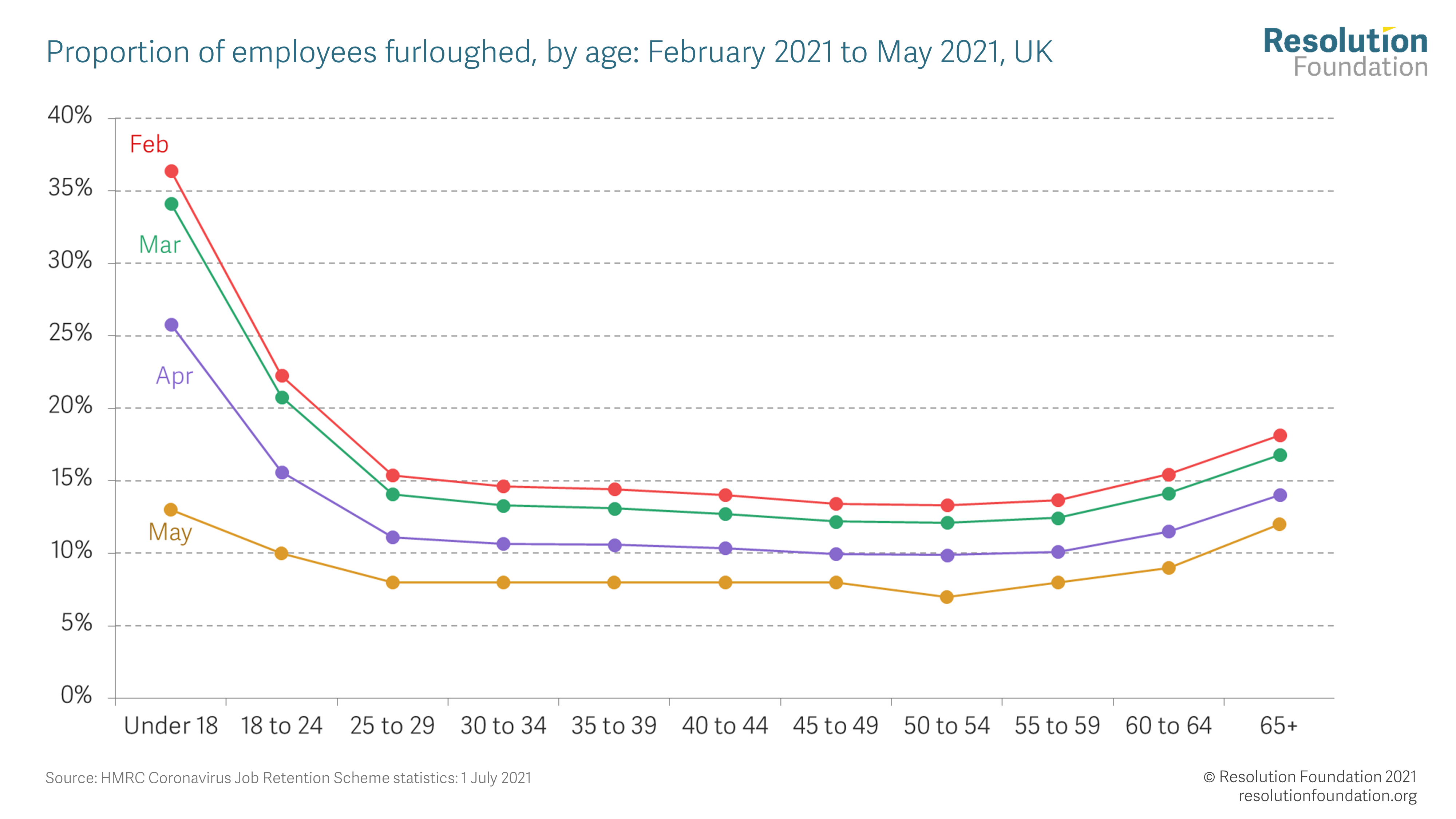 Alongside the new administrative data on furlough, new survey evidence presented by Resolution Foundation earlier this week showed that, among the million workers left on furlough in May, workers aged 18-34-years were more likely to have been furloughed from jobs in hospitality and other sectors heavily-affected by Covid-19 restrictions than older workers. Among those aged 45 and over and still on furlough in May 2021, 53 per cent come from the non-heavily-affected sectors, compared with 37 per cent of their 18-34-year-old counterparts. And we should be concerned that older workers still on furlough in May 2021 were at a much higher risk of being so for a long time: we estimated earlier this week that 69 per cent of furloughed or unemployed workers aged 55-64-years in May had been so for at least consecutive six months, compared to 38 per cent of those aged 18-24-years. That translates to 270,000 55-64-year-olds who have been fully furloughed or unemployed for six months or more, and 619,000 45-64-year-olds as a whole. Overall, this evidence is suggestive that, as the crisis abates, it is those young people still on furlough now who are more likely to return to work, while those older workers who remain furloughed more likely to be part of a residualised left-behind group.

Although the May opening-up has had a big impact on furlough take-up by age, the geographical patterns of furlough usage have persisted (see Figure 4). Throughout much of this crisis furlough usage has been highest in the Lake District and in North London boroughs. But South Lakeland has now slipped out of the top 10 highest-furlough local authorities (down to number 11), and the top 10 is now comprised of 9 North London boroughs (Newham, Hounslow, Brent, Haringey, Barnet, Ealing, Redbridge, Waltham Forest and Enfield) plus Crawley, which contains Gatwick airport. It seems to be the case that this is driven predominantly by high numbers of residents of these boroughs working in industries the serve central London’s economy, which has been particularly badly hit by the pandemic. 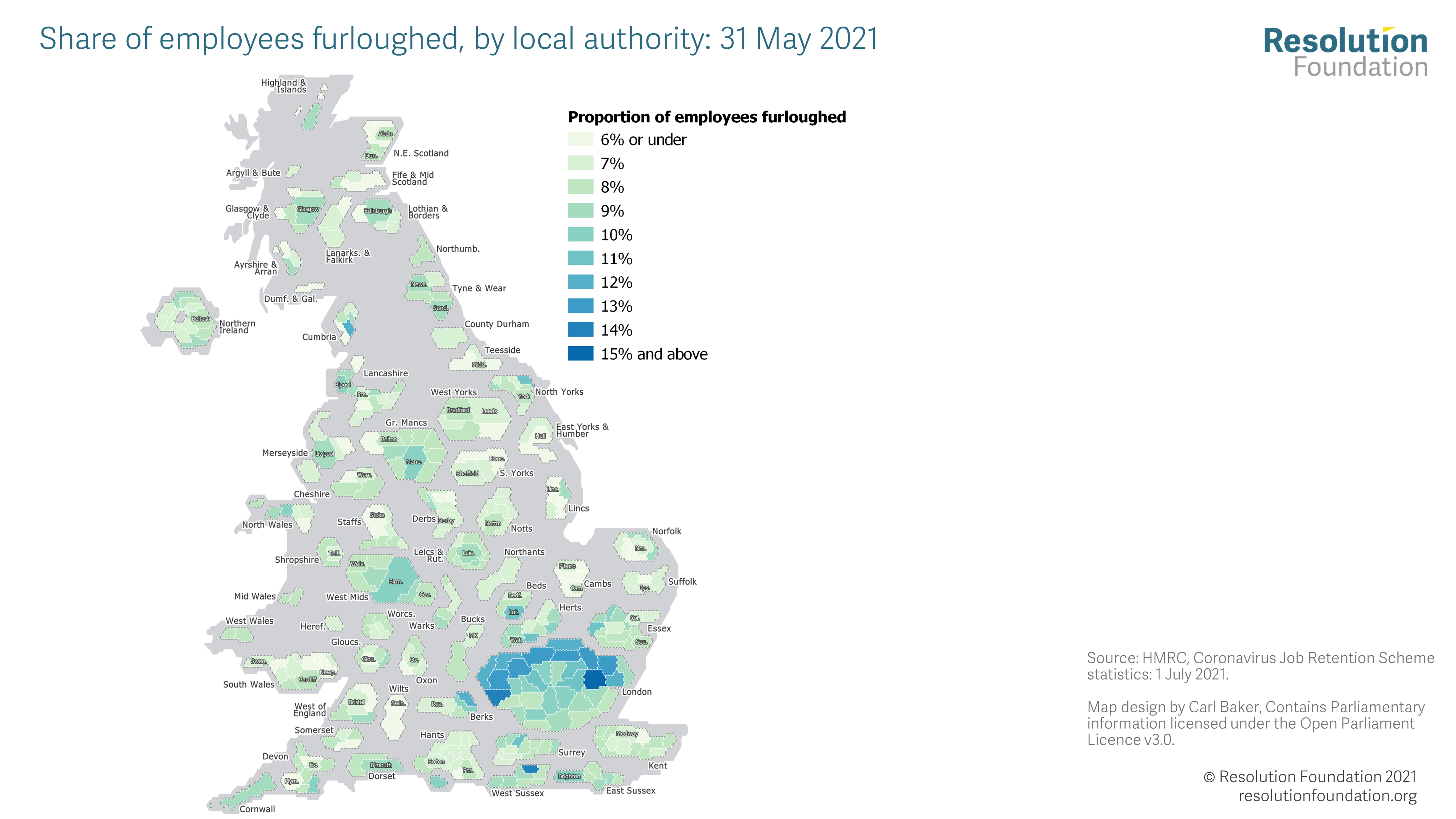