Today’s labour market looks nothing like it did even a decade ago. With more women in the workplace than ever before, the decline of key sectors such as retail and manufacturing and the rise of self-employment, who works, where we work and the ways that we work have all changed significantly over time. Laws and regulations designed to protect workers often lag behind labour market developments, yet in recent years the government has taken important steps to ensure that employment rights are fit for the modern world.[i] But rights are only worth the paper they are written on (or more likely today, the computers or phones we read them on) if they can be enforced.

As we launch a new three-year research project on labour market enforcement, supported by Unbound Philanthropy, this Spotlight delves into existing datasets and explores who is most at risk of labour market violation. This exercise is not without its challenges, however. Much of the official data available is not collected to answer this specific question, and there are a number of reasons why firms and workers could (wittingly or unwittingly) misreport. But despite these limitations, there is still a great deal we can discern from the available sources about labour market enforcement in the UK today.

The scale and incidence of labour market violations

To date, underpayment of the National Living Wage and National Minimum Wage (NLW/NMW) has been the most thoroughly studied type of labour market abuse, not least because it is relatively easy to measure objectively. Research by the Low Pay Commission using the Annual Survey of Hours and Earnings (ASHE, an employer survey) suggests that 23 per cent of those aged 25 and over covered by the NLW/NMW (that is, earning up to 5p above it) were underpaid in 2018.

Whether this estimate represents the true scale of minimum wage non-compliance, however, is contestable. There may be reasons why ASHE over-estimates non-compliance (for example, some workers may take some remuneration in the form of accommodation, or in practice only be entitled to the apprentice rate). On the other hand, it may be the case that employers avoid disclosing illegal behaviour, and so ASHE may understate the true picture. In this respect it is notable that the Labour Force Survey (LFS, a survey of workers) suggests higher levels of non-compliance than ASHE. However, the ability of those surveyed in LFS to recall their pay details with the level of precision required to establish underpayment means these estimates are sometimes considered unreliable.

If we focus, however, on how non-compliance varies across groups, there are key points of agreement between these two surveys. First, analysis of both ASHE and LFS make clear that underpayment affects many and is widely broadcast through the very bottom end of labour market (a point that the chart below, which presents the ASHE results, plainly shows). 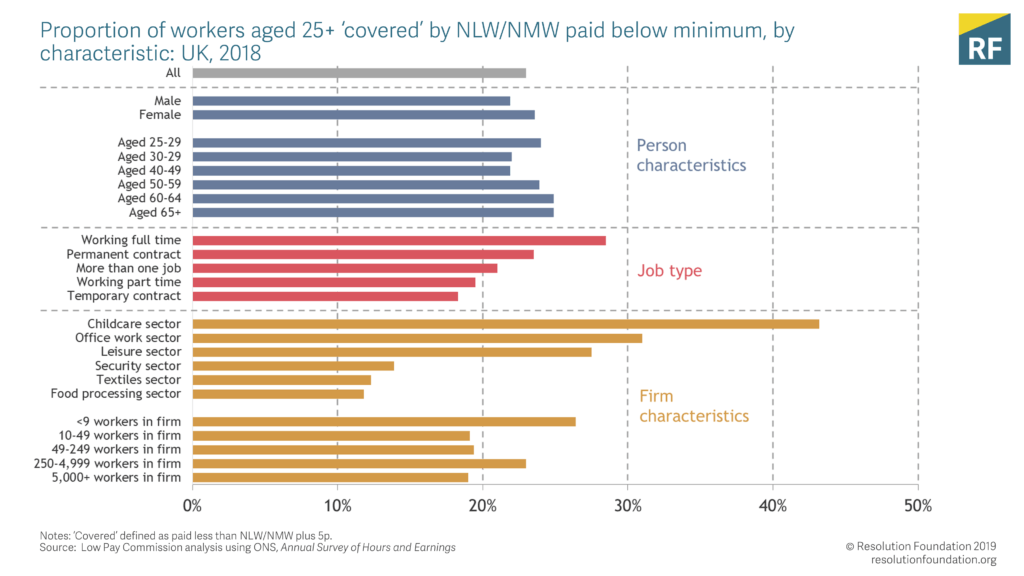 Second, both ASHE and LFS point to certain types of workers being most at risk of NLW/NMW underpayment, such as those in smaller firms and working in key service sectors. But LFS allows a more granular look at the composition of those who are paid below the wage floor, meaning we can investigate not just the personal and firm characteristics that are most strongly related to underpayment, but also the contract type. This source suggests that under-25s, zero-hours contract workers and (in contrast to ASHE) those on temporary contracts covered by the NLW/NMW also have an elevated risk of underpayment.

The LFS can also aid our understanding of those that report having no paid holiday entitlement – a clear breach given that under current law all except the self-employed have a day one right to paid leave.[ii] While this issue has been less well studied than NLW/NMW underpayment, it is broadly acknowledged that the financial losses to families from this type of violation are equal to those that result from breaches of the wage floor. The chart below presents our assessment of which workers have no paid holiday (as opposed to those that simply don’t know). 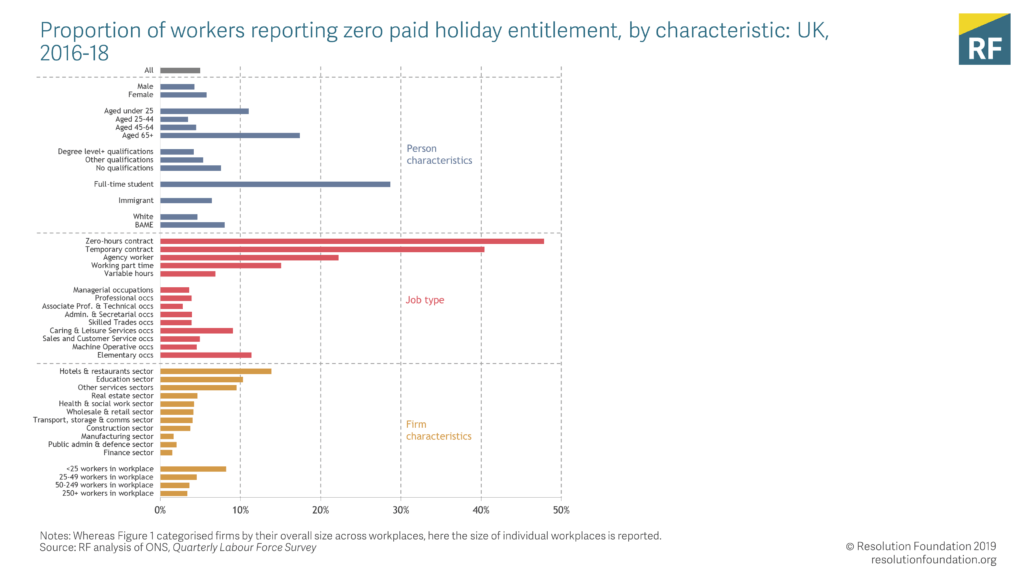 While one-in-twenty workers report having no paid holiday, The chart above shows that this type of labour market violation appears to be very much a feature of the fringes of the labour market, including those working in atypical ways. In addition, young people (and especially full-time students) have a greatly enhanced risk, while one-in-seven workers in hospitality say they have no paid holiday. Of course, an individual’s ability both to realise they are not receiving their full due and to illustrate any shortfalls in the event of a dispute in part relies on their having proper records. As a result, the findings in the chart below should certainly give pause for thought. Here, we show the share of workers who say they do not receive a payslip, despite the fact that it has long been mandatory to provide one to all employees (from April 2019, this requirement has been extended to all workers). Close to one-in-ten workers report that they are not given a payslip, with the youngest and oldest workers, immigrants and agency workers reporting higher-than-average rates of non-receipt. 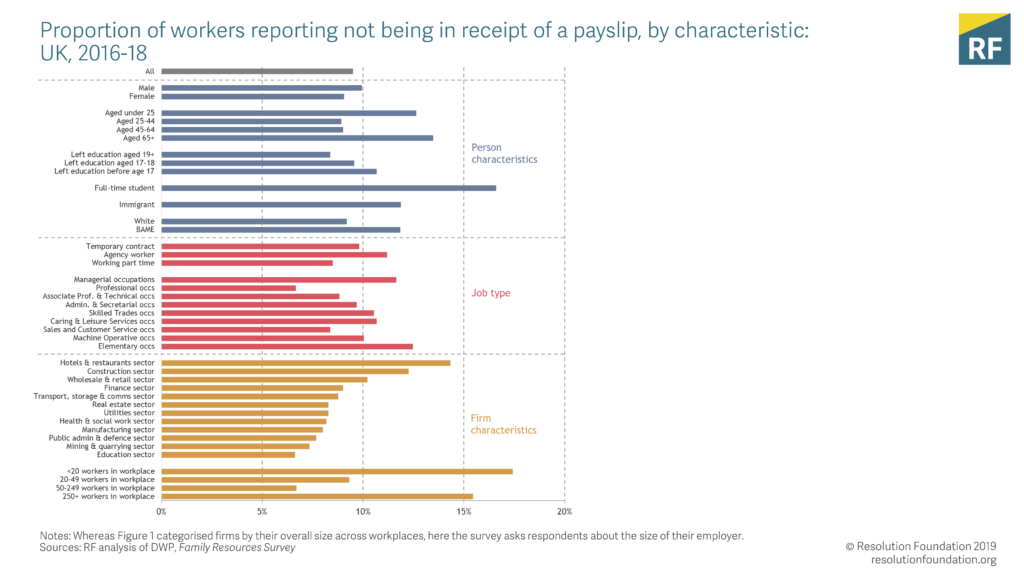 The fact that many of the same groups (young people, older workers, those in small firms and working in atypical ways) appear to be at greatest risk of each type of labour market violation is an important finding, suggesting that those on the receiving end of one form of non-compliant behaviour are often denied other rights, too. But what can this analysis tell us about the effectiveness of our current approach to enforcement?

A strategic approach to enforcement

Of course, in real life many of the characteristics we identify in the preceding analysis intersect: after all, young people are often students, work in a contingent fashion and are attracted to industries that make significant use of temporary staff. Using regression analysis we can explore the relative strength of personal, job and firm-based characteristics in predicting who is most at risk of each type of unlawful behaviour.

Looking first at the likelihood of reporting no paid holiday, we find that indicators covering job type (including atypical contracts and occupations) are the strongest predictors of this type of behaviour. Variables covering firm type (including sector and workplace size) play the next-strongest role, with the personal characteristics of workers offering the least predictive capacity. This hierarchy is repeated for NLW/NMW underpayment (as measured in the LFS), while firm characteristics are the strongest predictor of workers not being in receipt of a pay slip.[iii] In sum, the type of firm and especially the business model it chooses to adopt appear to more strongly predict non-compliant behaviour, certainly more so than the personal characteristics of workers themselves.

This finding about where risk lies has implications for the enforcement activities of state bodies such as HMRC (which has responsibility for investigating non-compliance with the NLW/NMW), the Employment Agencies Standards Inspectorate (EAS, the body with oversight of employment agencies) and the Gangmaster and Labour Abuse Authority (with its brief to protect vulnerable and exploited workers). Although each of these bodies has been awarded additional budget (and in some cases further-reaching powers) in recent years, the size of their collective resource remains small given the scale of the challenge they seek to address. This makes strategic targeting of activities critically important.

The state or the individual as enforcer

The welcome increase in resource for enforcement bodies over the last few years means that they are now able to follow up more individual complaints and undertake more pro-active investigations than ever before. In 2017-18, for example, HMRC identified over 200,000 individuals who had been short-changed when it came to the NLW/NMW, while the EAS investigated just over 1,000 cases in the same year.

Nonetheless, it remains the case that in the UK we rely largely on individuals to take action in the event of a breach of employment protections, either informally (by raising it with their firm or seeking advice from a body like a Citizen’s Advice Bureau) or formally (seeking help from ACAS or ultimately taking their employer to tribunal). To set HMRC’s (albeit greatly improved) record in the context of our labour market enforcement regime as a whole, it is worth noting that 191,000 individuals made an application to the employment tribunal (ET) in 2012-13 (the most appropriate year to use as a benchmark in our view as this was the year pre-dating the introduction of, now abolished, ET fees).[iv]

So what type of individuals do make a complaint on their own behalf? In the chart below, we explore the profile of those who persevered to the point of tribunal adjudication in 2012-13, using data from the Survey of Employment Tribunal Applications. We present our results as the number of workers that seek redress through an ET per 10,000 workers of each type. 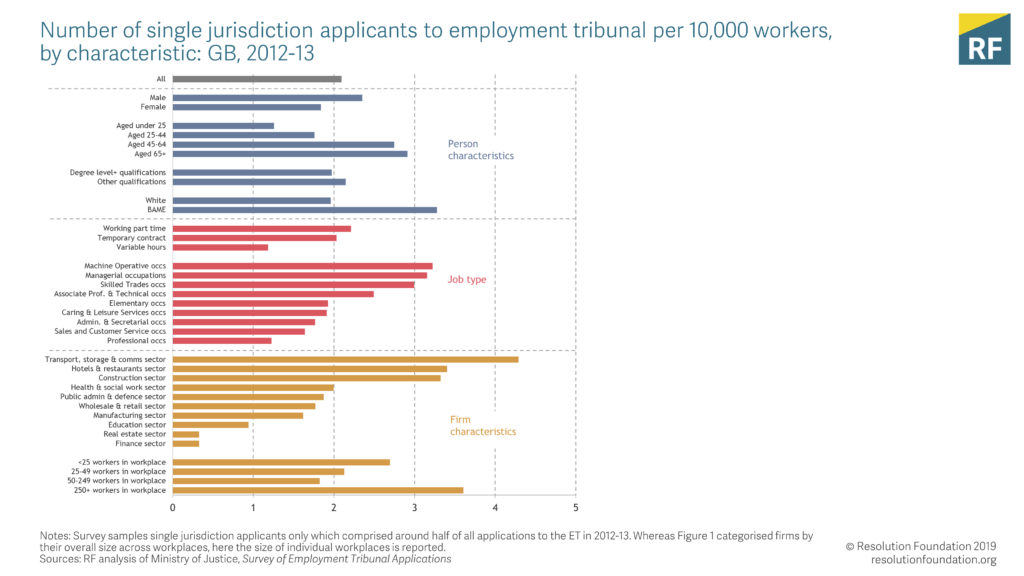 Comparing this chart with our previous analysis is highly instructive. We note, for example, that while younger people are systematically at higher risk of the three labour market violations we have explored, they are the least likely to take a case to an Employment Tribunal; that those in atypical forms of work who we know are more prone to exploitation have a below-average application rate; and that those in elementary occupations may be highly exposed to unlawful behaviour, but managers and directors are far more likely to take action against their employer.

The data available to investigate labour market violations and the effectiveness of the enforcement regime is subject to some real limits. Important questions are not asked in surveys; workers are often unaware they are being short-changed (or if aware, may be reluctant or too frightened to report the truth); key bodies such as ACAS (the first formal point of call for anyone wishing to raise a workplace grievance) do not collect significant amounts of information on the profile of complainants; and HMRC could be further enabled to share information on the types of firms not compliant with the minimum wage.

Yet while it has its limits, the official data does allow us to understand the broad shape of the enforcement challenge.  It shows, for example, that there is widespread non-compliance, and that those with the lowest level of connection to the labour market, in elementary occupations, and in fragmented types of work are the most at risk of being on the receiving end of unlawful behaviour from employers. We also note that firm and job characteristics are stronger predictors of non-compliance than the personal characteristics of workers. And finally, the data also tells us that those most at risk of violations are some of the least likely to take formal action on their own behalf. The government’s consultation on bringing its various agencies into a single enforcement body – and indeed the launch of our own three-year programme – look very timely indeed.

[i] Under UK employment law there are three tiers of employment status: employee (with the full suite of employment protections), worker (who have a more limited set of rights) and the self-employed (with the bare minimum of rights). None of surveys that we use in this Spotlight allows us to formally distinguish between employees and workers. Thus, all figures presented are for those who are legally employees and workers but exclude the self-employed.

[ii] While the European Court of Justice judgment held in 2006 that it is unlawful to ‘roll-up’ holiday pay into the overall pay rate, the practice is still observed, suggesting some workers might be in receipt of holiday pay without being aware.

[iv] The government introduced fees for employment tribunal applicants in July 2013, but these were found unlawful in July 2017 and quashed.