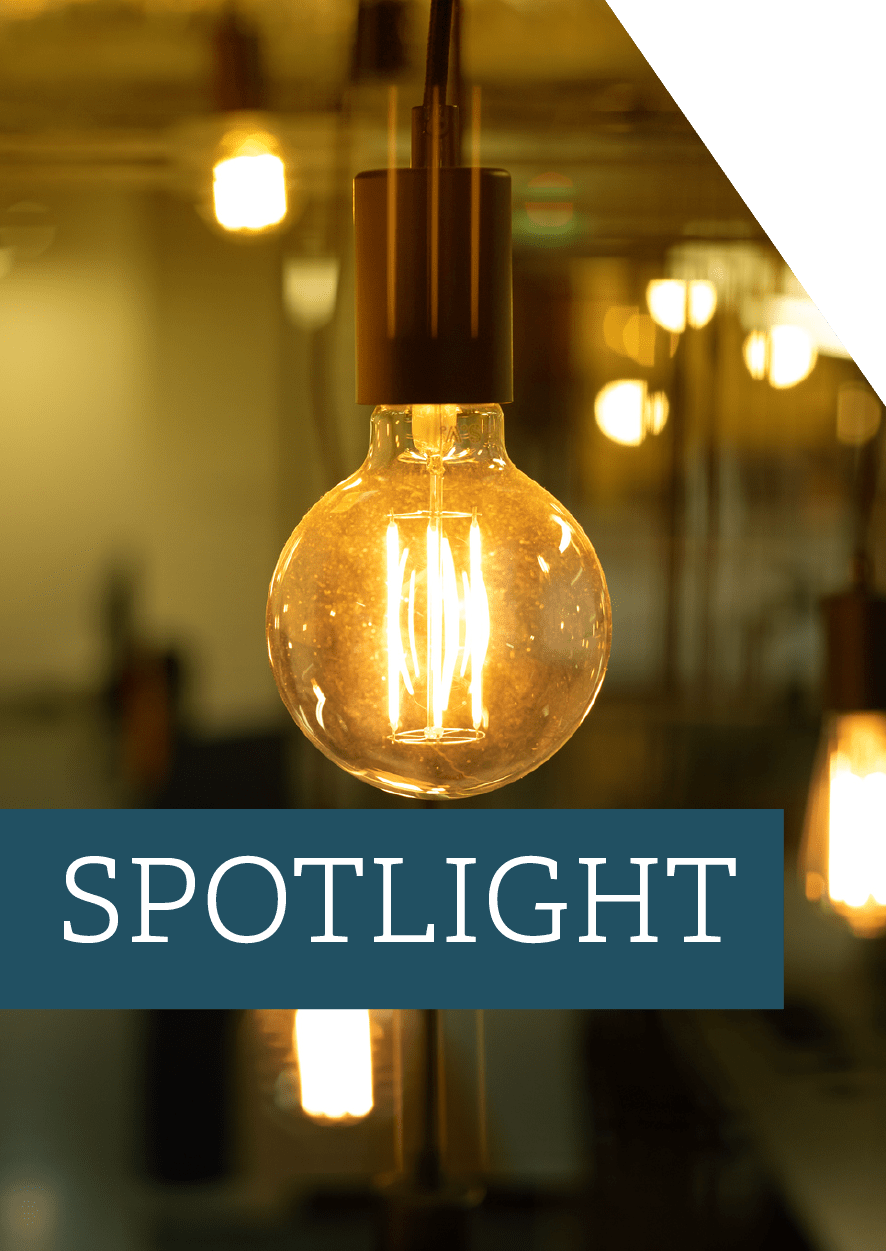 The higher energy price cap due to be introduced on April 1 will see energy costs jump by more than 50 per cent overnight. As a result, the share of English households experiencing ‘fuel stress’ (i.e. spending more than 10 per cent of their household budget on energy) will triple from 9 per cent to 27 per cent, equivalent to an additional 4 million households.

The sheer scale of this increase makes Government intervention unavoidable. The optimum response would be one that is both universal (providing help to all) and progressive (providing additional support to those on lower incomes). In absence of action via the benefits system, the best way to ameliorate the impact of rising energy bills is a policy package expanding the Warm Homes Discount; temporarily moving environmental levy costs to general taxation; and spreading the cost of supplier failure over three years. This response would reduce the rise in fuel stress by two-thirds, corresponding to 2.7 million families.

However, the current crisis also shows that the Government must combine a necessary short-term response with action such as incentivising home insulation, renewable energy generation and a move away from gas boilers if households are to be protected from fuel shocks in the years and decades to come.

‘Fuel stress’ is set to rise dramatically in 2022

The impending increase in energy bills will be a major crunch point in what is shaping up to be a year of squeezed budgets. The average bill is set to jump from £1,277 to around £2,000 a year when the price cap is increased in April this year.[i] The primary Government response should be lessening the impact of high energy costs on low-income households – for whom energy costs take up three times as much of household budgets as higher-income households, and who will be less able to shoulder additional spending.[ii]

It is hard to understate the impact of such a large price rise, which risks an overnight trebling of the number of households in ‘fuel stress’ (defined as spending more than 10 per cent of their household income on energy). [iii] Fuel costs of £2,000 a year would mean 6.2 million English households struggling to pay bills, an increase of more than 4 million on current levels (seeing the proportion rising from 9 per cent to 27 per cent).

Figure 1: Older households and families in inefficient homes are particularly likely to feel the squeeze when energy bills jump in April

Increased energy spending will crowd out other spending, especially for low-income households

We can investigate what such a price rise might mean for household finances by examining what happened after previous increases in energy costs (it is worth noting, however that the ‘overnight’ nature of the upcoming increase is unique in its scale). As Figure 2 shows, utility costs rose steadily from 2011 to 2014, again driven by a rapid rise in hydrocarbon costs. During this period, spending on utilities for the bottom income quintile increased from less than one-ninth of non-housing expenditure to more than one in every six pounds spent. This was a far greater impact than that experienced by higher income households, supporting the Government’s declared intention of prioritising financial support. It should be noted that energy prices did subside around 2015 and 2016, though a repeat is of course not guaranteed. 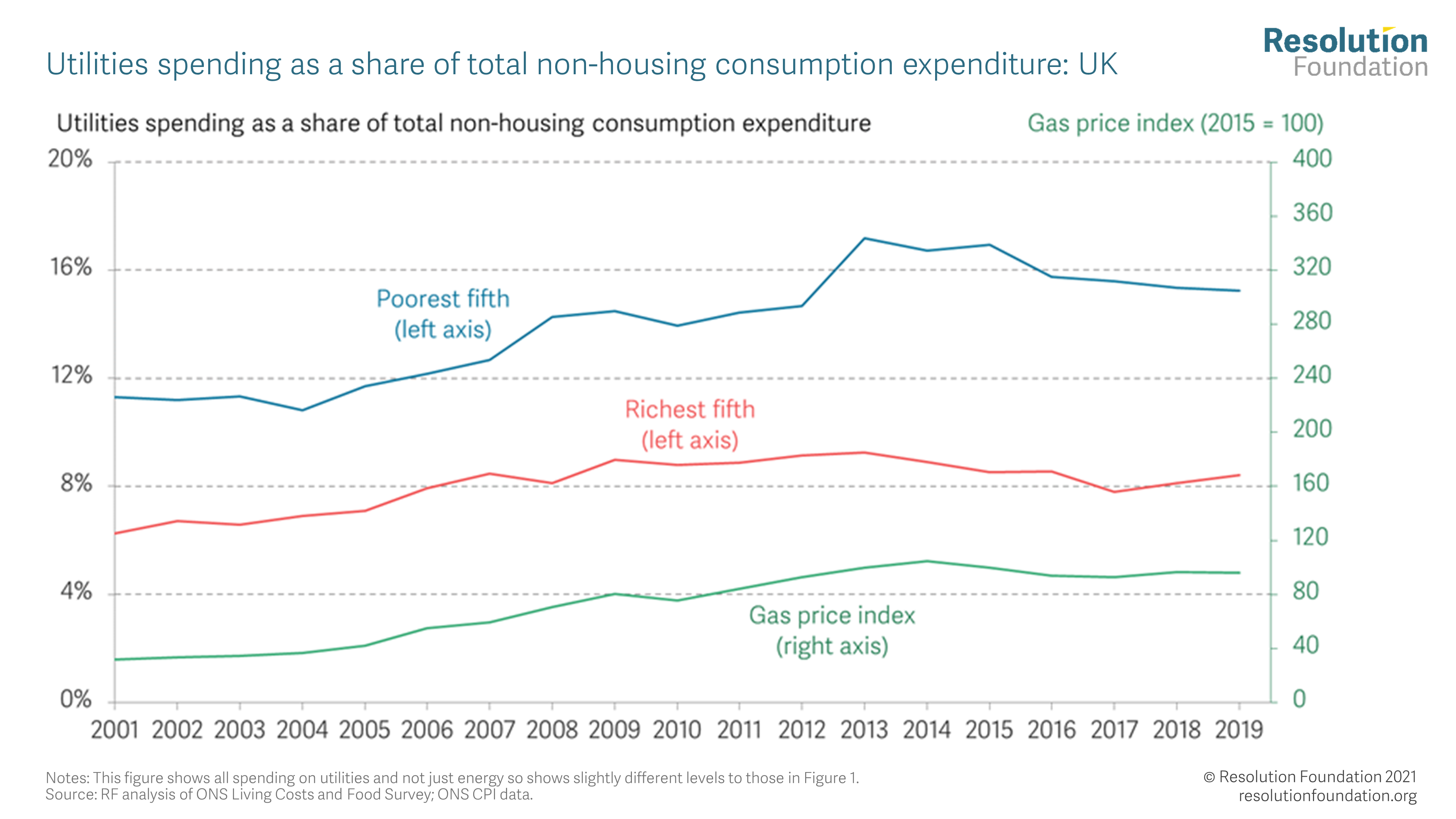 While the long-term solution to volatile energy costs should be clear – a dramatically reduced dependency on gas – this does not help household finances in the short term. It is therefore inevitable that the Government will act to assuage some or all of the imminent jump in bills. The hit to all household budgets and the extra severity for lower-income households means that both universal and targeted approaches deserve serious consideration.

There are currently a number of universalist options on the table:

While each of these options would help, it is clear that much larger and more targeted support will be needed. Ideally this would be done by applying a higher uprating to benefits from April (and potentially making an offsetting reduction to the uprating next year). An additional benefit rise must not (as during the Government’s pandemic response) be limited to Universal Credit, and should cover benefits received by pensioners, as well as so-called ‘legacy’ benefits received by working-age adults. However, although the benefit system is the most efficient way to target support, both main parties appear reluctant to take this path. An alternative option, therefore, is to use the Warm Homes Discount (WHD) – an existing policy that provides annual rebates of £140 to 2.2 million low-income households. But this policy would require major surgery, including but not limited to making rebates available to more households that need them, as Figure 3 shows. Currently less than seven-in-ten (69 per cent) of the lowest-income households are eligible for the WHD, alongside fewer than half (47 per cent) of households in the second income decile.

Figure 3: As it stands, a significant proportion of the lowest-income households are ineligible for the Warm Homes Discount

These reforms should include:

Figure 4 shows the impact of these options, and combinations thereof, on levels of fuel stress in England. While the universalist options – VAT and levy reform – would lower the fuel bills of all households, they would need to be combined with measures targeted at lower-income households. A response made up of a temporary move of levies into taxation, spreading the cost of supplier failure and an additional £300 WHD rebate would nearly halve the proportion of households set to be in fuel stress come April 1, at a total cost of £7.3 billion for the year as a whole (comprised of £2.5 billion for the expanded WHD and £4.8 billion for the levies).[ix]

Figure 4: Moving levies into general taxation and reforming the Warm Homes Discount could greatly reduce the number of households in fuel stress 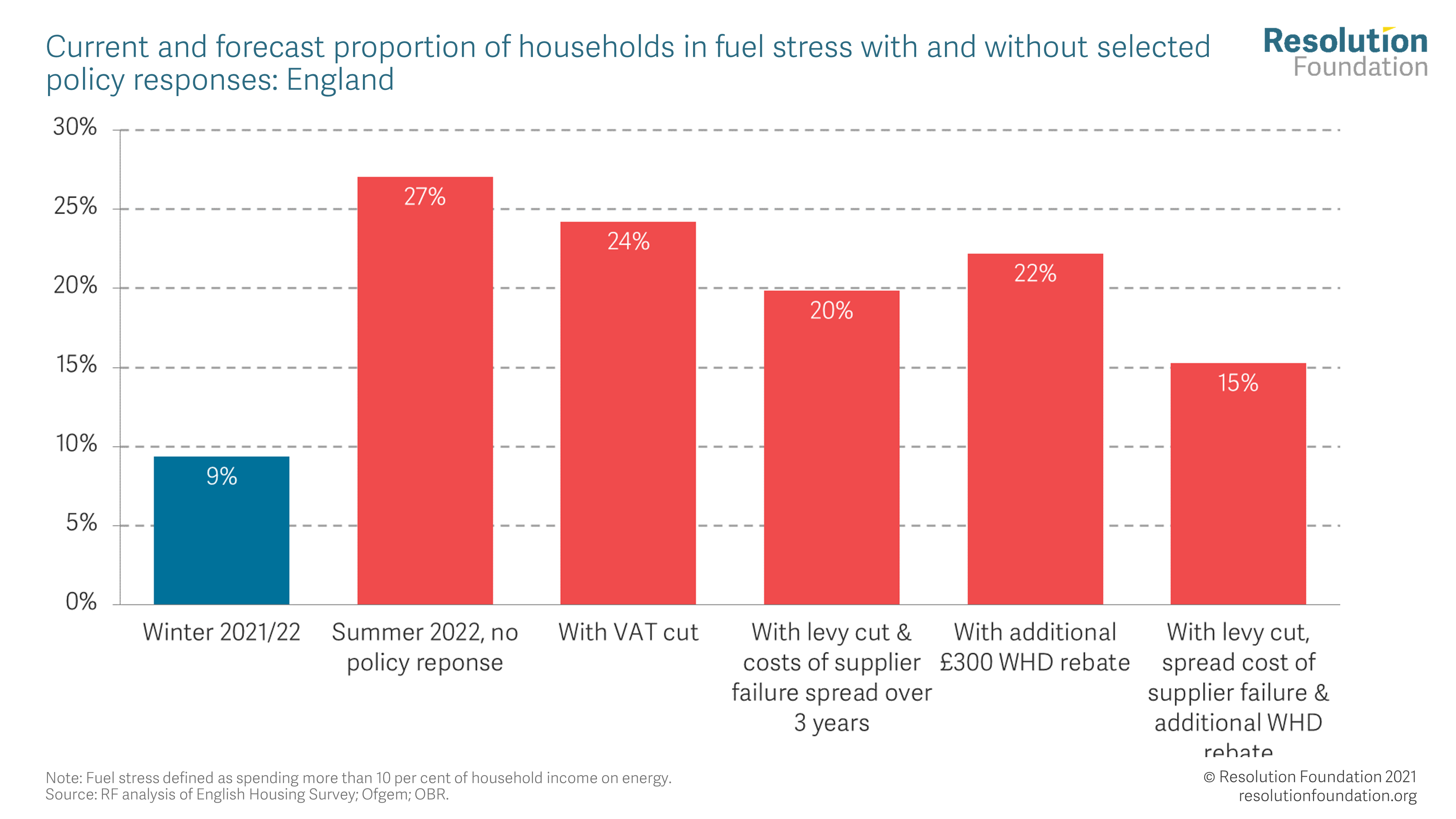 Of course, this additional spending must be paid for. Given the anticipated scale of additional profits in the oil and gas (and parts of the electricity) sectors it is almost inevitable that some form of windfall tax will follow. However, this is unlikely to be of sufficient scale to cover all the costs of the Government’s policy response, therefore it is important to recognise that higher future taxes will be needed to fund lower fuel bills today. What is clear though, is that any additional spending should not be funded through energy bills.

Longer term, it is vital that policy makers build more resilience into the energy system to prevent future price shocks. While an effective short-term response is clearly the priority to help poorer households with energy bills this summer, recent developments in the energy sector further highlight the need to lessen reliance on imported fossil fuels. Actions to make this a reality – outlining more frequent and larger renewable energy auctions, accelerating plans for new nuclear power stations, reducing energy waste across the economy but especially for low-income households with poorly insulated homes, and modernising the outdated architecture of our electricity system – are all yet to be seen. Only by accelerating the shift to a cleaner, cheaper and more stable energy system will households be better protected from future energy shocks.

[i] Figures are for households on a standard variable tariff limited by the energy price cap, assuming average gas and electricity consumption.

[ii] Of measures suggested to date, a reduction on VAT has been dismissed by Government as being insufficiently targeted (although it remains Labour party policy), with ministers seemingly edging towards a solution such as the Warm Homes Discount, in which rebates on energy bills are offered to qualifying households.

[iii] This marker is a barrier indicative of being in ‘fuel stress’ (and still the official marker of fuel poverty in Scotland, Wales and Northern Ireland).

[v] VAT receipts from energy bills are set to increase in line with the price cap, increasing from £1.8 billion per year under the current level to £2.8 billion from April 2022.

[vi] Moving non-energy levies into general taxation could see insulation and social schemes pitted against wider Governmental spending, risking a reduction in funding akin to that seen in the early 2010s when the Government responded to high energy costs by ‘cutting the green crap’. This slashed support for renewable energy and home insulation that would have provided long term stability from energy shocks, including for millions of households currently facing unaffordable price rises.

[vii] Currently only the ‘core group’ of WHD recipients receive payments automatically, with the ‘broader group’ left to apply via energy suppliers. Additionally, while the Government is currently consulting on broadening the WHD, increasing eligibility to a further 780,000 households and increasing the rebate from £140 to £150 per year, these modifications are neither sufficient in scale nor will come into effect before April 1.

[viii] Current wholesale futures contracts suggest that the winter 2022-23 price cap will be at a comparable or even higher level than the summer 2022 cap.

[ix] Spreading the cost of supplier failure would require loans being made available to cover costs borne by energy companies that have taken on new customers, provided either by the Government or the private sector.