2021 begins with England and Scotland heading into new lockdowns, and tough ones at that. Lasting until at least late February, England’s new restrictions are more comparable to those of spring 2020 than the more relaxed autumn affairs. In this short note we focus on the experience of that first lockdown, and what it can teach us about what is to come. Some of the lessons we identify are for policy makers, but others are for all of us as employers and workers, parents and friends trying to manage through these grim times.

Some of what to expect is painfully obvious. A rampant virus and ramped up restrictions, mean a much weaker start to 2021 in terms of economic activity than the Office for Budget Responsibility was forecasting in November. Once again, the young and lowest earners will be hardest hit given their work most often cannot be done from home. Furlough rates will rise, and while the numbers will not hit the peaks of April and May given that far more of construction and manufacturing will remain open, they will certainly surpass the 4 million we estimate were furloughed during November’s lockdown. Indeed more furloughing is desirable because we should be getting on with using the Job Retention Scheme to plug the gap left by our inadequate sick pay regime.

But beyond the big picture economics, there are a number of more human lessons to take away from the first lockdown. Here’s five we think are especially important today.

Lesson 1:  We’re not all in this together when it comes to our homes

The inequality of the first lockdown was not just about who saw their work dry up – it was also about the very different lived experience of staying at home. The young are three times as likely to be living in damp conditions as those aged over 65 (see Figure 1). Even bigger gaps exist between rich and poor individuals: less than 3 per cent of 35-to-44-year olds in a household in the top-third of the income distribution lives in a damp home, for example, compared to 9 per cent of those in the bottom-third. While poor housing conditions are never good for health (there are well-proven links with childhood asthma), this will matter far more in winter than in the warmth of spring (with real implications for the fuel poverty rates of those trying to heat sub-standard homes). 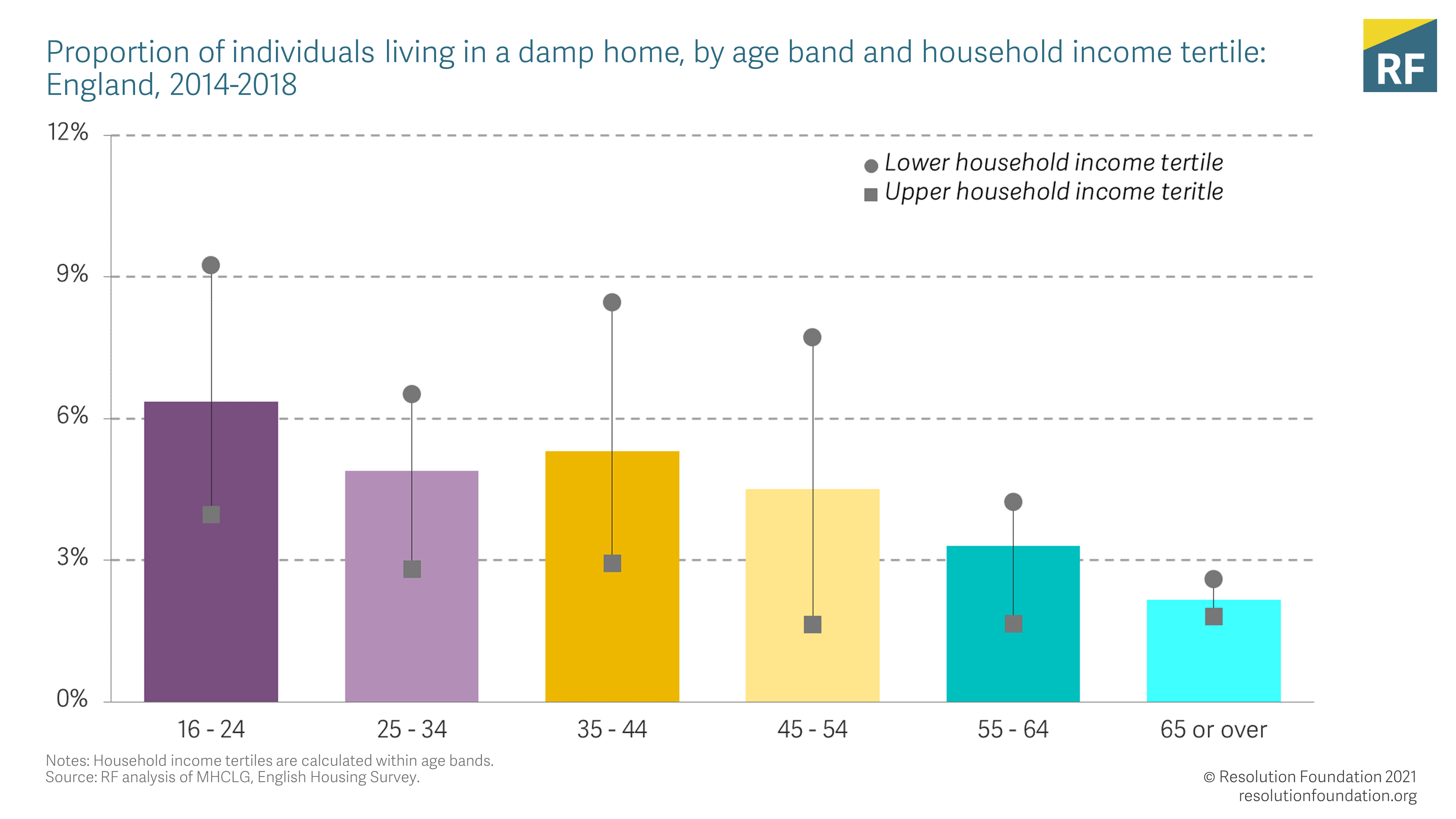 Moreover, poor quality homes can impact not just on physical but also on mental health. Housing conditions had a stronger independent effect on well-being during the first lockdown than they did before the pandemic: even after controlling for key characteristics such as pay and relationship status, the well-being gap between renters (who overall live in poorer quality housing) and owners widened over the spring 2020. The slightly more relaxed rules on social contact this time around (support bubbles, for example) are clearly designed to help our mental health, but are unlikely to offset the impact on some of spending large parts of the winter months in poor quality homes.

Lesson 2: School closures are tough on children, both in the short- and long-term

Anyone who home schooled through the first lockdown will tell you how difficult an experience that was on a day-to-day basis, but there are also serious long-term implications of renewed school closures. The impact on educational inequality of the first lockdown has been set out starkly in a number of studies: almost three-quarters of private school pupils had full school days in the spring compared to around half that among state school pupils.  But children can only make best use of school provision when they have the right environment: as Figure 2 makes clear, more than one-in-twenty poorer children lack internet access, and more than one-in-five children in a low-income household will spend this lockdown in an overcrowded home.

Figure 2: Many children are learning and exercising in less-than-ideal conditions 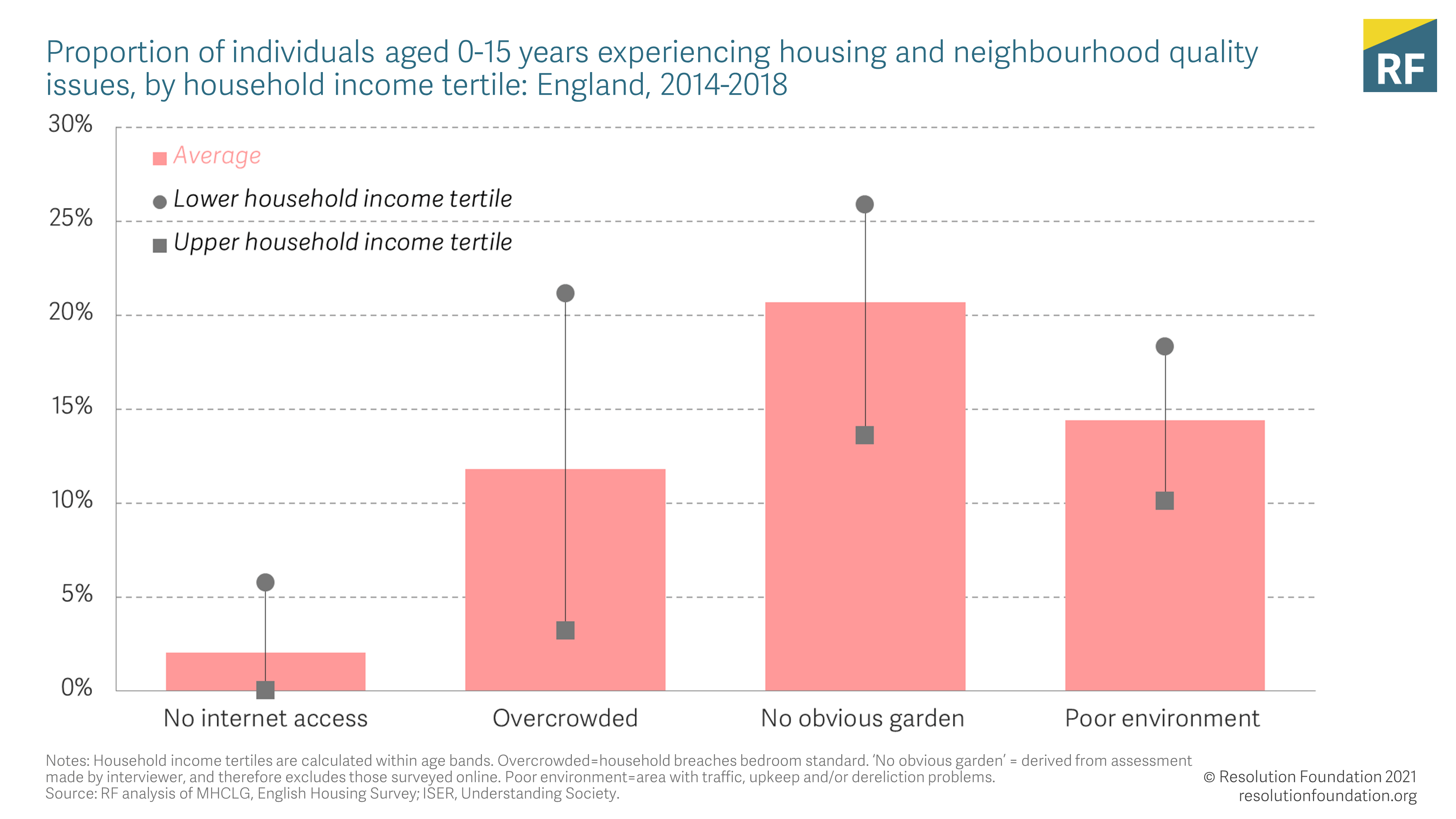 Lesson 3: Low-income families often have to spend more in lockdown

For many, 2020 was about saving money as lockdown curtailed normal spending patterns: the savings rate in 2020 is expected to be three times that of 2019. But averages hide major differences. Critically, not everyone’s costs went down as Figure 3 shows. More than one-in-five households saw their expenses increase in spring last year, an experience that was amplified for those with dependent children who were 40 per cent more likely to see their costs rise than those without.

Figure 3: Spending increased more for lower income families with children during the first lockdown than other types of households 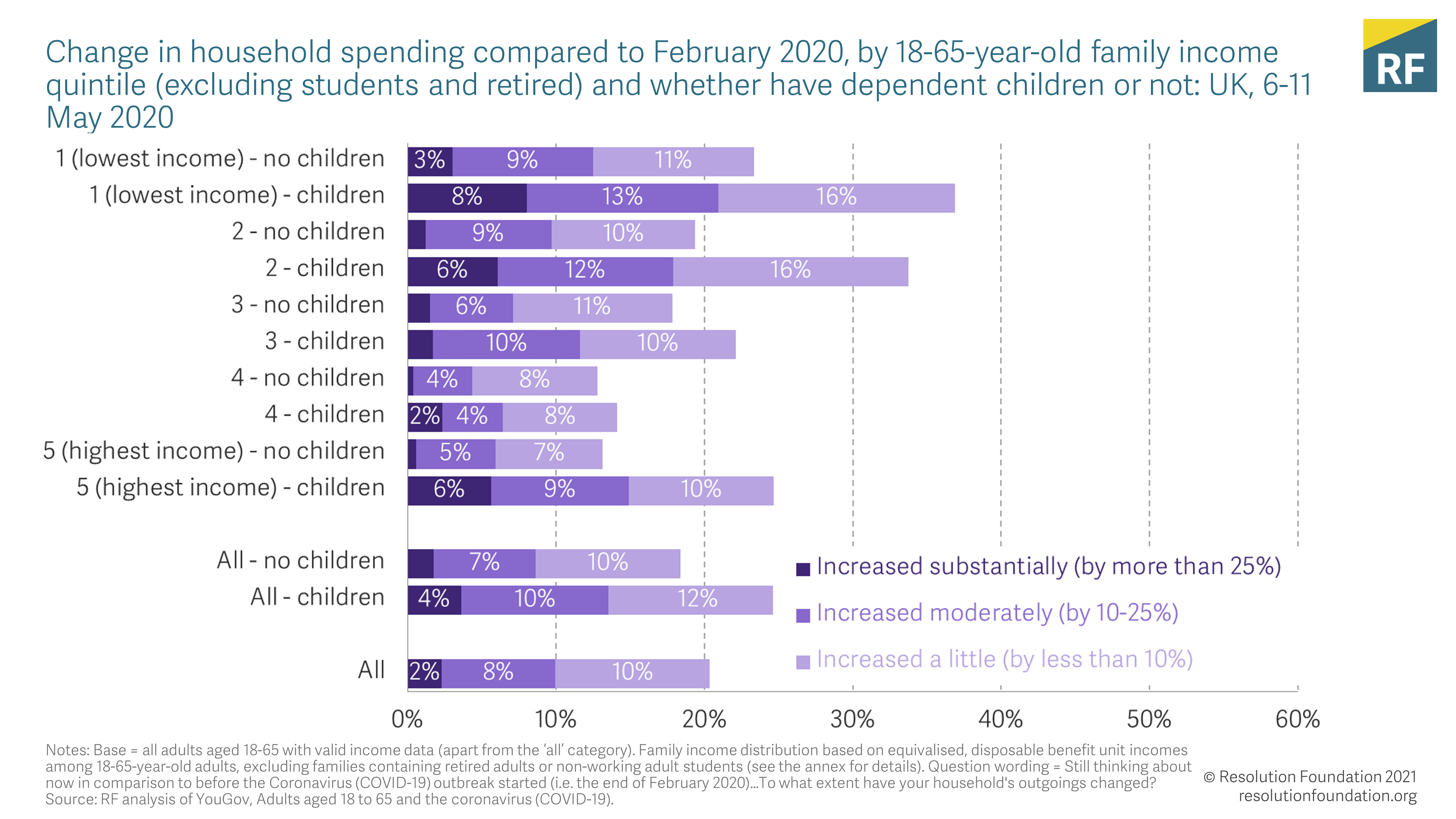 Expenditure patterns during the first lockdown were also differentiated by household income. Most strikingly, over one-third of families with children in the lowest income quintile reported increased costs in spring 2020, closely followed by a significant share in the second household quintile. Basics such as food and heating are likely to have weighed harder on those lower down the income distribution (watch this space next week for new work investigating this question further).

The economic impact of a lockdown that includes school closures is not just limited to the costs of having children at home: it is also the impact on earnings and work. When we look at this question, it is the gender divide that stands out. While overall the Covid-19 crisis has had a broadly equal impact on men and women, the first lockdown had a very uneven effect on the working patterns of mothers and fathers. As Figure 4 shows, mums were almost twice as likely to reduce their hours of work to care for children in the first lockdown as dads (16 per cent compared to 9 per cent).

Figure 4: Women were almost twice as likely to cut hours of work to care for children than men when schools were closed 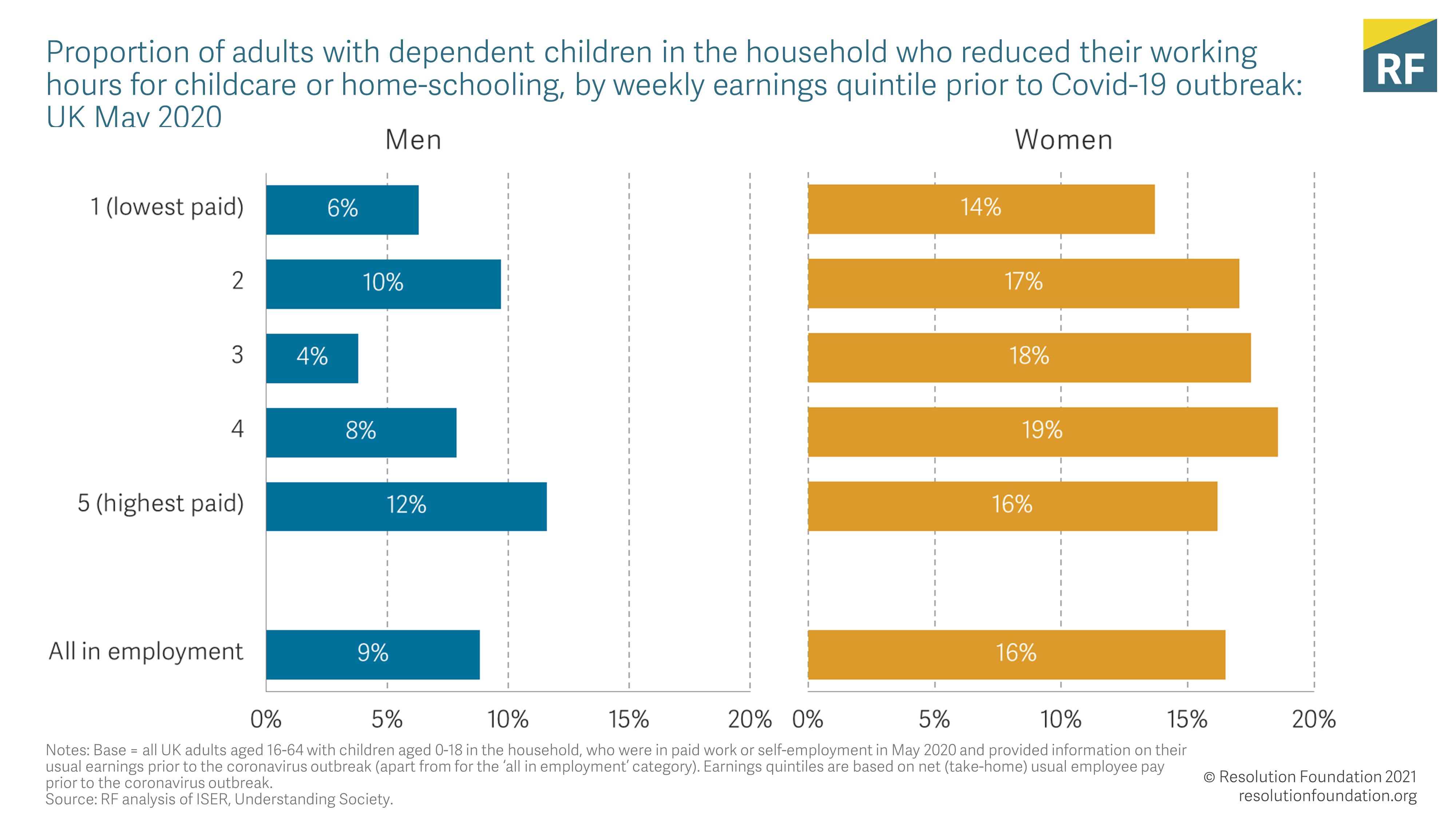 Moreover, mothers were around one-third more likely to have lost their job than fathers during the first lockdown, whereas among non-parents, job losses were gender-balanced. It is clear that this trend is driven significantly by the closure of schools: the gap between male and female parents closed by September when schools reopened, while in the US, gender hours gaps have opened up in part because far fewer American schools returned to in- person teaching in the autumn.

Lesson 5: Many families are entering this lockdown with lower reserves

Lockdown 2021 will be different from spring 2020 in some key ways, not least because there is a clear light at the end of the tunnel with the promise of two million vaccinations a week during February. But just as health workers facing the Covid-19 surge in hospitals are fatigued from 2020, so, too, are many a families’ finances. As Figure 5 shows, those with the lowest levels of savings are the most likely to have drawn down on them to get through the first phase of this pandemic –a trick that cannot be repeated this time around.

Figure 5: Those with the lowest savings were most likely to draw down on their reserves for everyday costs during the pandemic 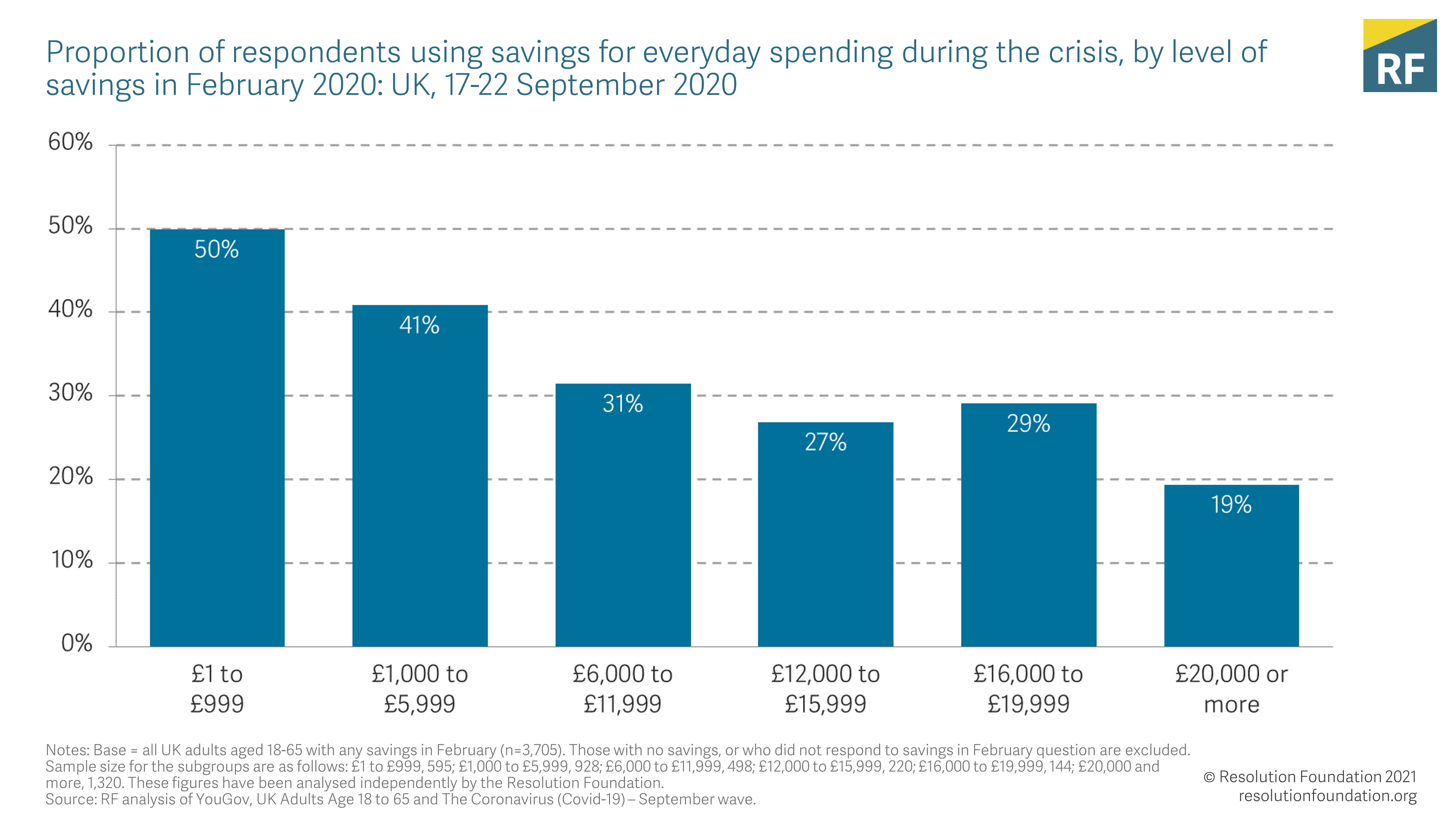 Of course, a significant share of families had no savings to fall back on in 2021 and another lockdown raises the risk that such families will build up problem debt. In September 2020, more than four-in-ten (42 per cent) adults reporting using at least one form of borrowing (credit cards, catalogue debt and the like) to a greater extent than they did in February to cover everyday living costs. Most strikingly (and worryingly), this figure rises to over half (54 per cent) for those living in the lowest income families, indicating the pressure such households are under.

As England and Scotland head into new lockdowns today, we have a much better idea of what both the economic and human impacts are likely to be of the coming months. From difficult times for those in crowded accommodation to higher costs for poorer families with children, greater gender disparities when it comes to work and the increased widening of long-term educational gaps, policy needs to respond to this reality, not least by maintaining financial support and scrapping plans to reduce benefits by £1,000 per year in April. But as families and friends, colleagues and neighbours, we all have to help each other cope with the burden of such exceptional restrictions on our liberty that ultimately the virus rather than the government has imposed upon us. And at least this time we can do so with some confidence that better times lie ahead.