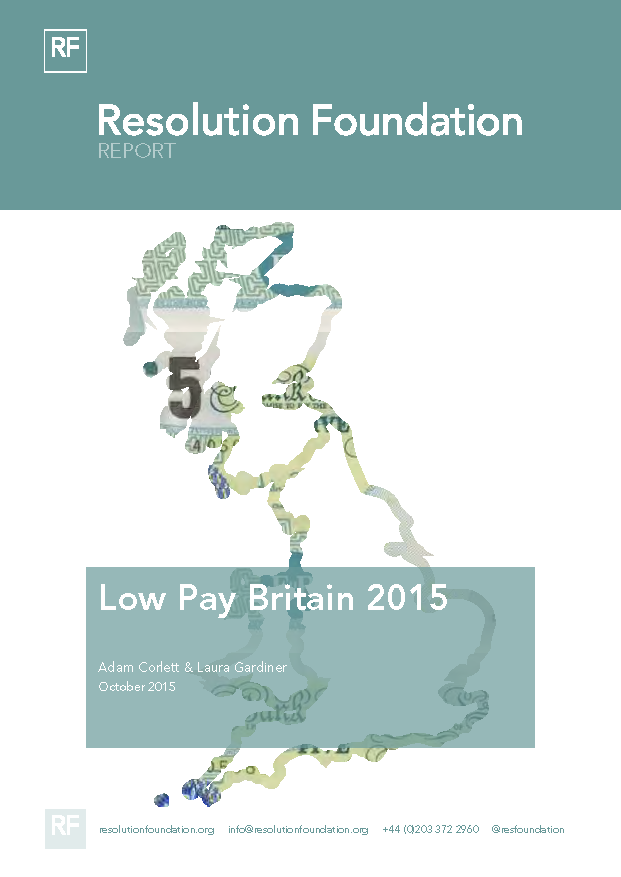 This is our fifth annual report on the prevalence of low pay in Britain. It uses the latest data available (2014) to map out the scale of low pay and the groups that are most affected. It shows how this has changed over recent decades and looks at what the coming years might hold, particularly given the introduction of the National Living Wage in 2016.

Even before the financial crisis hit, too many employees in Britain were low paid by the standards of the day and relative to other countries. The downturn has done little to alter that, and pay has fallen behind the cost of living. More than ever, then, there is a pressing need for strong growth – both rebounding from the crisis and beyond – that is shared with those currently on low pay.

Across all measures, those most likely to be low paid include women, the young, part-time and temporary employees, those in lower-skilled occupations, and those employed in the hospitality, retail and care sectors. While the self-employed are not included in our analysis, their exclusion likely underestimates the scale of low pay.

We model what impact the NLW will have on low pay and find that:

However, the NLW is also likely to lead to a significant bunching of the pay distribution. The share of employees paid only their age-specific legal minimum was around 1 in 50 in the years following the introduction of the minimum wage in 1999. In 2014, around 1 in 20 were on the wage floor. With the introduction and growth of the NLW, by 2020 more than 1 in 9 are expected to be paid at or only just above the legal minimum, including more than 1 in 7 in the private sector. This increases the need for employers and government to provide personal progression opportunities to get people beyond the wage floor.

Despite the rising wage floor for over-24s, the proportion of workers paid below the needs-based, voluntary Living Wage is expected to continue to rise. From 22 per cent in 2014 it is projected to reach 24 per cent (6.5 million individuals) in 2016, and perhaps 30 per cent by 2020 if the Living Wage continues to rise as it has.

But even a successful NLW can only do so much. Broader living standards for those on low and middle incomes will be determined by a combination of real wage growth for all (underpinned by productivity growth), employment levels, and changes in welfare support.