The Bank of England today unveiled the biggest rise in interest rates since 1995 along with plans to bring down the stock of Quantitative Easing (QE) by £80 billion over the next year. But the real news in today’s announcements was the extent to which the central bank expects the cost of living crisis to deepen: despite the Government spending over £30 billion in support, the Bank is forecasting that the economy will fall into recession later this year, contract for six successive quarters and not recover its pre-pandemic level within the forecast period (ending mid-2025). Inflation is now projected to peak higher – at an eye-watering 13.3 per cent in October – and high inflation will now be with us for longer.

All this is disastrous for living standards: the Bank now expects that real household disposable income will fall by around 3.7 per cent over the course of 2022 and 2023 – the largest such fall on record. To pile misery onto families, the Bank forecasts that unemployment will rise by roughly 900,000 people; the Bank sees this as sufficient to keep inflation from becoming entrenched. It is important to stress that there is massive uncertainty here: if gas prices follow market pricing (rather remaining at elevated levels as underlies the Bank’s forecast) inflation would be well below target and we could see rate cuts next year. Nonetheless, the message from the Bank is clear – expect Bank Rate to rise to around 3 per cent – which, in time, could add £200 (relative to before the Bank’s tightening cycle) to the typical monthly mortgage repayment.

All this lays bare the challenges for the next Prime Minister: although they might hanker after a honeymoon period, the reality is that the deepening economic crisis will be top of their ‘to-do’ list – and in particular providing support focussed on low-to-middle-income households – when they step into 10 Downing Street on 5 September.

The Bank of England announces an historic tightening in policy, and signals more to come

The Bank today tightened policy for a sixth successive meeting and by 0.5 percentage points – the largest rise in nearly 28 years. The Monetary Policy Committee (MPC) voted 8-1 to increase its official policy rate (Bank Rate) to 1.75 per cent, the highest since the financial crisis in 2009. As shown in Figure 1, this is now the sharpest rate-tightening cycle in more than 30 years. But the MPC were clear that more is to come, signalling that rates could rise to 3 per cent. According to the Bank, rate rises prior to today’s add around £80 per month to the mortgage interest payments of a family with a mortgage balance of £140,000 and a remaining term of 17 years. This would rise to around £200 if rates were increased to 3 per cent.

Figure 1: This is the fastest rate tightening cycle in more than 30 years 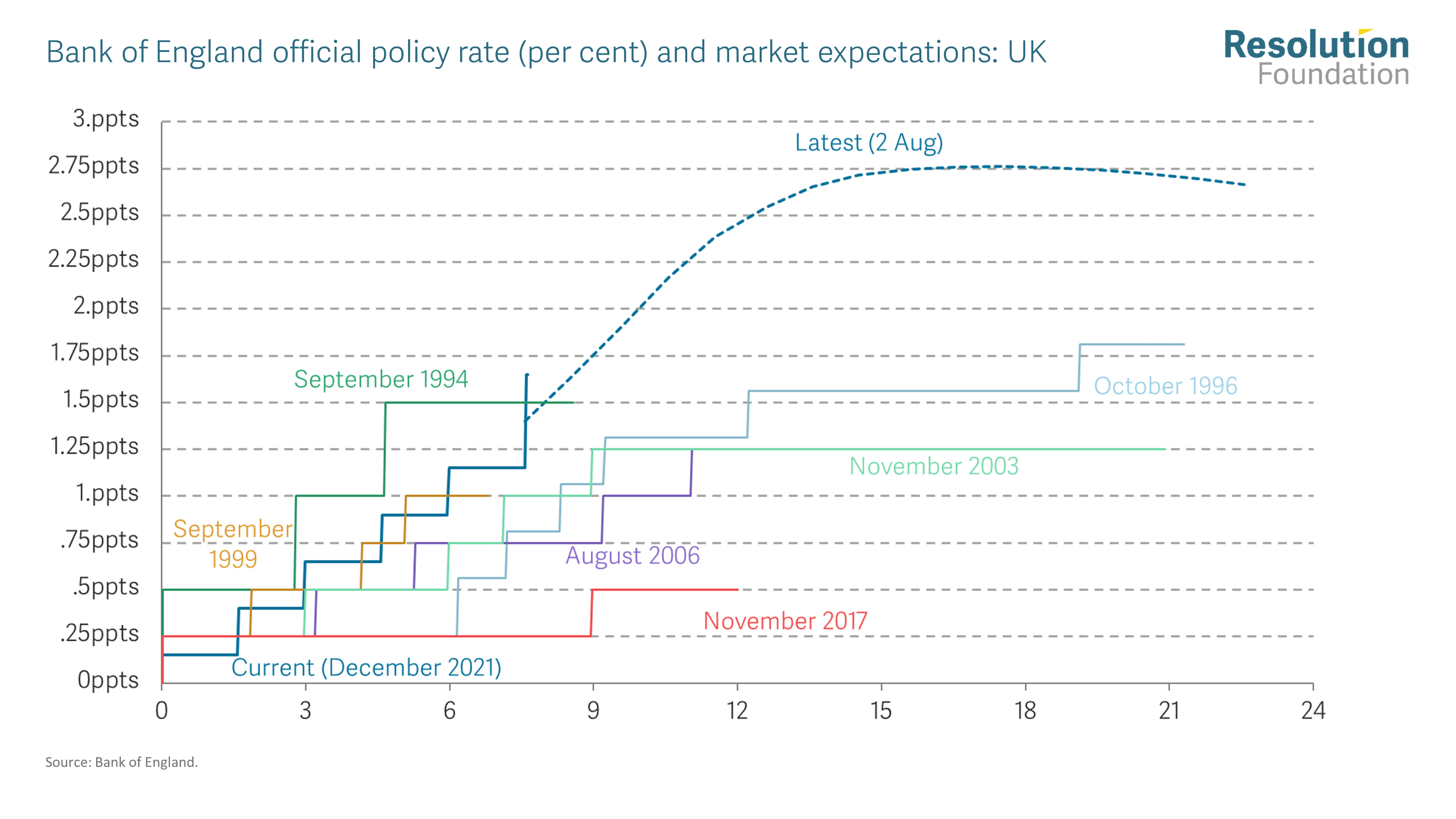 The Bank also announced plans to reduce the stock of QE – a process known as ‘Quantitative Tightening’, or QT. Having already said that it would not reinvest the proceeds from maturing government bonds (gilts), the Bank now plans to begin active sales of gilts in September, bringing down the stock of gilts by £80 billion over the first year. As shown in Figure 2, sales at this pace are towards the top end of what the market was expecting and would see the stock of gilts held by the Bank fall below £150 billion by the end of this decade. This policy could lead to longer-term interest rising more sharply than shorter-term rates, and this would put further upward pressure on mortgage rates. As we have said previously, there is a good case for unwinding QE, but a key test will be the extent to which it adds to government borrowing costs.

Figure 2: The Bank is set to actively start unwinding QE starting in September 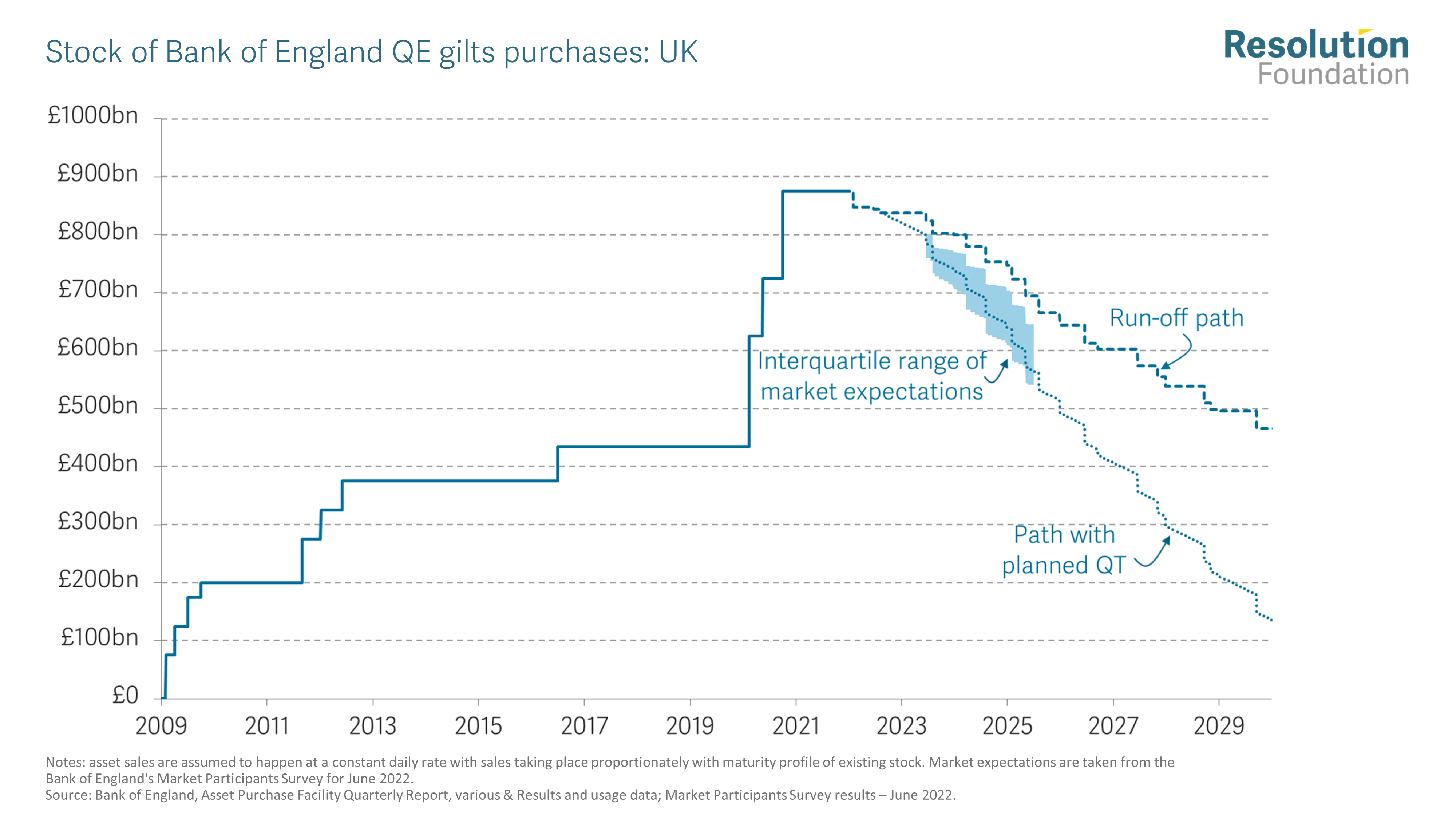 The Bank now expects inflation to peak at 13.3 per cent in October 2022 – up from the peak of around 11 per cent they expected at the last MPC meeting (Figure 3). This has primarily been driven by gas futures prices, which have almost doubled since the Bank’s previous Monetary Policy Report. Consumers have, so far, been protected from the latest surge in gas prices because the energy price cap has not been reset since April, but that will change in October when the Bank expects the new cap to be around £3,500 (close to three times the price cap at the start of the year). The Bank also sees upside risk to inflation in early 2023, particularly if there is further disruption in gas markets from Russia reducing supply by more than expected.

Rising energy prices will lead families and businesses to cut back spending on other items, and higher prices overall will mean that spending will not go as far. All this means a significantly weaker outlook for the economy, and the Bank is now forecasting a recession. As shown in Figure 4, the Bank expects the economy to contract every quarter from the end of 2022 until Q2 2024, longer than the five quarters of negative growth experienced during the financial crisis. The level of real economic output by the end of the forecast in mid-2025 is expected to be 0.9 per cent lower than output prior to the pandemic. This implies the recovery from the Covid-19 pandemic will be slower than that from the financial crisis (the economy was 0.5 per cent below its pre-recession level by the end of 2012). 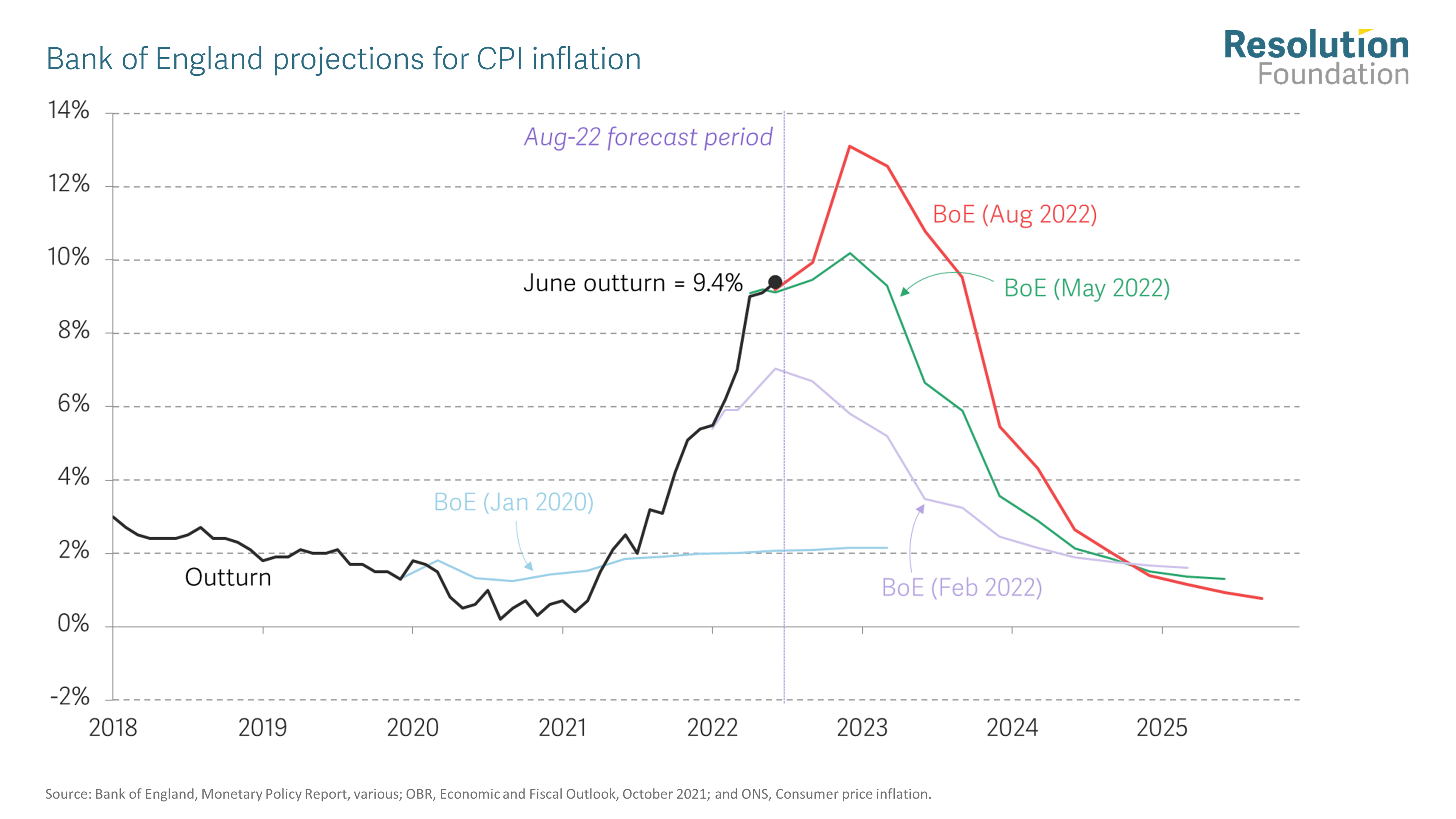 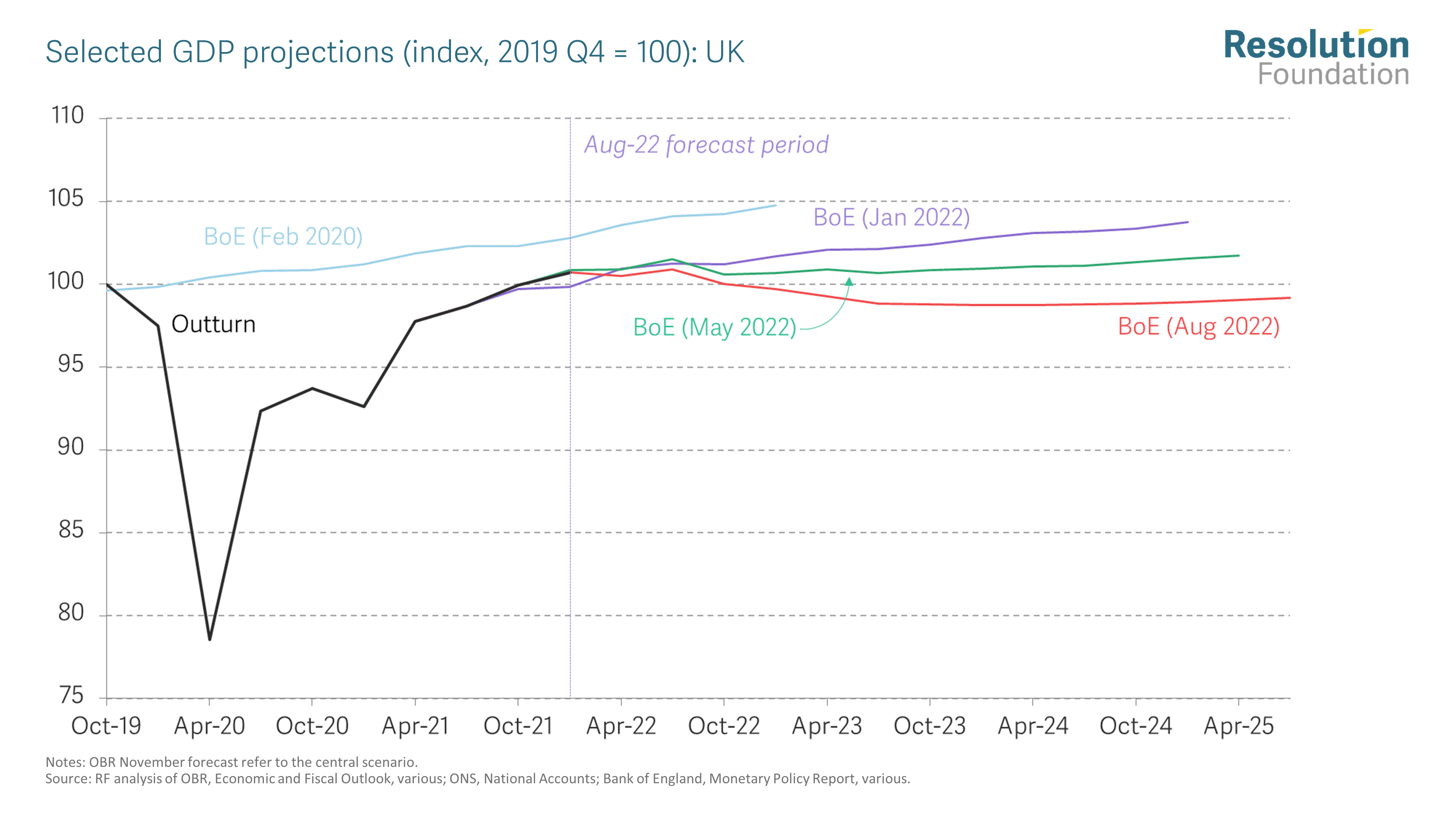 The Bank of England is now forecasting a grim outlook for living standards. The weaker economy is projected to lead to a rise in the unemployment rate from its current level of 3.8 per cent to above 6 per cent (that is around 900,000 more people in unemployment). This, combined with higher and more long-lasting inflation, means that the Bank is now projecting real household disposable income to fall by 3.7 per cent across 2022 and 2023, as shown in Figure 5. This is easily the weakest two years on record (to 1963).

Figure 5: The Bank is projecting the weakest 2 years for living standards on record 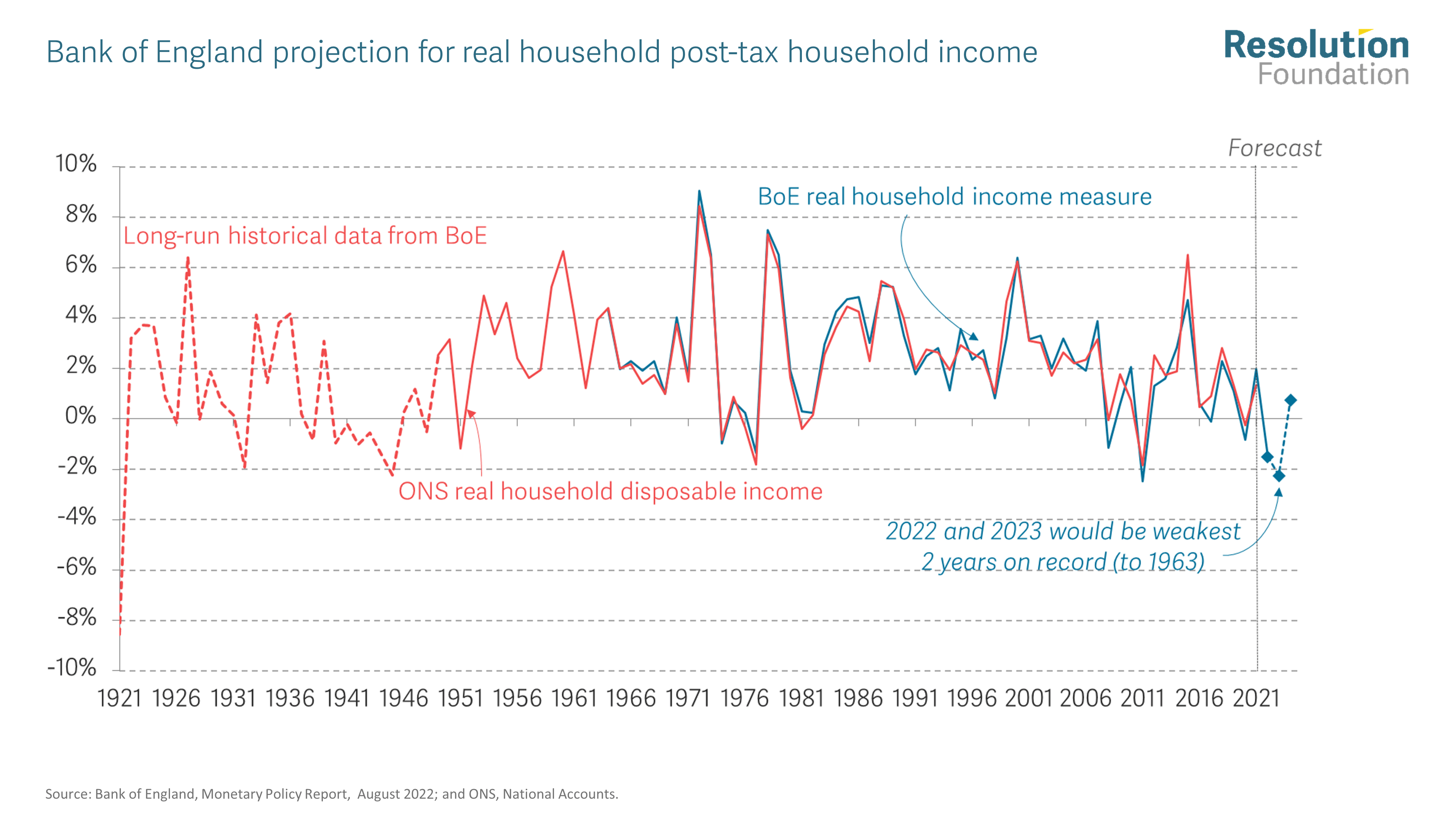 Figure 6 converts the Bank of England’s aggregate measure of real post-tax income into an average level for UK households. On this basis, the Bank’s forecasts are the equivalent of a roughly £2,000 fall in average income across this year and next, with only a small rebound in 2024. As discussed in our previous work, this comes on the back of a prolonged period of weak income growth since the financial crisis that has left many low-income families with low levels of savings.

Figure 6: Households are set for a huge fall in income next year 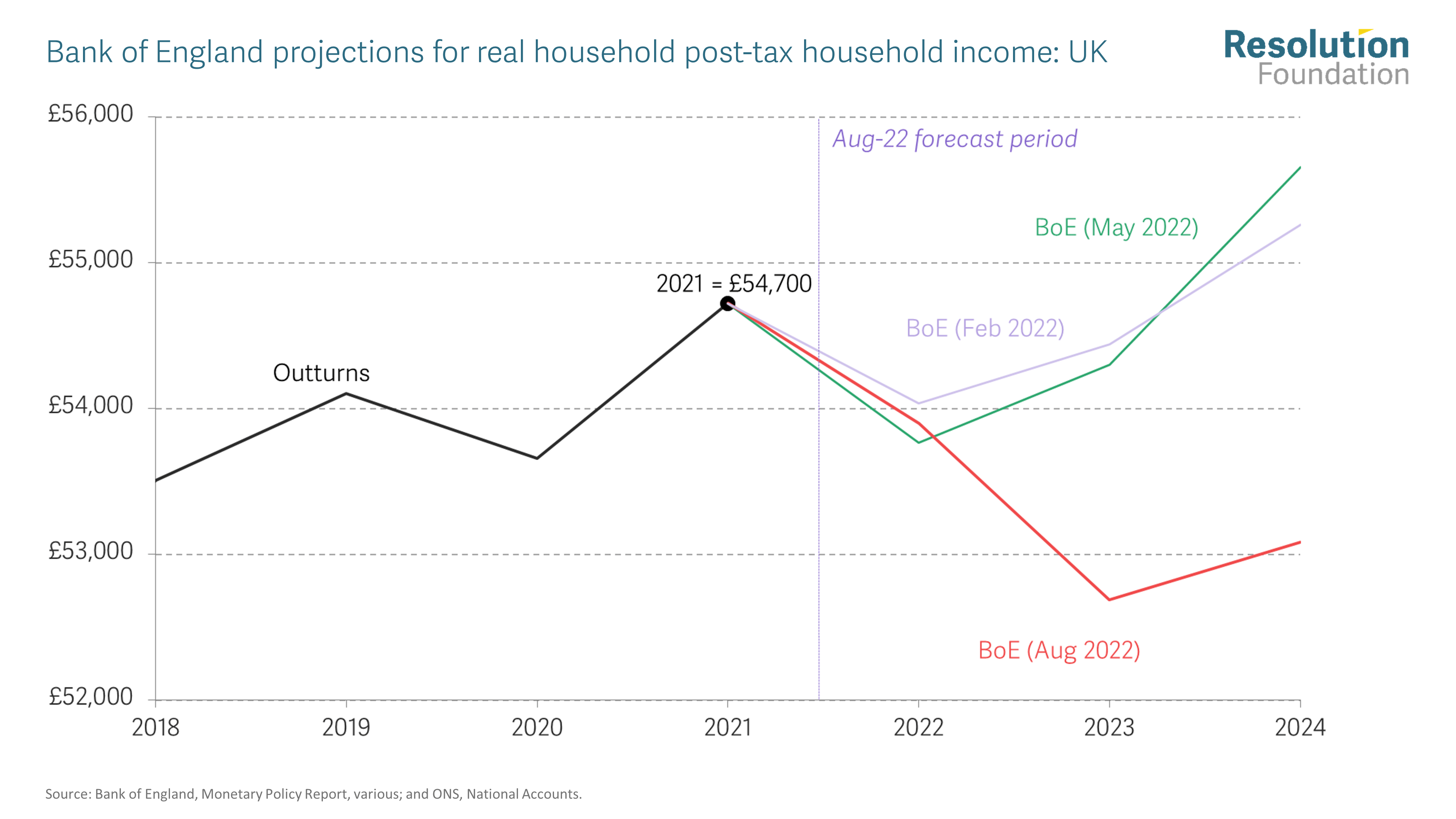 All this lays bare the challenges for the next Prime Minister: with a hugely challenging winter only a few months away. There is no quick fix to rising energy costs, so the Government will inevitably need to do more to shield families from the worst effects of the crisis. That support should be focused on low-to-middle income households who are being hit hardest by the rise in the cost of living, and have the least flexibility to adapt to the new environment. So, while it is the Bank of England’s job to make sure that high inflation does not become entrenched, it is the new Prime Minister’s job to make sure that this cost of living crisis does not lead to widespread hardship.

Slower for longer
The Bank of England tightens monetary policy again and warns that the outlook is bleak
4 August 2022
·
Jack Leslie, James Smith
In the dread of winter
Prospects for inflation in the coming months ahead of the Bank of England’s Monetary Policy Report
3 August 2022
·
Jack Leslie
As good as it gets?
The forces driving economic stagnation and what they mean for the decade ahead
18 July 2022
·
James Smith
Back to top