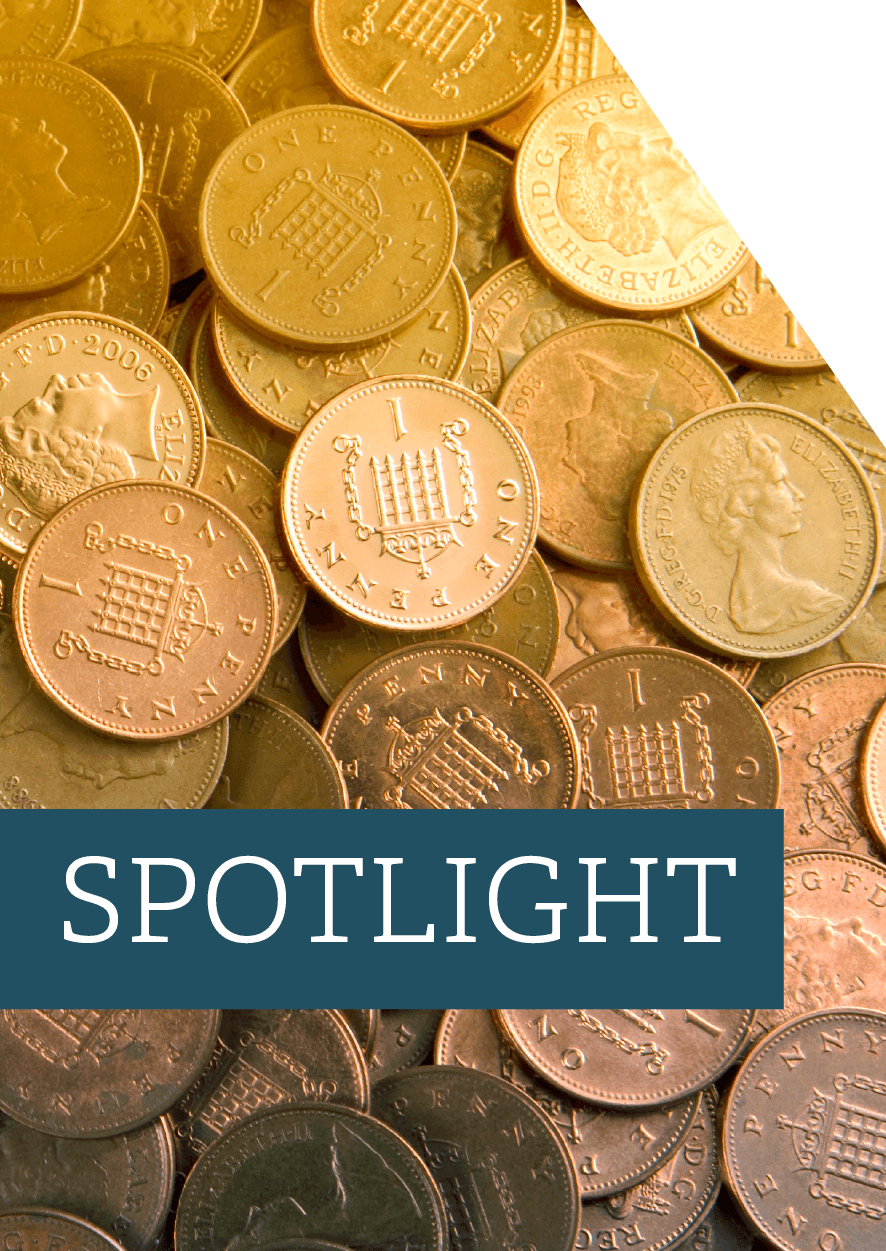 The surge in claims for Universal Credit (UC) when the pandemic first hit means that UC caseloads are now about twice as high as they were pre-pandemic, with over half of all single parents now in receipt of UC.  About 60 per cent of the current caseload have newly-claimed UC during 2020, and the fraction of these adults who are in work has actually risen during 2020, now standing at around four-in-ten.

New survey evidence shows the extent to which UC claimants are experiencing financial difficulties. A third of new UC claimants report their family income (including UC) to be at least 40 per cent lower in January 2021 than its pre-pandemic level, one-in-five are behind on essential bills, and three-in-ten families that started claiming UC during this crisis are more in debt than they were in February 2020.  Looking ahead to the next three months, a period in which UC is set to be cut by £20 a week (from 5 April 2021), three-in-five (61 per cent) of families on UC say they will struggle to keep up or will fall behind on bills, around twice the proportion of families across the economy as a whole (31 per cent). Removing the £20 a week boost to UC at the end of March will only compound the financial strain these families face.

In the next four weeks, the Government needs to decide whether to continue with the £20 a week increase to Universal Credit (UC) and the Working Tax Credit (WTC). This benefit boost was introduced in April 2020 as the UK went into lockdown, shortly after the onset of the Covid-19 pandemic. The plans set out in the Government’s Spending Review in November 2020 were for the boost to expire at the end of March 2021. Doing so would mean the main rate of UC for a single adult would fall from £343 to £257 per month, the lowest real-terms level for our basic unemployment benefit since 1990-91. It would also contribute, according to previous Resolution Foundation work, to a rise in relative child poverty of 400,000 in 2021-22.

This Spotlight reviews what we know from official data about the change in the UC caseload since the pandemic began (which only covers Great Britain)[i], and presents flash results from an online survey we commissioned in January 2021 (this was conducted by YouGov between 22 and 26 January 2021, and funded by The Health Foundation). The survey was of 6,389 working-age adults, and figures have been weighted and are representative of all UK adults (aged 18 to 65). Of those, 371 adults (unweighted) said that they were receiving UC in January. All figures presented from the survey have been analysed independently by the Resolution Foundation and the views expressed here are not necessarily those of the Health Foundation or YouGov.

Universal Credit caseloads are about twice as high as they were pre-pandemic, with over half of all lone parents now in receipt

When the UK went into lockdown in Spring 2020, there was a surge in the number of Universal Credit recipients, with 1.4 million starts on the benefit in April and May last year (compared to around 200,000 in a typical month). Since April, claims have continued to rise but at roughly the same rate as the caseload rose pre-crisis (Figure 1).

By December 2020, there were almost 6 million adults claiming UC, although as claims are calculated and paid as a family (or ‘benefit unit’), this translates to fewer UC awards. In addition, some 14 per cent of these family awards were not in payment (for example if they had high enough earnings) in the latest data (covering monthly awards in August 2020).

The Department for Communities in Northern Ireland does publish statistics for Universal Credit, however these are not all on the same basis as those published by the Department for Work and Pensions for Great Britain. In our survey, we have included 129 respondents who were living in Northern Ireland (of 6,389), of which five were claiming Universal Credit.

Figure 1: There has been a huge rise in benefit claimants during the crisis 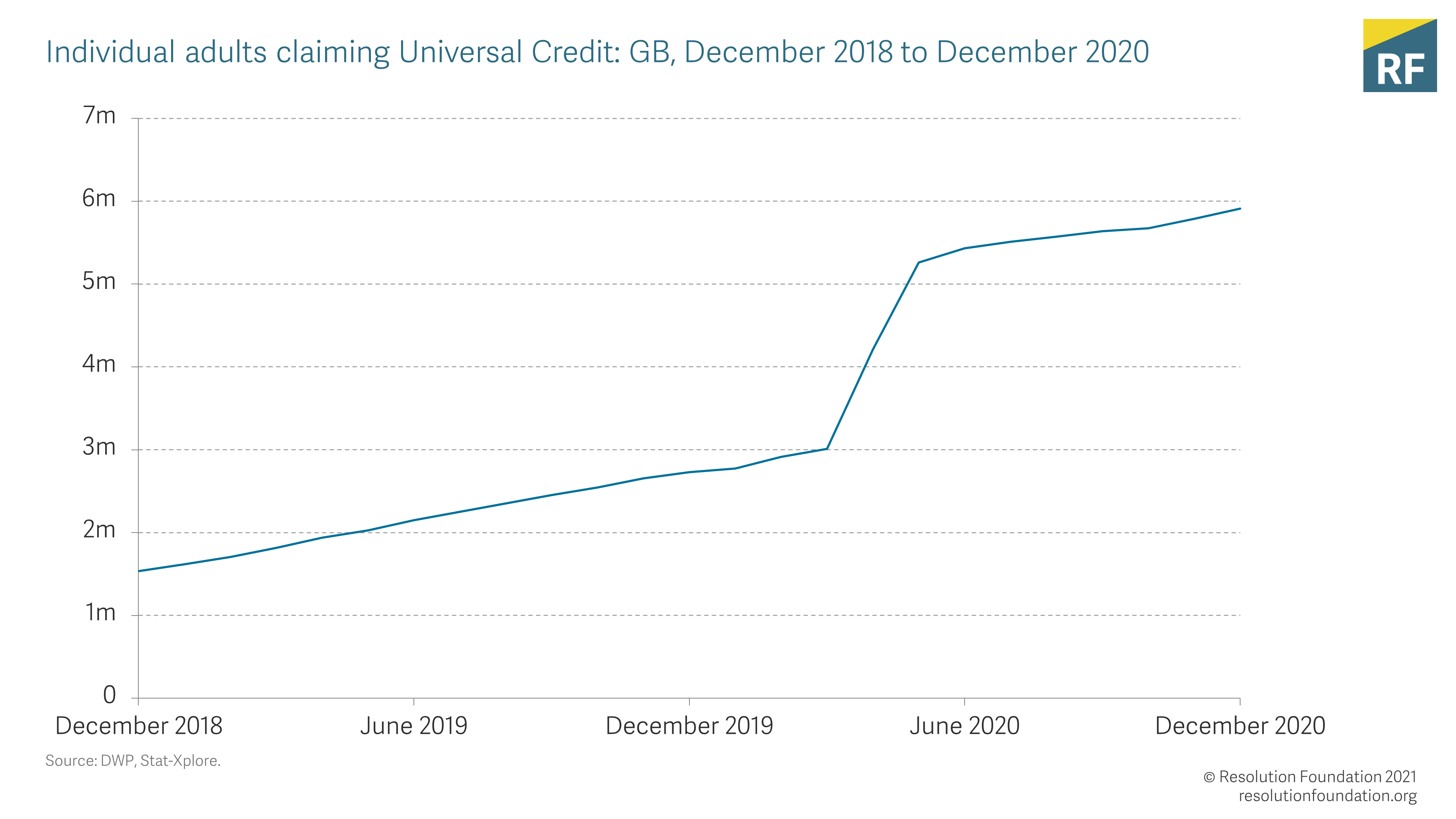 The surge in claims during March 2020 means that 60 per cent of adults claiming UC in December had been claiming for less than a year. Evidence from our survey, discussed more below, supports this, finding that about half of adults receiving UC in January – 46 per cent – started their current claim in March 2020 or later.

UC is an in-work benefit, and during the crisis it has been supporting not just those who lost their job altogether, but also those who lost income through being furloughed, or families where a two-earner couple became a one-earner couple. In fact, the fraction of adults claiming UC who are in work stood at 39 per cent in November 2020 (the latest data available), up from 36 per cent a year earlier.

Figure 2: The majority of the increase in Universal Credit caseload during the crisis was due to a rise in claims from single adults 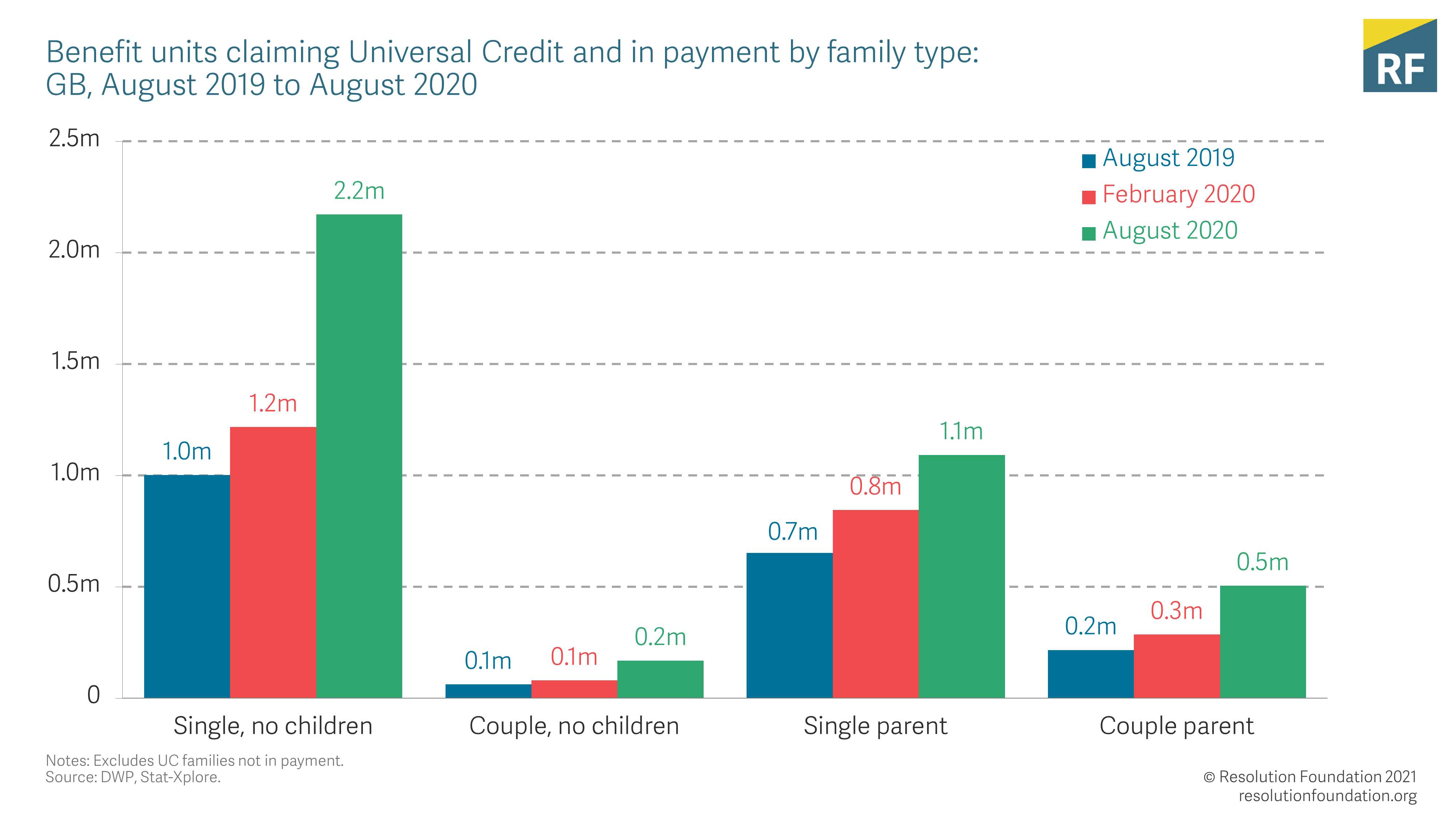 Families receiving UC can also receive help with housing costs, and, as Figure 3 shows, 2.3 million claims in August 2020 were also receiving additional elements paid to families who were renting, 0.8 million more than the situation in February 2020.

Figure 3: In the first months of the crisis, there were more than half a million new Universal Credit families living in the private rented sector 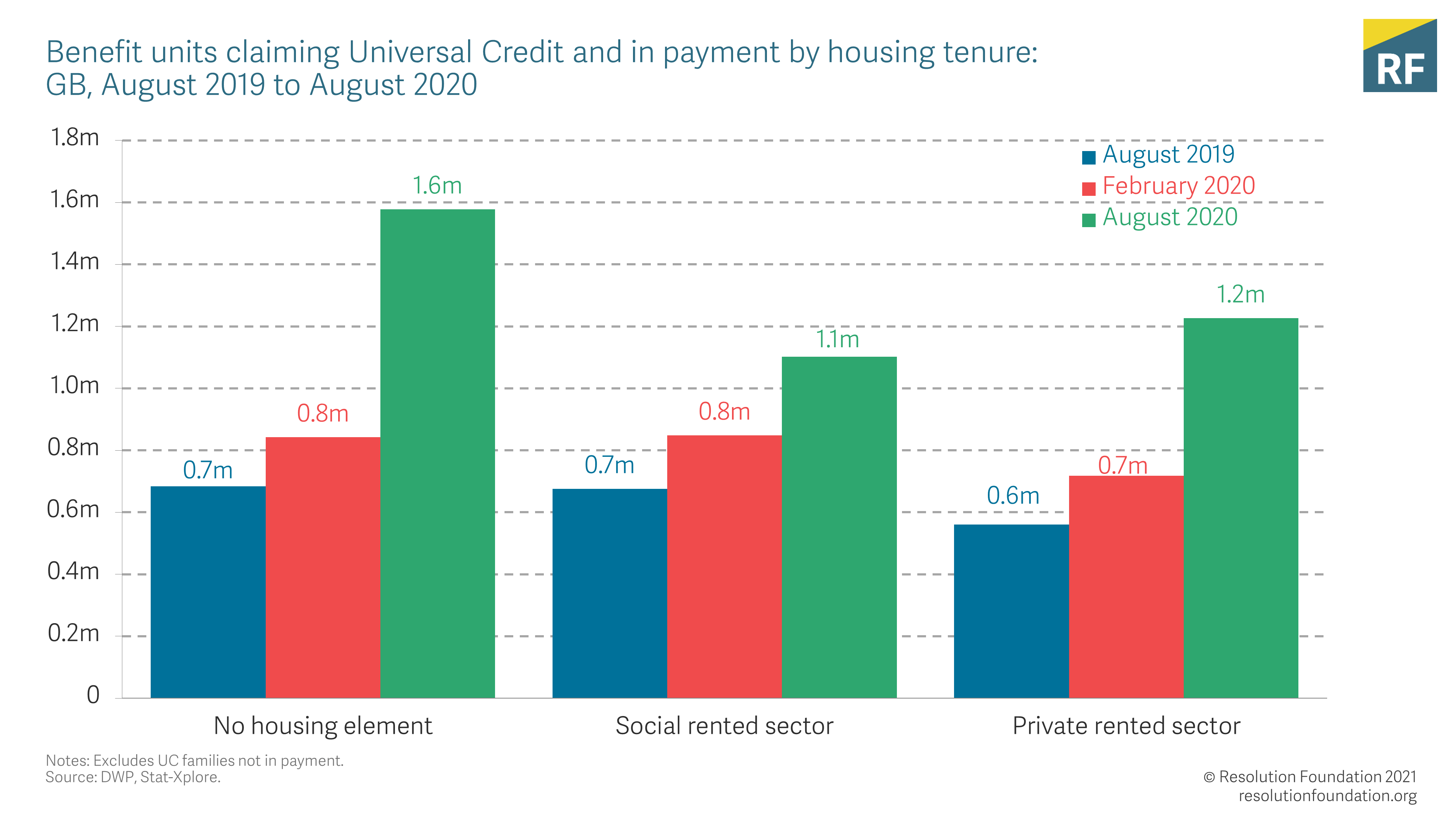 The remainder of this Spotlight uses data from our online survey we commissioned in January 2021.[iii] In the analysis below, we have focused on characteristics and outcomes that are measured at the family level (technically, the ‘benefit unit’), and we describe the analysis as being about ‘UC families’. Because of this, we have reweighted the data so as to avoid over-representing couples on UC.

In our survey, we asked respondents to tell us how their disposable income (and their partner’s, if they lived with them) had changed since the pandemic began. Some 45 per cent of families who were new to claiming UC (i.e. their UC claim had begun in or after March 2020) said that their disposable income – including their UC payments – had fallen by at least a quarter from its pre-pandemic levels (see Figure 4).  In fact, data from those families who were able to estimate their income in both February 2020 and January 2021 shows that at least 34 per cent of new UC families in our survey had seen income falls of more than 40 per cent, close to the level found in previous research by the IFS using bank account data.[iv] The Figure also shows that just over one-in-five of existing UC families reported income rises since February 2020: we would expect to see some increases, given the £20 a week increase in UC payments from April 2020. 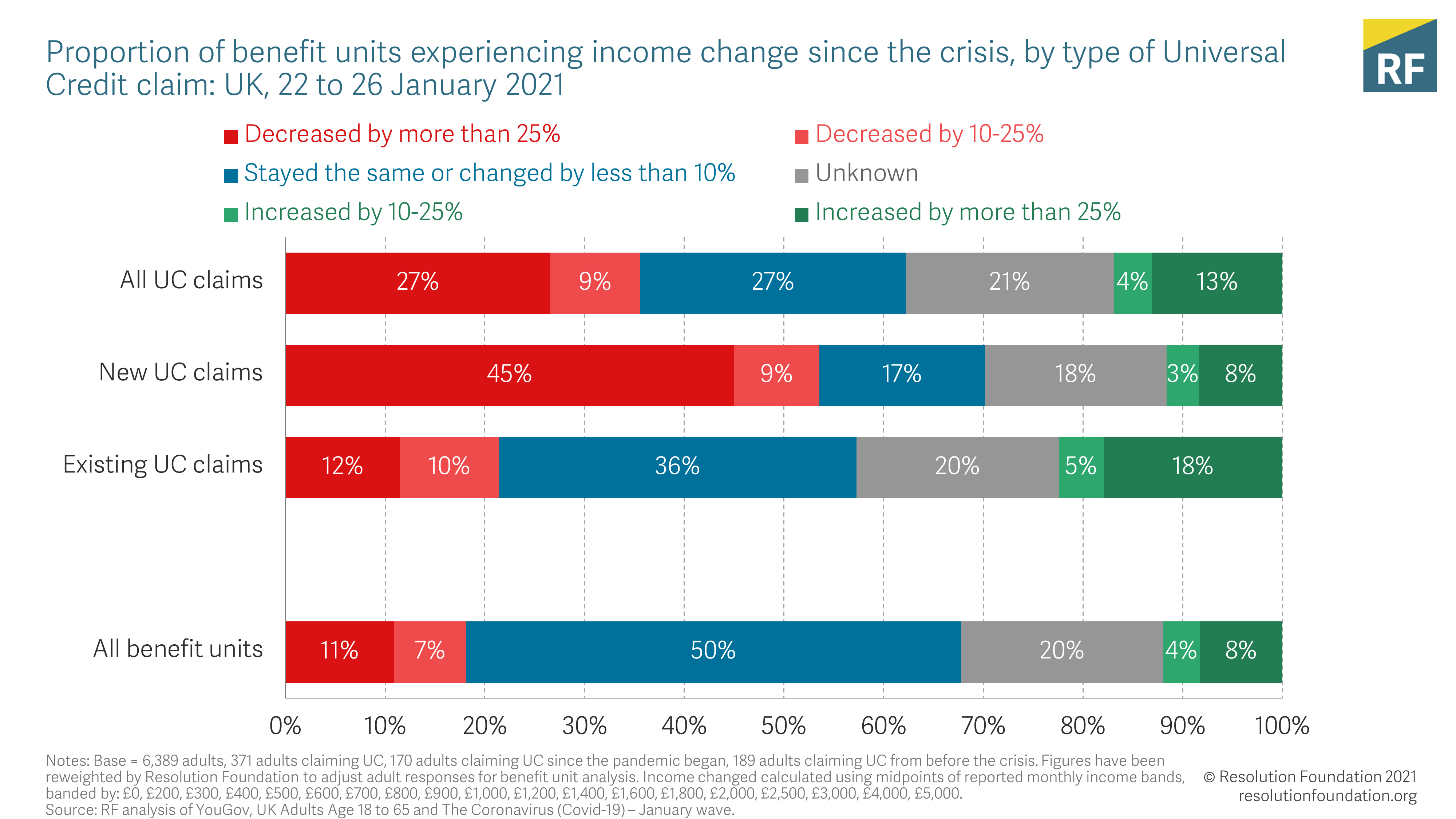 Without UC, families would be left to rely on their savings, accumulate debt, rely on charity, or otherwise face destitution. Our survey found that a third of new UC families had no savings at all before the crisis hit (Figure 5). The Figure also shows that 6 per cent of families newly claiming UC had savings above £16,000, which shouldn’t be possible given the capital rules in UC.

Figure 5: A third of new Universal Credit family claims had no savings before the crisis began 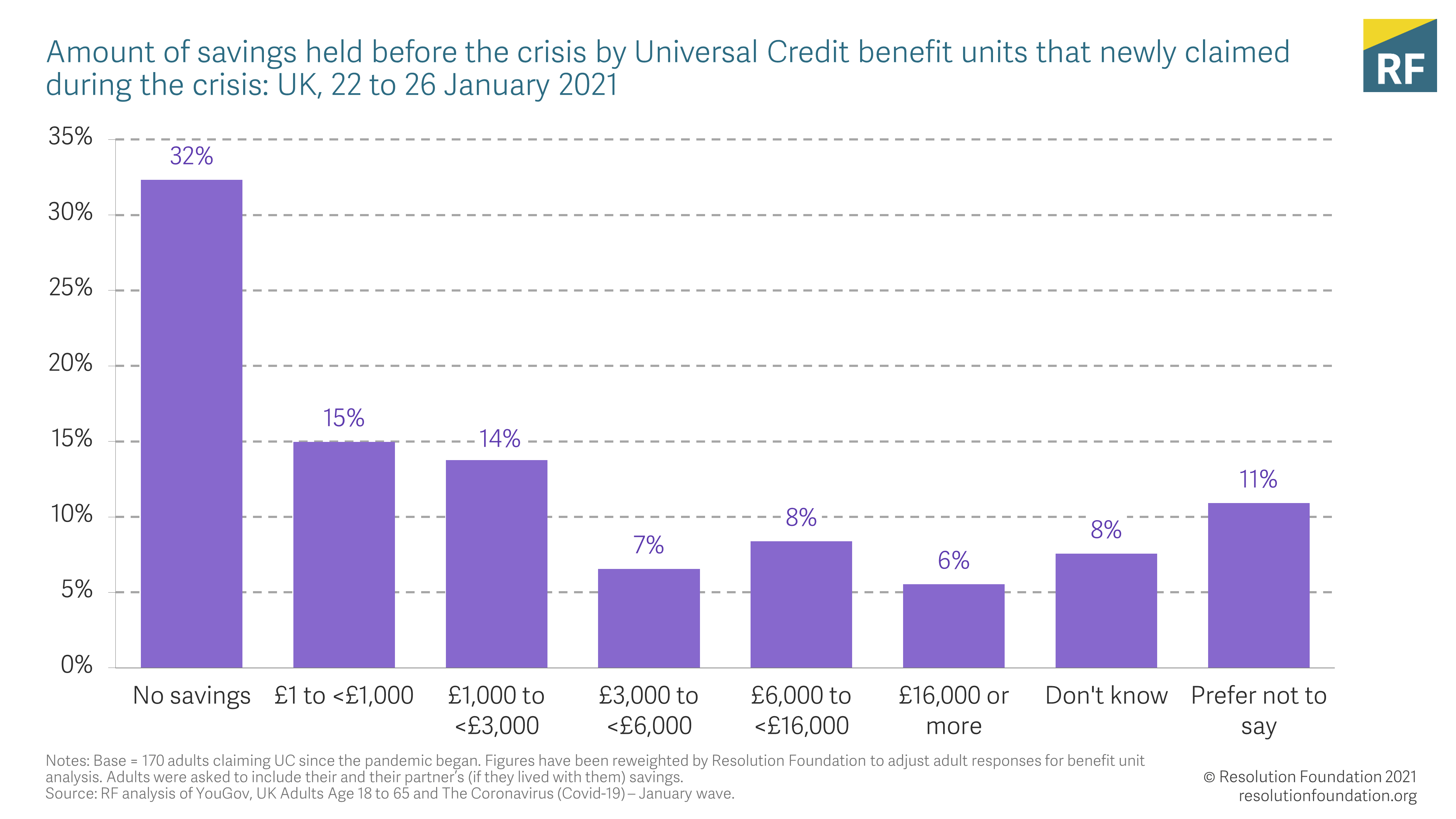 Even with the support that UC provides – and the savings that some new UC families could rely on – one-in-five UC families in our survey (21 per cent) have fallen behind on their essential (non-housing) bills during the crisis (Figure 6).This measure deliberately excludes any housing arrears that may have been accumulated, which we will look at in forthcoming work. Among UC families whose claims pre-dated the crisis, one-in-four were also behind on their bills (24 per cent).

Figure 6: Over one-in-five new and existing Universal Credit families fell behind on essential bills during the crisis 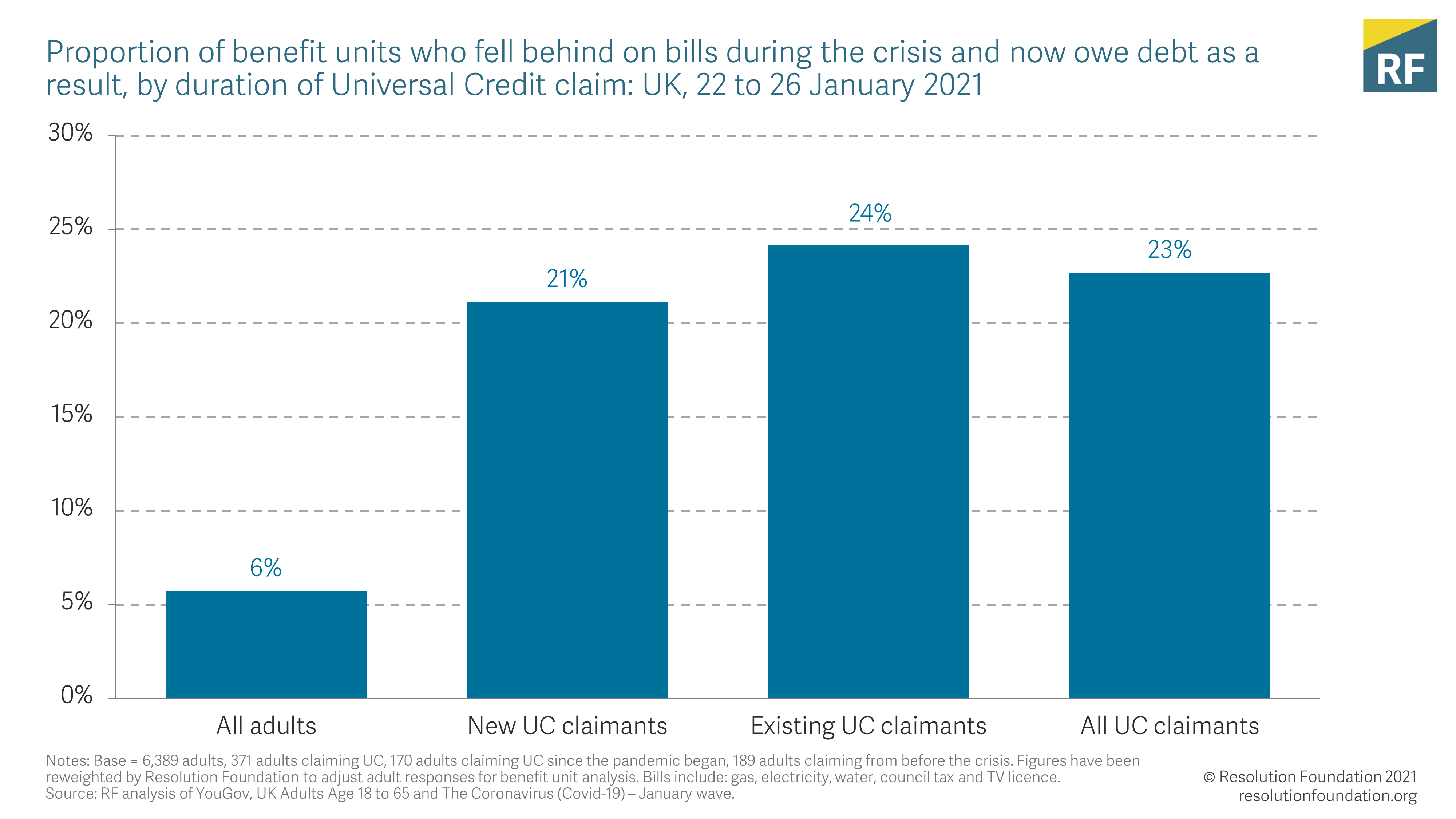 As a result, three-in-ten (31 per cent) of all UC families in our survey said that they were more in debt now than they were in February 2020 (including 7 per cent of new UC families who have fallen into debt when they previously were debt-free). This compares to just 13 per cent across all families (Figure 7).

Figure 7: Existing and new Universal Credit families were more than twice as likely to see increasing levels of debt 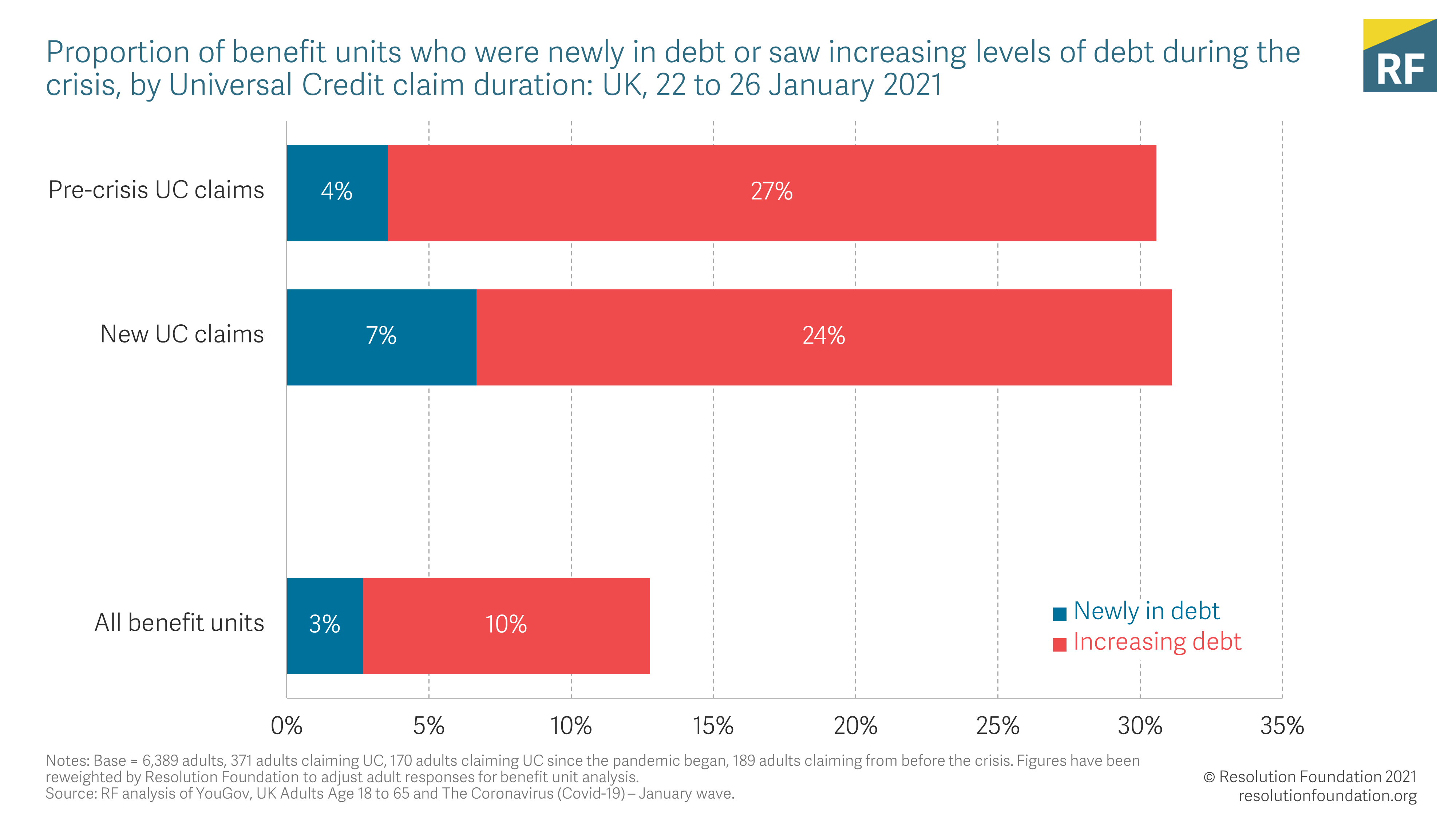 We also asked respondents to look ahead to the three months up to the middle of April. Figure 8 shows that 14 per cent of new UC benefit units said that they expected to regularly or occasionally fall behind with their bills and credit commitments in that period, and just under a half (48 per cent) said that they would be able to cover their essential bills, but that it would be a struggle, much higher than the economy-wide average of 27 per cent. In total, 61 per cent of UC families say they will struggle to keep up or will fall behind on bills, around twice the proportion of families across the economy as a whole (31 per cent).

Figure 8: New Universal Credit families are four times less likely to be able to cover their bills with ease in the next 3 months 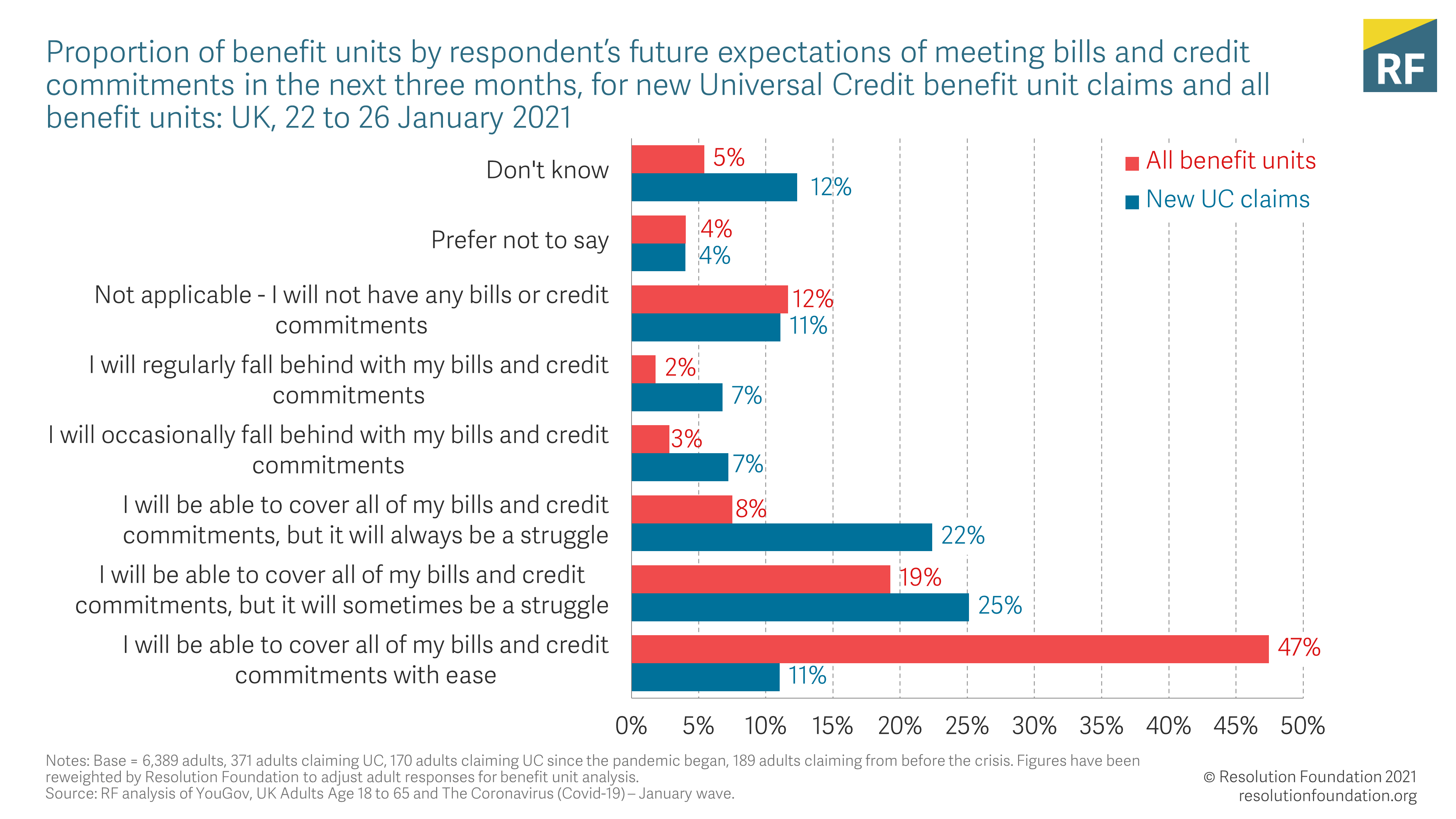 The strength of the economic recovery is central to the pace of the living standards recovery – including whether we can move a post-Brexit and post-Covid UK onto a path of faster productivity growth – but its shape, including, crucially, how it is experienced by low-to-middle income households, will be dominated by the immediate decision facing the Government on whether to extend the £20 a week rise in UC and WTC.  Removing £1,000 a year from over 6 million families at a time when unemployment is set to reach its peak represents poor macroeconomics, as well as being devastating for the finances of families on a low income, many of whom, as we show here, have little or no savings, and are struggling to keep up with essential bills. Coming on top of recent work showing that the pandemic, and lockdown in particular, has made life more expensive for those on a low income, continuing the uplift is the only right thing to do.

[iv] About one-in-five respondents could not give us this information, but we have included them in the denominator, so the true proportion could be higher.