This is the eighth and final edition of our roundup of timely indicators of the impact of coronavirus. This series has aimed to plug the gap left by traditional measures of economic activity which are not timely enough to capture these effects. However, we are now at the point when official data covering the lockdown period is being available (see, for example, the GDP section below), so our focus will turn to analysing this data. We will continue to use the indicators published in this series as a cross check to official data which are subject to unusually high data uncertainty.

Despite just seven working days of lockdown in the first three months of 2020 the country has seen the biggest quarterly economic contraction since the financial crisis and the weakest single-month change on record. Almost every sector has contributed to this contraction. With full or partial lockdown set to be in place for all of Q2 2020 (April-June), GDP will fall much further in the second quarter.

The flow of new Universal Credit claimants has slowed significantly in recent weeks but remains more than two times the pre-crisis level. Were it not for 7.5 million jobs now covered by the Government’s Job Retention Scheme these numbers would be far higher. Even so, it is probably not a huge surprise that recent survey evidence suggests people have become more pessimistic about the country’s economic situation. There was better news on household finances, though, with respondents saying they were more optimistic about the future. Elsewhere, new data shows that flights, shipping and fishing activity have all continued to fall. And the Government has raised £80 billion in new borrowing since mid-March without a deterioration in financial market performance. A key question remains whether this will continue once the Bank of England gilt purchases end at the start of July.

This week the first official estimate of economic activity (GDP) partially covering the country’s lockdown was released. In the first three months of this year, the UK experienced the sharpest economic contraction since the peak of the financial crisis (Q4 2008). That’s despite the lockdown officially only starting on the 23 March. The 5.8 per cent single-month fall in March was the biggest on record (since 1997), and with the lockdown coming into full force only in the final week of March, that single-month fall suggests a GDP contracted by around 20 per cent during the lockdown period. The contraction of 2 per cent in Q1 2020 is larger than that anticipated by the average of HM Treasury’s panel of independent forecasters, though smaller than included in the Bank of England’s Monetary Policy Report last week.

GDP will fall much further in Q2 as the UK looks set to be on full or partial lockdown throughout. Reliable timelier indicators, such as the Purchasing Managers’ Index, have already confirmed that activity has fallen much further in April. The low level of economic activity is likely to persist throughout May and June; the Bank of England and OBR scenarios pencil in falls of 25 per cent and 35 per cent respectively.

Figure 1 shows the contribution to 3-month-on-3-month growth in GDP by industry. Almost every sector saw a fall in GDP in Q1, with wholesale and retail, hospitality and transport and communications making the biggest contributions. The only positive contributions to GDP in Q1 2020 came from real estate and public administration (which are captured in Other services). As we have commented elsewhere, this crisis has impacted all parts of the economy, but there are some sectors and workers bearing more of the economic risk.

Figure 1: All sectors of the economy contracted sharply in March 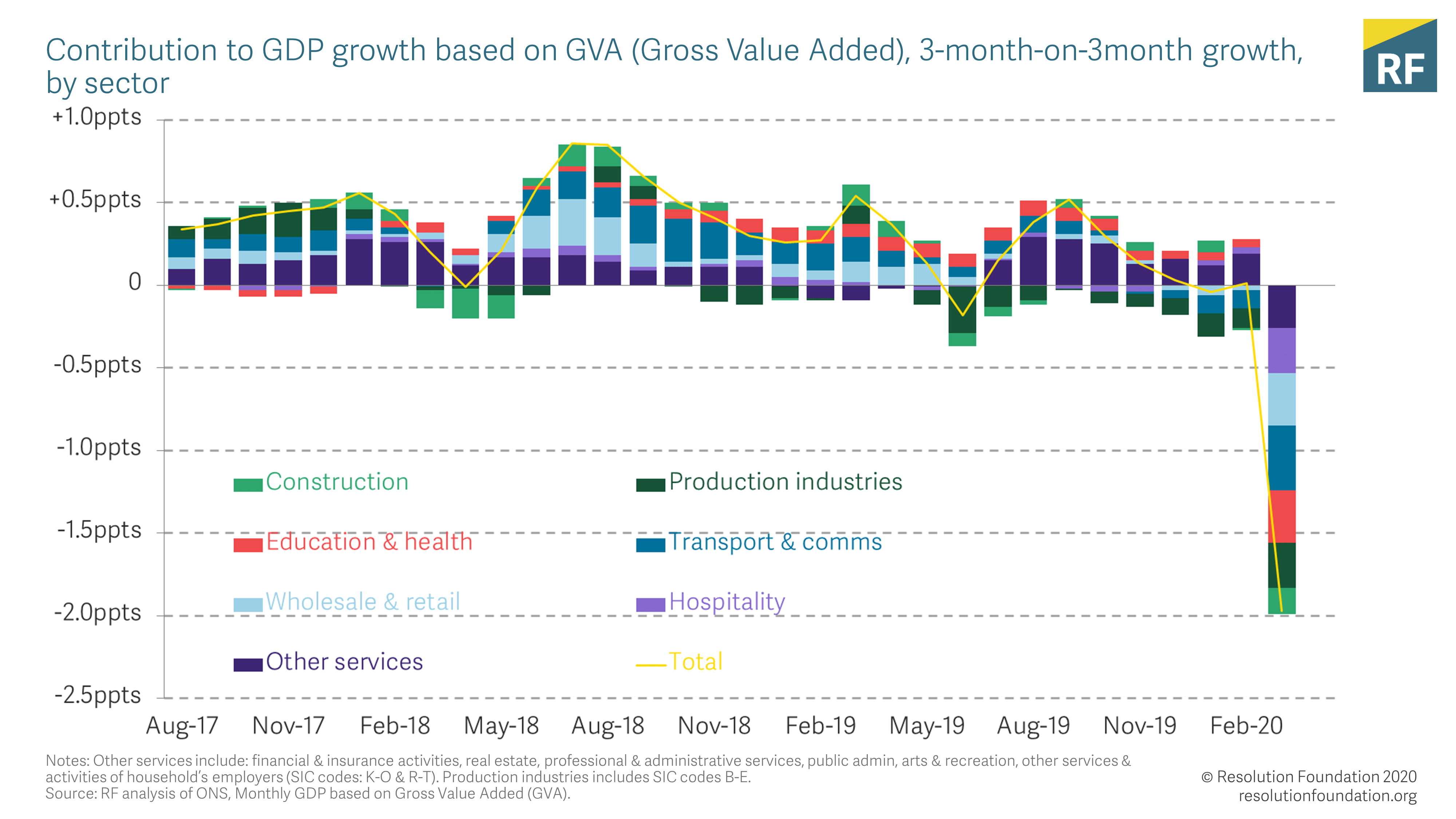 The scale of the current jobs crisis has become much clearer in recent weeks: unemployment is still rising, albeit at a slower pace. Over two million new claims for benefits have been made since mid-March, despite the Government Job Retention Scheme (JRS). The number of new Universal Credit (UC) claimants peaked at 100,000 per day, as shown in Figure 2, but claims remain elevated at more than double the pre-crisis level. That’s around an extra 20,000 claims per day. In comparison, the peak of the financial crisis only saw an extra 7,000 average daily claims to Job Seekers Allowance. 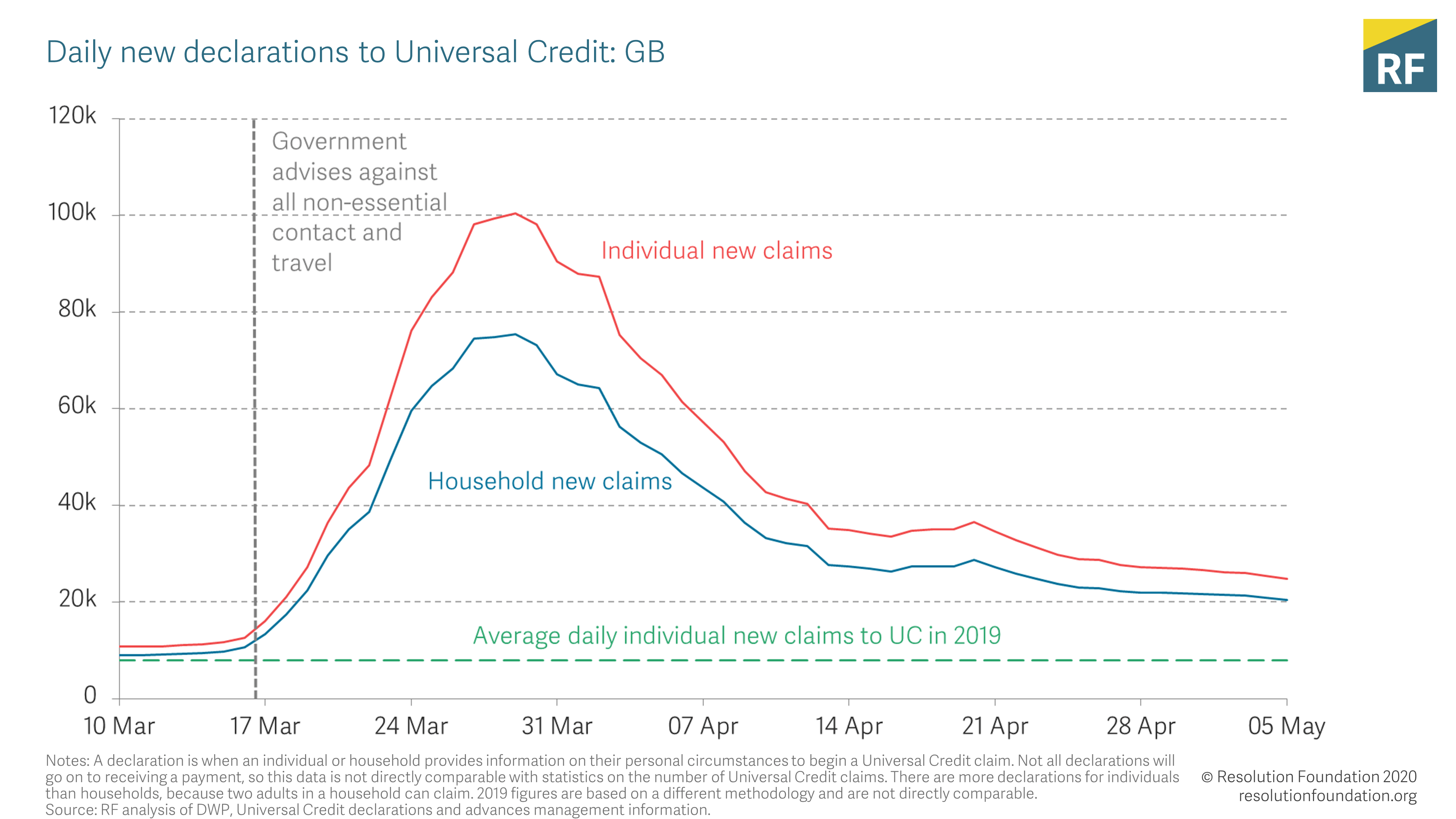 The current labour market crisis is unique in that it has primarily been driven by people leaving their jobs rather than reduced hiring. This is why the JRS has been so important in preventing even faster rises in unemployment, while helping to cushion falls in household incomes and allows workers to remain connected to their employer (which should support a faster economic recovery as soon as workers can go back to their workplace safely).

The scale of uptake for the JRS has been extraordinary. As Figure 3 shows, 7.5 million jobs have been covered since the scheme opened on 20 April, almost a quarter of all employees, with around 935,000 businesses using the scheme. A further 440,000 claims have been made on the first day of the Government’s Self-Employment Income Support Scheme. HMRC have said that £10.1 billion worth of claims have been made so far on the JRS and £1.3 billion on the self-employed scheme. The Office for Budget Responsibility (OBR) estimate that the JRS will ultimately lead to £58 billion of government borrowing.

But without the JRS many of those furloughed would have become unemployed, incurring substantial welfare costs as UC claims rose even higher – leaving many more families with even larger income reductions. With an unemployment crisis looming, and the sectors that usually drive employment recoveries hardest hit, recent Resolution Foundation work has argued that it is vital that the reforms for the next phase of the JRS should be based on the timetable of the lockdown policy.

Figure 3: 7.5 million jobs are now covered by the furlough scheme 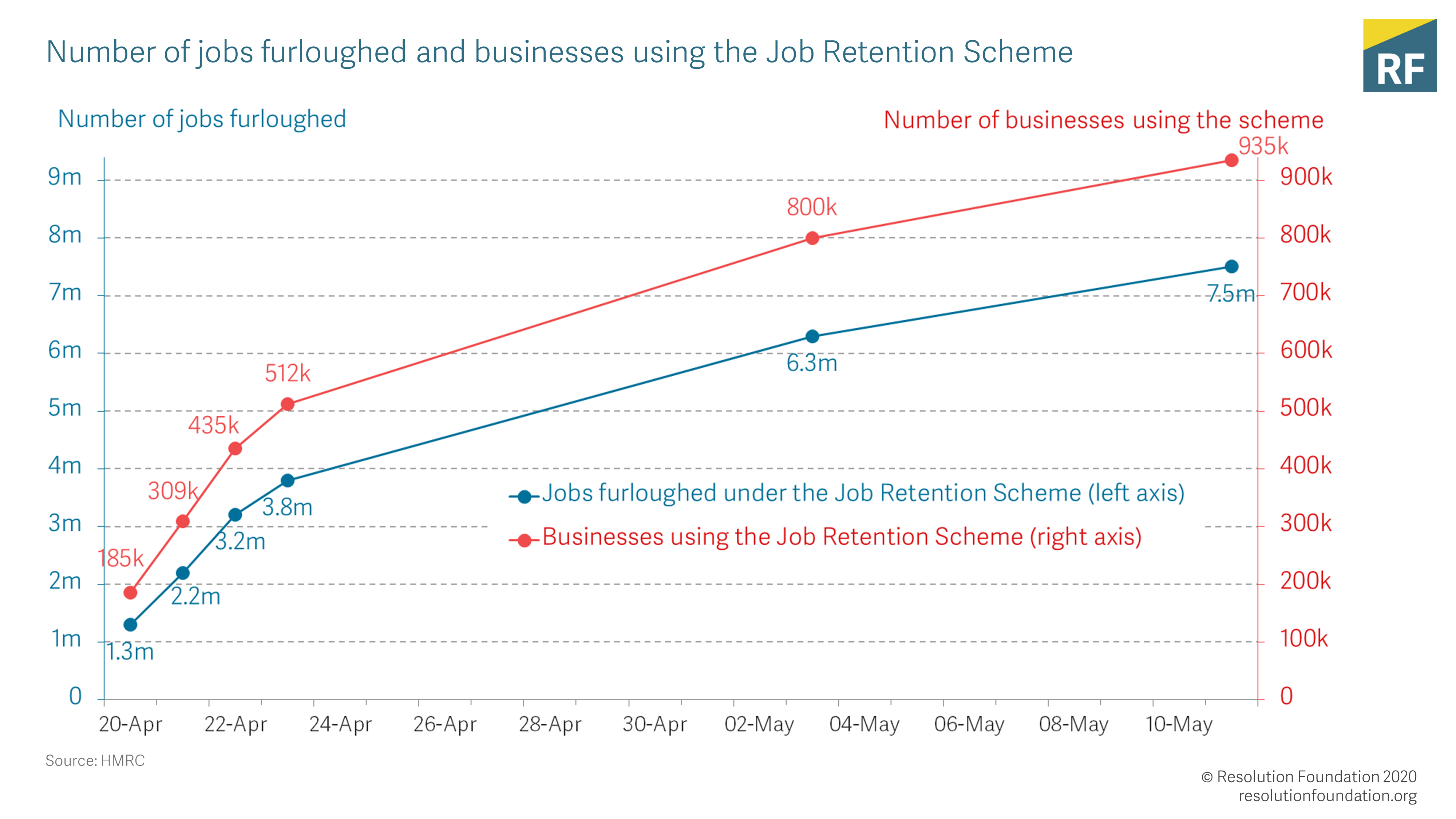 Despite unprecedented government support, financial wellbeing has deteriorated drastically. The latest IHS Markit Households Finance Index shows the largest fall in overall perceptions of financial wellbeing since the survey began in 2009. UK households reported a severe drop in job security and a decrease in earnings from employment in April. This is consistent with UK consumer confidence dropping sharply to levels not seen since the 2008 financial crisis.

Interestingly, there is a marked divergence between households’ expectations about their personal finances compared to perceptions of prospects for the economy as a whole. Figure 4 shows that 55 per cent of respondents expect the general economic situation to get a lot worse in the next 12 months compared to just 8 per cent who expect the financial position of their household to get a lot worse.

Household expectations for the future of the economy and personal finances are an important driver of economic activity: more pessimism leads to higher precautionary saving by households and weaker near-term economic activity (e.g. consumption). These results highlight that to achieve an economic recovery it will be necessary for the Government to improve economic confidence, facilitated by a successful response to the health crisis.

Figure 4: Expectations of the general economic situation are low 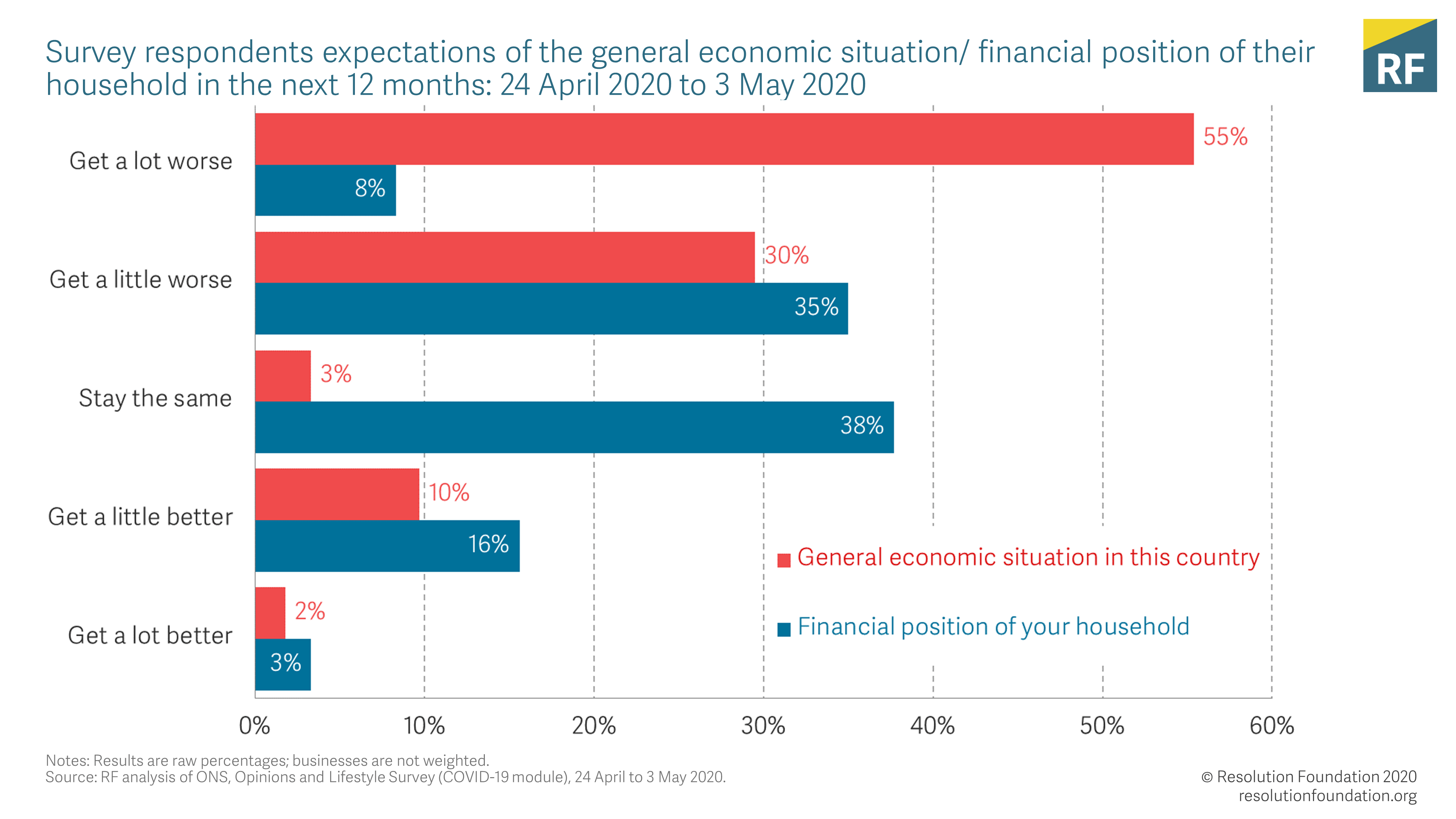 Weekly data on shipping volumes have shown gradual falls in the number of visits to UK ports (Figure 5). Flight traffic, which has been directly affected by travel restrictions, has fallen more sharply: Heathrow’s traffic fell by 97 per cent in April compared with the same month last year; and air cargo volumes are down 62 per cent. The World Trade Organisation has estimated that global trade is likely to fall between 13 and 32 per cent – larger than the falls during the financial crisis when world trade fell by 12 per cent from peak to trough. Reductions in global trade would typically be accompanied by slower productivity growth which could limit the ability of the economy to rebound quickly.

It’s not just shipping and flights that have tapered off. According to the Global Fish Watch database of fishing activity, relative to 2018-19, global fishing activity is down 6.5 per cent and 10 per cent since the World Health Organisation declared Covid-19 a pandemic on March 11. These figures represent changes in industrial fleets – that is, boats over 24 meters – and do not capture smaller fishing operations. It is these small-scale coastal fisheries that comprise almost 80 per cent of the English fleet. The Government has already committed £10 million to the country’s small-scale fisheries to help ameliorate the negative impacts of the current crisis. 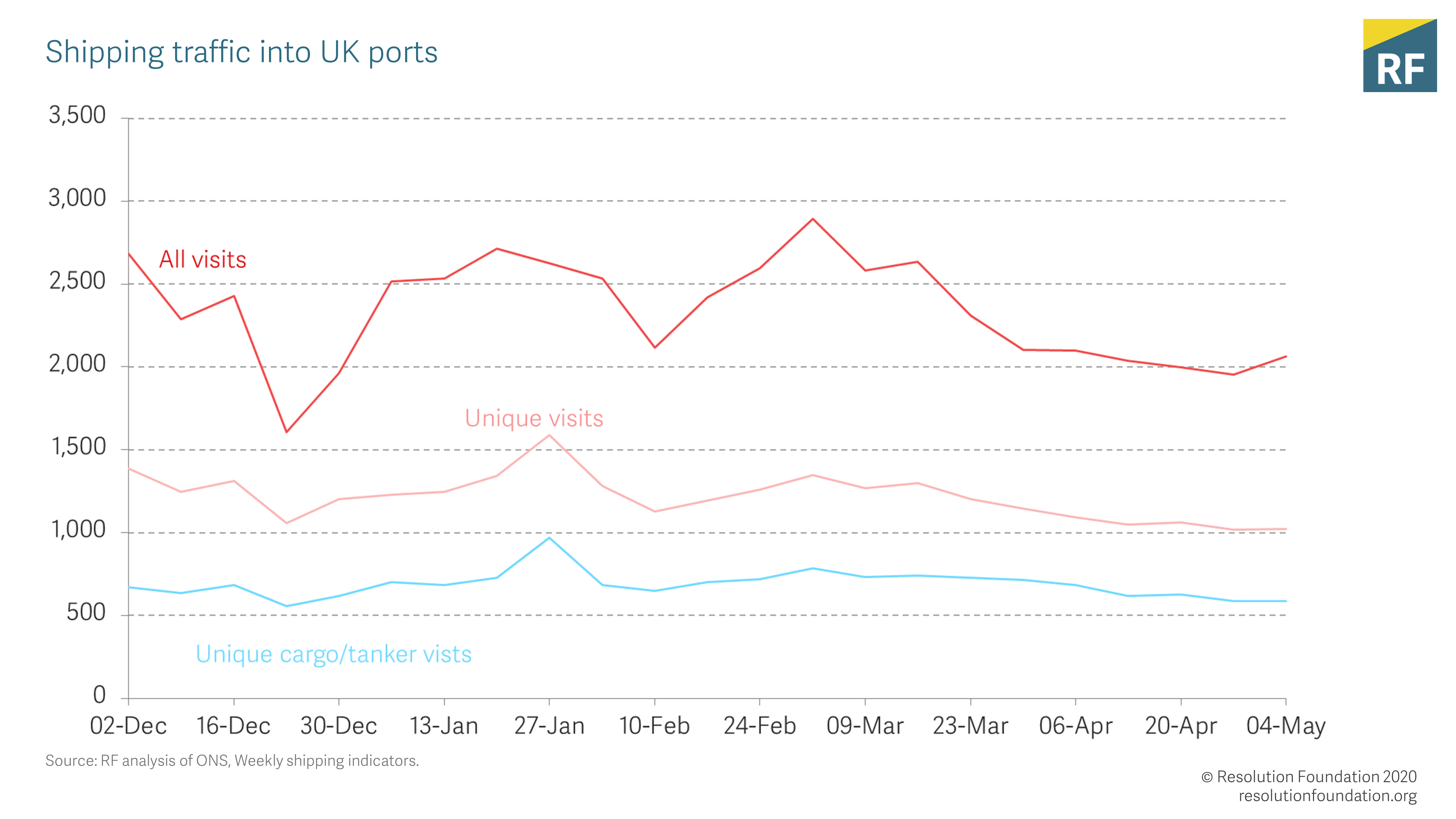 The OBR revised up its estimate of public sector net borrowing for 2020-21 (based on a three-month lockdown scenario) from £273 billion to £298 billion. This would be the highest amount of government borrowing, as a share of the economy, since the Second World War.

So far, the Debt Management Office (DMO) has successfully raised £80 billion from gilt auctions since mid-March, without a deterioration in market indicators of demand. For example, as Figure 6 shows, the cover ratio (the ratio of financial market bids for bonds to the amount of debt issued) has averaged above two since early March, although it has fallen slightly since early April. Another metric of auction success, the yield tail (a measure of the range of bid prices where a larger spread indicates weaker demand), has remained low.

A major driver of the sanguine market reaction has been the Bank of England’s purchases of gilts as part of its recent expansion of its quantitative easing (QE) programme. The Bank announced in March that it would purchase £200 billion of gilts. Since then purchases have run slightly ahead of debt issuance by the DMO, as shown in Figure 7. The Bank is now slightly over half way through its additional gilt purchases and will likely hit the new limit around the start of July. At that point, if the Bank does not extend its QE programme, financial markets would have to absorb the additional borrowing. For this reason, many expect the Bank of England’s Monetary Policy Committee to announce an extension to QE at its next meeting on June 18. 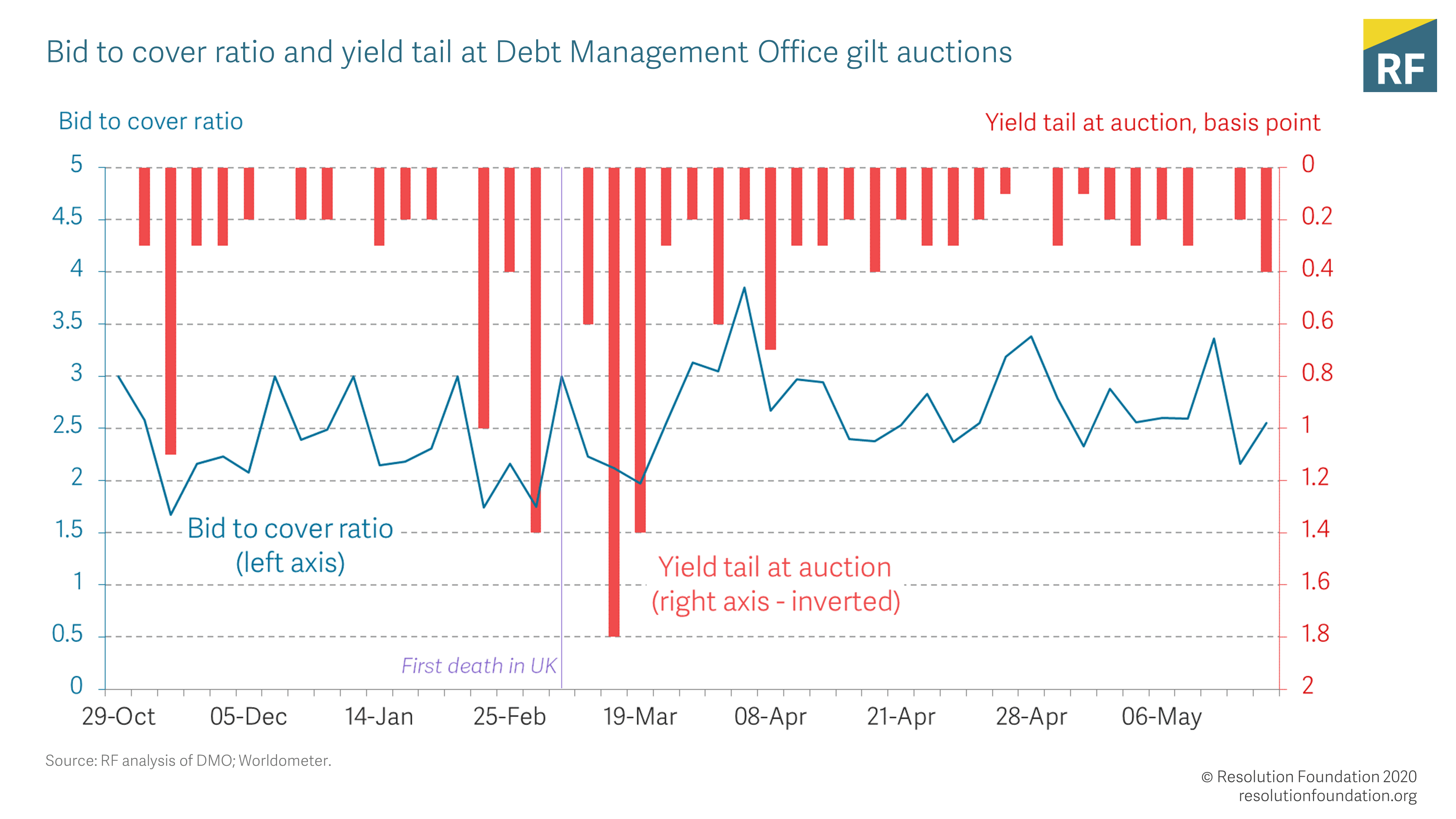 Figure 7: QE purchases have run ahead of debt issuance 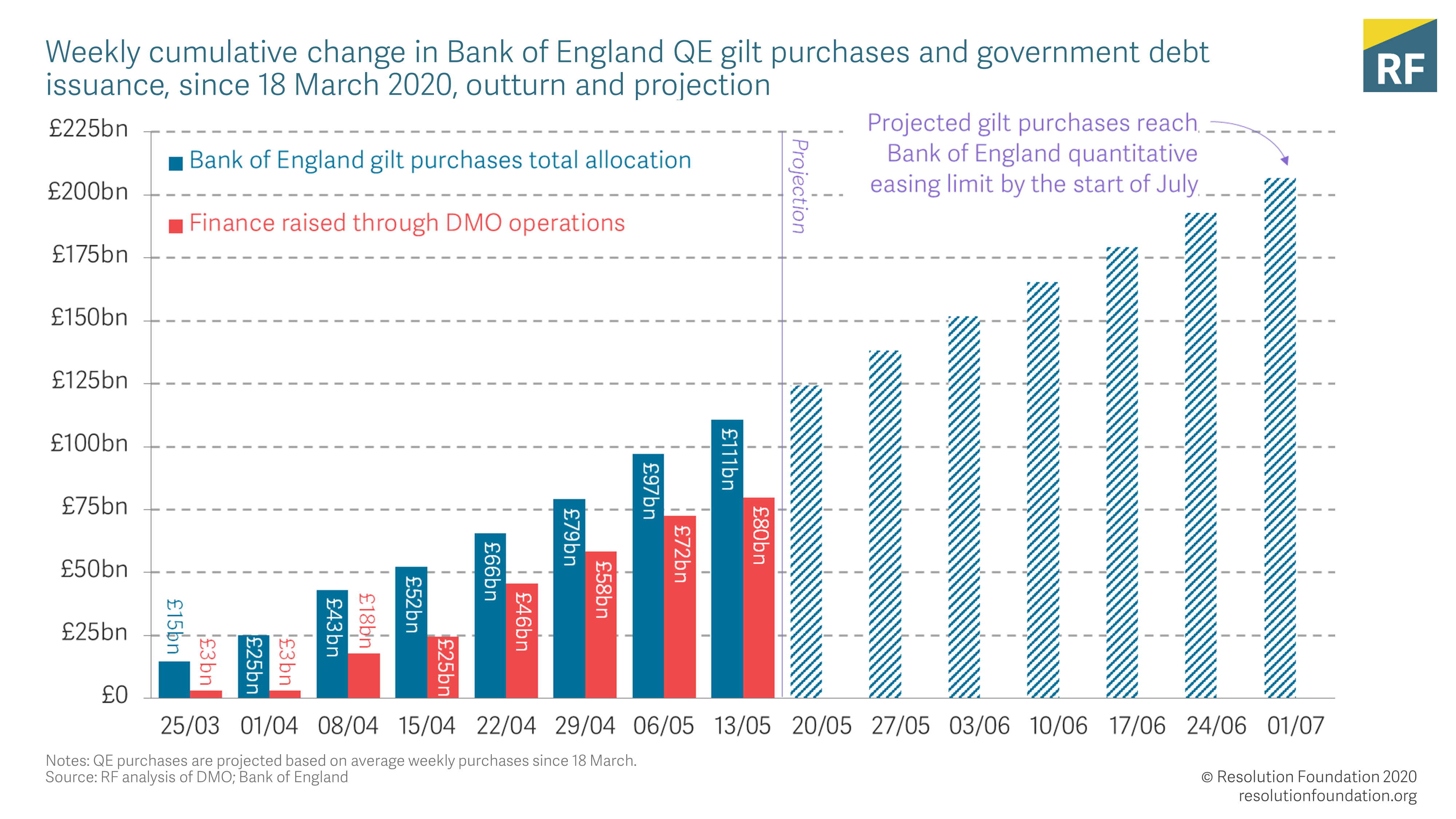