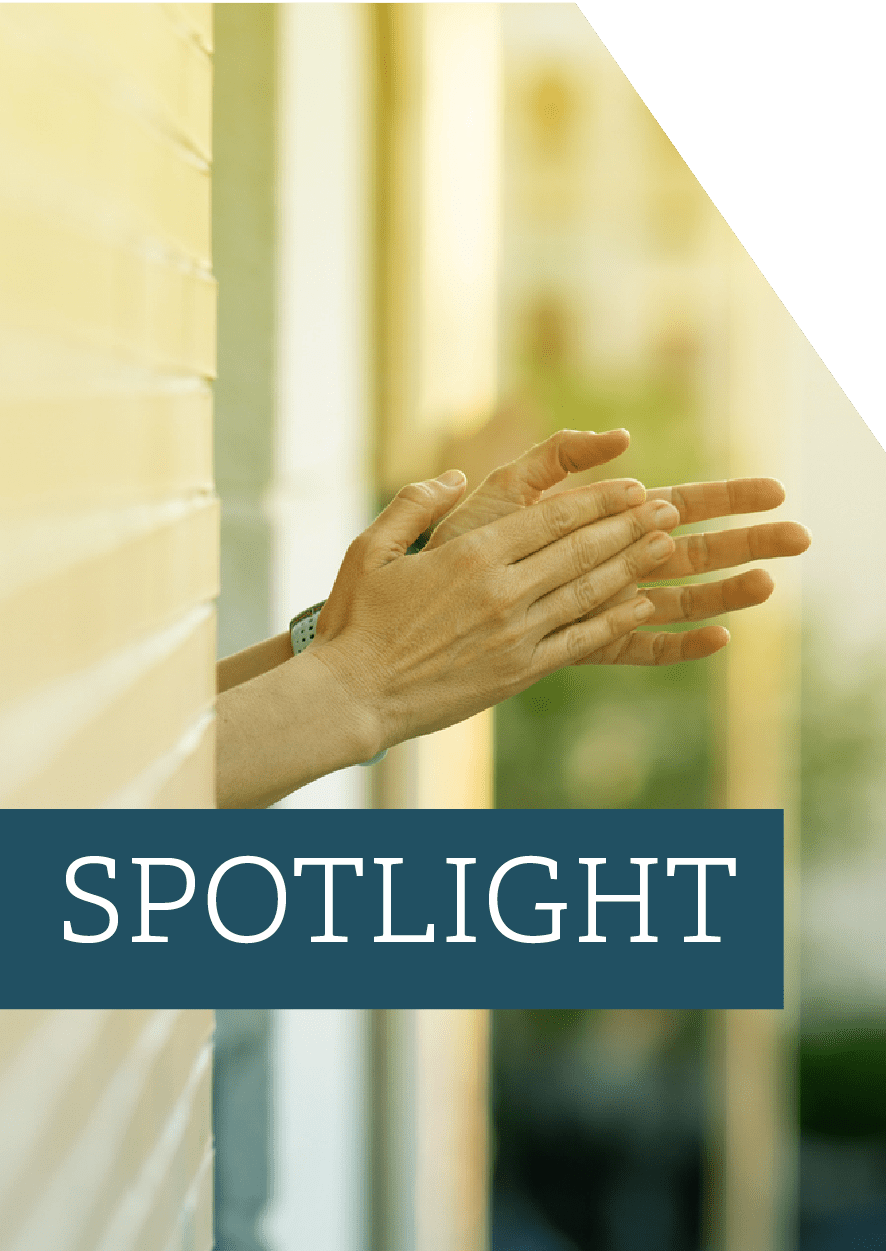 The nation has rightly come together in the current crisis to express support for our care workers. But how do we normally treat the social care workforce? Due to both long-standing and nearer-term decisions and trends, frontline care workers are: underpaid, with around half earning less than the real Living Wage; particularly vulnerable to being paid below the legal wage floor; and experience significant job insecurity, being four times more likely than average to be employed on a zero-hours contract.

The clapping is welcome, but care workers need better pay and conditions too. Achieving these goals – for example by ensuring the real Living Wage is paid across frontline care – will require both political resolve and the requisite funding, given we’re talking about a largely publicly funded sector that has been through years of austerity. Better pay and conditions in care should have long been a priority given the vital role care workers play in protecting the vulnerable. Delivering these things now is the least we can do.

The nation has come together to express gratitude to those frontline care workers who are currently putting themselves in harm’s way to help our most vulnerable. The question now arising is whether this gratitude and heightened respect will be translated into something more tangible when we come through this crisis.

Answering this question requires us to shine a spotlight on the state of the nation’s social care workforce. For decades it has been said that those who care for the vulnerable are overlooked and underpaid. More recently, already poor workforce conditions have been squeezed further due to a combination of rising demand for care from our ageing population, and a sustained squeeze on public funding.

The sheer scale of low pay in the sector, and the intensity of the insecurity faced by the workforce, is still under-appreciated by the broader public. The current pandemic – and our acute reliance on key workers such as those working in care to help us get through it – is an important prompt for the issue to return to public attention.

The social care workforce is large, low paid and insecure

Despite social care being perhaps much less salient in people’s minds than the NHS, its workforce represents a significant part of overall public service employment (even though it is delivered largely via the private sector). There are approximately 900,000 people working in frontline care roles in the UK as their main job, and approximately one million in total if we add those doing care work as a second job – with other data suggesting higher numbers still.[i] As Figure 1 shows, this is a predominantly female workforce (83 per cent of frontline care workers are women), with disproportionate BAME representaion, and includes many who have caring responsibilities of their own (one-third are parents and one-in-seven are single parents, for example). 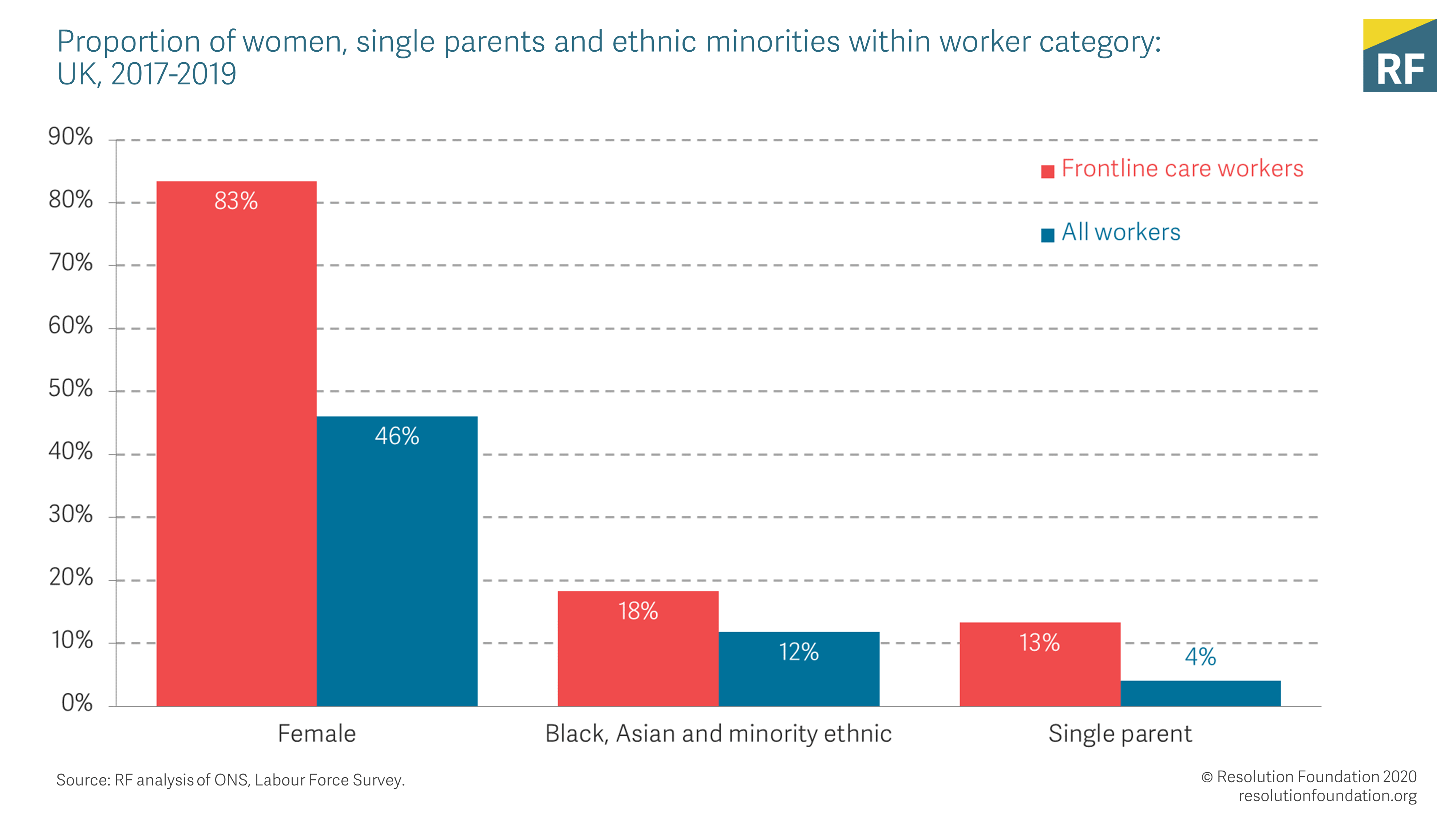 The cocktail of rising demand for care and reduced funding has put further pressure on what was already a low-wage sector. Meanwhile, a fast-rising wage floor from the introduction of the National Living Wage has pushed in the other direction and squeezed margins and pay distributions further. Despite this fast-rising legal wage floor that will have benefited the lowest-paid care workers, a very large proportion still do not get paid the real Living Wage set by the Living Wage Foundation,[ii] currently £10.75 in London and £9.30 across the rest of the UK. Different datasets give different results, but if we look at our go-to official labour market surveys we find that approximately half of frontline carers are paid less than the real Living Wage. That figure is slightly above four-in-ten according to the Annual Survey of Hours and Earnings, and just below six-in-ten according to the Labour Force Survey, with reasons to believe that the true figure lies somewhere in the middle.[iii]

England is the worst offender out of the nations of the UK in terms of care workers being paid below the Living Wage, as Figure 2 shows. Scotland does noticeably better due to a different approach to care funding, and the fact that in 2016 the Scottish Government announced a commitment to ensure all social care staff are paid the Living Wage (a commitment recently followed up by a coronavirus funding boost). But the fact that labour market survey data still shows that a large minority of frontline care workers in Scotland fall short of the Living Wage demonstrates that challenges remain everywhere.

Figure 2: Care workers are better paid in Scotland than elsewhere in the UK 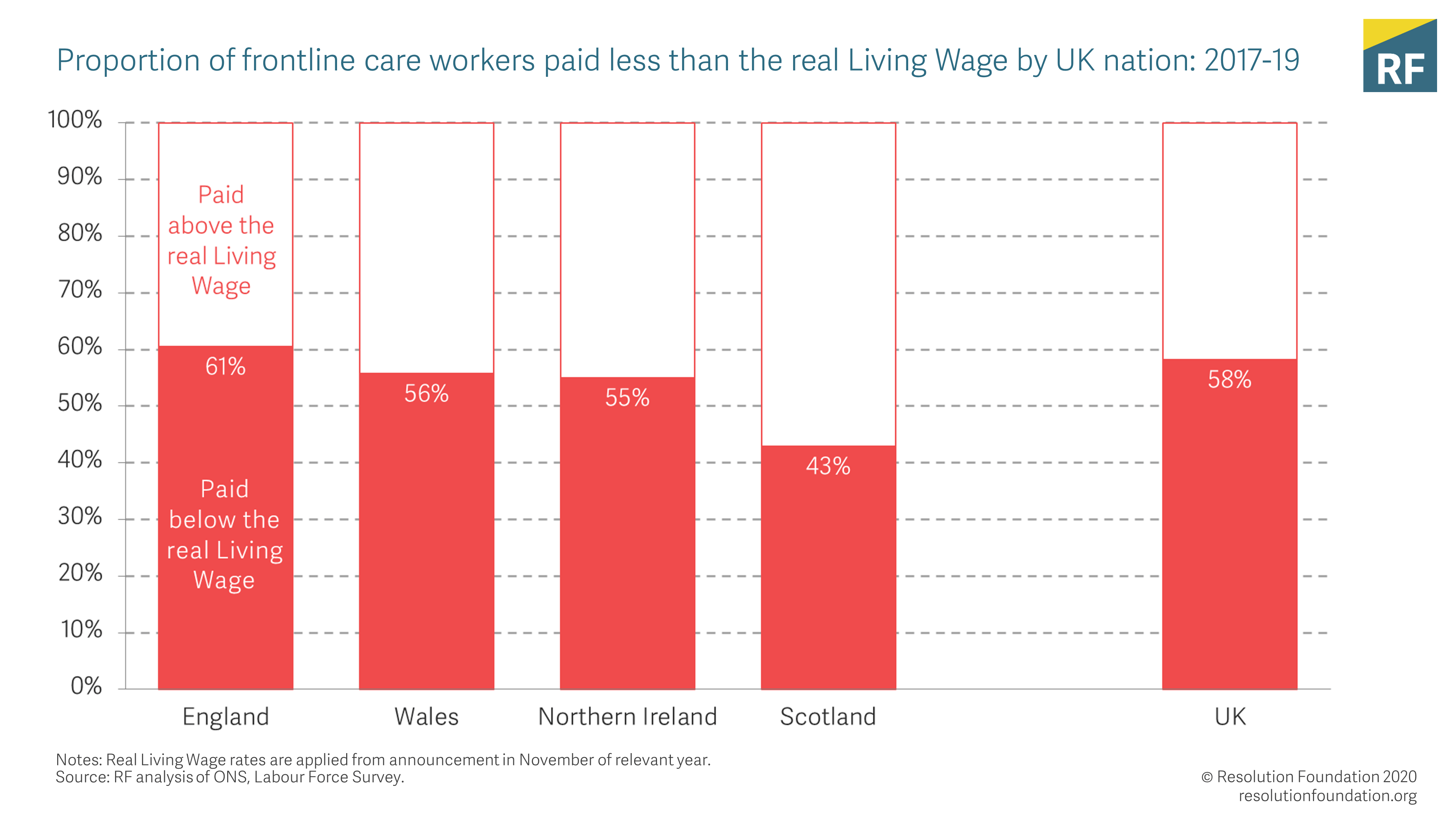 When it comes to frontline care workers working in the private sector (which is where most care workers are employed) the position is significantly worse: as many as two-in-three earn below the Living Wage threshold. Sector-led data from Skills for Care that zooms in on the lowest rung of frontline roles, and further hones in on the private sector in England only, suggests that nine-in-ten care workers in this group were paid below the Living Wage in 2019.

There is also a significant challenge of non-payment of the National Living Wage (the legal wage floor) in the care sector, not least because of the issue of compensating care workers for their travel time in domiciliary settings. Estimates vary very significantly, from roughly 20,000 to 160,000 care workers being underpaid their legal entitlement.

The issue of compliance is compounded by the often opaque nature of pay systems for care workers, and made more challenging still by the (welcome) move towards personal budgets for care recipients, and direct payments. Indeed, surveys of the workforce show that a clear majority have been unable to work out if they are being paid for all their hours of work.

When it comes to employment status and conditions, it’s clear that the sector relies on insecure working arrangements. Again, estimates vary between data sources, but the Labour Force Survey suggests that one-in-ten frontline social care staff are on zero-hour contracts, much higher than the one-in-40 in the economy as a whole. Again, Skills for Care’s sector-specific administrative dataset suggests a more extreme situation, with around a quarter of the workforce in England on this type of contract. As Figure 3 shows, frontline care staff are also about three times more likely than other workers to be employed through agencies. Turnover rates are also very high.

Figure 3: Frontline care workers are more likely to be on non-standard contracts 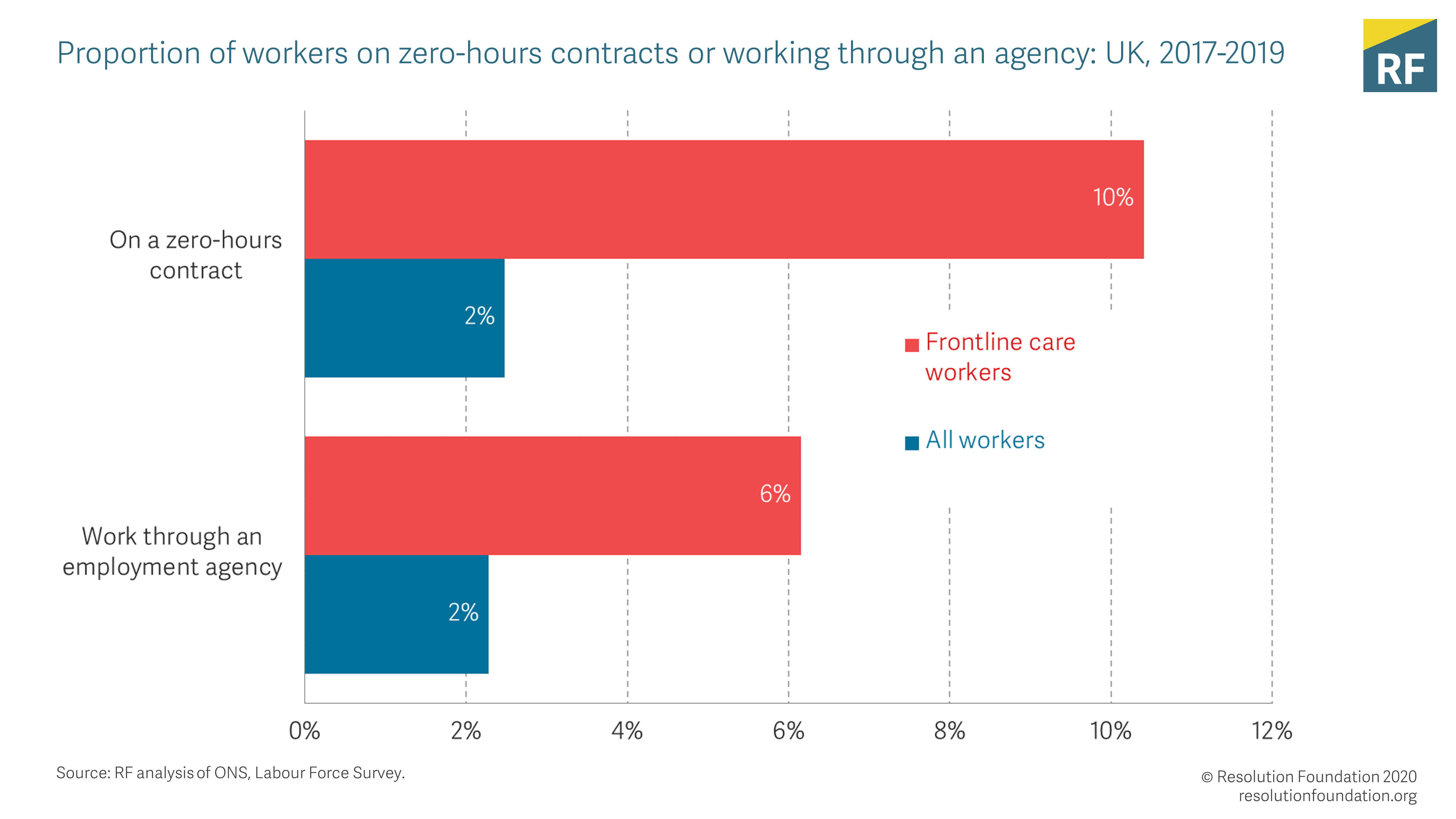 Insecurity has become a structural feature of working life in social care. Zero-hour contracts have not been used sparingly, but instead have become the new normal in many settings.

Better pay in social care will cost taxpayers, but would bring quantitative and qualitative benefits

The current crisis has thrown into sharp relief the moral case for properly compensating the vital work that the most vulnerable people in society rely on and, far from being ‘low-skilled’, requries a varied skillset. But we have to recognise that we can’t just wish that social care workers were paid more and leave it at that. This is a large sector heavily reliant on public funding, that has been through an era of sustained austerity and operates on extremely tight margins. The necessary funding to raise pay levels isn’t going to be found via efficiency drives or in other parts of local authority budgets. If pay is to go up, taxpayers or those receiving care will need to meet the cost. Resolution Foundation research in 2015 suggested that gross public care funding across the UK would have to rise by more than £1 billion to meet the cost of paying the real Living Wage across the adult social care sector.[iv]

But the true public costs of paying the Living Wage to care workers are unlikely to be anything like this high. The pervasiveness of low pay, together with the composition of the care workforce (many parents, mostly mothers, with dependent children), mean that a large proportion of the workforce relies on tax credits or Universal Credit. This has important consequences when it comes to the costs and benefits of raising pay levels. On the one hand, some care workers who rely on in-work support will only actually take home a minority of any pay increase, because much of it will be clawed back by the Exchequer. On the other hand, the net cost to the Government of ensuring that all care workers receive the Living Wage would be far lower than the gross cost (due to these lower benefit payments and higher tax receipts). Our previous work estimated the net cost to the public purse of paying the Living Wage to care workers to be just under half of the gross cost.[v]

Importantly, the benefits of raising pay in care are likely to extend beyond the care workforce. Evidence suggests a link between the pay care workers receive and the service delivered. Higher job satisfaction as a result of better pay can improve attentiveness and facilitate high-quality, compassionate care. And better pay tends to increase staff retention and reduce absenteeism. These outcomes are particularly important in ensuring the quality of care services given the importance of continuity of provision.

There is currently a growing debate about the social changes that will be needed in the wake of coronavirus. Some of these are long-term and complex – not least a long-awaited overhaul of the funding system for social care in England. But others, like ensuring care workers receive a decent wage in the here and now, are not technically especially challenging. We are talking about relatively simple choices that require political resolve and the requisite funding.

Ensuring that all care workers receive at least the real Living Wage, alongside a modicum of job security and predictability in their working hours, should have been a priority long before any of us had heard of coronavirus or clapped on a Thursday evening. Putting this right now is the very least we should do.

[i] Our estimates come from the Office for National Statistics’ Labour Force Survey for 2017-2019. A sector-specific dataset from Skills for Care produces somewhat higher estimates, suggesting that there are 1.2 million jobs in the provision of ‘direct’ care in England.

[ii] The real Living Wage is calculated by the Resolution Foundation and overseen by the Living Wage Commission.

[iv] Our figure of £1.4 billion likely now represents an upper estimate, given that the introduction of the National Living Wage has significantly increased the pay of the lowest-paid care workers. A growing workforce and rising real Living Wage rates will have pushed in the other direction, however.

[v] This estimate is sensitive to pressures in both directions. We do not account for increased consumption as a result of higher pay (by a low-paid group more likely to spend), which might boost VAT receipts, for example. On the other hand, there may be downside fiscal effects from a real Living Wage in care. For example, higher wages may create inflationary pressure, which would imply higher benefit spending and higher index-linked debt interest. That said, because we are only talking about a pay uplift in one sub-sector of the economy, inflationary pressure is likely to be much more limited that that associated with minimum wage increases, for example.

Who cares?
The experience of social care workers, and the enforcement of employment rights in the sector
26 January 2023
·
Nye Cominetti
Constrained choices
Understanding the prevalence of part-time work among low-paid workers in the UK
30 November 2022
·
Louise Murphy
Policing prejudice
Enforcing anti-discrimination laws in the workplace
8 November 2022
·
Hannah Slaughter
Back to top