This morning the ONS published the Annual Survey of Hours and Earnings (ASHE) for 2019 – the most detailed data on employee pay available, telling us about high and low pay, the gender pay gap, and more besides. As a think-tank focusing on raising living standards, this is pretty crucial data for us, and for the country’s 30 million workers. Here are our five key takeaways:

Pay growth was healthy in 2019

2019 has been a good year for pay (so far!). The headline Average Weekly Earnings series gives data up to August, and shows that real growth in average weekly pay strengthened through the year, settling at a healthy 2 per cent over the summer.

However, given our concerns about the ‘squeezed middle’, we care at least as much about typical (median) pay as average (mean) pay – the latter can be skewed by high earners. This is where ASHE comes in – and with more good news. Real growth in typical hourly pay (excluding overtime) was 1.9 per cent in 2019, much improved on the 0.1 per cent growth recorded in 2018 and 2017. This is more or less back to the growth we were used to before the recession (growth averaged 2 per cent between 2000 and 2009). Growth in typical real weekly pay was similarly strong in 2019 at 2.1 per cent, again much improved on the previous two years. 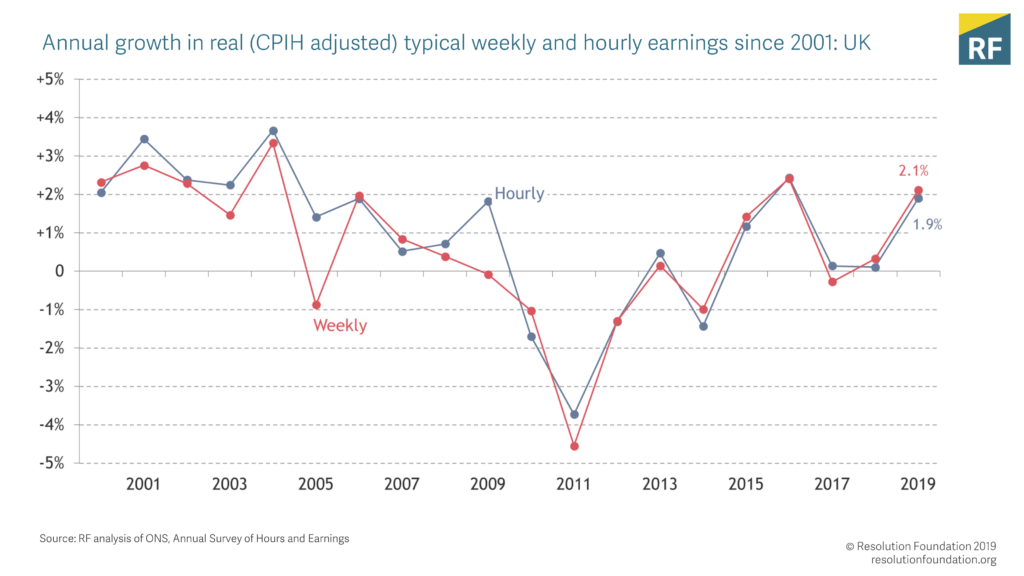 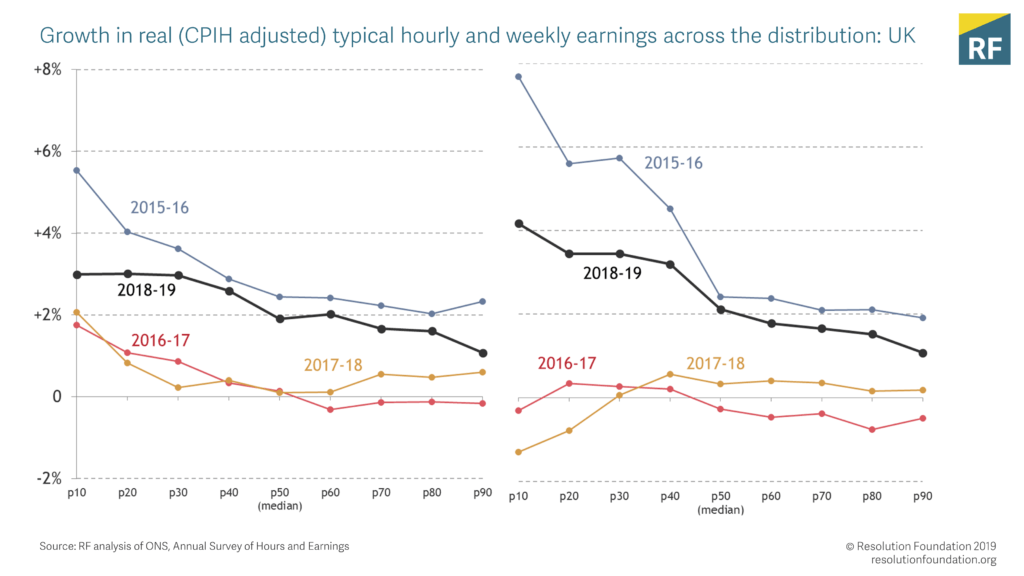 Pay inequality fell this year – though it remains high

This progressive shape to earnings growth means that 2019 was a good year for pay inequality, at least as measured by the ratio of earnings at the top (90th percentile) and bottom (10th percentile) of weekly earnings. The 90:10 ratio fell by 3 per cent this year. Of course – this is not to detract attention from the fact that the level of pay inequality is very high. On an hourly basis, which takes out the effect of weekly hours worked, the 90th percentile earn 3.5 times the wages of those at the 10th percentile. On a weekly basis, the 90:10 ratio is almost twice as big (6.7).

A further effect of strong pay growth for low earners is in the proportion of employees classed as being in low pay, defined as earning less than two thirds of median hourly pay. In 2019, 16.2 per cent of employees were low paid on this measure, down from 20.5 per cent in 2015, the year before the ‘National Living Wage’ (the higher minimum wage for those aged 25+) was introduced.

So far we have focused on the latest data, which is encouraging. Casting our eyes further back suggests a less positive story. After accounting for inflation, median weekly pay is still £9 below its 2008 peak. 10 years on, the country’s pay packets still haven’t recovered from the recession. And as is well established now, the impact of the recession was most keenly felt by young people. In its immediate aftermath, it was the pay of those in their 20s that was hardest hit. Today, it is the wages of those in their 30s that still lags furthest from its previous peak. Median weekly pay for workers in their 30s in April 2019 was £502, £38 lower than the level in 2008. The 30-somethings of 2019 would have been in their 20s in the aftermath of the recession. This suggests that the young people whose pay was hit hardest by the recession (many of whom will have now aged from their 20s into their 30s) are still feeling the effects of that period in their pay packets today. 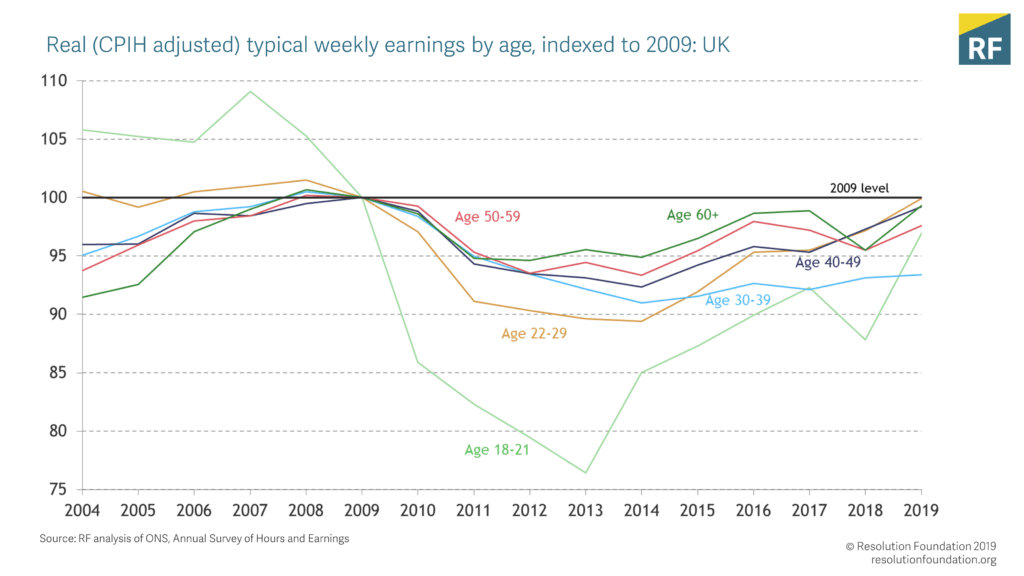 The gender pay gap has fallen slowly, and only on some measures

There is some positive news on the gender pay gap, which continues to fall, albeit slowly. In 2019, the hourly pay gap for all employees was 17.3 per cent, down from 17.8 per cent in 2018. The downwards shift was mainly driven by strong pay growth for full-time women in their 40s. 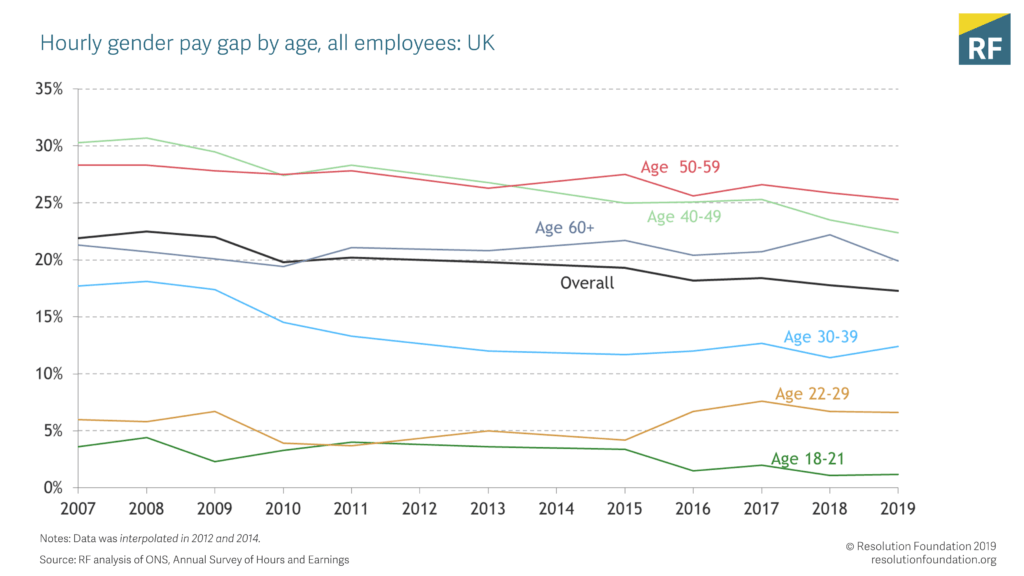 Stepping back from these statistical oddities, it is clear that further action to close the gender pay gap needs to take into account the highly gendered nature of caring responsibilities and therefore part-time work.

In summary, 2019 has been a good year so far pay – and long overdue too given the earnings disaster of the last decade. But while the strong pay performance for the lowest earners vindicates the ambition of both main parties for a higher minimum wage, more work will be need to get everyone else’s pay packets beyond where they were before the crisis.

Who cares?
The experience of social care workers, and the enforcement of employment rights in the sector
26 January 2023
·
Nye Cominetti
Costly differences
Living standards for working-age people with disabilities
4 January 2023
·
Omar El Dessouky, Charlie McCurdy
Constrained choices
Understanding the prevalence of part-time work among low-paid workers in the UK
30 November 2022
·
Louise Murphy
Back to top