Yesterday started with a bleak assessment by the Child Poverty Action Group of the impact of ongoing welfare cuts – specifically how the two-child limit on support, which began to be implemented in 2017, is set to push 300,000 children into poverty. But there was better news for Scottish parents later in the day, as the Holyrood-based government announced a new ‘Scottish Child Payment’ for lower-income households.

At £10 a week per child under 16, for poorer families, that’s £520 a year for one kid, and £1,560 for families with three kids. This is a fairly big deal. For comparison, the UK-wide Child Benefit is currently around £14 a week per child (and £21 for the first child). The policy won’t be fully rolled out until late 2022, unfortunately, but children under six at least will start receiving it by March 2021.

As part of the discussion on how to meet Scotland’s child poverty targets, there has been some reasonable debate about whether the government would opt for a universal payment, or a means-tested one. Given fiscal constraints and the pressing need to support low-income families who are bearing the brunt of ongoing UK-wide benefit cuts, the government has sensibly opted for the latter.

Eligibility for the Payment will be based on receipt of other means-tested benefits, which in the long-term will essentially means Universal Credit (UC). Given the structure of UC – which gets tapered away depending on your earned income, as shown below – this means that a couple with one child (and no rent, childcare or disability costs) would for example be eligible for the Payment up to a post-tax income of around £1,800 a month. 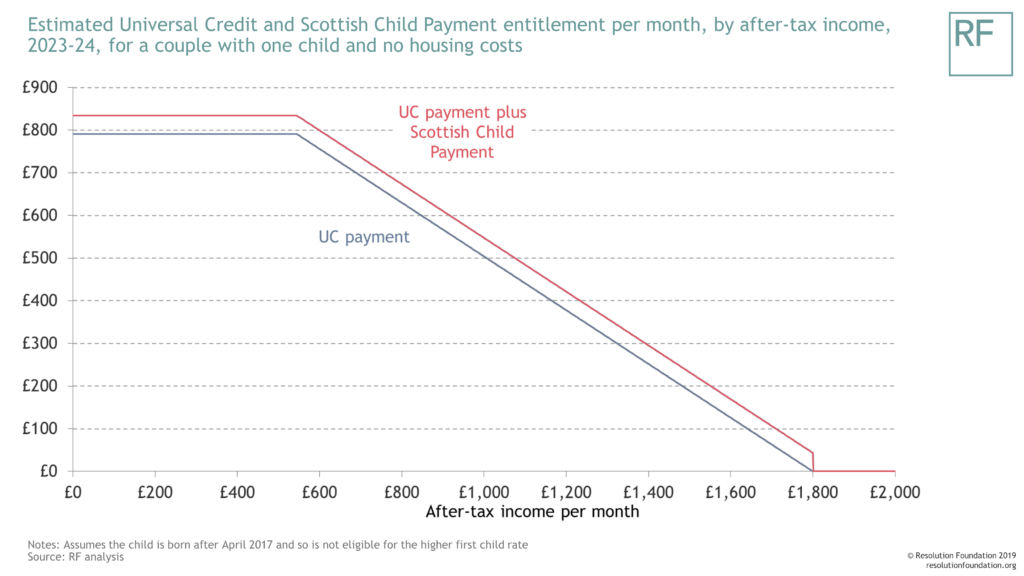 In theory the Payment is almost equivalent to an increase in UC’s per-child element (though without the two child limit). But, while simply using UC to deliver this cash may have been the ideal solution on paper, practicalities and politics mean the new policy will be delivered separately.

This does create a couple of suboptimal features, however. At the limit of UC eligibility – around £22,000 a year in the example above – the new policy would introduce a ‘cliff-edge’, where a £1 increase in income would lose a family £10 a week per child. So working more would not ‘always pay’, particularly for families with many children. For example, a parent with three kids could lose almost £1,600 from a £1 pay rise. The fact that the Payment is separate from UC will also create an extra step for claimants, who will need to actively apply – perhaps reducing take-up.

It’s worth noting that for a family with one child this new Payment is also roughly equivalent to reversing the abolition of the family element of Tax Credits/Universal Credit, which since April 2017 has begun taking over £500 a year from poorer families. And as the new policy has no child limit, it helps undo some of the effects of the UK-wide two child limit, as highlighted earlier, though it is only a fraction of the full cut of up to £3,000 a year per child.

Overall, the new policy is very well targeted at reducing poverty and inequality in Scotland, as the distributional impact below shows. The vast majority (roughly 70 per cent) of the gains will go the poorest thirty per cent of the population. 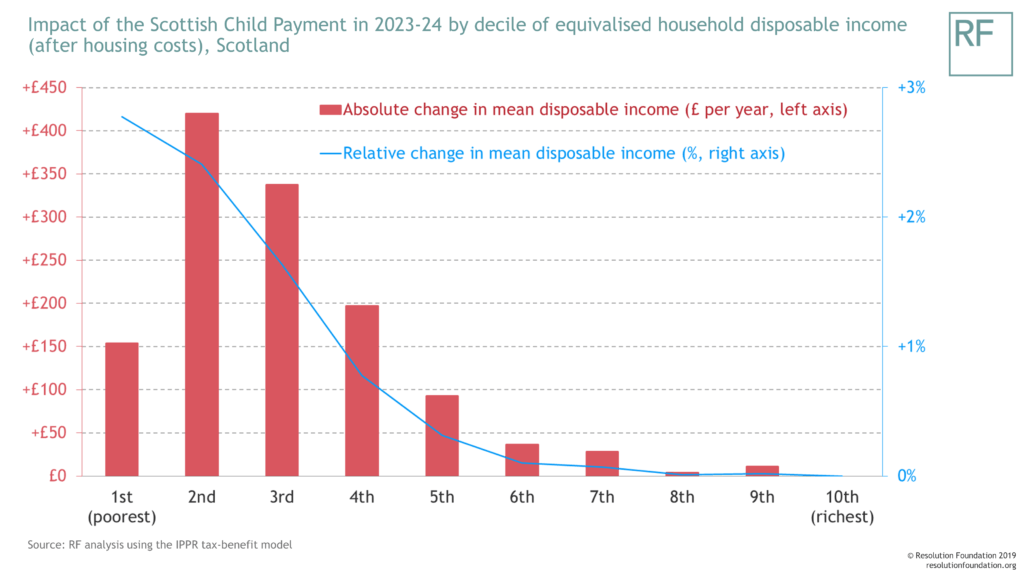 And there is a particular need for the Scottish government to reduce child poverty, given that it is legally required to do so by 2023-24. In 2017-18, 24 per cent of Scottish children were living in relative poverty (i.e. in households with less than 60 per cent of the UK-wide median income). The Child Poverty (Scotland) Act 2017 requires that to be reduced below 18 per cent by 2023-24 and below 10 per cent by 2030-31 (among other targets).

As shown in the chart below, we have previously projected that not only will the 2023-24 target not be met, but child poverty will actually rise rather than fall – driven by UK-wide welfare cuts like the benefit freeze, two child limit and family element abolition.

Yesterday’s announcement is forecast to reduce child poverty by 3 percentage points, or around 30,000 children. On the face of it, this does not look like enough to deliver against the 2023-24 target (let alone the 2030-31 one) – or even necessarily deliver an overall reduction relative to 2017-18 – though other policies such as the Best Start Grants and the overall performance of the Scottish labour market relative to the rest of the UK will matter too. Nonetheless, the Scottish Child Payment is very welcome, and a significant step in the right direction. 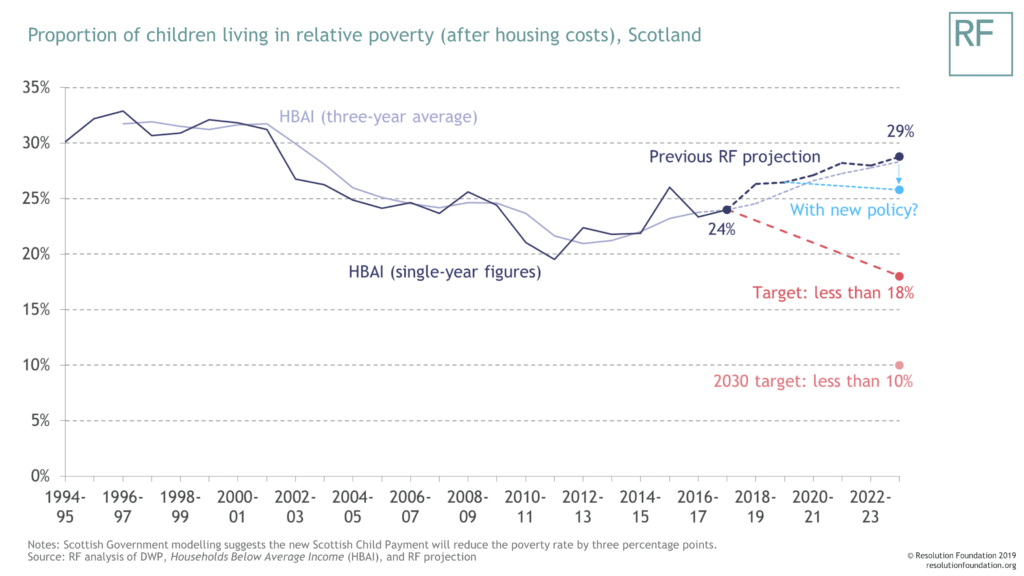 It is interesting to note that if this were a UK-wide policy, the cost would be around £3 billion. This is expensive, yes – but far less so than, for example, spending £10 billion on tax cuts that would only benefit the highest earners, or cutting corporation tax (yet again) to 12.5 per cent (at a cost of £13 billion).

How the Scottish government plans to fund the £180 million policy remains to be seen. But after years of cuts to UK social security, it is a pleasant change to see significant new efforts to reduce child poverty. As we move into a new era of Westminster tax and spending policy, wannabee incumbents of No. 10 and No. 11 should take note.