During the EU referendum, one of Vote Leave’s promises was that “fuel bills will be lower for everyone”. Specifically, Boris Johnson and others argued that:

“In 1993, VAT on household energy bills was imposed. This makes gas and electricity much more expensive. EU rules mean we cannot take VAT off those bills.

When we Vote Leave, we will be able to scrap this unfair and damaging tax. It isn’t right that unelected bureaucrats in Brussels impose taxes on the poorest and elected British politicians can do nothing.”

It is true that within the EU (or more specifically the EU VAT area) we aren’t able to reduce VAT on domestic electricity and gas below its current rate of 5 per cent (compared to the standard rate of 20 per cent) – though it was the UK government, rather than the EU, that “imposed” the tax in 1993.

So, with spending promises and tax cuts very much the flavour of the month, it’s possible that the new Johnson premiership will (re)promise this tax cut at some point. But – beyond short-term politics – is it actually a good idea? To help explore that, here a few alternative options that parties could consider:

1) Give money to those in poverty

Beyond demonstrating that some things are possible post-Brexit that weren’t before, what is the goal of the policy? Based on the statement above, it seems like the goal is to help the poorest. And of course the tax cut would help to some extent. But it’s not exactly well-targeted. As the chart below shows, the tax cut would help poorer and richer households fairly equally, with the richest tenth actually gaining the most in cash terms – as they use the most electricity and heating. 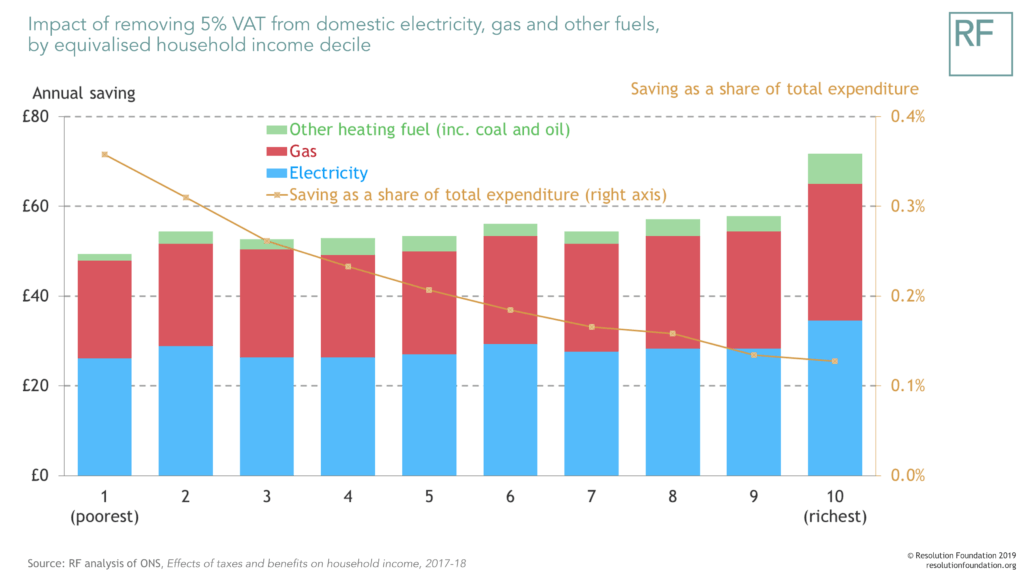 The chart also shows that the policy would not have a huge impact, with an average gain of around £60 a year per household. That shouldn’t be too surprising. As VAT is already only 5 per cent, reducing it to zero would cut after-tax prices by only 4.8 per cent (5 over 105). However, the tax cut would cost around £1.6 billion a year (using either HMRC figures, the chart above or average fuel bills), which is serious money.

The distributional pattern above is actually very progressive compared to most other tax cuts, which tend to be regressive in proportional as well as absolute terms. But if politicians want to distribute £1.6 billion a year with poverty-reduction motives in mind, then doing so on the basis of need rather than energy use would be more sensible. Indeed, they could reverse any of the multi-billion pound welfare cuts implemented over recent years, many of which have taken hundreds of pounds a year away from poorer families. For example, the abolition of the ‘family element’ alone is taking away £545 a year from every lower income household with kids, and reversing this (at lower cost than the tax cut) would be a far more cost-effective way to reduce poverty.

Of course, cutting energy taxes may be more politically popular than increasing benefits. But, from an economic perspective, cash support also has the advantage of being potentially less distortionary than fuel subsidies. Making the tax system more favourable towards energy use would be a particularly odd choice when the government is trying to reduce net greenhouse gas emissions to zero (or less) within 30 years. In fact, there is a strong case that the optimal policy (in the complete absence of politics) would be to increase energy VAT to the standard rate, as Norman Lamont wanted to as Chancellor in 1993 (ostensibly on energy efficiency and climate change grounds), and target the extra revenue on reducing poverty.

If the aim is specifically to reduce people’s energy bills, then again there may be better alternatives. In 2014 and 2015, the Coalition used a ‘Government Electricity Rebate’ to reduce bills. This was essentially just £12 taken off each household’s bill, at the Treasury’s expense. So something very similar to abolishing energy VAT could be achieved already, if it was seen as a good use of funds.

An important benefit of reducing bills in this way is that it would reduce the overall cost of energy without reducing marginal costs. That would be a good thing when we’re trying to reduce electricity and gas use. In contrast, reducing marginal energy prices by 5 per cent (by cutting VAT) might increase the UK’s domestic electricity and gas use by, say, 1 per cent (given a plausible elasticity of 0.2 from the literature).

Another way to reduce bills, and one with far more potential, is to improve energy efficiency. Improvements in white goods, boilers, TVs, lights and more have already had a big impact. But there is far more to be done, particularly when it comes to insulation. The UK reportedly has “one of the least energy efficient housing stocks in Europe”, as well as the oldest. As the Climate Change Committee (CCC) says, “energy efficiency retrofit of the 29 million existing homes across the UK should now be a national infrastructure priority.”

A look at Energy Performance Certificate (EPC) bands in England and Wales gives a sense of just how much work needs to be done to move the nation’s housing stock into Bands A-C or even A-B over the 2020s. 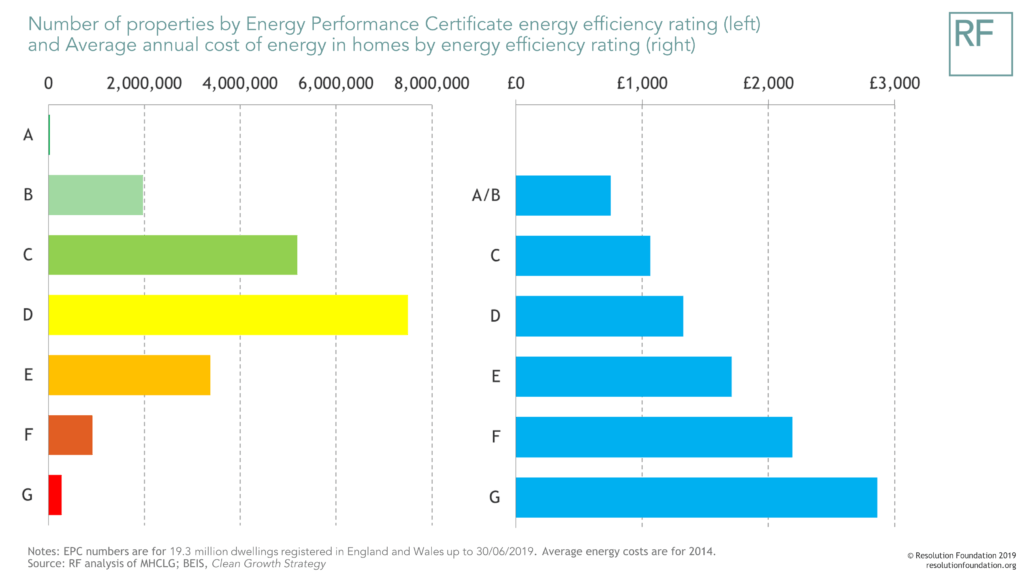 But, as the right-hand chart shows, improving our homes would bring big benefits. Going all out on energy efficiency could ultimately reduce consumption by more than half, while more limited change could still cut bills by a quarter – an average saving of £270 a year – by 2035. For many homes, adding solar panels can further reduce bills by hundreds of pounds a year. And of course such options would mean greenhouse gas reductions too: unlike a VAT cut.

At least some of this huge transformation should be publicly funded – particularly for poorer households and the social housing stock – and this may be a better investment than a VAT cut.

4) Cut VAT on electricity but not gas and other fuels

Together with improving energy efficiency and cleaning up the electricity supply (which is going relatively well), a critical pillar in reducing emissions is now to “electrify everything”. That means replacing vehicle fuel, gas (and oil and coal) heating, and gas cooking with electricity.

In the 2020s, the UK needs to shift from electric vehicles (EVs) being rare to being the only vehicles sold (ideally by 2030 according to the CCC). The CCC reckons EVs will be the cheaper option anyway by the mid-2020s, even without considering taxes and subsidies, but every lever that can accelerate this is welcome. So there is perhaps an environmental case that zero VAT on electricity – while ideally not freezing or cutting fuel duty again – would be somewhat helpful. (Though reducing the relative up-front affordability of EVs might be a better priority, given that they’re already considerably cheaper to run than fossil fuel cars once purchased.)

The same positive case can’t be made for cutting tax on domestic gas, coal or fuel oil. The government has already said that new homes shouldn’t even be connected to the gas grid from 2025. For everyone else, we need to be moving rapidly from gas ovens/hobs to electric ones and from gas boilers to electric heat pumps (or other zero-carbon alternatives). So cutting tax on gas isn’t really defensible from a future-of-the-planet or local air pollution point of view. If anything, politicians should be talking about gradually increasing the tax rate for domestic fossil fuels, as and when heat pumps (coupled with great insulation) become a more affordable replacement for gas boilers. For a more environmentally defensible position, the government could argue for 0 per cent VAT on electricity but a maintaining of the 5 per cent rate on gas and other domestic fuels. That would help the coming transition to low-carbon forms of heating, as well as to EVs. It would also lower the cost of the VAT cut: halving it to around £800 million (though this cost could be expected to grow in the long term).

5) Cut VAT on electricity but raise the carbon price

In a similar vein, might it be possible to cut tax on electricity produced from zero-carbon sources but not from fossil fuels? This would work by increasing taxes on coal and gas power plants through some form of carbon price.

The UK actually already has two carbon prices. One comes from the EU Emissions Trading Scheme (ETS) – the world’s largest carbon market. The other is a back-up called the Carbon Price Floor. (Note that neither applies to domestic gas use, which is another reason to avoid cutting domestic gas VAT.) What would happen post-Brexit remains to be seen, but the CCC recommends the UK maintain a carbon trading system linked to the EU ETS, with – essentially – a rising price as we approach 2050 to reflect the net zero goal and interim targets.

Potentially, the UK could cut VAT on domestic electricity (and perhaps insulation, solar panels, heat pumps etc. too) while also stepping up its carbon price ambition. This would limit the latter’s impact on consumers but help to first ensure the final few coal plants close, then support a switch away from (non-carbon-capture) gas plants and ultimately promote ‘carbon capture and storage’ and direct removal of CO2 from the air.

So should the UK cut VAT on energy?

There doesn’t seem to be a logical case for giving domestic gas, coal and oil a tax cut at a time of rightfully high public concern about climate change. But writing this piece has changed my mind somewhat about electricity taxation. Cutting VAT on electricity is not a cost-effective way to help the poorest, but it is far more progressive than most tax cuts. It would further distort consumer spending towards domestic energy use (and risks being only one of many new VAT gimmicks) but by itself it would be a relatively small change. And it could help consumers make the transition away from fossil fuel powered transport, heating and cooking – though from a green perspective it would ideally need to be part of a coherent package of changes including insulation investments; a strong carbon price; not cutting fuel duty; VED reform; a 2030 new petrol/diesel vehicle ban; and more.

In or out of the EU, the government has many options to help the poorest, including lowering energy bills directly if it wants to. If or when Brexit happens, there is a case for lowering VAT on domestic electricity (but not gas) but it does not seem an obvious priority from a poverty, economic or environmental point of view.