Today, the Chancellor announced a hugely welcome and unprecedented pledge to pay 80 per cent of the wages of employees without work to do in struggling firms – a crucial step change in the government’s economic response to the current crisis.

The Chancellors intervention was profound but necessary, as the current crisis is causing a huge and sudden shock to our economy, and one that is concentrated on lower earners.

Lower-paid workers are most at risk of job losses as they are concentrated in sectors directly affected by the social distancing measures, such as retail (excluding supermarkets), hospitality and tourism. Around 430,000 firms, employing 4.7 million employees, work in these sectors. 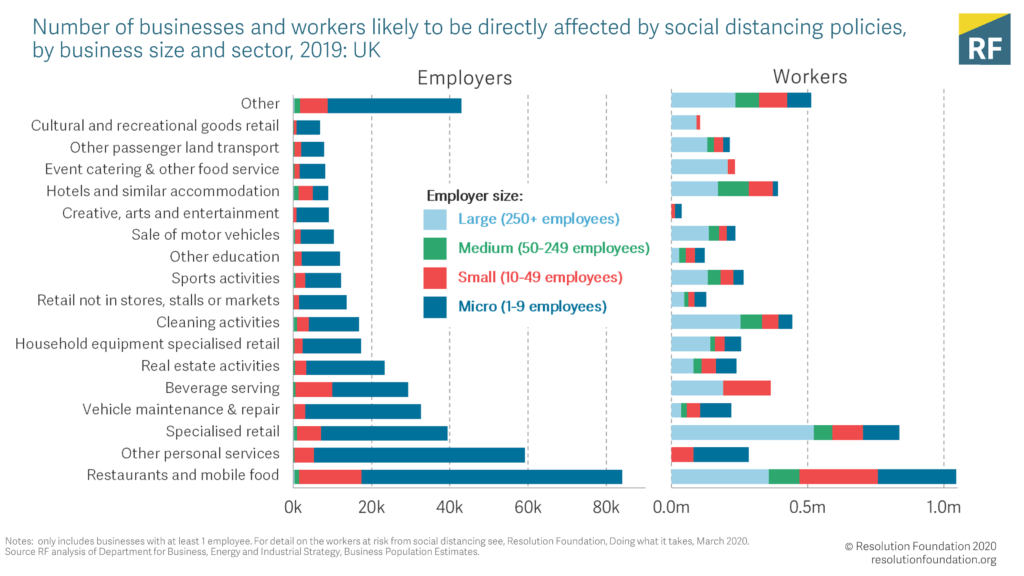 In addition, around 3.5 million employees also very likely to be affected by the closure of schools and nurseries. 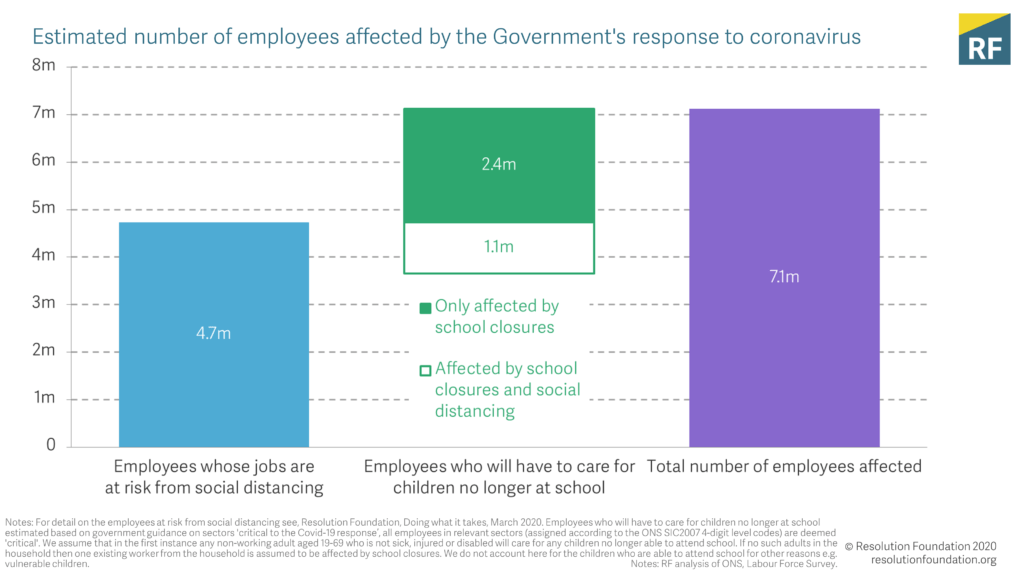 The most striking announcement was the Chancellor taking forward the Resolution Foundation’s proposal for a new Statutory Retention Pay scheme, paid at 80 per cent of an employee’s previous wages, up to a high cap of £2,500 a month (above typical earnings).

While the cost ultimately depends on how many firms take up the scheme, and for how long, we estimate that should the scheme support one million employees it would cost around £4.2 billion over the initial three-month period the government has set out it will run for. 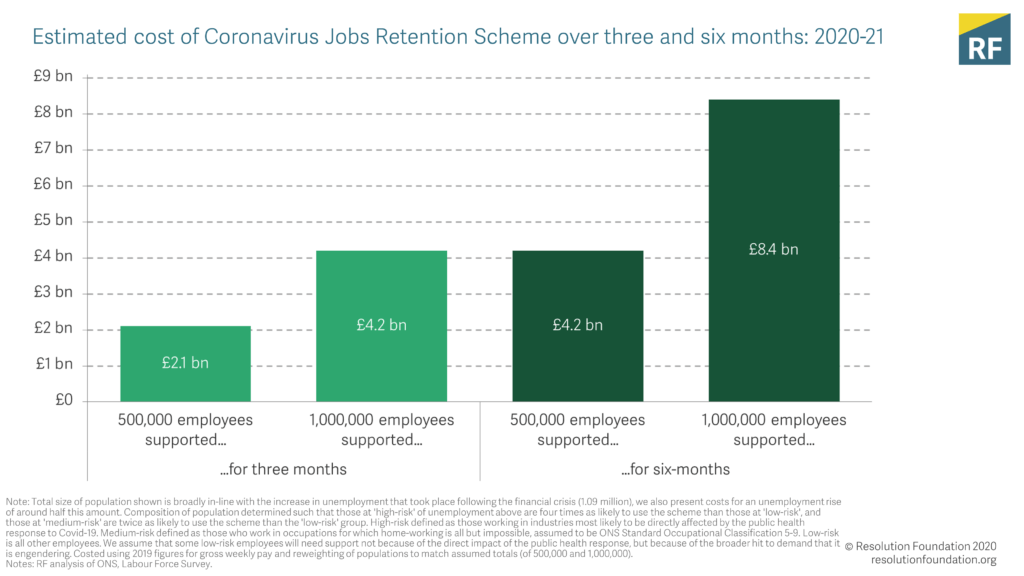 This scheme is hugely welcome because it will ensure that staff keep getting paid, and remain on the payroll. This will give workers and firms more certainty about how they will get through the months ahead, reducing wage bills for firms and easing the income shock for families.

As well as helping the individual workers concerned, it will also reduce the scale of the coming recession by reducing falls in consumption that cause wider economic damage. Critically, such an approach focused on retaining workers will also help firms to recover quicker once the worst of the crisis is over.

The Chancellor also announced a big – and thoroughly welcome – strengthening of the UK social security safety net that many more people will need to rely on in the coming months. This includes a substantial £20 a week (£1,000 a year) increase in the value of unemployment support, taking it to its highest real-terms value ever, after two decades of stagnation or declining value. This move will benefit four million families, and is part of £6 billion increase in benefit spending. 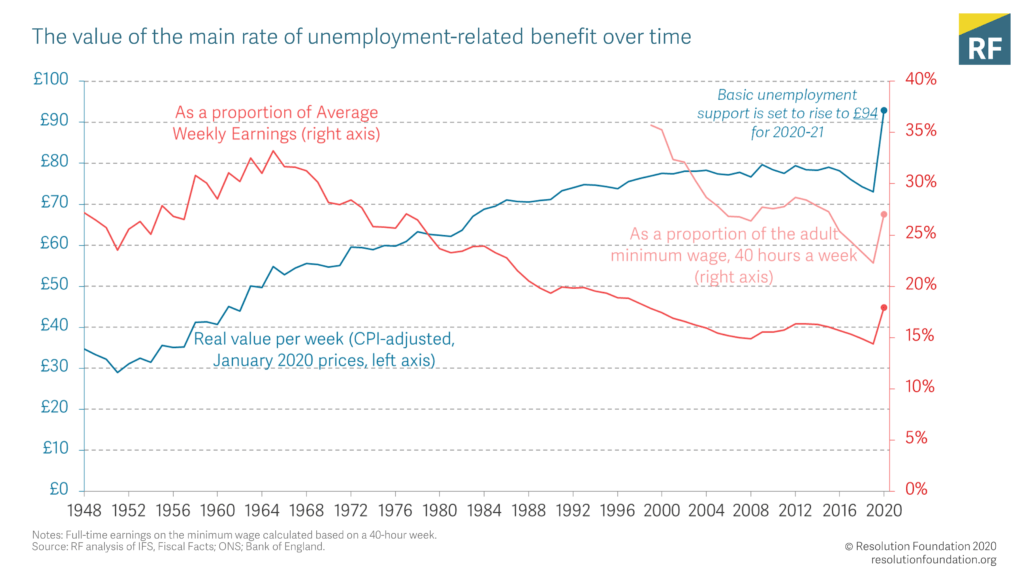 An increase in housing support, costing a further £1bn, will help renters by undoing the cuts since April 2012, restoring the link with rents in the local area.

These are big, bold measures. But more is needed still. The big gaps that remain in support are for the two million low earners that are not entitled to Statutory Sick Pay, and for the self-employed seeing work dry up because of the crisis. Some, but far from all, self-employed workers will at least benefit from the abolition of the Minimum Income Floor in Universal Credit.

Britain is in the midst of a profound economic shock, and unprecedented times call for unprecedented measures. That is what the Chancellor has committed to.

The measures announced will help stem the rise in unemployment, and strengthen the safety net for those who do lose their jobs.

Two challenges remain. First, there are still very tough times ahead for those who will face big income falls as they become unemployed, or in the case of the many self-employed seeing their work dry up.

And even more critically the benefits of this retention need to become a reality. The onus is now on firms to halt job losses, and for the government to get their bold scheme operational as soon as possible.

Tough times still ahead for our economy. But we have ended the day in a far better position to fight the crisis than we started it.