But beneath all the madness has anyone else noticed a strange pattern emerging from British politics? In the olden days one lot wanted X (eg tax cuts) and the other lot wanted Y (eg tax rises). They had a row and whoever won got their way. But in politics today both want X and neither get their way. Both big parties wanted Brexit with a deal in 2017 – and you may have noticed that kind of hasn’t happened. Now they both want a General Election… but a date for voting we do not have. At least they can agree on one thing – to spend a lot more money.

In totally unrelated news, this week’s reads remind us that our leaders’ words matter. And that we lie….

Now turn off the BBC Parliament channel and have a great weekend.

Everybody lies. I hope you’re ashamed of yourself. Most of us should be apparently. New research shows that when we’re given the chance to lie in a simple task, we mostly do – and justify our dishonesty by convincing ourselves that everyone else is at it. It doesn’t seem to matter whether we think lying is bad or not – as the paper says “honest behaviour is a strong indicator of disapproval of lying, but disapproval of lying is not a strong indicator of honest behaviour.” What we believe, and how that effects the real economy, was a hot topic of discussion at RF on Tuesday, when Nobel-prize winner Robert Schiller discussed his new book Narrative Economics: How Stories Go Viral and Drive Major Economic Events. You can catch up on it here.

Economists at War. Economists often purposefully exclude the war years from their research, mainly because the chaos has a nasty habit of messing up your charts (as well as everyone’s lives, obviously). But this leaves rather big gaps in the study of economics, which is why a new radio series and set of articles on the economics of the Second World War are definitely worth your time. There’s lots to learn, among them that inequality generally fell in the war years, with the wealth of the top 1 per cent down by an average of one third compared to their pre-war share in countries at war. War not only destroys the capital the rich own, but leads to surges in taxation and nationalisation. We do of course need to reduce inequality, but I’m hoping it won’t have to come to this.

A welfare state works. That’s the conclusion from a recent paper on the rollout of the Food Stamp Programme in the 1960s during the US’s War on Poverty, which finds it had positive and long-lasting effects. Female children who were in a county in which food stamps were available from the ages of 0-5 had 3 per cent higher earnings by the age of 32. Fifty years on and on the other side of the Atlantic, the research feels especially pertinent in the Britain today given that RF research has found that more than one in three children born here between 2016 and 2020 are expected to be living in poverty at the age of two.

Short-sighted tattoos. Everyone’s got a tattoo these days – you almost feel socially excluded without a butterfly on your back, or I ❤ JC/BoJo on your thigh. Which is odd given evidence that tattoos lead to discrimination – not least over jobs. So why do people get them? Fun new research (free version and news write-up) finds that “those with tattoos, especially visible ones, are more short-sighted and impulsive than the non-tattooed.” This research finding is true irrespective of the reason given for having a tattoo. You’ll be glad to know the work shows that it’s the short-sightedness causing the tattoos, not the other way around.

Longer commutes or just more congestion. Can you spend longer in traffic jams but not more time commuting? The answer is yes, according to this response to a new report on congestion in Texas. While the number of hours spent in traffic delays by commuters has tripled since 1982, the average commute has only grown by an average of 10 per cent. The reason? Urban sprawl means that not only do commuters move to the suburbs, but their jobs have followed them. So shorter commutes but more of it in traffic jams. Of course in places where geography or policy limits the sprawl (San Francisco or quite a bit of the UK) commutes do indeed get longer – as we investigated last year. This commuting stuff is well worth your attention – it affects lots of other things, including the gender pay gap as a useful ONS note this week reminded us. Women sacrifice pay for a shorter commute after having kids. Men? Not so much.

Words matter, something lost on a participant or two in last week’s political fandango. We’re not debating our opponents – we’re calling them surrender monkeys or fascists.

Jacob Rees-Mogg rightly apologised for equating a doctor disagreeing with him over Brexit with Andrew Wakefield’s false linking of vaccines to autism. Boris Johnson didn’t apologise for calling Jeremy Corbyn a “great big girl’s blouse”, but did at least make his “denigration via feminisation” policy cross party: David Cameron is, apparently, a “girly swot”.

Things are a whole lot worse in the US, especially when it comes to the issue of race. For two centuries American politicians have sought to fashion national unity from a truly diverse population. But how does the language that leaders use affect how Americans feel about their overlapping ethnic and national identities?
New US research takes on this tough question. Focusing on whites and Latinos, it reaches some challenging conclusions. The first is that politicians’ words matter – they really do change attitudes.

The quickest way for politicians to tap into the national identity of white people? Rhetoric portraying ethnic and national identity as in conflict (hello Donald Trump). Depressingly, this has little effect on many Latinos, who have got used to it.

But there are challenges, too, for politicians wanting to engage Latinos in national unity. Simply celebrating diversity doesn’t work – only arguing that Latino identity is compatible with American identity does.

We are all from diverse backgrounds but share a sense of national attachment, yet even well-intentioned politics needs to recognise that different groups respond differently to the same rhetoric. So choose your words carefully.

Chart of the week. You might have missed it amid the chaos in Westminster, but the spending taps were turned back on this week. Big time. Wednesday’s Spending Round was only setting out public service spending for one year rather than the normal three, but it was still a big deal – with departments getting a £13.8bn (4.1 per cent) increase next year. As this week’s chart shows (full report here) the Spending Round marks the turning point in a central political and economic debate in Britain ­– bringing to an end to (but obviously not reversing) the austerity era of unprecedented public spending restraint of the past decade. The Chancellor also decided to bin his fiscal rules along with austerity – British politics is well and truly over its caring about the deficit phase. 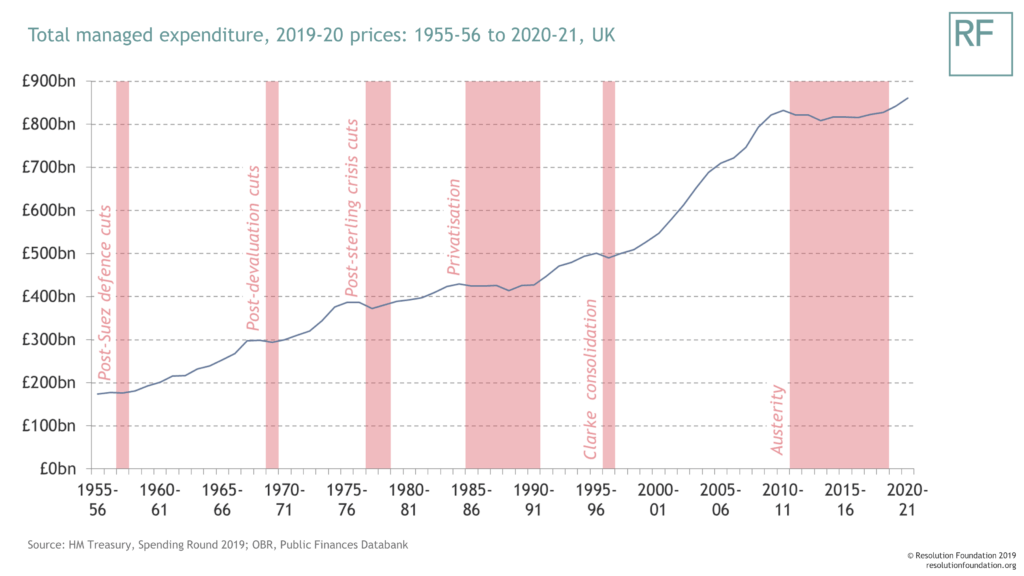