Today’s labour market data show both the supply of and demand for labour falling. On demand, vacancies continued to fall from recent peaks, while the employment rate ticked down. Don’t be fooled by the fall in the unemployment rate, even to a record low.

This is because the fall in unemployed was driven by fewer people in the labour force, due to an increase in students (potentially a good thing) but also long-term sickness (a very bad thing).

Meanwhile, while real pay isn’t yet growing, the rate at which it is shrinking may have bottomed out. So pay packets are still shrinking in real terms, but they are not shrinking any faster.

Demand and supply both weaken

Unemployment fell to 3.6 per cent in the three months to July – the lowest rate since 1974. But don’t let this eye-catching figure fool you. Labour demand – defined as employment plus vacancies – has continued to fall (see chart). This is not too surprising, given the weakening in the business and employment surveys and the bumpy plateau in the GDP data. And labour demand probably needed to weaken somewhat to bring vacancies and nominal pay growth down to more sustainable levels. (There’s more on pay below). 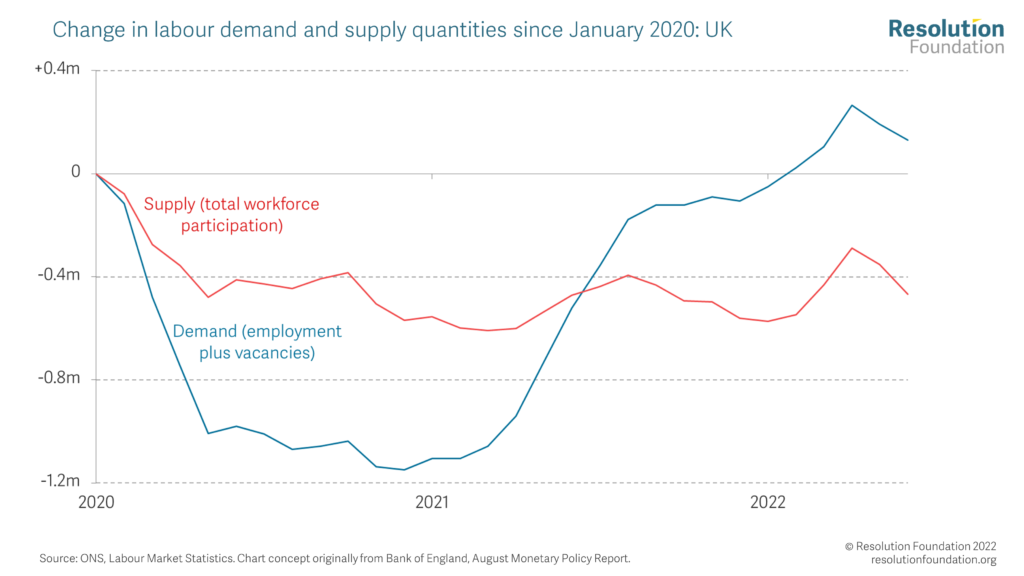 Developments in labour supply, on the other hand, are more surprising and more worrisome. Inactivity rose during the pandemic as people got sick, retired early and/or went (back) to school. Over the early summer we saw these trends going into reverse, and surmised that this could be due to waning health problems, along with a rise in the cost of living forcing people back into the labour force.

This early optimism on labour supply has since been dashed, with 16-64 inactivity having risen for two consecutive months and by over 200,000 workers. As the chart below shows, two of the big drivers are rising student numbers – a good thing in the long run – and rising numbers of long-term sick. This latter development is very worrisome, and could be linked to record NHS waiting lists among other things. 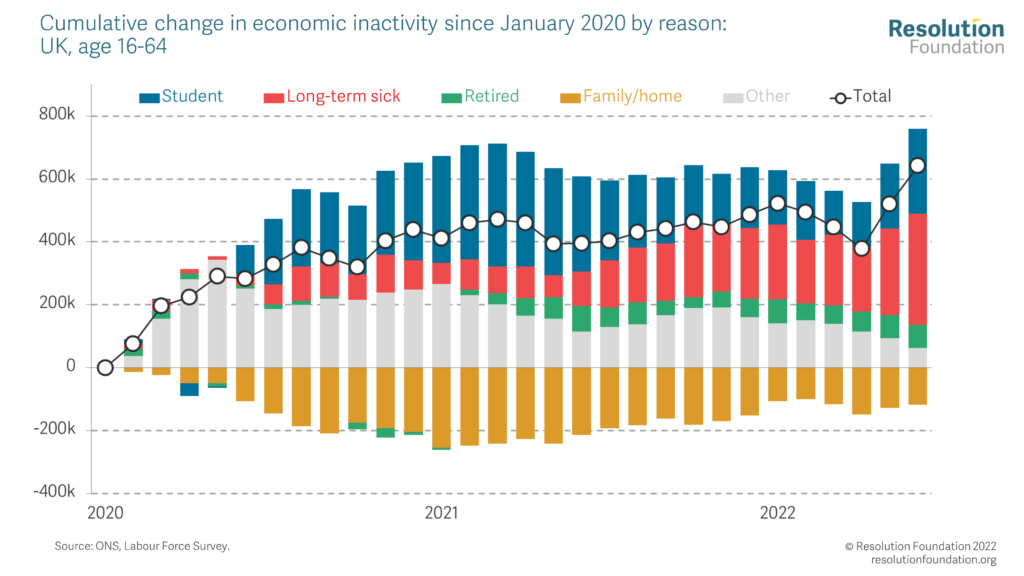 Annual growth in regular pay picked up to 5.2 per cent in the three months to July. The gap with total pay (which includes bonuses) has almost closed. So both series are now giving similar signals about the inflationary pressure coming from the labour market. And this pressure is significant – enough for the Bank of England to keep cooling the labour market with higher interest rates and, eventually, higher unemployment. The pressure looks higher still when we focus on pay growth in the private sector, which more directly determines cost pressures. Private pay is growing at 6 per cent per year, against 2 per cent in the public sector – the biggest gap on record. 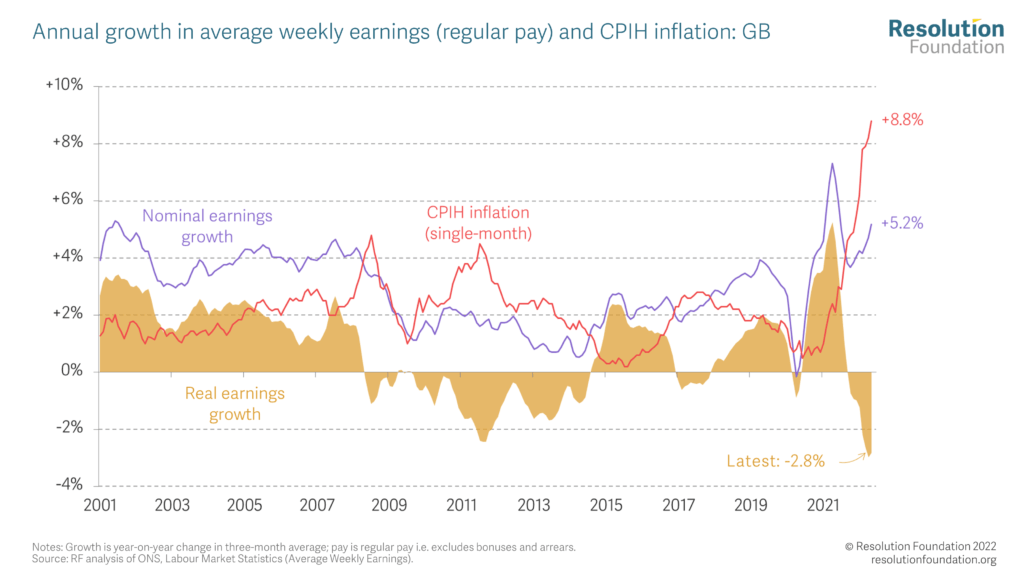 If higher unemployment does come to pass, it will be the end of the last remaining bright spot in the labour market. Higher unemployment will push down on household incomes, joining weak participation, which have just described, and weak real pay growth, to which we now turn.

Real wages are still falling fast, but no faster than last month

Nominal pay may be rising briskly, but consumer prices are galloping ahead even faster. As a result, real pay continues to fall fast – real regular pay fell by 2.8 per cent in the three months to July. This fall is a touch smaller than last month’s record (3 per cent), but still very bad indeed.

Prior to the announcement of the Energy Price Guarantee (EPG – read all about it in today’s report), inflation was set to accelerate further from its current high levels. It is now possible that inflation has instead flattened off – still in double digits, but not climbing any faster. As a result, while real pay will continue to fall over coming months, it is possible that the current terrible rates of shrinkage won’t get any worse. However, once the EPG expires, or no longer binds, workers will be no better off than otherwise, and will face higher taxes to cover the higher energy bills they escaped in the interim. 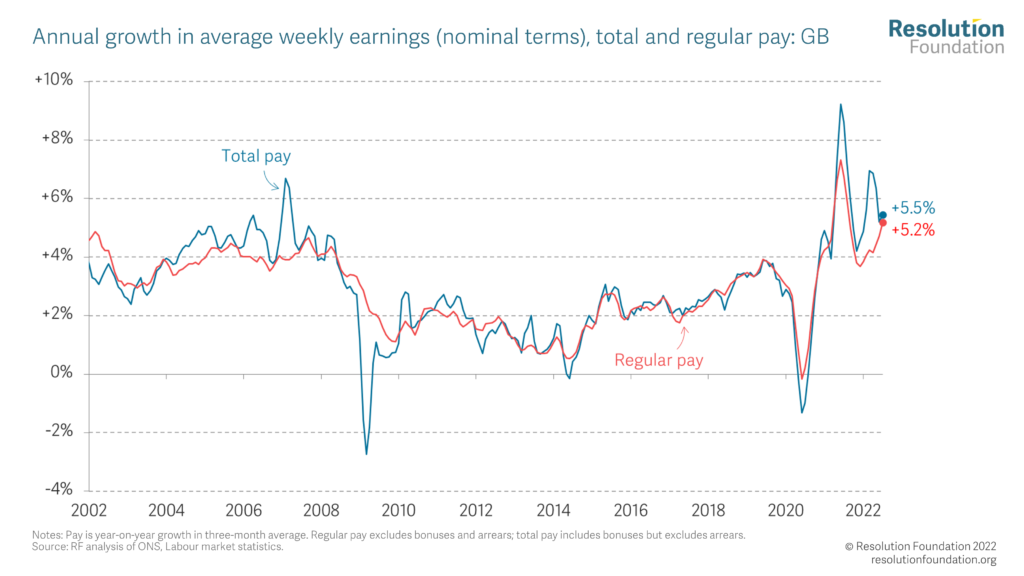 Overall, despite record low unemployment and near-record high vacancies, the outlook for the labour market is bleak. While the EPG will support real wages in the short run, inactivity has been rising and may soon be joined by rising unemployment. Real pay could be lower in 2027 than 20 years earlier – a shocking indictment of the low productivity growth we have seen since the Global Financial Crisis. Read more about where protracted low productivity growth and high inequality have left the UK, and what can be done about it, in the Interim Report of the Economy 2030 Inquiry.